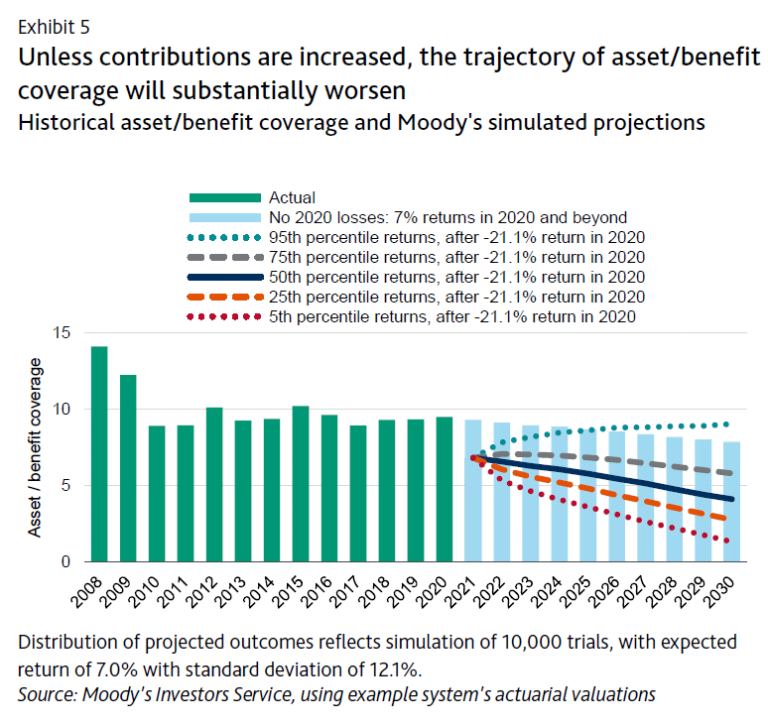 For 2020, pension investment losses could be nearing $1 trillion, according to Moody’s analyst Thomas Aaron. He said this year’s losses will significantly compound the underfunded liabilities currently measured by most public pension funds.

Meanwhile, the economic fallout from the coronavirus is weighing on revenue and threatening to keep government agencies from affording their soaring pension costs. He said the credit impact of the 2020 pension investment losses will depend on a variety of factors. Some of those factors include the severity of the asset declines, each government's funding and cash flow position, and each agency's ability to absorb cost increases in their budgets.

If the markets do not bounce back dramatically in 2020, he expects pension investment losses to soar so high that many state and local governments will see damage to their credit quality. Such damage may be due to already heightened pension liabilities and having less capacity to defer costs.

Aaron estimates that public pension systems in the U.S. are on track for an average investment loss of 21% for the 2020 fiscal year, which for many funds will end on June 30. That's based on a snapshot of market indices from March 20. He selected these indices because they generally reflect asset allocations for public pensions in the U.S.

Because the equity market has been so volatile, he notes that there is a chance for great improvement or even worse 2020 pension investment losses in the next few months. He notes that most pension funds have annual investment return targets in the rage of 6% to 7.5%. That's much higher than interest rates on high-grade fixed-income securities. Thus, he said it means pension assets are heavily allocated to stocks and alternative assets.

Aaron also said adjusted net pension liabilities are on track to skyrocket by almost 50%. This metric indicates the "point-in-time market value of accrued pension benefits (i.e. total liabilities) less the assets set aside to pay for them."

If this same group of pensions ends fiscal 2020 with investment losses of 21.1%, and market discount rates remain where they were in February, adjusted net pension liabilities would reach $3.6 trillion. That's a record high in both nominal terms and relative to covered payroll of participating employees.

Moody's "tread water indicator" reveals the amount governments must contribute to keep their unfunded liabilities from increasing in nominal dollars under reported assumptions. If governments also see their revenue fall, which is a growing risk due to the economic fallout from the coronavirus, pension affordability ratios will also worsen dramatically. This will occur due to the combination of cost increases and stagnation or decline in revenue.

Aaron also said governments will lose the ability to smooth the costs associated with backfilling their 2020 pension investment losses over many years. In fact, their ability to smooth these costs will be more limited with the coronavirus pandemic than it was with the global financial crisis between 2007 and 2009.

He said significantly deferring costs to make up for those 2020 pension investment losses could have severe funding consequences in the long term. He noted that many pension systems have significantly negative non0investment cash flow relative to assets. Aaron attributes that to their underfunded positions and rising benefit outflows as the number of retirees increases.

Non-investment cash flow represents contributions paid into a pension system, minus the benefits and expenses that are paid out. The more negative it is in relation to pension assets, the more it can hold back accumulation of assets in the event of volatile investment returns.

In the years after the 2007- 2009 recession, many governments chose to smooth the costs and backfill their pension investment losses over multiple decades. To do that, they apply asset smoothing and long amortization of losses to the determination of their contribution requirements.

Comparing then and now

Aaron looked at one large public pension system before the last recession and now. Governments that participate in the system contribute about 17% of the payroll, compared to just 12% in 2008. Even though the contribution rate is higher, the system is now more negative in non-investment cash flow relative to its assets before any of the 2020 pension investment losses. It's also just slightly higher in the asset/ benefit coverage ratio than it was during the last recession.

If the 2020 investment losses end up being as bad as the current environment suggests, this system's asset/ benefit coverage will decline to 6.8 years. Its non-investment cash flow will plunge below 6% of its assets. Both of those metrics will market historic lows. 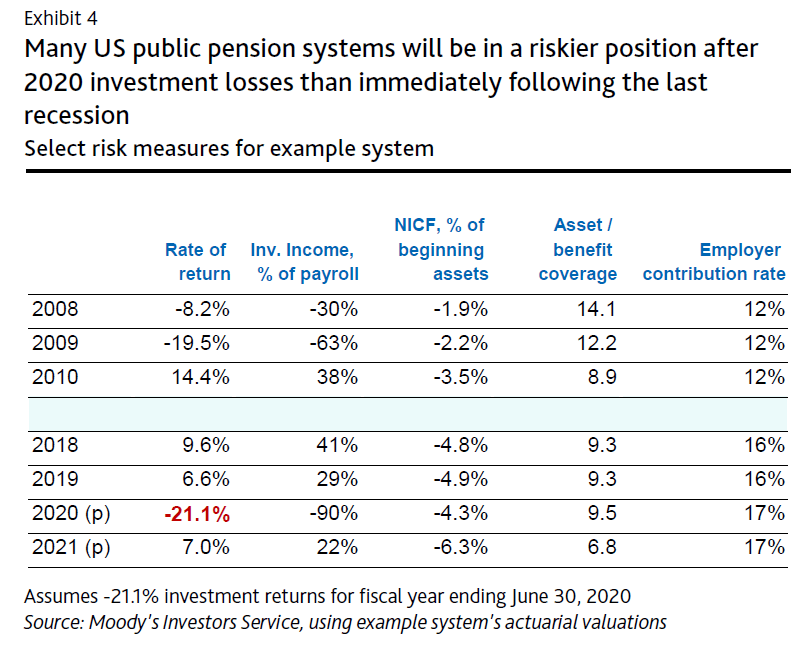 If the governments do not increase their contribution rates, Moody's expects the pension system's asset base to be on a much worse trajectory and predicts it will fall closer to insolvency. 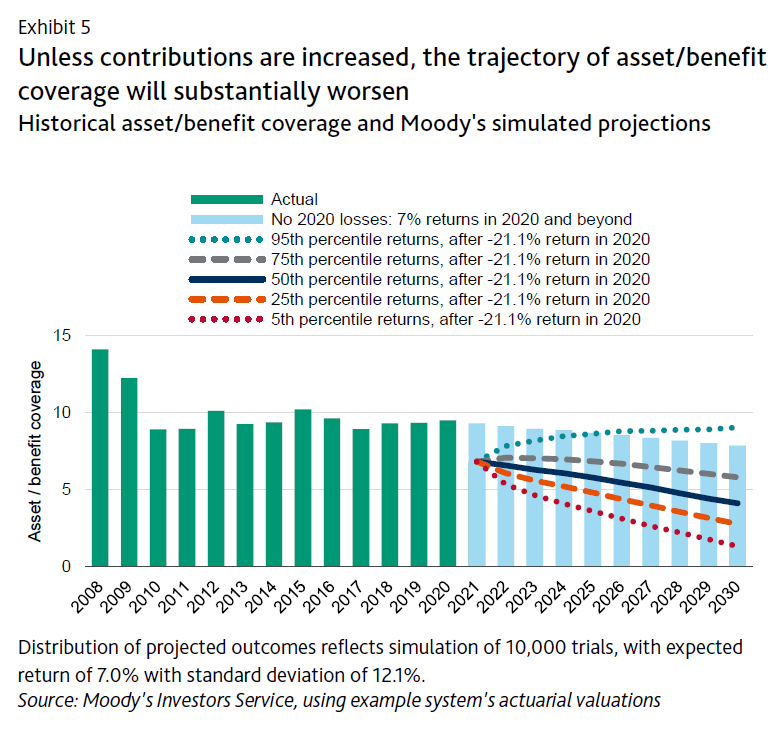 Aaron explained that this indicates that governments' ability to reduce their contributions is now more constrained than it was in the last recession because of the negative consequences that would result from the underfunded condition of the pension system.

"Other options for governments facing rising pension affordability challenges and limited ability to increase revenues could include reductions to service levels, pension benefit cuts (to the extent politically feasible and legally permissible outside of bankruptcy) or in the most severe cases, restructuring of long-term balance sheet liabilities through bankruptcy," he said.