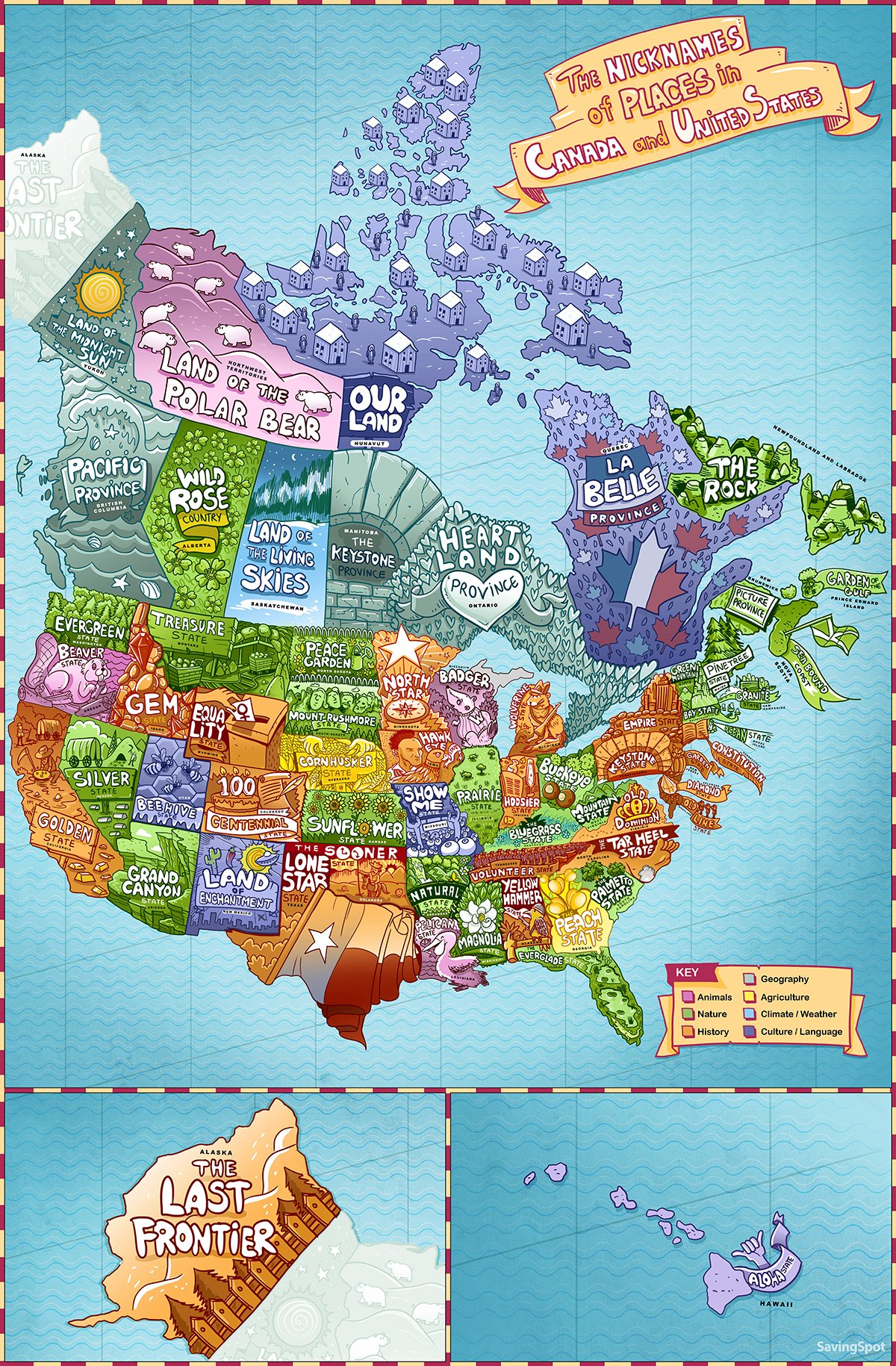 You probably have a few different names for your home town. Perhaps not all of them are family-friendly. Our relationship with the place that we’re from can be as complicated as the ones we have with our family. You can choose your friends and the place you live, but not your family and where you’re from! But nicknames work both ways. They can be affectionate, rude, or affectionately rude. In the case of places, then, sometimes the state itself chooses to step in to provide an official version, even if it is derived from what the people say. But still, a nickname only works if there is a “grain of truth” to it.

In addition to that grain of truth, that sense of the character of a region, a place’s nickname may often feature a historical flavor. You can learn about the inhabitants’ sense of pride, why they chose their area and chose to stay. And in still other cases, it simply isn’t known where the nickname came from – but it must have felt somehow true to have stuck!

The people over at CashNetUSA have put on their research hats to find out a bit more about the nicknames of each state in the U.S. and each province or territory in Canada, and created some zany new maps to represent their findings. There will always be somebody to argue, “that’s not the nickname of my state!” so the researchers made a rule: they discovered the three most popular nicknames for each place, and then chose the best-known or most preferred for each one. They also created a set of categories (history, agriculture, nature, geography, culture/language, animals, and weather/climate) so you can quickly see which states have a nickname theme in common.

For the U.S. map, the team have highlighted the peculiarly American nickname of Indiana. The state is commonly known as the Hoosier State, and people from Indiana are known as Hoosiers – even if nobody knows quite why.

“I don’t know what it is about Hoosiers,” wrote Kurt Vonnegut, himself a Hoosier. “But where ever you go there is always a Hoosier doing something very important there.”

From the 1830s onwards, the name appears in records – in the title of a poem, as the name of a newspaper and a boat, in speeches and diaries – but never any explanation of what it means. Some say it comes from Indiana rivermen’s skill for “hushing” their opponents in bar brawls; some say it is from a Native word for corn, or ‘hoosa.’ Some say it’s named after a businessman named Hoosier who would only hire laborers from Indiana. They became known as ‘Hoosier’s Men.’

“When a visitor hailed a pioneer cabin in Indiana or knocked upon its door, the settler would respond, “Who’s yere?” And from this frequent response Indiana became the “Who’s yere” or Hoosier state. No one ever explained why this was more typical of Indiana than of Illinois or Ohio.”

Utah is known as the Beehive State. But there is no particular prevalence of beehives in Utah, nor is the state’s honey reputed to be more delicious than any other state. As with so many things connected with politics and religion, it can be explained by a misinterpretation.

The Mormons who founded Utah considered the region to be their ‘land of milk and honey’ – as trademarked by the Bible. But you wouldn’t have found many honeybees in the Middle East in biblical times. When God wrote that bit, They were probably thinking about a type of honey made from date fruits.

Perhaps concerned that folk should start to worry there might be more than one modern-day misunderstanding of God’s word, Mark Twain suggested his own take. “The Mormon crest was easy,” he wrote. “And it was simple, unostentatious and it fitted like a glove. It was a representation of a Golden Beehive, with all the bees at work.”

Local newspaper The Deseret News confirmed: “The hive and honey bees form our communal coat of arms. … It is a significant representation of the industry, harmony, order and frugality of the people, and of the sweet results of their toil, union and intelligent cooperation.”

As long as we’re talking about sweetness and intelligence, how have the fine people of Canada nicknamed their places of note?

Manitoba has a particularly noble nickname: the Keystone State. But like so many others, the reasoning behind it depends on who you ask. Some say it’s the shape of the state; some say it’s because Manitoba is at the heart of Canada, making it “the Keystone province in Canada’s great continental arch.”

It wasn’t always such a proud name. When Manitoba first became a province in 1870 it soon became known as the Postage Stamp State. Not because of its advanced postal system, but because it was tiny (1/18th the size of today) and rectangular.

A final highlight from CashNetUSA’s project is the territory of Nunavut. At first glance, the nickname – Our Land – is just a translation from the Inuktitut-language name of the territory itself. But the land was only given official status in 1999, after twenty years of negotiating, after decades of subjugation and disrespect, and after four centuries of indigenous people living on ‘their land’ in the Nunavat region. Not just a nickname, after all!

What’s the nickname of your home province – and what does it mean to you?