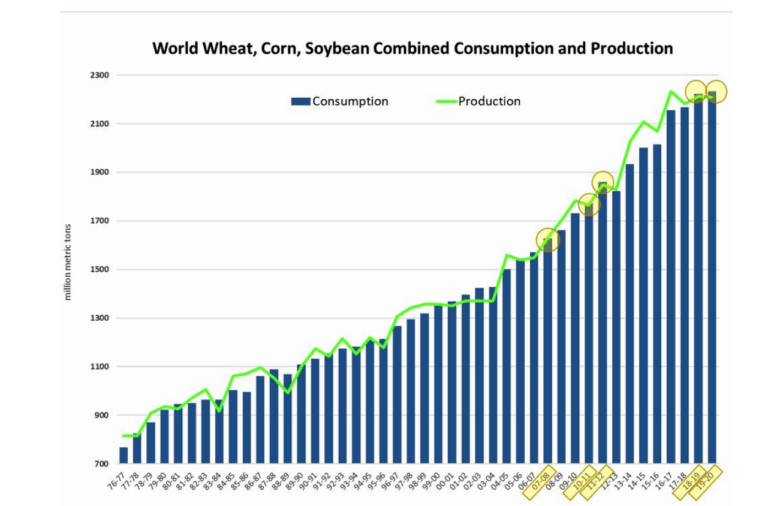 Commodity prices have been up and down this century. The 2000’s were a positive decade, and the last ten years have been negative. Looking forward we anticipate that agricultural commodity prices will experience volatility due to rising global commodity demand and the fact that production has not always kept pace with supply.

We expect geopolitics to continue adding short-term volatility to com-modities markets, however fundamentals will have the longest lasting impact on prices. Furthermore, as we move through the latter stages of the economic cycle, commodity prices may get a boost, proving that his-tory does in fact rhyme. Finally, investors continue to look for assets that have low correlations to equities and provide upside potential. As such, we think the trend will be for more investors to segment their commodi-ty exposure by increasingly allocating to agriculture throughout the next decade.

Maui, the demigod hero from the Disney movie Moana, imparts sage advice saying, “Know where you are going by knowing where you’ve been.”

Crispin Odey's flagship investment strategy, the Odey European Fund, lost - 30.5% in 2020, according to a copy of the strategy's fourth-quarter letter to investors, a copy of which ValueWalk has been able to review. This was one of the worst performances in the fund's history. Since its inception in 1992, it has lost more Read More

Investment professionals are naturally inclined to focus more on the future versus the past. However, understanding the position of the market today, and how it has evolved to this point, can be very useful when con-sidering the future. After all, “History doesn’t repeat itself, but it often rhymes,” Mark Twain.

This Century (So Far) of commodity demand and supply

Increased commodity demand spurred production and put upward pressure on commodity prices, which are natu-rally limited in supply. This should not surprise the market observer who understands that fundamentally com-modity prices are driven by supply/demand dynamics. Equally fundamen-tal is the common wisdom that, “what goes up, must come down.” The finan-cial crisis was devasting for those holding stocks and commodities. While prices rebounded somewhat toward the end of the decade; the damage had been done.

Ultimately, in the ten years spanning from December 1999 to December 2009, commodities outperformed stocks. The S&P 500 price index lost approximately 24%, while the Bloom-berg Commodity index (BCOM) was up over 50%. At one point during the decade however the BCOM had been up over 150%.

“Commodity demand continues to grow, and historically, production has not always been able to keep pace. The two largest disrupters are weather and geopolitics.”

By looking forward and focusing on the fundamentals we expect:

While the 2000’s were kind to commodities and punished equity longs, the opposite has been true this decade. At the time of this writing, with a handful of trading days remaining in 2019, it is safe to say that the 2010’s will be remembered as a decade of the stock market bull.

The S&P is on pace to return more than 170% over the last 10 years. Meanwhile the Bloomberg Commodi-ty index is on pace to lose over 40%. At first glance, the negative perfor-mance of commodities seems odd given that global GDP has grown at a rate of 4% per annum from 2010 through 2018. Increased economic output leads to increased demand, and therefore, should result in higher com-modity prices. Economic growth, however, does not always lead to higher commodity prices and increasing de-mand does not necessarily result in decreasing supply. The simple reason being that high prices provide the in-centive to produce more.

The high prices leading up to the peak in 2008 stimulated production, invest-ments, and efficiencies across the commodity complex. These advances were more than adequate to keep pace with demand during 2010’s. As such, production has often outpaced demand, inventories have risen, and prices have come under pressure.

For the past several years we’ve seen this play out in the oil, natural gas, soybean, wheat and corn markets. Still, commodity demand continues to grow, and historically, production has not always been able to keep pace.

The Fundamentals of commodity demand

The fundamentals are promising. Global population growth along with rising incomes will continue to fuel demand for commodities. We know that produc-tion, however, does not always keep up with demand. In fact, for the second year in a row, combined global consumption of corn, wheat and soybeans is outpacing production. As a result, inventories are being drawn down to make up the differ-ence. Decreasing supply in the face of rising demand eventually, we believe, will lead to higher grain prices.

Historically weather has been a primary catalyst for price spikes in agricultural commodities. For example, in 2019 unfavorably wet spring weather lead to plant-ing delays across the farm belt. Market participants feared that the delays would lead to a smaller than expected harvest. Consequently, spot corn prices rallied more than 38%.

We expect that weather may once again be a catalyst for higher prices in the not so distant future. One simple reason is that it has been 7 years since the last ma-jor drought. Going back to the year 2000, a total of 4 growing seasons have been impacted by drought (roughly one every 4.25 years). Grain prices spiked each time. Some farmers and analysts we speak to believe that we are “due” for a drought, or at least a drier than normal growing season. Whatever the cause, market participants are likely to be highly sensitive to any potential supply dis-ruptions given increasing global grain demand. Unease creates fertile ground for price volatility.

The common observer may conclude that international trade policy has an outsized impact on grain prices. Turn on the news at any time over the last 24 months and you were likely to hear mention of the “trade war” with China and the havoc it is wreaking on the American Farmer.

Yes, trade deals (or lack thereof) can impact grain prices in the short term, but in the long run the impact is negligible. When China placed a 25% tariff on US soybeans, prices immediately reacted by moving lower. Prices have since stabilized and rallied from their lows however, and China has been purchasing US beans in-spite of the tariffs. Why?

Because demand is not dependent on policy. There are only three major soybean exporters in the world, namely the US, Brazil and Argentina. No one country’s exports can meet the entire Chinese demand on its own.

China, after purchasing Argentine and Brazilian soybeans, has been forced to buy US soybeans to make up the difference.

As China increases purchases from Brazil and Argentina, it squeezes out smaller existing customers who are thereby forced to source their soybeans elsewhere. Increasingly those countries are looking to the US. In spite of the ongoing trade war, the US has already exported more soybeans in the current crop year versus the prior crop year.

It is logical to assume that in a posttrade war environment unfettered Chinese purchases of US soybeans will resume, likely increasing US soybean export demand even further.

We expect commodity price volatility over the next decade as markets navigate the politics of nationalism, populism and resulting trade policies. It is worth repeating that agricultural demand is not dependent on policy. Long -term market fundamentals will be the primary driver of commodities.

In the early stages of a recession, however, commodities have outperformed equities posting a positive average return of 1.2% versus a negative average return of 18.5% for equities. Notably, agricultural commodities, specifically grains, have historically provided investors with some protection from stock market downdrafts. In fact, the S&P GSCI Grains Index has outperformed the S&P 500 in 11 of the last 12 stock market corrections of 10% or more.

Increasingly, we are speaking with advisors who are looking for ways to reduce risk without sacrificing upside return potential. Considering that agricultural commodities have very low correlations (see chart on next page) to equities and deliver the potential for meaningful price appreciation, we believe more and more investors will begin allocating to grains as part of a diversified portfolio.

“Increasingly we are speaking with advisors who are looking for ways to reduce risk without sacrificing upside return potential.”

Grains In Your Portfolio

The concept of allocating to commodi-ties as part of a diversified portfolio is still relatively new. As such, investors by and large have begun gaining expo-sure to the space through exchange traded products. Investors looking to incorporate commodities for the first time typically follow one of two paths. They will either choose to invest in individual commodity funds starting with the “headline commodities,” oil and gold, or they will allocate to a diversified commodities fund gaining access to the entire space.

Eight of the ten largest commodity ETFs track either gold, silver, oil or natural gas. The two remaining funds are diversified commodity ETFs which are overweight energies and precious metals.

Over the next decade however, we foresee investors becoming more comfortable with commodities. As such they may begin to appreciate the importance of segmenting their exposure within the asset class like they do with equities and fixed in-come. For example, a 50% allocation to stocks is further segmented between large cap value, small cap growth, international developed, emerging markets, etc. Fixed income exposure can be segmented into treasuries, corporates, high yield, floating rate etc. Commodities can be segmented into energies, precious metals, agriculture etc.

By segmenting their commodity expo-sure to include grains, investors may be able to further reduce risk and cre-ate a more resilient portfolio. We be-lieve that over the next decade, as investors look to commodities, they will increasingly become aware of the potential benefits of allocating to grains.

Teucrium is an ETF provider focused solely on U.S. Agri-culture. Our mission is to empower investors with the knowledge and tools neces-sary to intelligently design well diversified portfolios. Teucrium’s suite of Exchange Traded Products has revolu-tionized the way commodity ETFs are structured; our products are widely available to investors and advisors in traditional brokerage accounts.