ValueWalk
Home Travel World map: The most common Surnames in every country (and their origins) 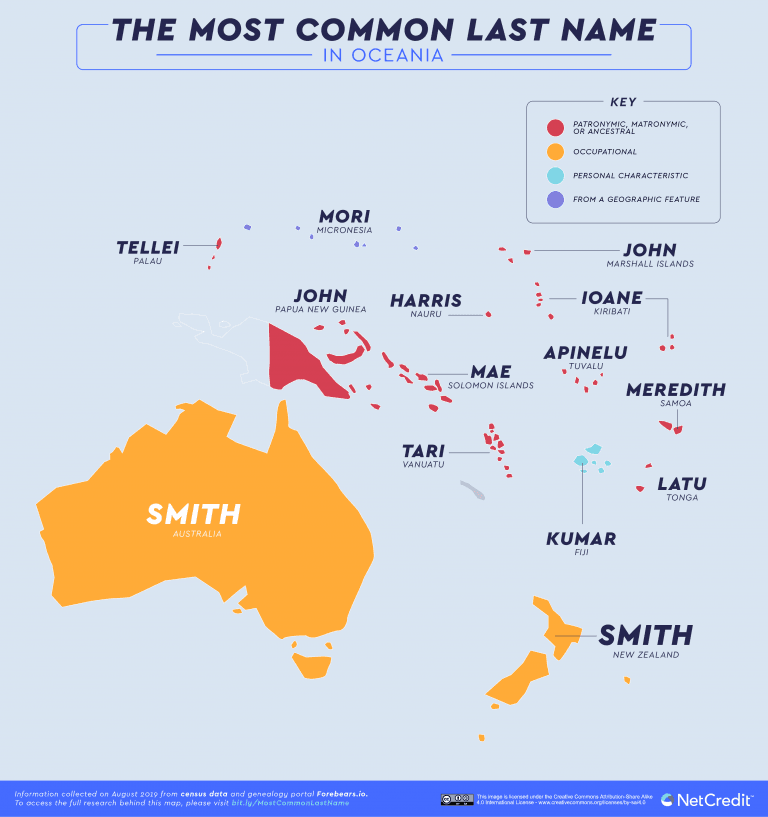 How’s your onomastics? Don’t know what the word means? It’ all about the study of common surnames. Studying the meaning and origin of names is a great way to find out more about where we came from through time. And studying names collectively can reveal lots about the place we’re from, too.

Surnames in particular make it easier to explore our shared and individual histories. The Chinese were the first to use surnames back in 2852 BC, but the use of surnames didn’t become a common convention in western Europe until the population rose in the Middle Ages and it got harder to distinguish between folk.

Surnames usually refer to one of five things: the person’s job, something personal about them, the place they’re from, the name of their father, or the name of a patron.

The people over at NetCredit decided to take a closer look at the patterns of surnames around the world. They looked at surname data from Forebears.io, and national censuses to see what the most common surname is in each country. They used the Oxford Dictionary of American Family Names and the Oxford Dictionary of Family Names in Britain and Ireland, among other sources, to discover the meanings of the names – and put their findings into a new series of maps. Here’s a closer look at the culture of surnames in each continent of the world.

Most cmomon surname by continent

Different regions distribute surnames for different reasons. African surnames are usually to do with the place, job, or family of each individual. But some Africans have a ‘praise-name,’ which may be mostly for ceremonial use. In Zulu culture, this is known as isibongo. In the Democratic Republic of the Congo, a common praise name is Ilunga: a Bantu word describing somebody who is tolerant without allowing themselves to be taken for a fool!

African names ometimes reflect the continent’s colonial past. For example, former Portuguese colonies such as Cape Verde are home to lots of people with Portuguese surnames, such as Fernandes. However, many Africans changed their colonial surnames after their countries won independence.

There is less variation among the surnames of people in Asia than elsewhere. For example, one in thirteen people in China are named Wang, while the most common name in the US – Smith – only belongs to one in every 121 people.

Why is this? That’s because the people of a region would take a name connected to the dynasty when a new one came to power. Tan and Chen are an example of names like this. They are derived from the state of Chen, which was an important region during the Zhou dynasty. This also means that Asian surnames can often be traced back to a particular era.

You can usually tell which area a European is from by looking at the end of their surname. “-ov,” “-sen,” “-son,” and “es” are all suffixes that appear after a parent’s name (i.e. Johnson, Jensen, or Jones). They are from, respectively, Bulgaria, Scandinavia, England, and Wales.

Europeans are often named after the kind of area they live. NetCredit’s research offers a peculiar example: “Bērziņš, the most common surname in Latvia, derives from the Latvian “bērzs,” meaning “birch,” and denotes someone who lives among birch trees,” writes Barbara Davidson.

In the United States, the top names are much the same as they are elsewhere in North America, representing the healthy migration between different areas of the continent (and a less healthy history of European colonization!) For example, Brown is the number one name in Jamaica and the number four name in the US.

A lot of these names come from America’s history of colonization. Former Spanish colonies boast lots of Hernandez-es. Haiti, a former French colony, has the most common surname ‘Jean’.

Peru is one of those rare places that has an indigenous name as its most common surname. Quispe, from the native “qhispi,” is an Aymaran name referring to precious stones.

Did you know that Guyana has a population that is two-fifths Indian? Immigrants and descendants of Indian settlers with the surname Persaud (from the Indian Prasad, meaning “grace” or “favor”) can claim the most common surname in the land.

South America, of course, has plenty of Spanish surnames. Gonzalez comes from the forename Gonzalo, meaning ‘battle’ in the original Germanic usage. Is the most common surname in Argentina, Chile, Paraguay, and Venezuela.

Australia and New Zealand have the well-known name ‘Smith’ as their most common surnames. Micronesia has a more surprising offering: Mori is the surname of 1 in every 38 of the population. It is actually of Japanese origin, meaning “forest.”

Fiji is another place with an Indian surname at number one. Like Guyana, around two-fifths of the population have Indian heritage. Kumar is the most common name here (as well as in northern India), and the 11th most common in the world. It comes from India’s Hindu heritage, and the Sanskrit word “kumāra” – meaning child or prince. 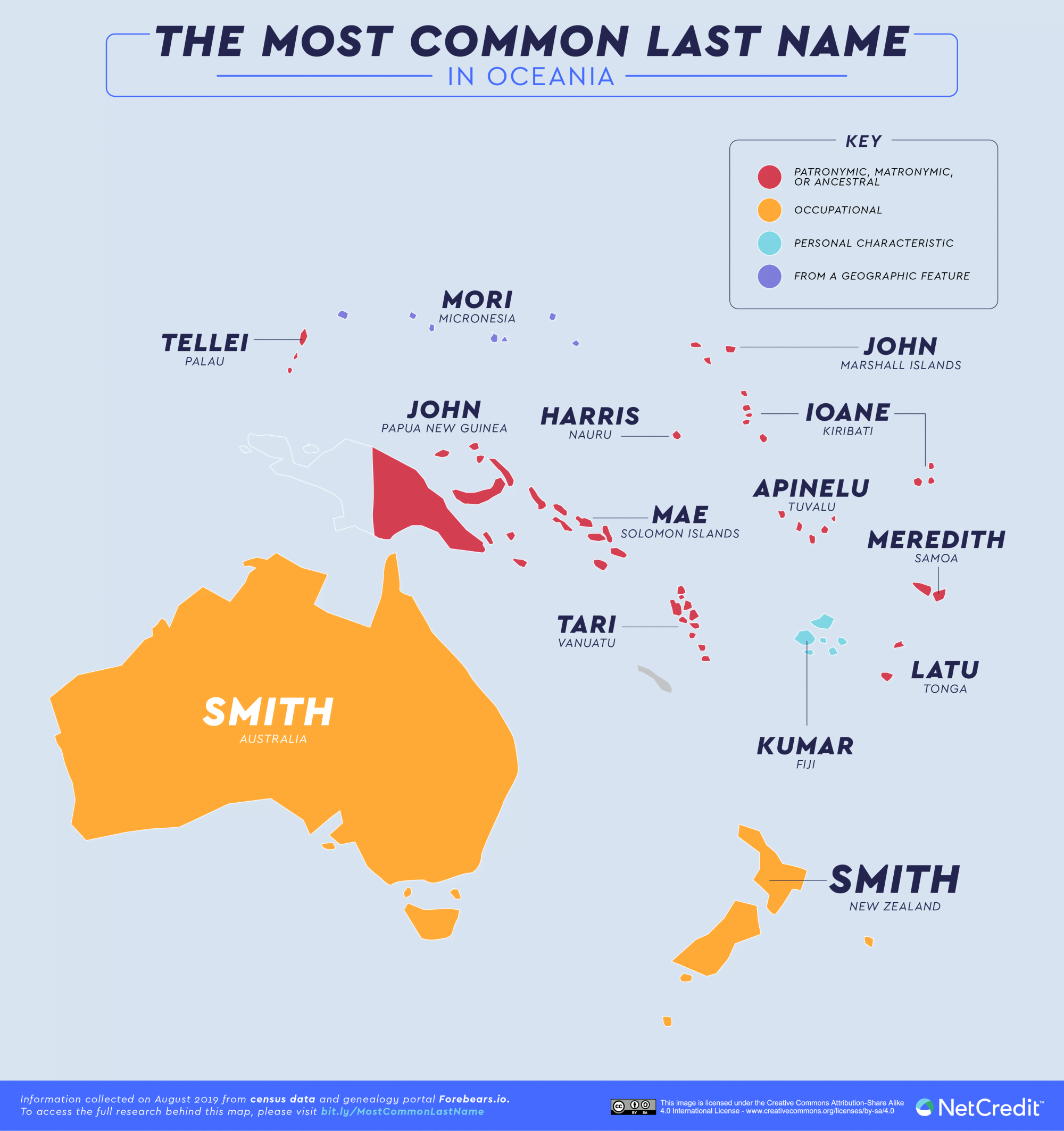 Can you find your homeland’s most common surname on the maps? Take a look and have a think about where it comes from and what it says about the world around you. 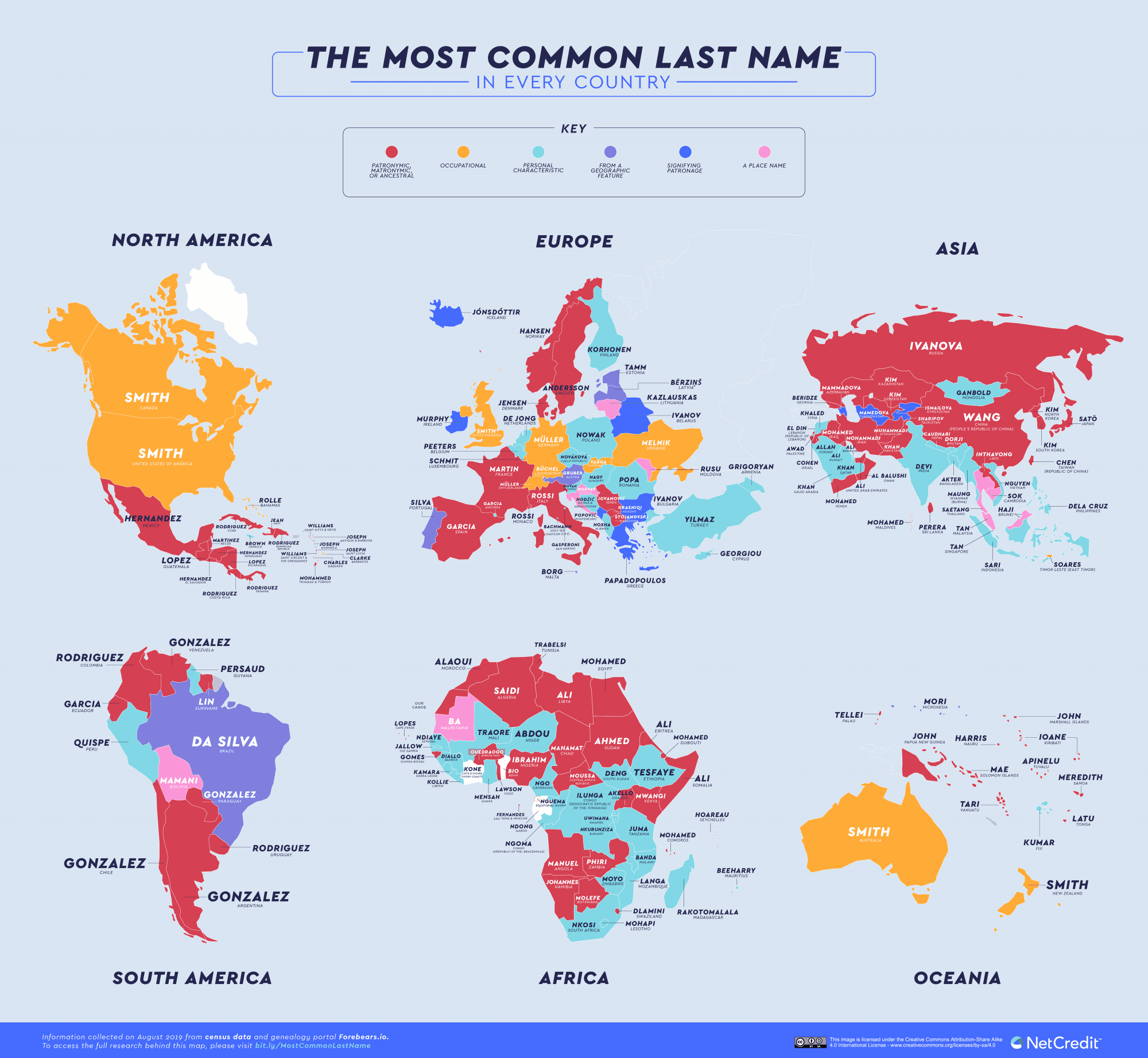