ValueWalk
Home Economics Tesla reports a positive net income: Is it over for shorts? 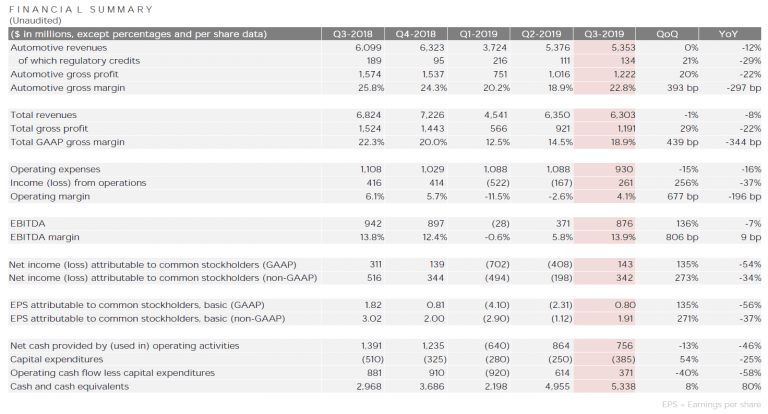 1) I’m still analyzing Tesla’s (TSLA) earnings report – and awaiting the 10Q – but there’s no question that reporting a positive net income, operating cash flow, and free cash flow quarter is impressive – and the stock is responding accordingly (also no doubt thanks in part to the mother of all short squeezes). The stock has now almost exactly round-tripped since I warned investors to avoid it on March 21.

Second, many of the numbers Tesla reported don’t make sense. Sales exceeded production, but inventory went up by $200 million? Sequential revenue was down, but pre-tax profit rose by $546 million? There are some funny things going on here – and Tesla didn’t provide much in the way of explanation in its earnings “update” (a 28-page slide deck) and conference call.

To be clear, I don’t think there was outright fraud. Rather, I suspect the company did classic “kitchen sink” accounting in the first half of the year, whereby it took extra-big write-downs, and is now releasing the excess to make its third quarter numbers look better than they really were. (Believe it or not, done “correctly,” all of this is within the bounds of GAAP accounting – hence, it’s not technically fraud, though it’s certainly misleading.)

The profit and free cash flow figures also require scrutiny. Despite a slight drop in revenue, Tesla’s pre-tax profit swung up by almost $550 million from the second quarter. Of that, $126 million, or almost a quarter, was due to a positive swing in “other income,” including foreign-exchange gains.

Finally, I want to repeat some things I’ve said many times before…

Today, I am neutral on the stock. I think it is a terrible long, but probably also not a good short right now. Over the next few months, the company will likely report positive developments regarding the launches of the Shanghai Gigafactory and Model Y. In addition, I suspect it has more “kitchen sink” benefits it can use to spruce up fourth quarter earnings. So for now, I think the wisest course of action is to sit on the sidelines and perhaps look for an opportunity to short the stock early next year…

2) I lost my charity bet with Andrew Left and a dozen other folks that Tesla wouldn’t report a positive net income quarter this year, so I’ll be donating $15,000 to various charities of their choice. I tip my hat to them…

3) Speaking of the type of questions/insights/analyses that are useful, here’s what a friend emailed me earlier today: