We stated that we could look for ‘something other than the text password’ in the domain of ‘Secret Credentials’ and referred to the proposition of Expanded Password System in the earlier article “ Digital Identity – Preventing Cyber Threats Coming From Within”. We would like to talk more about what Expanded Password System specifically offers in this article.

What our Episodic Memory Brings for Identity Assurance

In the matrix below, there are several known images. We can easily find all of them right away. Or, rather, these known images jump into our eye.  And, only we are able to select all of them correctly. This is Expanded Password System. 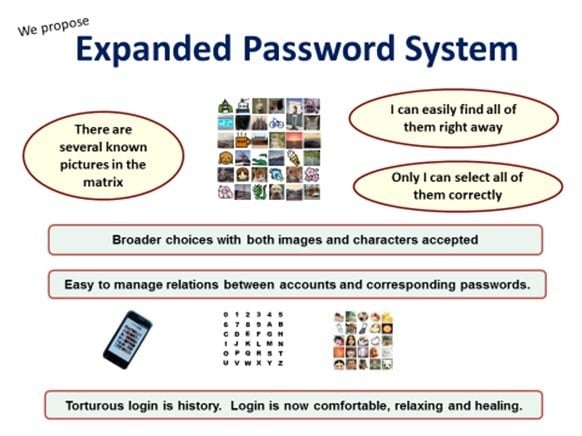 We can use both images and characters. It’s easy to manage the relation between accounts and the corresponding passwords - Comfortable and even fun!

The idea of using pictures for passwords is not new. It’s been around for more than two decades but the simple forms of pictorial passwords were not as useful as had been expected. Unknown pictures we manage to remember afresh are still easy to forget or get confused, if not as badly as random alphanumeric characters.

Expanded Password System is new in that it offers a choice to make use of known images that are associated with our autobiographic/episodic memories.

Since these images are the least subject to the memory interference, it enables us to manage dozens of unique strong passwords without reusing the same password across many accounts or carrying around a memo with passwords on it. And, handling memorable images makes us feel comfortable, relaxed and even healed. Torturous login is history.

Well, let’s talk about some major problems that use of our own episodic memory enables us to solve.

So far, only texts have been accepted. It was, as it were, we have no choice but to walk up a long steep staircase. With Expanded Password System, we could imagine a situation that escalators and elevators are provided along with the staircase. Or, some of us could think of all those ladders we have for climbing in Donkey Kong. 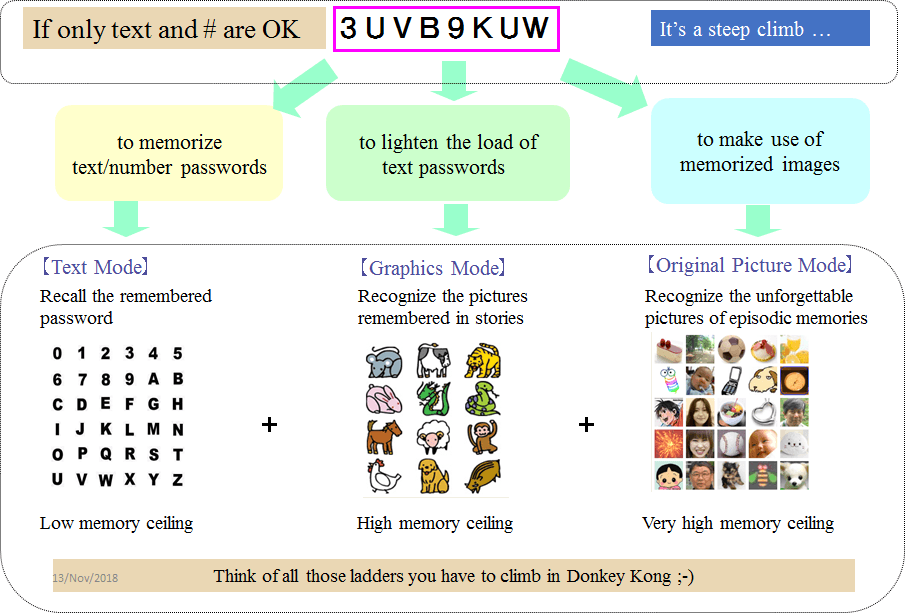 Where we want to continue to use text passwords, we could opt to recall the remembered passwords, although the memory ceiling is very low, Most of us can manage only up to several of them.

We could opt to recognize the pictures remembered in stories where we want to reduce a burden of textual passwords. The memory ceiling is high, that is, we would be able to manage more and more of them.

Where we choose to make use of episodic image memory, we would only need to recognize the unforgettable images, say, known images. There is virtually no memory ceiling, that is, we would be able to manage as many passwords as we like, without any extra efforts.

When unique matrices of images are allocated to different accounts, those unique image matrices will be telling you what images you should pick up as your password for this or that account.

When using images of our episodic memories, Expanded Password System will thus free us from the burden of managing the relation between accounts and the corresponding passwords. 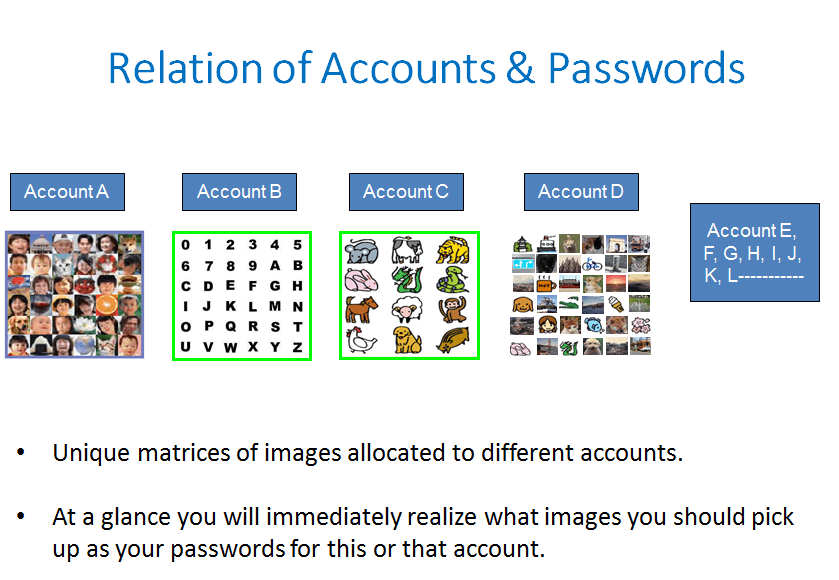 Hard-to-break text passwords are hard-to-remember. But it’s not the fate of all the secret credential. It would be easily possible to safely manage many of high-entropy passwords with Expanded Password System that handles characters as images.

Each image or character is presented by the image identifier data which can be of any length. Assume that your password is “CBA123” and that the image ‘C’ is identified as X4s& eI0w, and so on.

When you input CBA123, the authentication data that the server receives is not the easy-to-break“CBA123”, but something like “X4s&eI0wdoex7RVb%9Ub3mJvk”,  which could be automatically altered periodically or at each access where desired

A very strong password supposed to not be remembered and written down on a memo should be viewed as 'what we have', definitely not 'what we remember', so it could be used as one of the two factors along with a remembered password.

We could then turn a boring legacy password system into a two factor authentication system at no cost, just by verifying two passwords at a time, one volitionally recalled and the other one physically possessed.

This configuration could be viewed just as a thought experiment or could actually be considered for practical application in between a single factor authentication and a costly heavily-armored 2-factor scheme, or, as a transition from the former to the latter.

It goes without saying that Expanded Password System could be brought in for generating a remembered high-entropy password.

A simple brain-monitoring has a problem in security. The authentication data, if wiretapped by criminals, can be replayed for impersonation straight away. Therefore the data should desirably be randomized as the onetime disposable ones.

The monitoring system will collect the brain-generated onetime signals  corresponding to the registered images.  Incidentally, the channel for showing the pictures is supposed to be separate from the channel for brain-monitoring.

If intercepting successfully, criminals would be unable to impersonate the users because the intercepted data has been disposed of.

Advocate of ‘Identity Assurance by Our Own Volition and Memory’, Hitoshi Kokumai is the inventor of Expanded Password System that enables people to make use of episodic image memories for intuitive and secure identity authentication.  He has kept raising the issue of wrong usage of biometrics and the false sense of security it brings for 17 years. Mnemonic Security Inc. was founded in 2001 by Hitoshi Kokumai for promoting Expanded Password System. Following the pilotscale operations in Japan, it is seeking to set up the global headquarters.