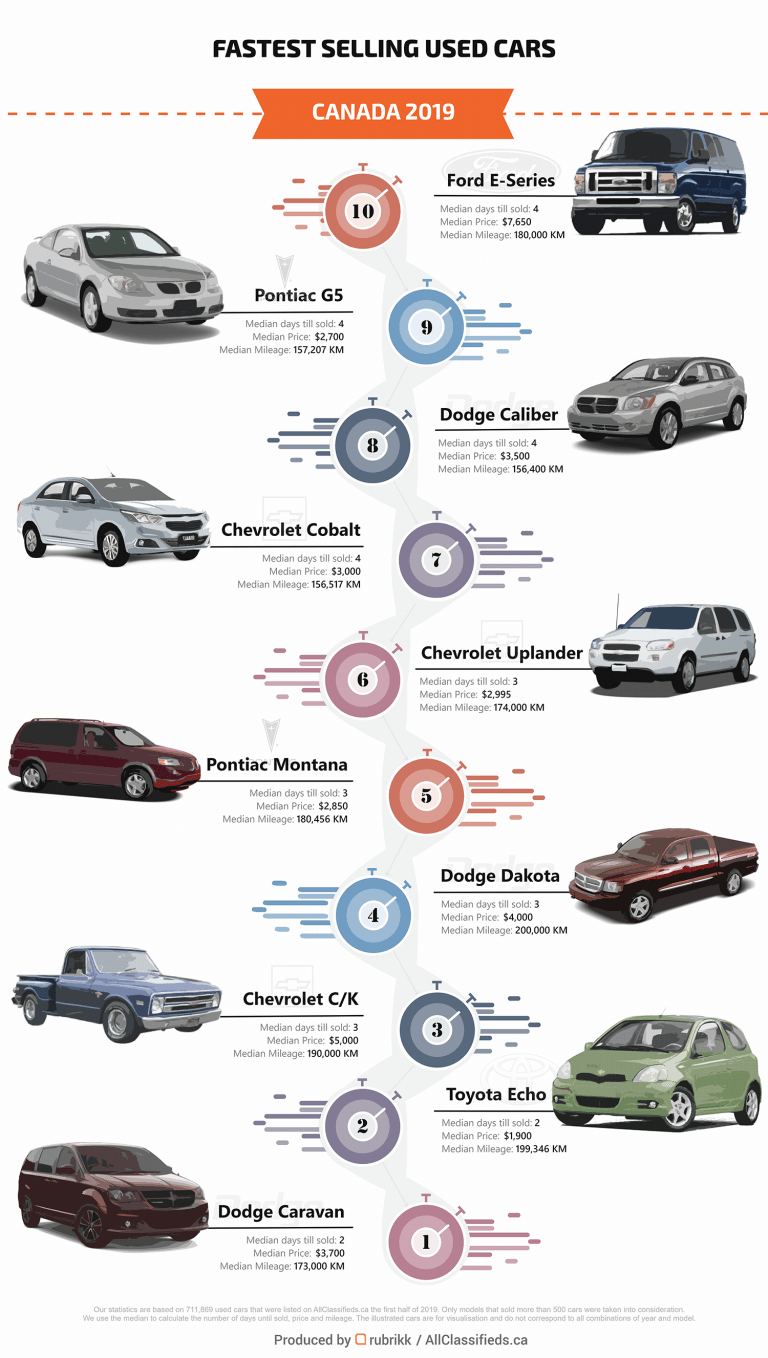 Do you want to sell your Dodge Caravan? They will tear the car out of your hands. On an Audi Q7 or Chevrolet Sonic, you need a lot of patience. Allclassifieds.ca has determined from thousands of car sales the “bestsellers” and the “storekeepers”.

Which used cars are sold the most? Which ones change owner the fastest? And with which, as a seller, do you really have to beg for someone to finally buy your vehicle? This is shown by the current data of the Rubrikk Group, running allclassifieds.ca in Canada. Originally from Norway and now active in many countries, the service provider analyzes advertisements for various car, job, and real estate portals. In the car sector, they analyzed the most sold second-hand cars, the fastest and the slowest-selling used cars.

With almost 21,000 used cars sold the Ford F-series followed in second place. They changed their owners on average at a mileage of 114,000 KM and for a retail price of 22,500 Dollars.

On places four to six were the Hyundai Elantra, the Toyota Corolla and the Mazda 3 respectively.

Places seven and eight were occupied by the Dodge Grand Caravan and the VW Jetta, averaging in price at 16,500 and 11,000 Dollars. 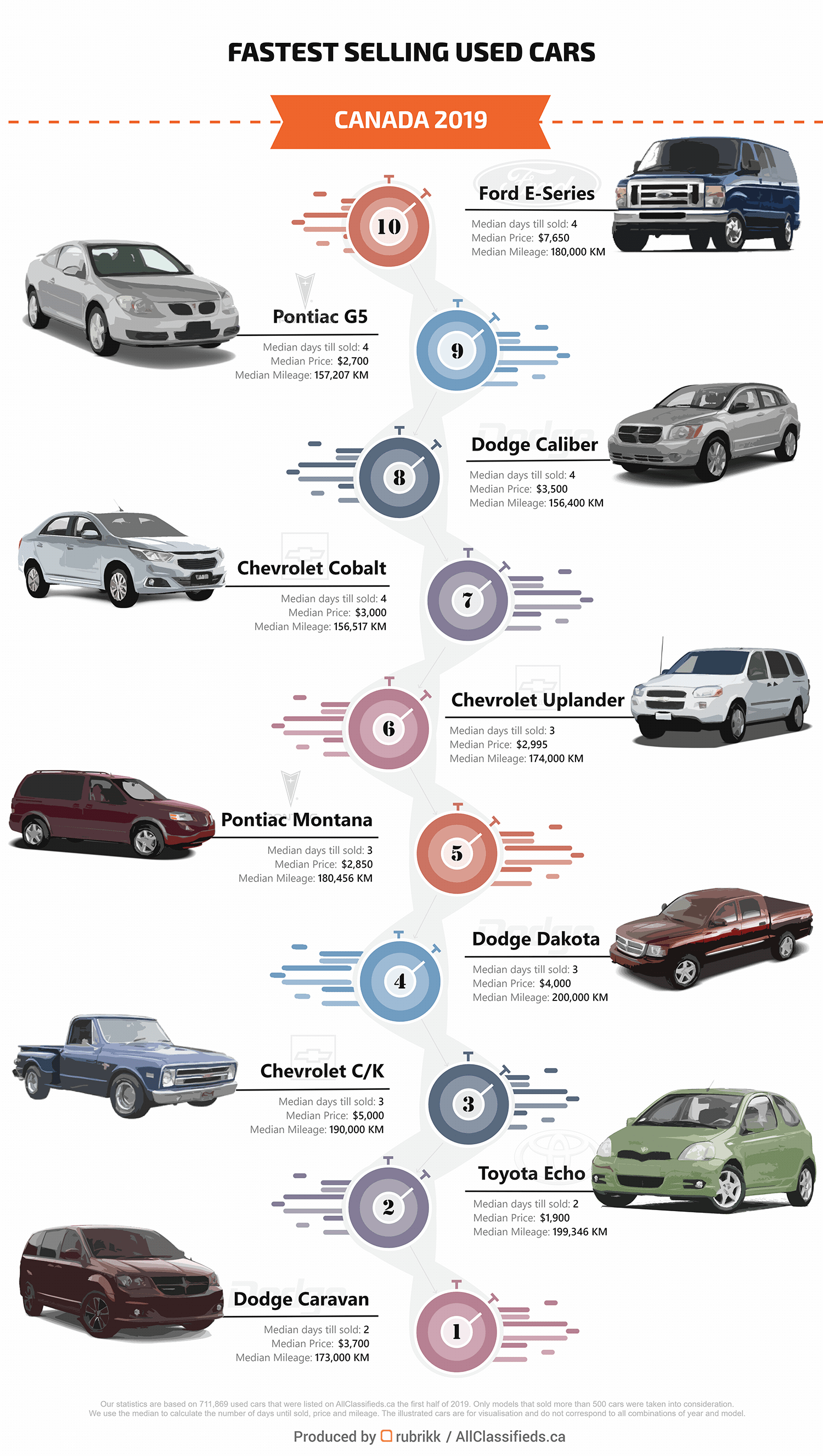 The Dodge Caravan was sold the fastest. On average it was already sold after two days.

In place two was the Toyota Echo, a real bargain at 1,900 Dollars on average.

Place three went to the Chevrolet C/K, usually not taking more than three days to be sold at an average of 5,000 Dollars.

Taking only three days to be sold were the Dodge Dakota, the Pontiac Montana and the Chevrolet Uplander, which respectively obtained the places from four to six.

On the places seven to ten were the Chevrolet Cobalt, the Dodge Caliber, the Pontiac G5, and the Ford E-Series which on average took about four days to be sold. 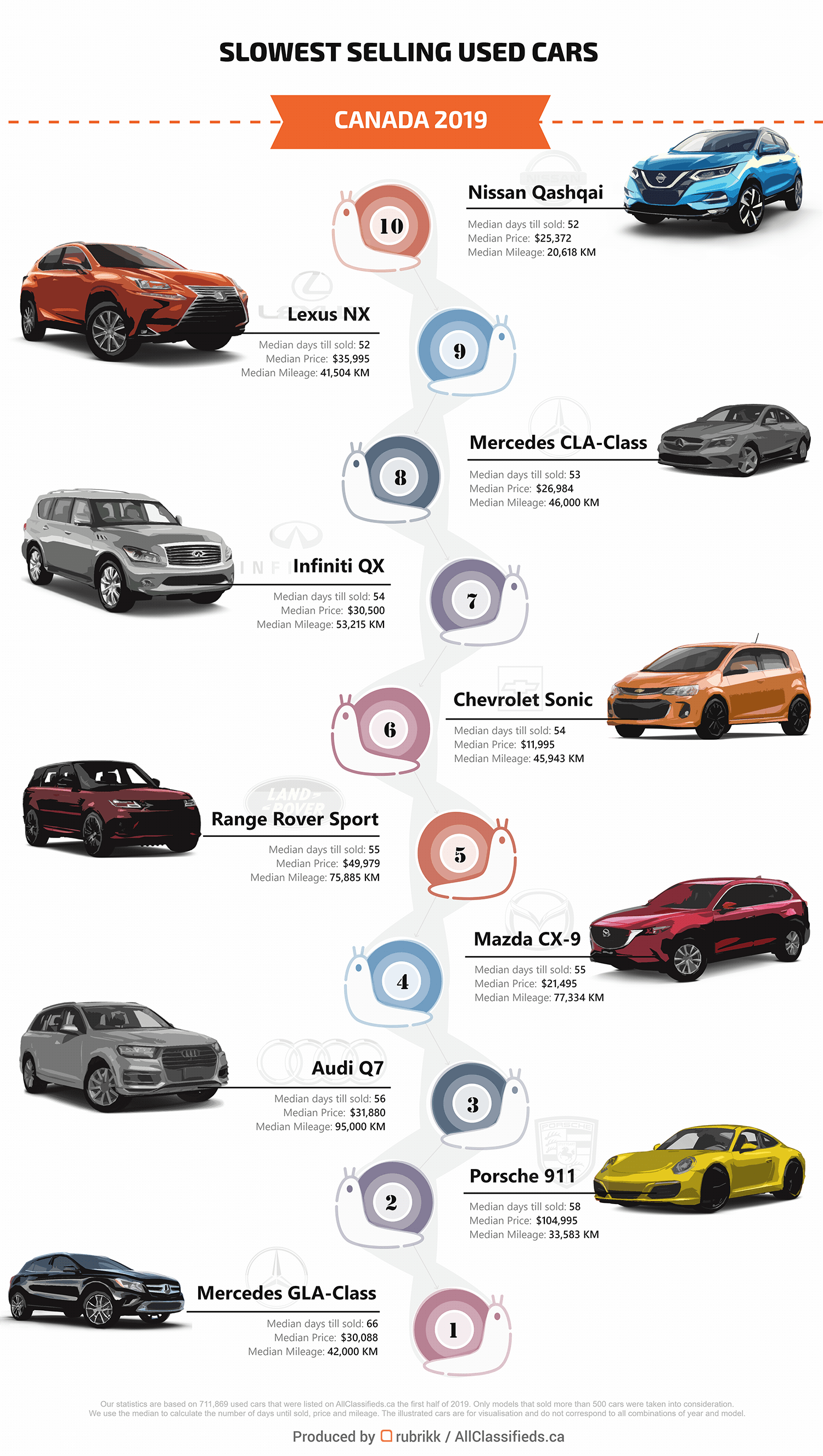 In contrast to the fast-selling used vehicles such as the Dodge Caravan, there were also some models that the used car buyers did not run after.

At the top of the snail race was the Mercedes GLA Class, where resale took an average of 66 days.

Tailing those were the Chevrolet Sonic and the Infinity QX which had to wait an average of 54 days to get a new owner.

Next in line was the Mercedes CLA-Class with 53 days, the Lexus NX (52 days), and finally, the Nissan Qashqai also taking 52 days to sell.

Our statistics are based on 711,869 cars that were listed on allclassifieds.ca in the first half of the year 2019. Only models that sold more than 500 times were taken into consideration. We use the median to calculate the number of days until sold, price and mileage.