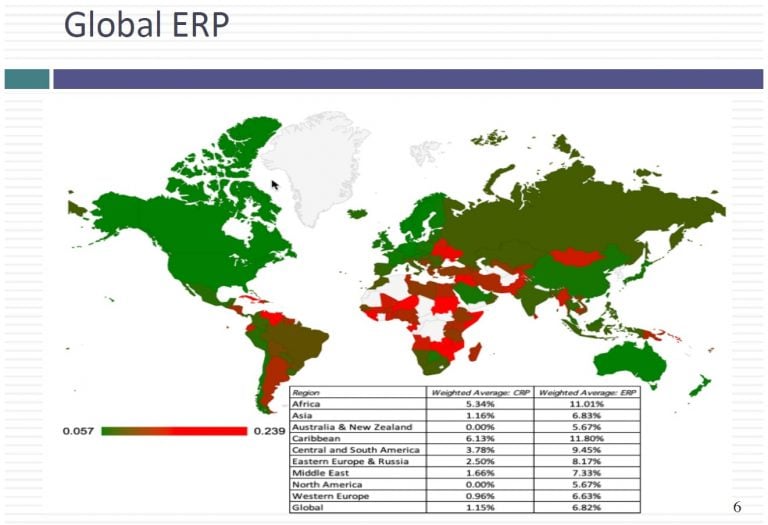 As investors and companies globalize, understanding why risk varies across countries and how to incorporate that risk into decision making has becoming key. In this session, I first look at fundamentals from corruption to violence to legal protections that cause risk to vary across countries. I then look at measures of country risk, both composite and market-based, and complete the session by converting them into equity risk premiums by country.

Hi, welcome back. If you're in any part of finance, whether it's valuation, corporate finance portfolio management, the reality is country risk is something you have to get comfortable with. There was a point in time not that long ago, when you could live in your domestic market and not care about the rest of the world, especially if you're a US analysts investor or corporation. Those days are behind us. And here's why. every investor, every company, every portfolio manager has been told that the way to diversify is to go global. And in a sense, we've taken up that advice, right. And as we go global, the reality is, it's very difficult to find companies that are exposed only to domestic risk, not impossible, very difficult. So when you look at a Coca Cola, or you look at Microsoft, you might think of adding US companies, but the reality is, these are global companies that have been through the accident of history to be us Incorporated. The same way in If you value in Infosys, an Indian company of Bali, a Brazilian company, let's face these are Indian resilient companies only name the reality is they too are multinationals that get their revenues from much the world. The bottom line is that as an investor and as a company, you have to start to be able to understand the trade off from from looking outside the market. What's the trade off, especially in developed markets for long term investors gave credit to companies that went into emerging markets, why There's more growth there. That's true. But with that growth, growth comes risk. And if you're unwilling to assess the risk that is created from these decisions, you're going to over expand. So this session, I'd like to talk about country risk. Before I do that, though, let me talk about why until about 30 years ago, country risk didn't even make it into textbooks or into valuation.

For a long time, the advice was, if you ignore it will go away. Sounds like strange advice, right? But it's an extension of the diversification argument and your Southwest. If you're a company invested in 60, or 65 different countries, the argument was that country risk is diversify, but then what happens in one country would be offset by another. And you know what, in the 1980s, that was probably pretty good advice. A Coca Cola in the mid 80s, could use a 12% dollar cost of capital around the world and ignore the fact that some of its business might be in Russia. Some of it might be in Brazil, some of it in India, and hope that everything averaged out. That argument, though, rests on the premise that risk in countries is idiosyncratic that there's very little correlation across countries, again, in the mid 1980s. That was generally true. What happened in Sao Paulo did not really affect what happened in Mumbai, what happened in Mumbai, had no effect of what happened in Moscow. That, again, is history today is Sao Paulo as a bad day, Mumbai feels the pain, we're all connected at the head. And that effectively means that even if you're in multiple countries, 60 6570, you're not going to be able to diversify away country risk. The way this is going to show it is when you have a global shock and not no matter what market, you're going to see it percolate all the way through the world and emerging markets are going to see and feel the pain a lot more than developed markets, even if the crisis started in a developed market.

So let's start talking about country risk. If you think about countries, the most obvious countries that comes to mind most most people when they think about it, is exchange rate risk. When a company or an investor invest outside its domestic market. The reality is you're exposed exchange rate risk, it is going to affect your revenues and your earnings, new cash flows if you're a company and your returns appeared investment, but that is really not the key risk if you ask me because exchange rate risk is a manifestation, the manifestation of much more real fundamental risk, the risk you worry about a political and economic risks and Chris might manifest themselves in exchange rates, but then my therefore deeper. So the question then is, what are these sorts of countries? How do we bring them into the decision process and deal with that, I'm going to start at the source. Let's think about the reasons why some countries are riskier than others. The first is the life cycle argument. I've used the argument of life cycle to explain why companies in different stages in the life cycle have both different growth potentials and different risk. young companies have all of the value come from the future. And not surprisingly, they also have a lot more risk. Mature companies have a lot less growth potential, but they have less risk. I am going to extend that argument of a life cycle in two countries. countries that are early in the life cycle. Young growth economies have a lot of potential but they also have a lot of risk. As countries mature, you should see the both the growth and the risk of cloud. So as you look across the world and you put countries in different stages in the life cycle, you should expect to see a correlation with countries.