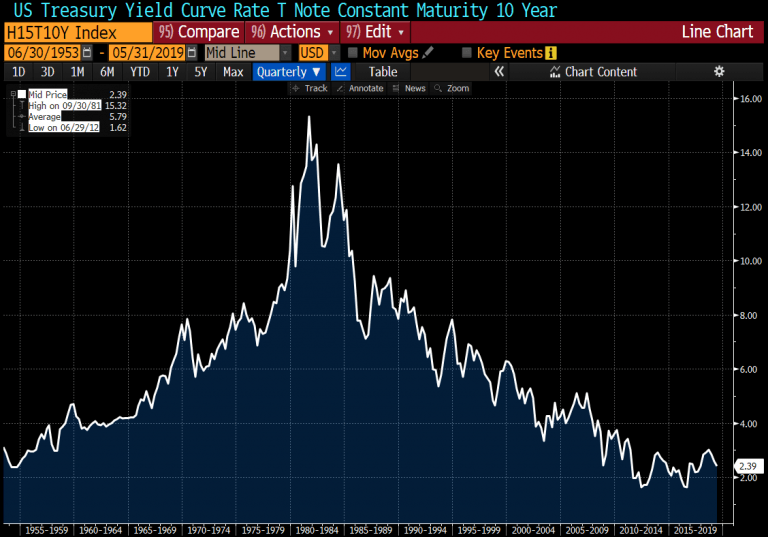 A series of important factors in the U.S. stock market are in play which beg the question, “Are we at the beginning of a risk cycle or at an ending?” The answers will have a bearing on what to own and where to be positioned going forward. These thoughts won’t be exhaustive, but we hope to get you thinking on a few important subjects.

There are several signs that the stock and bond market have an amazing comfort with risk. First, a fintech company has recently tied its checking accounts to an ETF owning the S&P 500 Index. Rather than earning interest, your balance would fluctuate based on what the stock market does. Wait until one of these businesses run into a full-blown bear market that takes years to repair. The politicians will have a hay day in the aftermath running around and closing that barn door.

Past performance is no guarantee of future results. Source: JPMorgan, The Value Conundrum, 06 June 2019.

This is the most popular that low volatility stocks have been in relation to value-oriented shares in my 39 years in the investment business. This means that the price-to-earnings ratio (P/E) of companies, in favor by being considered “safe,” are much higher than in past eras. Poster children for this chart are stocks like Costco, Proctor & Gamble, Coke, Visa, Mastercard, Brown Forman, Starbucks, Fair Isaac and others. As we write this, it is not unusual for these stocks to trade at 30-times earnings, while the 200 cheapest stocks in the S&P 500 trade at around 12-13-times earnings, many below 10 P/E.

James Grant has been writing for major business publications for decades. In his latest piece called, “Low rates forever-Don’t Count On it,” Grant hit the nail on the head:

Humans eat, sleep, and extrapolate. What we think we can foresee is often nothing more than what we have recently seen. “More of the same” is the sensible default prediction in politics, baseball, and interest rates alike. In rates, it actually tends to work.1

If Grant is correct, and we think he is, we are bottoming interest rates that are preparing to rise for 35 years. Notice what rates on the 10-year Treasury bond have been since 1953: 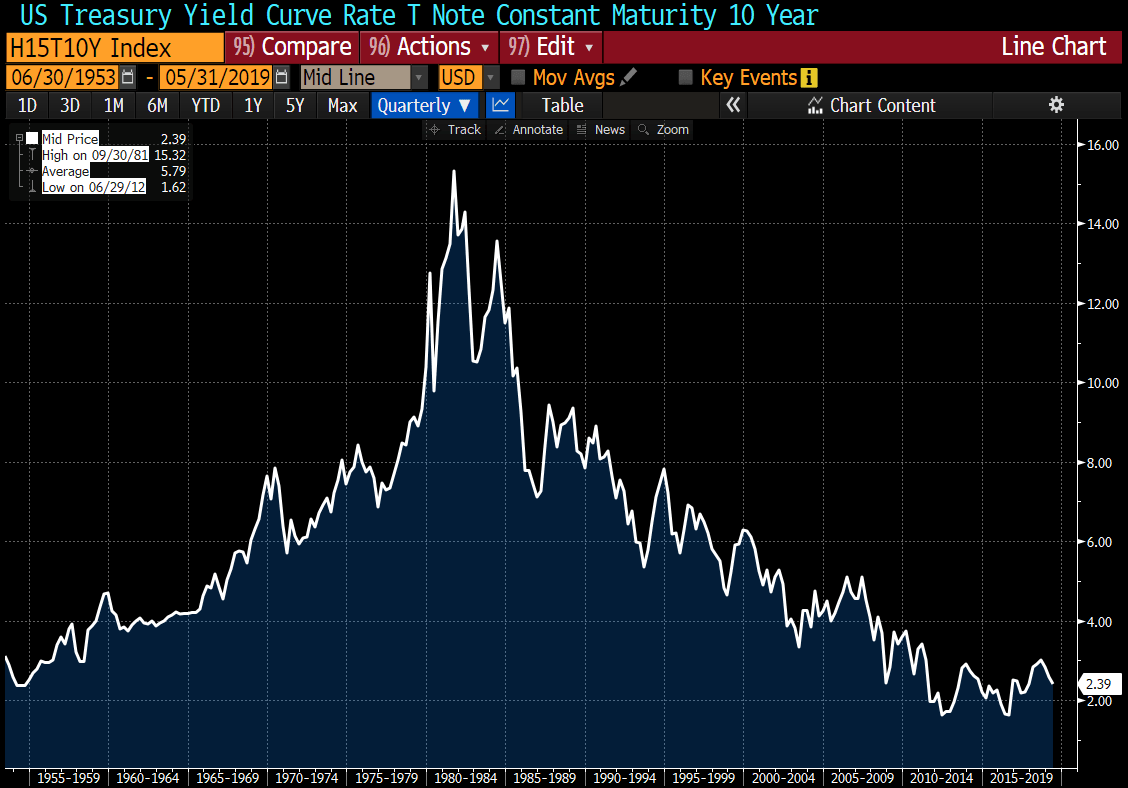 The comfort with low volatility stocks and the aversion to value stocks is closely tied to the low level of interest rates. If investors are trapped into owning common stocks due to an unmeaningful level of riskless interest, then a steady stream of money will be invested into the already most popular securities. Why wouldn’t somebody want their checking account tied to a set of securities which only seem to go up?

Our regular readers will know why we believe that James Grant is correct and that we are at a major inflection point in interest rates.  In 1981, the average baby boomer was around 25 years old and the oldest boomers were 35 years old. They were about to aggregate the focus of their life on work, family and household formation. They were going to be 79 million strong by 1999 and were going to be 75% more people than the 44 million silent generation group which preceded them. When 79 million people want to borrow money from 44 million in the prime savings age of 45-60, the price of money goes up (Grant would say for 35 years).

Where are we now? There were 89 million people in the millennial age group in 2017. That age group should peak at around 95 million. They are replacing 65.8 million Generation X folks in the 30-45 age bracket, which historically drives necessity spending in the U.S. The Gen-Xers are taking the boomers place in the 45-60 age bracket. We should see at least a 15% reduction in savings by sheer demographics.

Currently, millennials are 34% more people and should top out at around 44% more household formations when it is all said and done. Therefore, Grant is correct in assuming that a large increase in the borrowing age group and a reduction in the savings age group could cause a prolonged increase in the price of money.

Adjusted for population, today’s single-family residence building is bumping along historic lows and would have been considered a big slowdown in the 1960s, 1970s and 1980s. 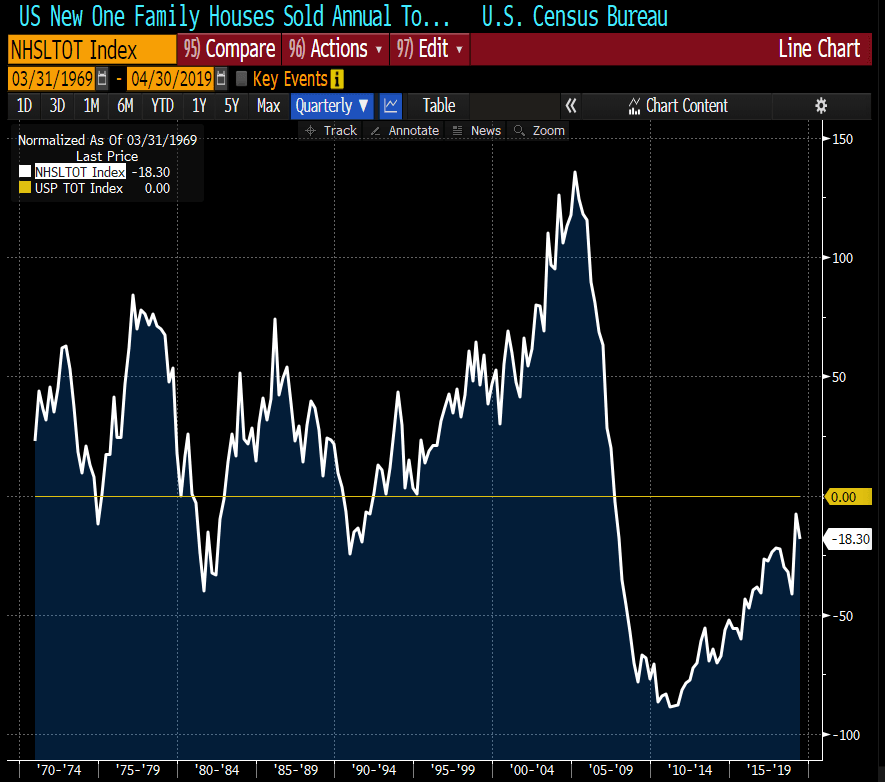 The obstacles to a big increase in homebuilding are solvable. Married adults with kids will go where their money gets treated the best. This means moving away from expensive coastal cities to either their suburbs or to the other 85% of the country where houses can be built much more affordably.

Homes get built when existing homes are unaffordable to buyers. Publicly-traded home builders have the largest share of the market they’ve ever had, and the access they have to capital and labor compared to mom-and-pop builders gives a moat as good as we’ve ever seen.

Few industry groups perform well in a strong economy with rising interest rates, but the major banks are one. We like the leverage that Bank of America (BAC), JPMorgan (JPM) and Wells Fargo (WFC) have on greater economic activity driven by demographics and household formation. Few investors want to take the risk associated with betting that the economy will be stronger than expected.

James Grant says the wise man would be expecting higher interest rates and a rearrangement of the willingness to take risk. We like the position of avoiding areas where the most courage is being placed and emphasizing value when it is the cheapest relative to low volatility trades.