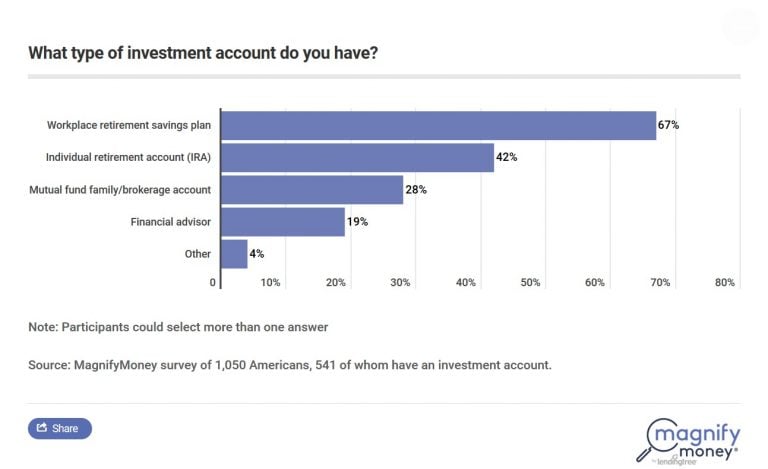 The biggest reason Americans don’t like the stock market is because they are afraid they’ll lose their money in a market downturn or a crash. Our survey found that almost 61% of Americans hesitate to invest in the stock market because of a potential crash. Not every demographic feels that anxiety equally: Almost 72% of millennials worry about a crash, compared with only 56% of Gen Xers and 55% of baby boomers, despite the fact that the younger millennials have more time to absorb and make up for losses in the market.

Beyond age, gender also plays a role in shaping a person’s investing strategies. Our survey found that 59% of men were willing to accept the risk of losing money in the market if it gave them the possibility of a big windfall, while 58% of women didn’t think the loss of any money was worth investing in the market. Women also worry more about making a mistake with their investment decisions — 63% of women versus 53% of men — and are less likely to have an investment account — 44% of women have accounts versus 60% of men.

According to our survey at MagnifyMoney, more than half of the respondents have an investment account, and most of them (67%) have one thanks to their employer.

Why you need to invest in the stock market

Movies such as The Wolf of Wall Street and The Big Short may give the impression that the stock market is the exclusive playground of the privileged looking to turn their millions into billions. But the modern retirement savings landscape — specifically the shift from companies offering pension plans with guaranteed lifelong income, to employer matches on private investment accounts — makes investing in the stock market a necessity for anyone hoping to retire one day.

“Unless you are a Kardashian or the founder of a tech startup, very few people will be able to save enough money to have a secure financial future without at least some exposure to investments,” said David Rae, a CFP based in Los Angeles.

It’s not a coincidence that Americans who don’t invest in the stock market also lag woefully behind on their retirement savings. Less than half of the country’s women have an investment account, and only 36% of them report feeling on-track with their retirement savings, according to a 2018 study by Prudential. And that sense of falling behind isn’t just a feeling — a separate survey from Student Loan Hero, which like MagnifyMoney, is also owned by LendingTree, found women have saved on average only half as much as men.

Millennials who shun the stock market risk seeing their retirement dreams slip away. A report from the nonprofit National Institute on Retirement Security found that millennials as a whole have “earned about 20% less in wages, are less likely to own a home, and have accumulated about half of the wealth of their parents at the same stage in their lives.” A separate study from MagnifyMoney shows just how far this generation has to go, reporting a median savings of $23,000, instead of the $112,000 many financial experts would recommend.

In short, unless you have a trust fund or a billion-dollar idea, you can’t really afford to ignore the benefits of compound interest granted by investing and just store all of their money away in a deposit account, where inflation will almost certainly eat away most of its purchasing power over time.

How to get over the fear of investing

The thought of investing may cause a sinking feeling in most people’s stomachs, but the following advice should calm your nerves when it comes to putting money to work in the stock market.

Don’t panic when the market does

If your worst fears about the stock market are realized in the form of a recession or crash, one surefire way to make things worse is to dump all your stocks and leave the market. “Sticking to your portfolio, whether times are good or bad, is usually the right choice,” said Rae. “Buying and selling without a plan is a recipe for crappy investment returns.” Fortunately, the MagnifyMoney survey found that almost half (49%) of respondents plan to do nothing if a recession hits.

If a recession hits, what would you do?

While it’s good so many people aren’t planning to ghost during a bear market, you could also start thinking of a recession as a chance to snag stocks on the cheap. “A recession is like a big sale on stocks that only comes along every few years,” said Rae. “Look to increase your contributions to your investment accounts, if you can.”

Act your age with your investments

Not only are the young blessed with wrinkle-free skin and all of their hair, but they also have the ability to maximize the return on their investments thanks to the magic of compound interest. Because time is on their side, they can afford to allocate more of their savings in stocks — where risks and rewards are both greater — than in lower-risk, lower-return bond markets, money market accounts, savings accounts or other deposit accounts.

As you get older and wiser, and closer to the big retirement date, you should rethink the makeup of your portfolio, shifting more investments to safer asset classes and away from riskier stocks. This way if the market suffers a downturn, you’re be less exposed to the damage and better able to weather the storm until good times are here again.

Don’t be afraid to ask for help

You may think you need to be rich before you need to hire a financial advisor, but there’s nothing further from the truth. Advisors aren’t free, and even the low-fee ones will charge a commission that ultimately comes from your savings, but the peace of mind and clarity you gain about your investments can be worth the money. One rule of thumb you might consider is to use a robo-advisor if you have less than $100,000 in investable assets, and pony up for a real live human advisor once your investments break six figures.

The time to invest in the market is now

Most Americans don’t like the stock market, but investing is almost a requirement if you want to retire. Fortunately, investing doesn’t have to be so scary and by taking some time to learn the basics, you’ll be well on your way toward celebrating your golden years in financial security.

MagnifyMoney by LendingTree commissioned Qualtrics to conduct an online survey of 1,049 Americans, with the sample base proportioned to represent the general population. The survey was fielded May 13-15, 2019. Generations are defined as follows: