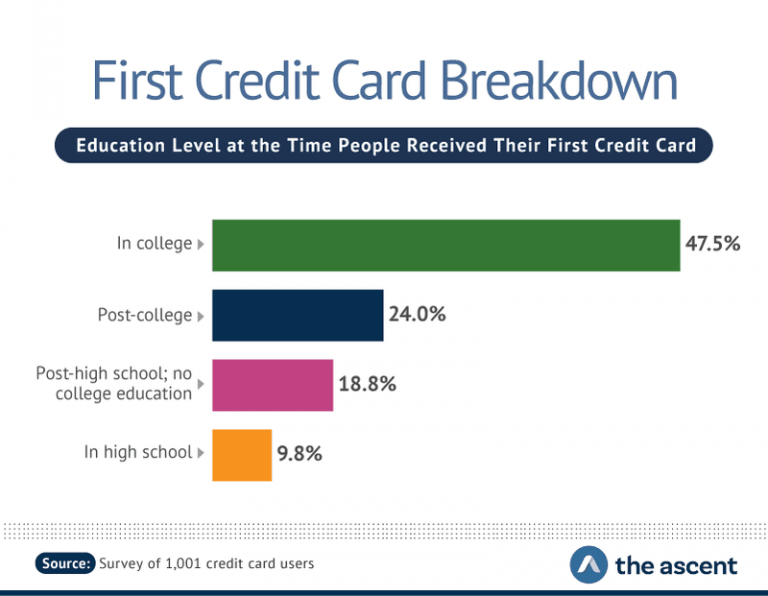 At a certain age, young adults become responsible for their own financial standing, including making the decision to open and maintain active credit profiles.

For many Americans, the reality of this first-hand financial education comes hand-in-hand with other major milestones in life: getting their first jobs, going to college, even moving out on their own.

For a more intimate look at how young people often approach their first experiences with credit cards, The Ascent by The Motley Fool commissioned a study of 1,001 credit card users to learn how often teens and students are venturing into the world of credit despite not always having the best financial health or understanding to back their decisions. As this study explores, this can result in young adults amassing thousands of dollars in debt as students or while they’re still unemployed. 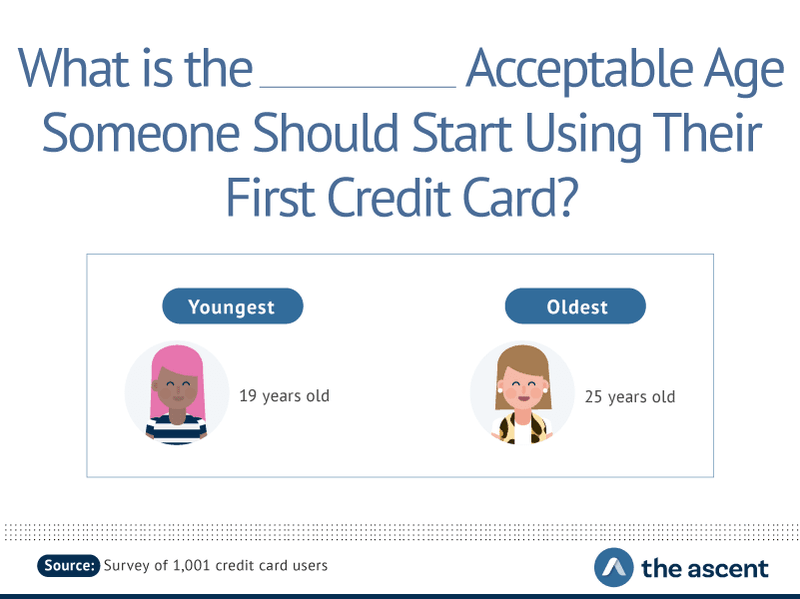 More than half (54.3 percent) of respondents received their first credit card between the ages of 18 and 20 years-old. While a small percentage of respondents (4.2 percent) became authorized users or account holders under the age of 18, they found another 29.8 percent were between the ages of 21 and 24 before opening accounts. More than 1 in 10 respondents (11.8 percent) were at or over the age of 25 before coming into possession of their first credit cards. 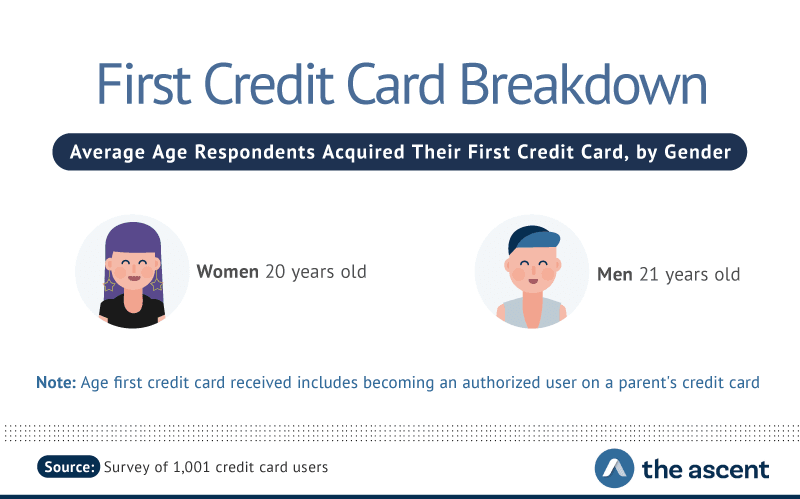 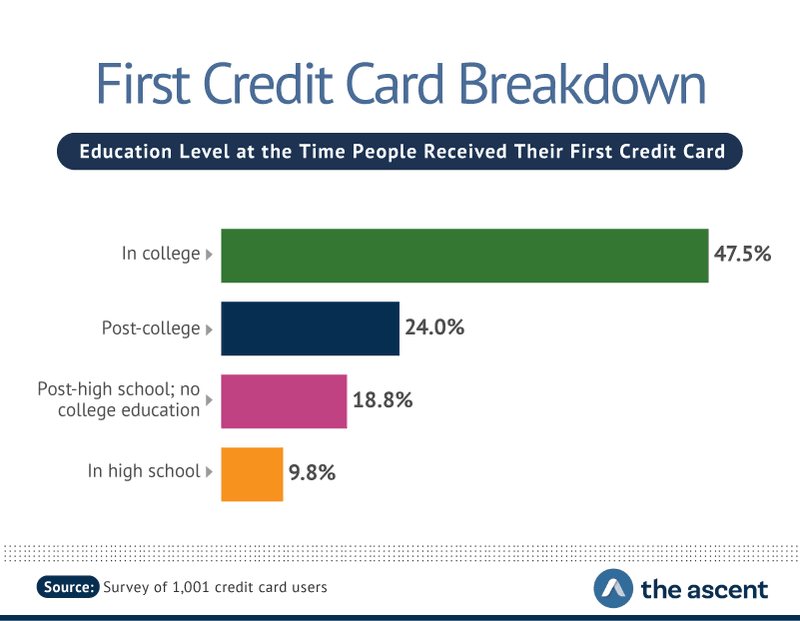 As credit card holders, many respondents believed there was some pressure to open a credit account by a certain age. While adolescents under the age of 19 were deemed too young on average to maintain an open credit profile, those polled also suggested any age after 25 might be too late.

There are benefits associated to establishing credit history earlier in life, particularly in an effort to establish an advantageous credit score. Of course, opening a credit profile without the right financial understanding or spending habits can have the opposite impact on Americans’ overall credit health. 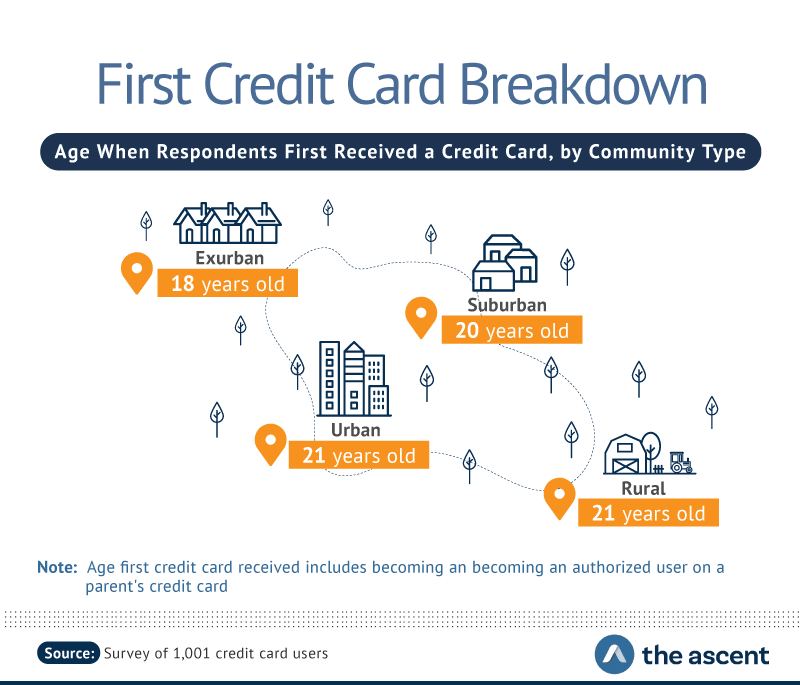 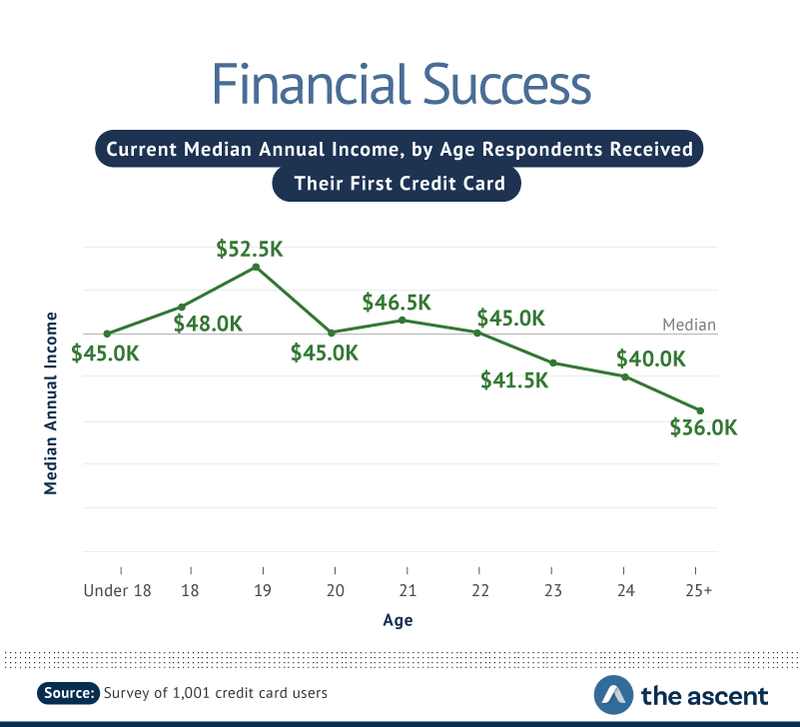 Given the young age at which many respondents acknowledged opening their own credit profiles for the first time, it was discovered that 47.5 percent of respondents were enrolled as college students at the time they received their first credit cards. While 24 percent were beyond college at the time their accounts were opened, 18.8 percent of first-time credit cardholders were high school graduates with no college education and nearly 1 in 10 (9.8 percent) were still in high school.

Living environment was also found to have an impact on the average age with which respondents opened their first credit cards. At the youngest age, exurban communities often opened accounts the earliest on average: 18 years-old. Following those living in exurban environments, suburban (20 years-old), urban (21 years-old), and rural (21 years-old) cardholders waited an average of two to three years longer before opening their first accounts. 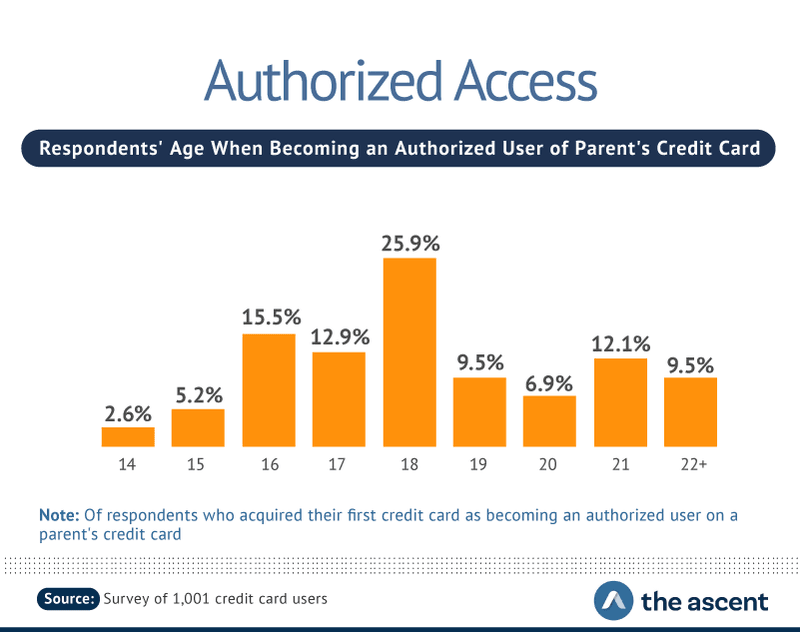 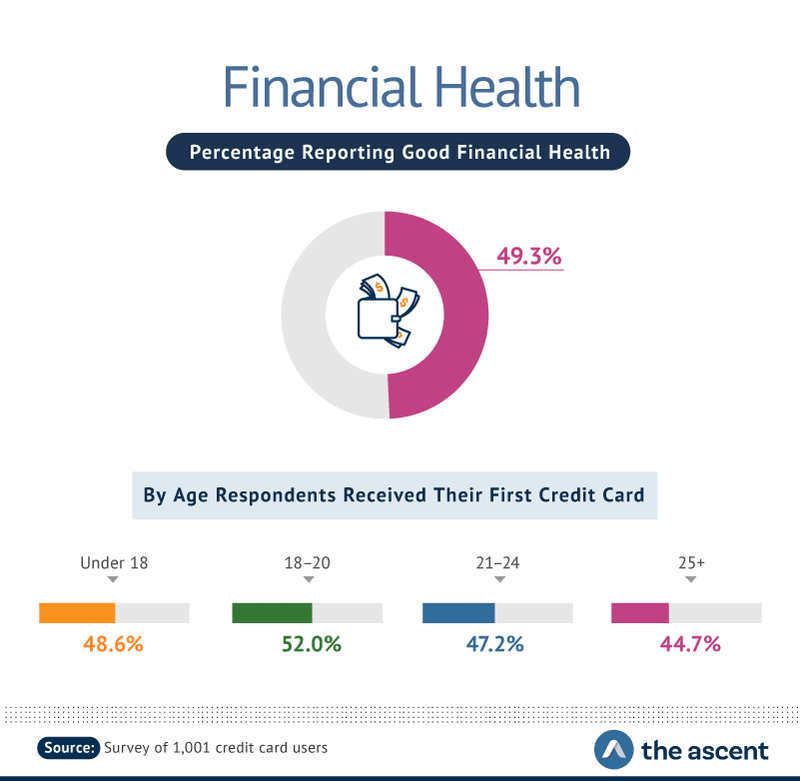 The Impact Of Financial Education

Despite being in various stages of education, income and salary play a pivotal role in the age at which Americans open their first credit cards, though higher earnings don’t immediately correlate to opening credit at a younger age. 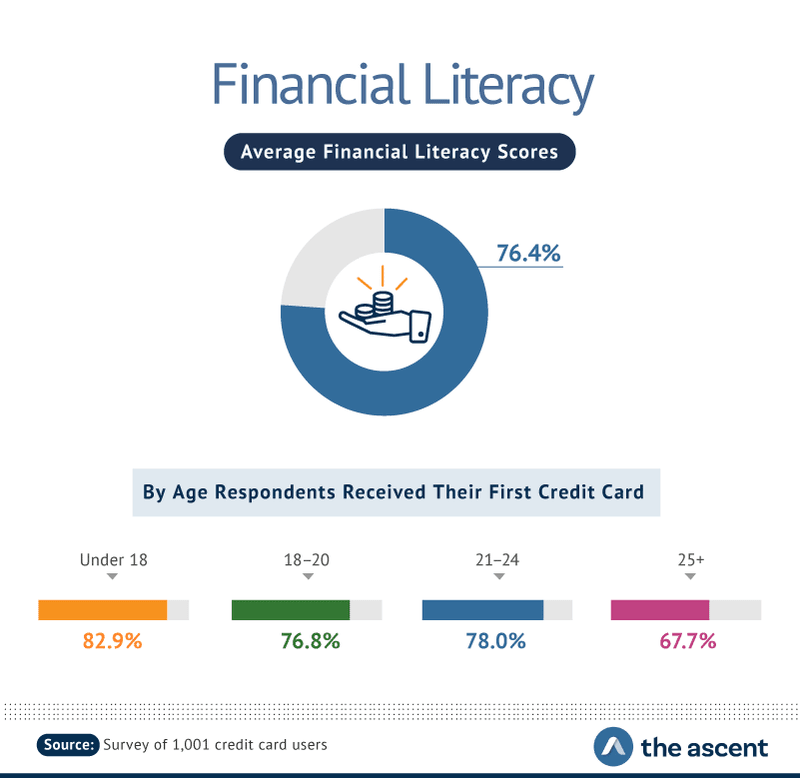 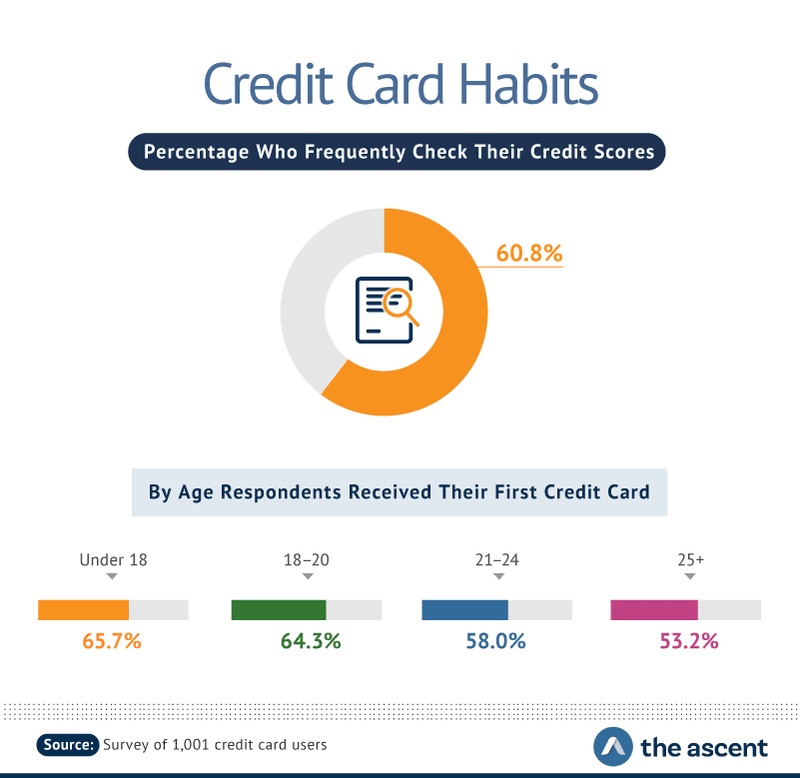 Family History And Credit Care Use

Despite the low number of users authorized on a parents’ account, a vast majority (63 percent) believe young adults are better off learning how to properly maintain a credit profile at a young age. These respondents went on to suggest parents should authorize their children on their own accounts in an effort to teach them better money management. In contrast, 1 in 10 credit cardholders would never recommend opening a credit card to anyone, regardless of age. 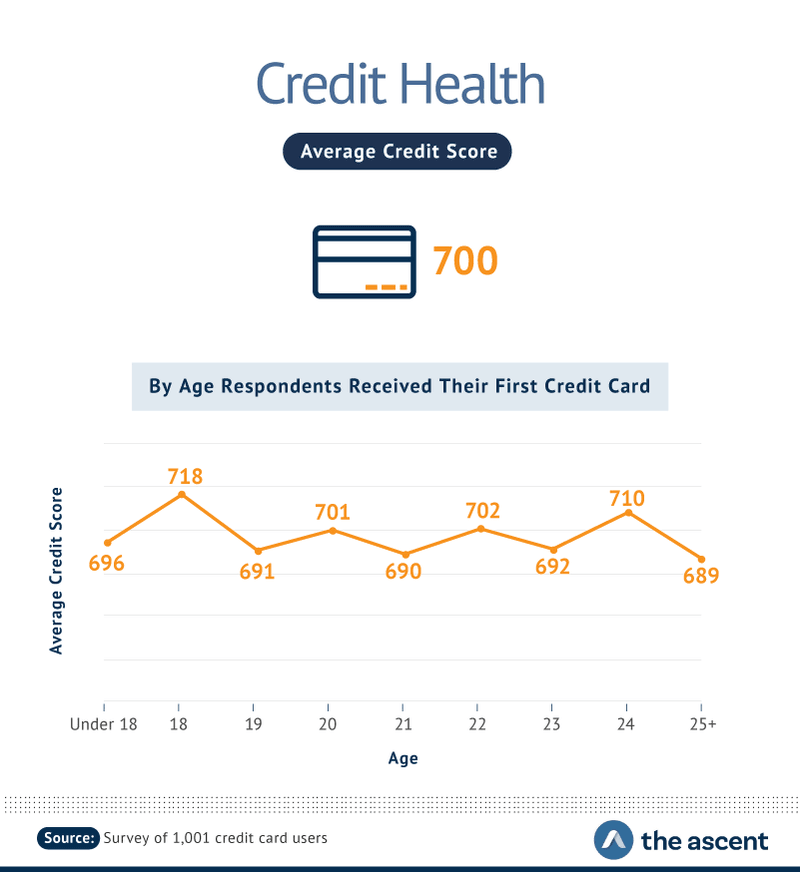 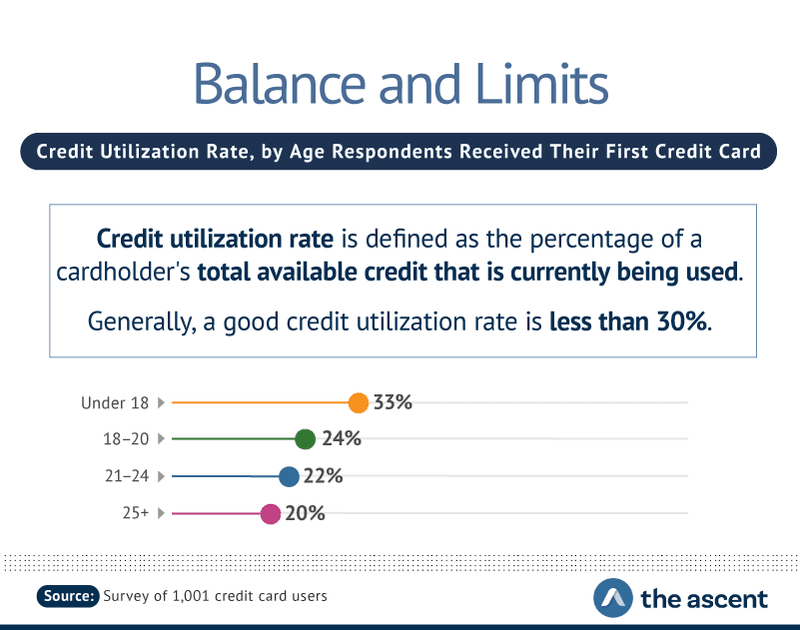 Nearly half (49.3 percent) of respondents believed they had “healthy” financial profiles, the rates were significantly increased among those who received their first credit cards earlier in life. At most, 52 percent of respondents who opened their first credit accounts between the ages of 18 and 20 identified their financial standing as healthy, followed by 48.6 percent of people who opened a credit card (or were authorized on one) under the age of 18. 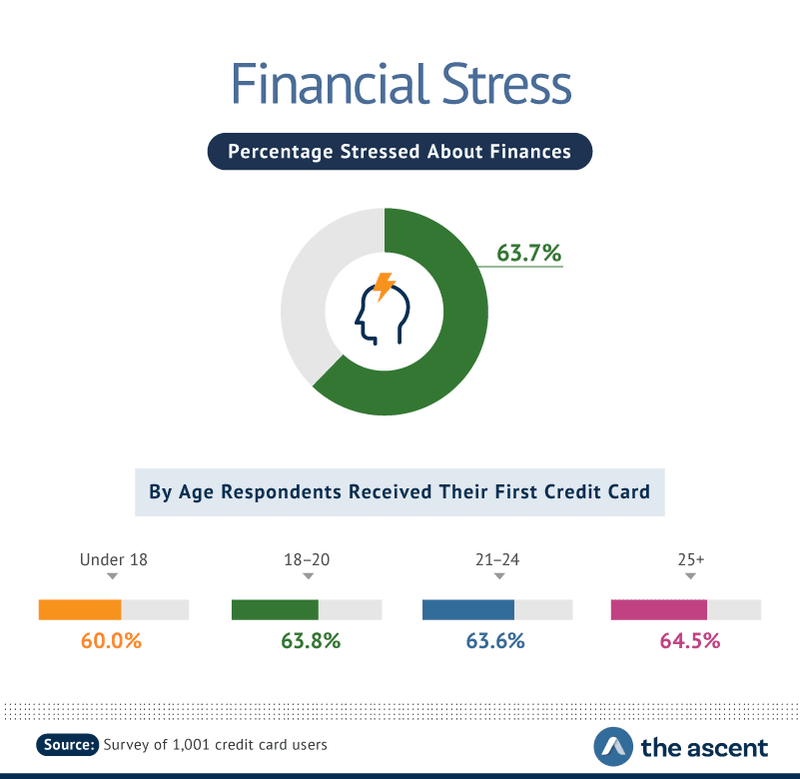 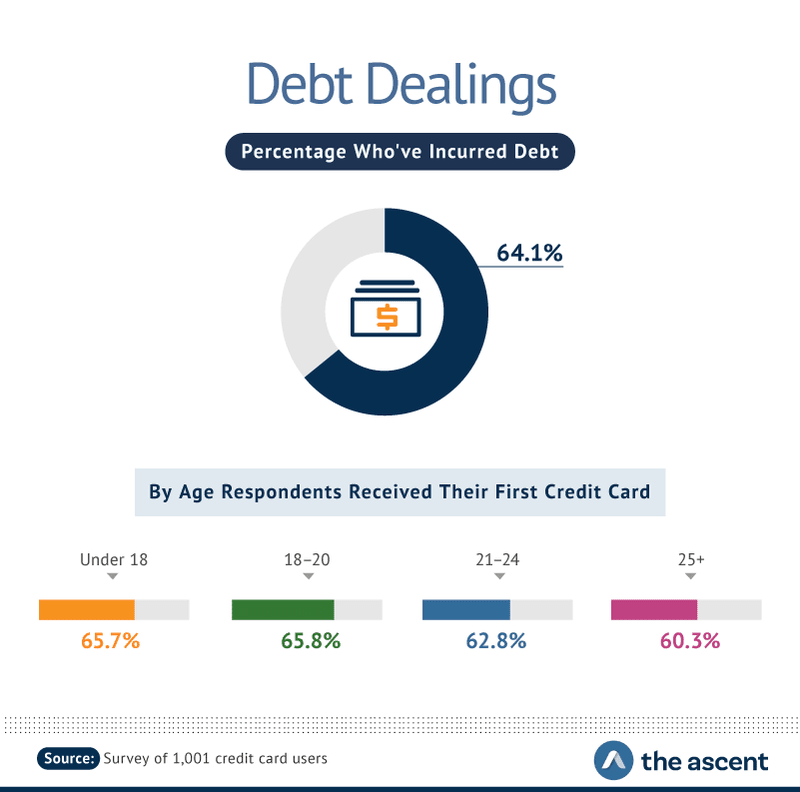 The Impact Of Age On Overall Credit Score

Despite discovering that cardholders who received their first accounts between the ages of 18 and 20 years-old often considered their credit history more stable and identified as being more educated on financial matters, they have higher revolving balances and sometimes lower credit scores.

Card holders who were authorized on their first accounts under the age of 18 had the highest overall revolving balances on their accounts at the time of this study, 33 percent. These respondents were also more likely to have a below-average credit score, 696. Respondents who opened their first accounts at 24 years-old had the highest average credit score, 710. 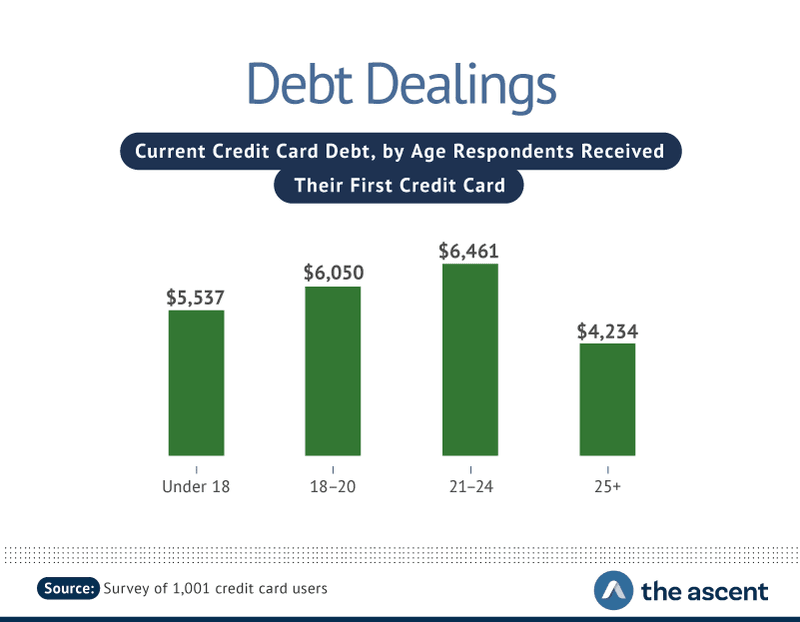 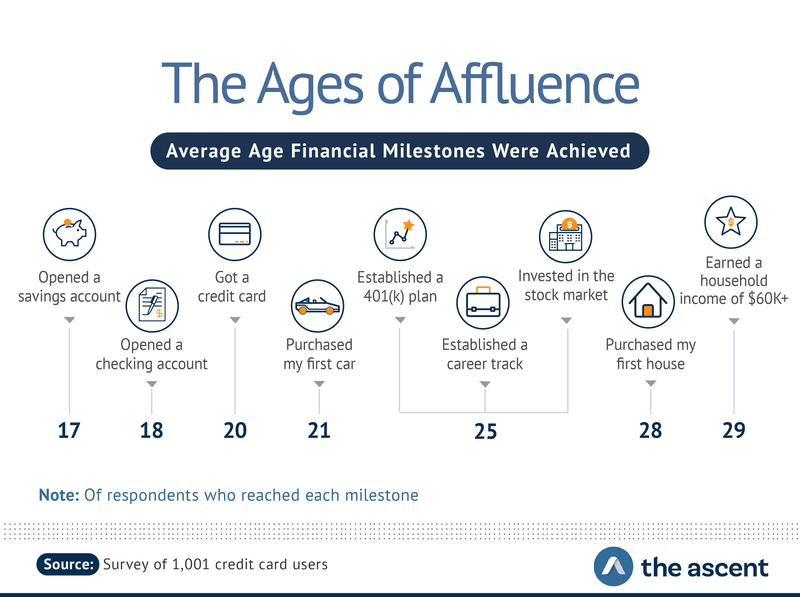 Regardless of age, the average amount of credit card debt built by respondents in this survey was $6,021.

The Average Progression Of Financial Milestones

While the average respondent didn’t purchase their first home until the age of 28, those with credit cards before the age of 20 were more likely to become homeowners at 27 years-old. 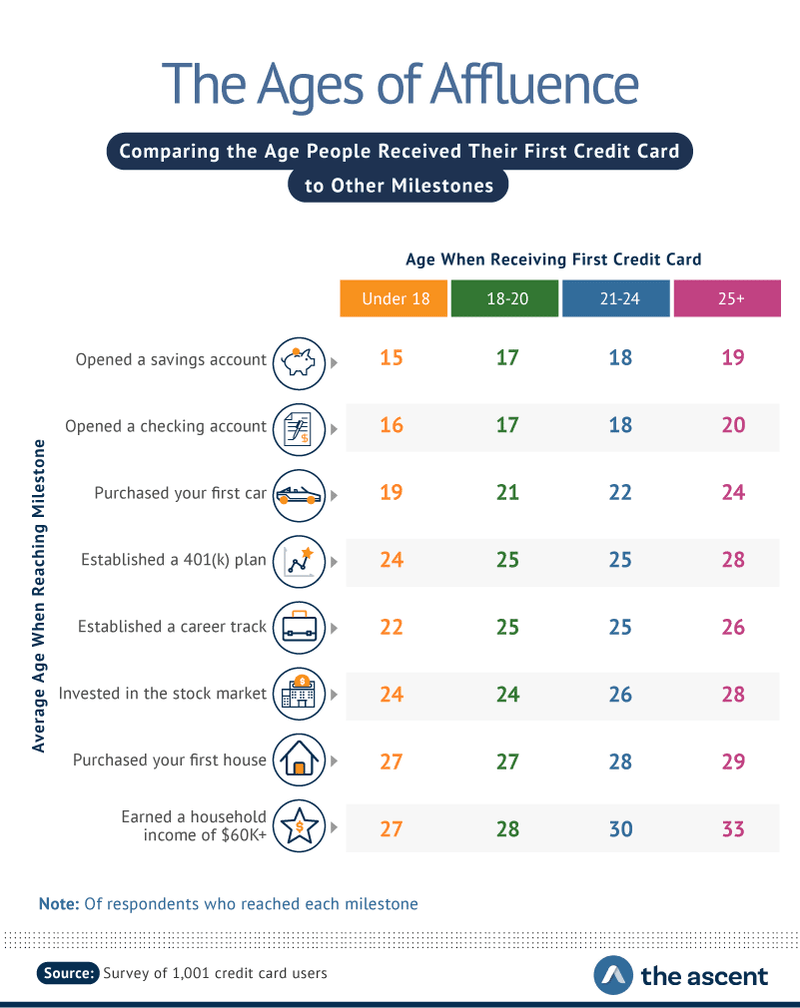