1) One reader commented on the Bristol video I just sent out: “Had to stop watching 20 seconds in. They aren’t even marketing autopilot for city streets. See screenshot below. This guy is trying to do something the car isn’t capable of doing yet.” 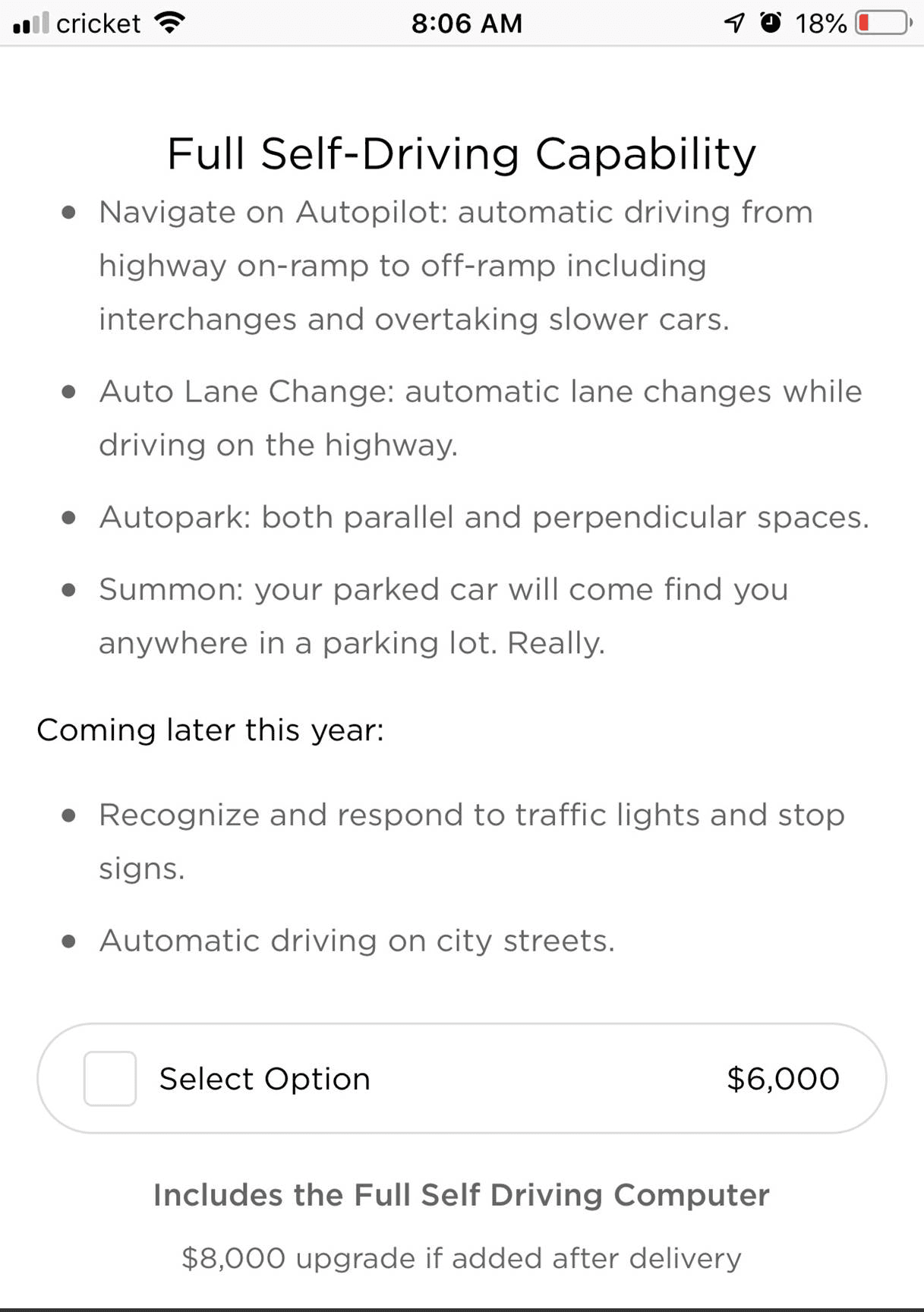 The point is that Tesla Inc (NASDAQ:TSLA) is a zillion miles from Musk’s promise of Level 5 by the end of this year and a fleet of a million robotaxis by the end of next year.

You want to do a bet for charity that Tesla doesn’t come within a year of either of those promises (on that back of which, he raised over $2 billion)?

2) Comments from a friend:

This is an outstanding video, in part also because of the driver narrating what is going on, in a most instructive way.  It also uses one of the most “normal” driving scenarios that every person in an urban area will encounter -- basically, hard to avoid for anyone.

The thing about “self-driving” is that it is relatively “easy” to come up with an impressive demo.  You can train a monkey or a child to handle one specific situation with lots of repetition or training, and then pick the one attempt that “kind of worked out” -- and then show it to the world, hailing success!

Just because a 5 year old or a monkey happened to handle a traffic situation correctly, after numerous attempts at getting it right, does not mean that you have a reliable product ready for deployment among the general population.  You need human intuition and responsibility -- and no computer has any of that.

There is the belief that adding 10x or 100x to the computer power, or adding 10x as many sensors (better cameras, better radars, better LIDARs etc) will solve the problem.  I don’t think so. The hardware is already pretty good. Yes, it will get better, but that’s not the limiting factor.

Speaking of the hardware, what if it is literally blocked or malfunctions?  Sensors can be covered in snow, ice, dust or dirt. The glass can be cracked, or a connector may be loose.  This is why your adaptive cruise control system doesn’t work in the Winter, if you live in the snow states.  If you can’t ensure this relatively simple and unavoidable scenario today -- boy, you have a long way to go.

The problem is that the real world is not a game of chess or GO.  Those are confined games with exact rules, and therefore you can program a computer to win, using brute force of calculations.

The real world has so many other dimensions of consideration compared to chess or GO.  In the real world, you sometimes have to be extra nice to people (letting an elderly person cross, even if you didn’t have to stop as a legal matter), and sometimes you have to literally run over someone to save your own life -- such as if a robber approaches your car and is in the process of drawing a gun.

Yet at other times, you have to be directed by a cop or sports field parking attendant to drive your Jeep over a slight ditch to park in that field over there.  You will have to drive off-road. How about hooking up a trailer to tow, or backing up that trailer to position it correctly to the loading/unloading ramp? Getting a computer to follow nuanced human instructions, including the most subtle signs, is more of an art than a science.  The scenarios are infinite.

This is not to say that driverless cars can’t happen forever.  I would never say never. It’s just that the problem is not close to being resolved right now, and many of the proposed remedies are unlikely to make it happen.  We may be at the 95% point of accuracy now. Or 80% or 99.9%. What it will take is something like 99.99999999999% for the issue to become socially acceptable -- and perhaps not even then.  Success is at least 7 or 8 decimal points away. It will take more than a decade. When people ask, I say it’s closer to 100 years away than 10.

Meanwhile, we already have beautiful demos, where a car can handle a specific drive.  It just isn’t real dynamic life, or anything a regular person would or should trust to transport them in the back seat on any kind of road, in any kind of weather, at full highway speeds, anywhere in America or the world.  Call me back in 40-70 years from now. Maybe.

3) An article in Forbes by a credible guy:

Readers have asked me to augment my remarks about Tesla’s Investor Autonomy Day, in which I had indicated Elon Musk decidedly and antagonistically threw down the gauntlet to bolster his stance questioning the use of LIDAR (a type of sensor that uses light and radar). In fact, he hurled the gauntlet right into the face of the rest of the autonomous car industry and those that make the devices.

In short, Musk has unequivocally become the defacto head of camp anti-LIDAR.

On my flight to Beijing last night, I had the chance to watch this 20-min video of someone using Autopilot to navigate the streets of Bristol, UK on a rainy day.

If you don’t have the time to watch it, I’ll summarize it for you: Autopilot is LAUGHABLY BAD. The driver had to intervene dozens of times – every few seconds, it seemed – to avoid MAJOR accidents.

Watching it also gave me even more appreciation for how incredibly difficult this challenge is – on a routine drive, so many weird things happen: lane lines disappear, other cars behave unusually, etc.

The friend who sent this to me commented:

I work for an AV company in Tokyo and anyone who says they are close to Level 5 automation is talking absolute nonsense.

Even the best AV companies out there aren’t remotely close to solving complex urban environments. Highways and desert (Arizona) driving is one thing, but the streets of NYC or TKO are a complete beast and no one has built an AI yet than can interpret and understand these environments well enough to even risk testing on them yet…

Bottom line, Elon’s claims are FAR from being reality.