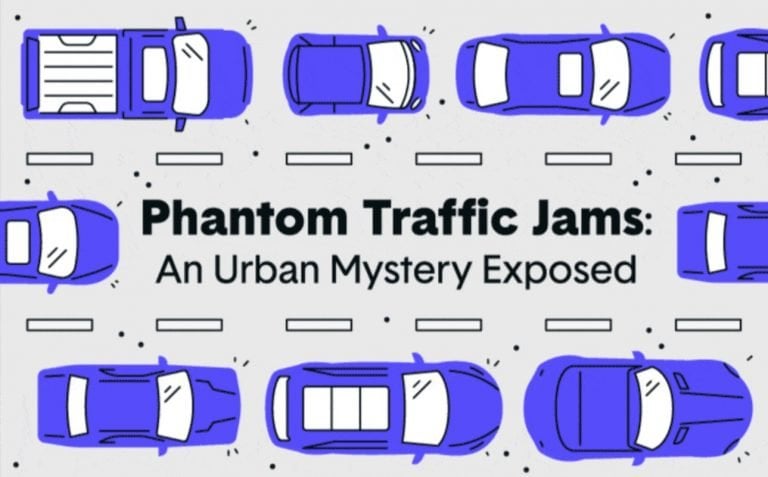 Traffic is an unavoidable problem throughout the U.S. that is often the result of wrecks, construction or the influx of drivers on the road during peak rush hour times. But what about those traffic jams that don’t seem to have a reason? These are known as phantom traffic jams and, despite there being no obvious cause, can usually be broken down into three different types. The most common cause of phantom traffic is The Bottleneck, when a major highway narrows into one or two lanes, causing all traffic to merge quickly. Minor causes of phantom traffic jams are The Wide Moving Jam, as traffic builds from cars stopping and starting at varying speeds across every lane, and The Butterfly Effect, which happens as nearby cars react to another car moving suddenly across several lanes of traffic.

The average American will lose $1,000+ each year by sitting in traffic, and if they live in a heavily populated area such as L.A., they will lose much more than that. But there are ways to help prevent these urban mysteries from occurring, and we have rounded up four techniques drivers can implement right now to help themselves be safer on the road. Two of the most important safe driving tips for the highway are maintaining a consistent speed and leaving a gap between the surrounding vehicles. Some newer cars, like the Hyundai Elantra, even offer an adaptive cruise control setting which can automate this process, allowing the car to speed and up and slow down depending on the speed and location of the cars nearby. And since 33% of crashes happen when vehicles change lanes, drivers can make smarter and safer decisions by only changing lanes on major highways when necessary.

Looking ahead, the integration of technology into major freeways and roads will help to make the issue of phantom traffic jams a thing of the past. Intelligent transportation systems will smooth out the kinks from backed up roads caused by traffic lights and offer a unique collision avoidance system. This technology will also help officials manage traffic issues in their city in a more efficient way, as entire cities infrastructure and real-life traffic times can be seen all at once. V2V and V2I technology will allow cars to not only communicate with each other, but communicate with road signs and lane markings as well, making the road a much more intelligent and enjoyable place to be for the average commuter. And while public transportation continues to be a viable option for city dwellers looking to ditch their vehicles, until these systems are automated on a city-wide scale, driving and carpooling is sometimes the only option for those who work and live outside the limits of their city.

Overall, the landscape of the modern road will change drastically over the next few years. As drivers, cars and roads continue to get smarter and public transportation begins to expand, there is no doubt that phantom traffic jams will cease to exist in the coming years.