The technology industry is by far the fastest growing in the world’s economy and shows no signs of slowing down. Research, new developments and innovation are taking place every day and driving towards an increasingly digital world, with constant breakthroughs and advancements in the likes of artificial intelligence (AI), big data, the Internet of Things (IoT) and virtual reality (VR), impacting a breadth of industries and lives as a result.

As well as being the fastest growing industry in the world’s economy, the tech sector is also the highest spending with 2016 seeing spending reach over $6.3 trillion, making it the world’s ‘third largest economic force’ in GDP terms. The United States took first place spending $18.58 trillion and then China at $11.2 trillion. Essentially, the technology industry is spending more than whole countries GDP in one year! Due to the research required to drive forward innovation and the increasing importance companies are placing on technology, high volumes of spending is key.

But with the tech industry being so large and diverse, have you ever wondered which sector is the most successful?

RS Components have analysed 214 global unicorn companies valued at $1 billion or more to find out the top 10 most successful sectors in tech: 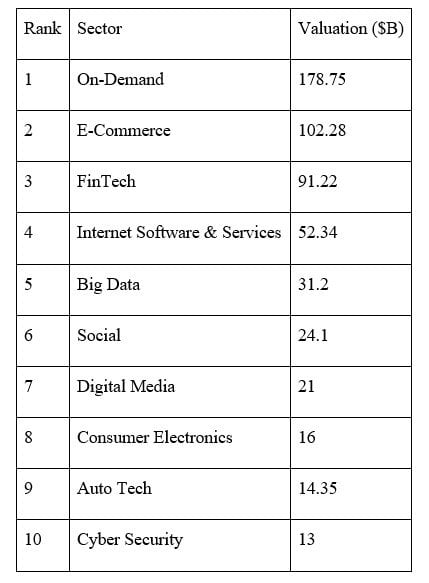 The On-Demand sector takes an impressive lead in making the most money in the tech industry at a whopping valuation of $178.75 billion. The On-Demand sector essentially involves economic activities centred around online platforms, where independent sellers are able to offer services and goods to customers. The sector is booming and is only set to get even bigger, as companies such as Uber, GrabTaxi, Deliveroo and Gett increasingly grow in popularity.

Uber, the transportation network company many of us use to get around has a particularly impressive valuation at $72 billion, making up nearly half of the money brought in by the On-Demand sector alone. This comes as no surprise when looking at the rapid growth of the company over the last decade, since it was founded in March 2009. Uber continues to invest in a variety of business areas in the On-Demand sector, from food delivery, logistics, electric bikes and even self-driving cars. This year, the company has a mind-blowing $1 billion budget for similar projects to invest in. With companies like Uber leading the way, the On-Demand sector is dominating the tech industry as it is becoming increasingly popular to the public.

The next two most successful sectors in tech include E-Commerce and Fintech, with the former making $102.28 billion and the latter making $91.22 billion. Interestingly, of all 214 companies analysed, these two industries held the highest number of businesses, with E-Commerce at 37 companies and Fintech at 31. E-Commerce, also known as electronic commerce essentially refers to the buying and selling of services online, and dates back to 1994, with the first ever online sale where a man sold a CD to his friend through his website NetMarket. Since then, E-Commerce has exploded, with the likes of Amazon leading the way and becoming the most famous and successful E-Commerce business today. The most successful E-Commerce businesses analysed was Airbnb, with a value of $29.3 billion. To top it off, the sector’s success isn’t stopping any time soon, with global retail e-commerce sales expected to reach $27 trillion in 2020.

Of all 214 global unicorn companies analysed, nearly half of them are based in the USA. This is hugely important due to the scale of the industry’s success in the world’s economy, as a lot of money being made is coming from just one single country. In second place is China, which is home to 57 of the companies, followed by India with 13. The UK comes in at 4th place, home to just 11 companies. With technology having such an impact on the world today, it is crucial to acknowledge the influence the United States is having across the world.

Over the next few years, what will be the most successful sector in tech? 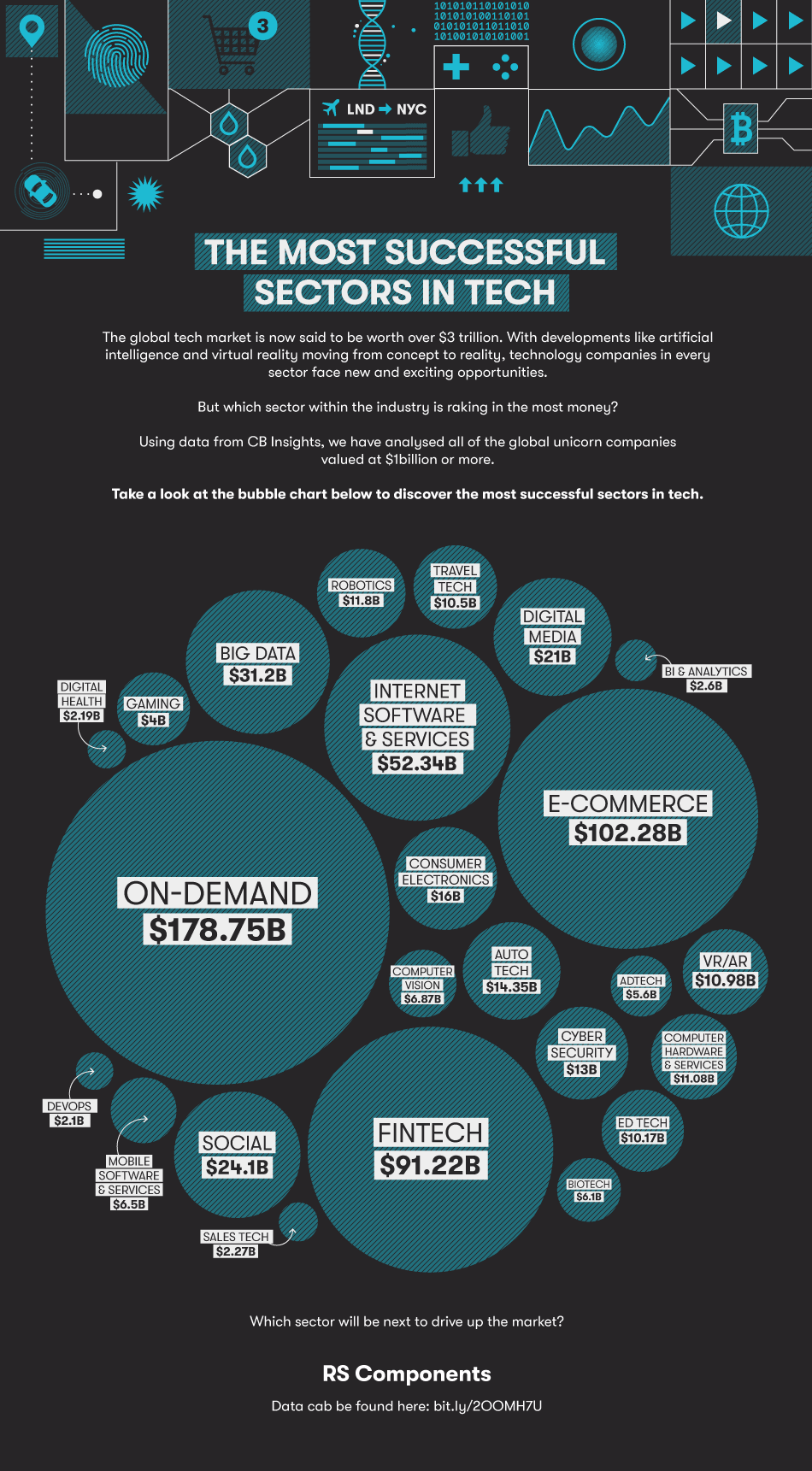