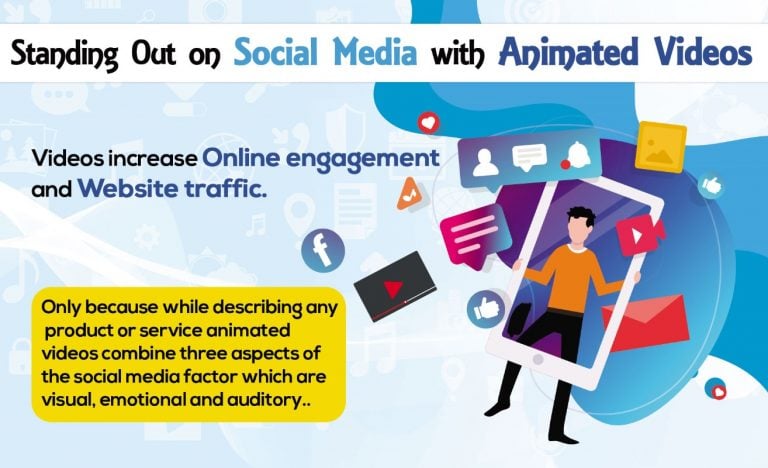 The blog entitled ‘Standing Out on Social Media with Animated Videos’ discusses how an animated video can prove to be an effective medium for the promotion and advertisement of business. It is seen that a human brain retains visual imagery more than a readable text. Animated videos in beautiful audio-visuals attract the viewers’ attention faster on the social media. These videos are short and can be customized as per your needs. Such videos are less time consuming and involve lesser production costs. Animated videos give you wider audience and can be shared by millions on other social media platforms. These are entertaining and informative at the same time. With a plethora of benefits of animated videos, it is highly recommended that one should invest in it.

Retains Attention: Animated Videos are considered to be the most effective and cheaper way to reach out to the masses. In a survey conducted, it was noted that a human has a power of visualizing 60000 times faster than reading from a text. Ninety percent information received in brain is imagery. People spend almost 2.6 times more on average if there is a video on any webpage. So, People Love videos, but why go with animated Video? Only because while describing any product or service animated videos combine three aspects of the social media factor which are visual, emotional and auditory. Videos and animation can help the sales in future stages. Animations can present introductions, bridge points and actions inside videos in a short period of time that builds a strong resonance inside the viewers for a long time. It has the ability to create conversations which will eventually make someone follow the complete story.

Simplification: Animation can make the characters do different actions like talking or walking which texts cannot. Videos find a better reception as 59% of the marketers believe that people tend to prefer watching videos over a monotonous reading of the text. It can process different kinds of work and can define any mechanism.

Make complex points fun: With liveliness, there is an awesome delicacy that enables you to improve and clarify complex topics without getting exhausted or sounding critical.
You can make any topic fun with the help of a few affected animations.Quick: Animated videos have a tendency to go viral with the blink of an eye and with a tap of our finger. It fetches us quick acknowledgement. It is a medium through which you could directly be in link with the targeted audience and earns you quick credibility. 52% of the marketers believe that animated videos are an effective way of branding .

Lesser Production Cost: Creating and uploading animated explainer videos in social media is much cost effective and low-Priced than shooting a film or live video.

Animated Videos can be a great strategy for business promotion or advertisement on the social media. These videos come with so many benefits listed below.

Pros of the animation videos

The medium is going to see a great amount of investment from the social media channels in future. Animation videos create an alarming awareness in the market. So let’s check out, why animated videos are everyone’s favorite. Here are a few reasons: