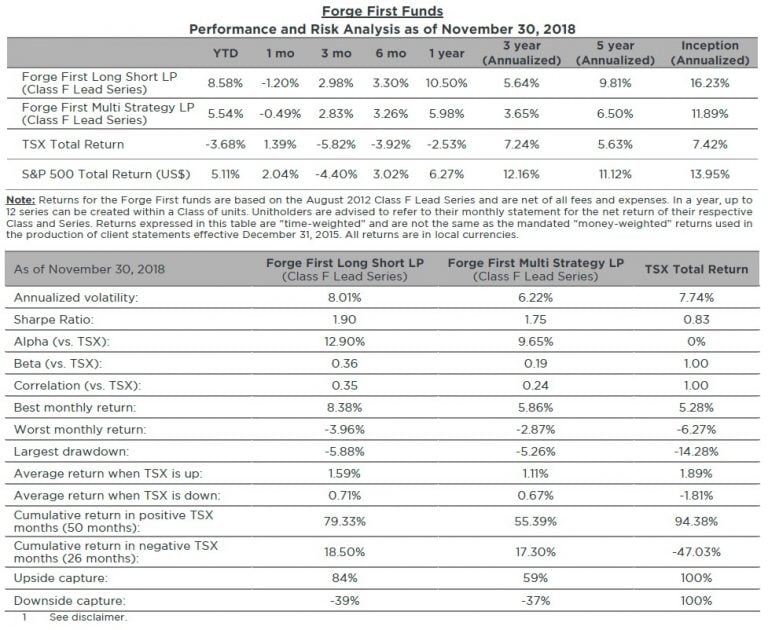 November yielded another difficult month to read for equity investors. While the performance of various indices finished in positive territory, we have been hard pressed to find anyone actually comforted by that fact. The month was full of volatility, troubling market and economic signals and ominous political developments. Perhaps the slight positive performance of both the S&P 500 and the TSX Composite were cold comfort to equity investors because of the sheer magnitude of the drop in October, making the bounce seem paltry. For us at Forge First, the month brought a slight decline with negative performance driven largely by the reasonably low cyclical exposure that we do have, namely in energy and industrials. In particular two of our highest conviction long positions, Parex Resources Inc. (PXT.CA) and Parkland Fuel Corp (PKI.CA) were a disproportionate percentage of the decline, something we truly do not believe is going to be repeated. Positive contributions came from our consumer focused companies, real estate exposure, and market protection option strategies. Unsurprisingly, TSX positive performance was driven by the most defensive sectors with consumer staples, utilities and telco’s leading the positive performance. 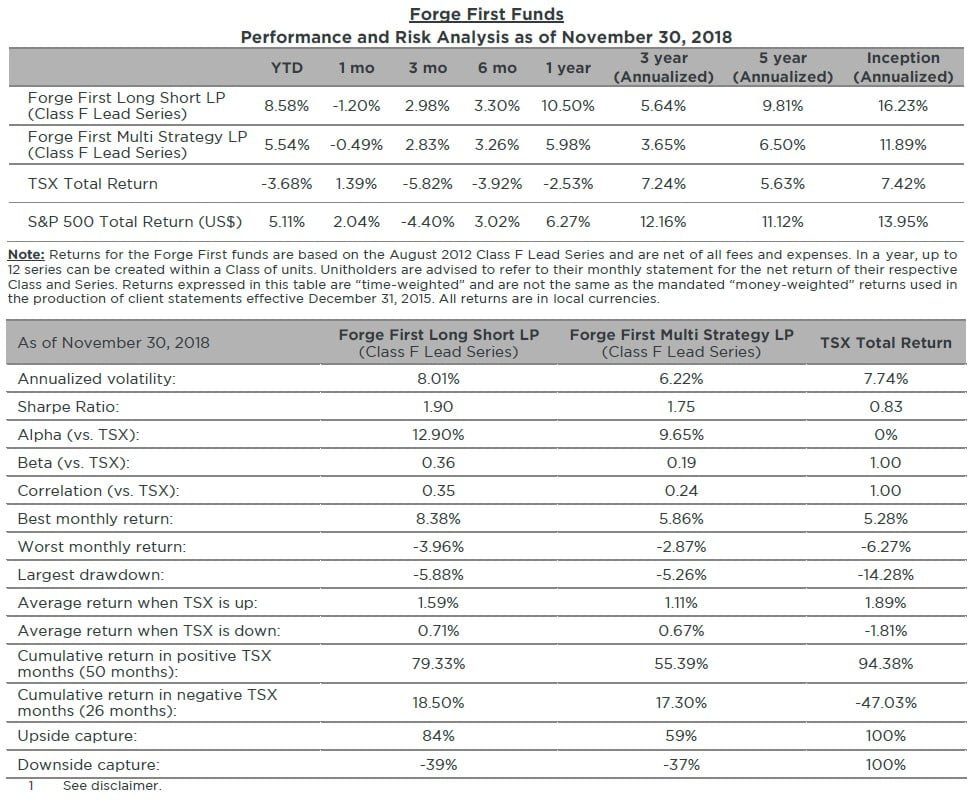 Of the many macro and market indicators we watch closely there are few as important as the shape of the yield curve and we definitely believe that interest rates are sending a message to investors. The yield on the US ten year government bond has dropped steadily since it peaked at 3.24% on November 8 with this flagship US government bond recently closing at 2.84%. This nominal yield is equal to the sum of break-even yields (a proxy for inflation expectations) and real yields (called real return bonds in Canada and TIPs in the U.S.). As can be seen from the one year graph on the below left, falling oil prices (blue) have catalyzed the decline in break-evens (white). Meanwhile, the six month rate of change graph on the below right highlights the decline in break-evens (blue) but also the dichotomy driving real yields, which as shown consists of rising expectations for growth (white) but rapidly falling term premiums (orange).

What remains unclear to us at this juncture is whether US economic growth will actually begin to slow enough to warrant the magnitude of this move. We will parse the words from next Wednesday’s U.S. Federal Reserve news release & press conference to intuit if the market’s recently reduced expectations for the number of hikes during 2019 is accurate. Also, whether the still widely (though less so than a month ago) anticipated hike in rates next week is a dovish hike, and if so, is such a view being catalyzed by either a) a Fed that is caving to the pressure being heaped on it by both the market and the President, or b) they truly see slowing growth.

Our belief is that the language from Fed chair Jerome Powell will suggest that we may see a pause in rate hikes as soon as March but not later than June. As a result, during the past month we have begun to make investments based on this idea. Further, we believe such a shift in policy would present a “game on” for a couple of our conviction trades into 2019 if the messaging is dovish in the way we’re expecting.

It would also force the investing community at large to consider the broader consequences of this rate cycle ending earlier than anticipated, including the probability of a weaker USD and the continued flattening of the yield curve. We are aware parts of the yield curve have briefly inverted of late, commanding persistent media attention and a deafening chorus of pundits predicting a recession. As we previously mentioned that is not so clear to us just yet. But either way it’s not all bad as there are both long and short trades to be unpacked here.

First, we believe it’s not a bad idea to build out some gold exposure and we have currently expanded ours to a roughly 6% weight in the Long Short LP and a 3% weight in Multi Strategy LP by acquiring shares in gold miners with strong free cash flow yields at current prices. Should we be right about a weakening USD and the end of FED hiking cycle, gold should have a nice move higher and our free cash flowing goldminers should become free cash gushing miners. As an added bonus, if we end up being too sanguine about US economic prospects and a recession is in the cards, gold should perform even better and is also likely to catch a safe haven bid.

On the short side we believe there is more fun to be had as there are some very interesting trades presenting themselves in the financial sector. The yield curve has a large influence on the profitability of lenders given that most borrow short (cheaper money, lower rates) and lend long (higher rates for the borrower) however this relationship breaks down when the long end of the curve is level with the short end, removing the incentive to lend as the spread isn’t there to capture. Given that financials make up 33% of the TSX composite it’s difficult not to be underweight the space, but our current exposure to financial equities of net short 2% could safely be described as being on the bearish side of the fence.

While we aren’t short the big money center banks just yet we have continued to add to some of our old favorites that are working quite well at the moment. One such trade is our short position in the credit card lender space, specifically Discover Financial Services (DFS.US), Capital One Financial Corp (COF.US) and American Express Co (AXP.US). Each of these names possess several of the characteristics that we look for in a short. First, as shown in the table below, they all have low short interest ratios, so the trade isn’t crowded and we think consensus shorts almost never work. Next, they all have downside beta greater than 1 which implies they participate in market drawdowns more so than the market itself and they’re all highly correlated so we can avoid single stock risk by shorting all three. Each of these three companies has high PCL to net income ratios which shows us they all have a sensitivity to provisions for credit losses, that should they go up, would hit their earnings dramatically. 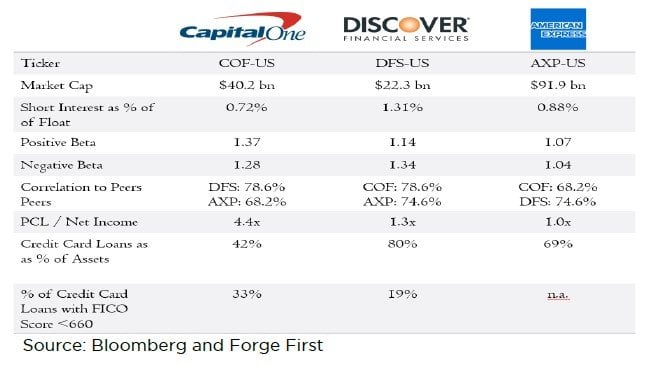 Finally and perhaps most obviously credit cards make up an outsized percentage of their loan books, typically the first consumer credit to crack in an economic slowdown. In addition, both Discover and Capital One have uncomfortably high percentages of their loans with those who have FICO scores below 660, or sub-prime borrowers.

We don’t want to sound all doom and gloom solely because it’s fashionable at the moment and we certainly think there are various opportunities to be surprised to the upside. The upshot of a weaker dollar is a milder tailwind for emerging economies, oil (while we believe it has bottomed), which trading at $20 cheaper than it did in the summer can only be construed as an economic benefit and, in all fairness, US economic numbers remain strong for now. So it doesn’t have to be all bad out there, but we thought we would take this opportunity to remind our investors that we are utilizing many strategies to protect them during these volatile times.

Remember, during the ‘bull run’ you frequently heard ‘don’t fight the Fed’! Well it works both ways. Next week’s hike would be the ninth this cycle and remember the Fed’s now shrinking its balance sheet by US$50B a month. It’s these two tightening tactics that drove the roughly 20% decline in the P:E multiple of the S&P 500 this year. This policy shift also explains why year to date the S&P 500 has had 57 daily moves in excess of 1% versus 8 last year and a median of 49 since 2010. Looking ahead to 2019, our team expects modest returns at best from broader indices, elevated risk and a greater number of opportunities on the short side. Capital preservation will replace chasing returns at the top of an investor’s totem pole.

With almost 11 & a half months of 2018 completed, the team at Forge First is pleased to be poised to offer positive returns in what’s been a rough year for the majority of financial assets. We’re thankful for the business and support you have provided us this year. Have a safe and happy holiday season.

Please do not hesitate to reach out to us if you wish to learn more about how our strategies can complement and lower the volatility of your investment portfolio. For more information please visit our website at www.forgefirst.com.