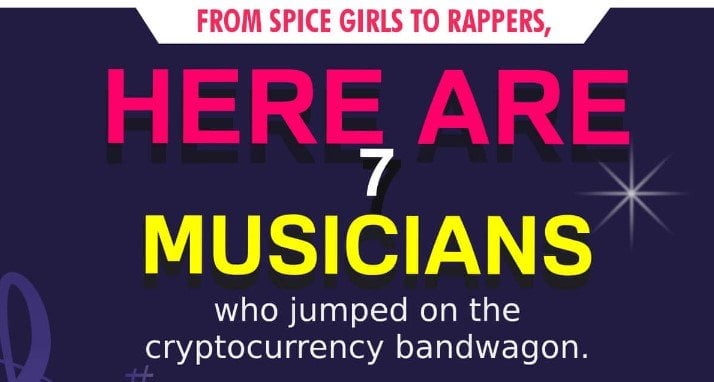 In 2001 Apple introduced us to one of its most influential – the original iPod. The humble MP3 player that ushered in a digital music industry revolution and arguably saved Apple from the brink of financial collapse. Speaking at the presentation, Apple’s co-founder, the late Steve Jobs, explained why the company had chosen to build its new flagship product around music.

These words perfectly capture the importance of the medium. Music is ubiquitous. Timeless,ever-present. It transcends boundaries and shatters language barriers. It can never be out of fashion.

The incredible success of the music industry is a testament to this. With an estimated size of $17.3 billion, according to the IFPI Global Music Report2018, it is an integral part of the larger entertainment sector. But its economic success is but a mere reflection of its far-reaching influence.

At first glance, the music industry and the cryptocurrency sector look like completely different beasts. In fact, the crypto sector appears to be a polar opposite of the ubiquitous phenomenon described by Steve Jobs in 2001. Whereas music has been around forever, crypto is still a relatively novel concept. While few people will dispute the notion that music is a speculative market, many have argued that the crypto market is driven purely by speculation. However, there is one key similarity – they both have the power to break boundaries. And because of this the two can complement each other in very interesting ways.

A common criticism often levelled at the cryptocurrency industry is that there is a lack of a real-life applications that illustrate why crypto assets could be a viable alternative to fiat currencies. This, essentially, is what drives the notion that the crypto community mostly consists of speculators hoping to cash in on the latest investment craze and criminals who only use crypto to fund illegal activities. However, the “no intrinsic value” argument rings hollow, when considering that digital currencies are running on technology that many sees as transformative.

Distributed ledger technologies, such as blockchain, are widely regarded as one of hottest emerging technologies out there, with start-ups, established corporations and even entire governments working on harnessing their potential to revolutionise industries such as healthcare, education and agriculture, among others. Earlier this week seven European Union member nations signed a declaration, vowing to promote distributed ledger technologies. DLT “can help our countries transform their economies and society into truly digital ones and become a leading region in this sector”, minister from France, Italy, Spain, Malta,Cyprus, Portugal and Spain wrote in the document.

“Due to its nature, we are of the view that Distributed Ledger Technologies can result in enhanced transparency, accountability and privacy for end-users,” they added.

The music industry could provide some of the most interesting use cases for DLT and crypto. In 2014 recording artist and song writer D. A Wallach proposed that the blockchain could be used to create a create a global database for information about music, making it easier to find information about music creators and rights holders.

More recently, the crypto sector attracted the interest of Matt Sorum, the former drummer of Guns N’ Roses and Velvet Revolver. In March of this year, Sorum announced its latest venture – a blockchain-powered live concert hosting platform and payment solution for artists.

“My interest is in cutting the middleman. “That’s been something on artists’ minds for years. There’s all these people you got to pay along the way,” Sorum told Yahoo Finance at the time. “With this technology,the money can go into everybody’s wallets automatically, it doesn’t go into a bank account where somebody’s making all that money and interest.”

Other prominent figures in the music industry have also been involved with crypto in one way or another. Some artists, like rapper 50 Centand pop icon Mariah Carrey, have allowed fans to pay with cryptocurrencies. Meanwhile, famous rapper and singer Akon has been much more ambitious. In June the Senegal-descended artist announced the creation of his own cryptocurrency tobe used in a new city in Senegal called Akon Crypto City.

Such initiatives are not only important for the music industry, but are also of great benefit to the crypto sector. Due to the ubiquitous nature of their medium, music artists are among the biggest celebrities in the world and can reach global audience. Their endorsement can help broaden the appeal of the cryptocurrencies and encourage more people to use them as a medium of exchange.

However, music artists also need to make sure that their influence is not being abused by bad actors. Just over a year ago, DJ Khaled took it to Twitter to promote an initial coin offering (ICO), led by crypto debit card provider Centra. Shortly after the promotion, the US Securities and Exchange Commission (SEC) shut down the project, as an investigation found that Centra’s alleged partnerships with credit card services were entirely false. Centra’s co-founders were arrested and charged with violating anti-fraud provisions, while DJ Khaled was fined. Fortunately, such incidents are likely to get increasingly rare once proper regulation is applied to the crypto sector and people become more knowledgeable about the sector.

Check out the infopgrahic below by Best Bitcoin Exchange