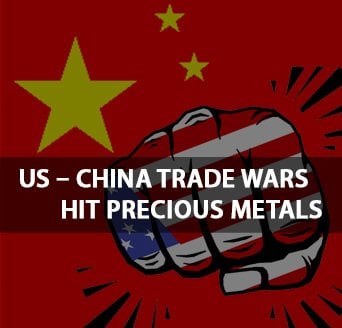 The harsh selling in gold but especially silver on Friday – down 2.3% and 4.5%, respectively – was largely the result of widespread liquidation across the entire commodity spectrum during the early morning hours. The selloff followed an announcement by President Trump that the US will impose new tariffs on $50B of Chinese imports into the States, and the follow-up announcement by China that it will, in turn, impose $34B of tariffs on US imports into its own country.

The Chinese tariffs feature a list of 545 items which will be taxed, primarily focused on commodity and agricultural products. We speculate that the Chinese announcement is designed to target Trump supporters in his typical strong areas within the Midwest and plains regions of the country.

While gold and silver were not specifically mentioned by China’s new policy, the list includes several products within the CRB commodity index, such as soybeans and orange juice. For reference, the CRB index is a composite which features a weighted average of 19 commodities including energy, precious and industrial metals, and agricultural products.

The market took a “sell first, ask questions later” approach to the tariff news, thus selling nearly everything related to commodities including precious metals. We can see the impact of the announcement across these asset classes below:

It is important to note that the selloff in precious metals and commodities was not the result of specific dollar strength – nor was it the result of the Federal Reserve interest rate hike on Wednesday afternoon. Both gold and silver rose following the Fed meeting, and the dollar and commodities were steady. Gold and silver rose further on Thursday as commodities began to soften. Finally, the announcement on Friday saw everything related to commodities – precious metals included – get dumped in the panic.

We may not like to see precious metals being included indiscriminately with commodities such as soybeans or orange juice – renewable agricultural products are fundamentally not the same as age-old metallic stores of wealth. However, our fundamental beliefs must be put aside amidst a market which is set on indiscriminately selling everything included in a commodity index.

Back to the CRB

Indeed it was selling across the entire commodity space, not just in China’s specifically-mentioned soybeans and oranges, which caused the carnage in silver and gold on Friday. So let us turn to the larger commodity complex to assess the damage. It is critical that investors recall the context for the commodity space – the CRB index is still just rounding off 40+ year lows:

From the zoomed-in 3-year chart above, we can see that the commodity complex has failed to break out from its bottoming formation above its 2015 – 2018 resistance zone (black). Initial support is now being seen in the 195 region on the CRB, which represents a short-term trendline from mid-2017 (teal color). Yet the weakness being seen in soybeans and other agricultural commodities leads us to believe this initial support will not hold. In that case, the next area of support for the CRB exists near 177 or approximately 9% below present levels. This support represents the confluence of visible buying which took place in the commodities on repeated occasions during 2016 – 2017 (black lines), which will soon meet with the rising (blue) trend of buyers which began at the 2015 bottom.

It will be important for this 177 support region to hold for broad commodities on any weakness so that the bottoming attempt can maintain structure. The sector still has the potential to round up from its long-term lows this year, and for the entire 3-year bottom to represent a secular trough across most commodities. Again, the significance of the commodity sector being able to round out of its base above the 2015 – 2018 resistance zone is paramount. A failure of commodities to maintain rising support would argue – while the absolute downside is limited – that a period of extended basing price action to last well into the next decade is more likely than a new rising. Such was seen from 1984 – 2002 as the sector oscillated but essentially moved nowhere as a net sum for nearly two decades:

Takeaway on Trade Wars and Commodities

Politics aside, trade wars between the United States and China, the world’s two largest economies, will continue to put downward price pressure on whichever products or commodities are targeted by each country. Commodities are just rounding off 40+ year lows, arguing that absolute downward risk is inherently limited.

However, negative price performance in select commodities and/or the entire CRB index threatens to weaken the structure of the bottoming attempt that is presently underway. A market must maintain a defined advancing structure in order to avoid grinding or sideways-price action which can last for years or decades. Silver is especially vulnerable to weakness across the broad commodity markets.