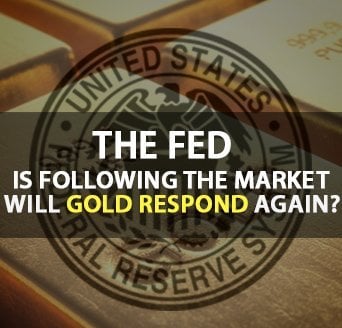 This week on Wednesday (06/13/2018), the Federal Reserve will gather for its once-per-six-week meeting on monetary and interest rate policy in the United States. We have demonstrated how since the first interest rate hike of the present cycle in December 2015, five out of six rate hikes have corresponded nearly-perfectly with significant price lows for gold. The following chart shows the exact dates of all the prior Fed rate hikes and the corresponding gold price:

The futures market continues to price in a high probability for a rate hike on Wednesday, now at a 91.3% odds of a quarter-point increase. Yet as either a confirming or negating indicator, we employ a separate prediction model which relies on US 3-month treasury bill yields as a leading signal (below, green callouts). Note how 3-month yields have spiked above clearly established ranges 4 – 12 weeks prior to each Fed rate hike since 2015.

What we observe once again over the past eight weeks is another spike in 3-month yields, which have now risen to a new multi-year high of 1.93% (far right, red callout).

[Side note: what we are observing is that the central bank is itself taking its direction from the US treasury market. US short-term bonds are selling off (thus spiking rates) weeks or months before the Fed decisions. The Fed is therefore not so much setting interest rate policy as much as it is mirroring the debt market. This supports the narrative that the Fed is a reactive, not a proactive institution.]

In sum, the above leading model suggests there is a substantial likelihood of a 7th interest rate hike at the upcoming Wednesday meeting, the decision for which will be released at 2 PM EST.

As we can see, since 2015, there has been only one interest rate hike that did not correspond with a significant low in the gold price: June 2017. At that hike, the Fed first introduced its new policy of “balance sheet normalization,” a euphemism for selling some of the nearly $3 trillion in bonds that it had purchased with freshly-created electronic money in the ten years following the 2008 credit crisis. The market took that June 2017 statement to mean that the Fed was set to notably tighten the money supply, which would in turn lower inflation. Gold fell for two more weeks, only to bottom in early July 2017 and abruptly reverse course as traders began to doubt the legitimacy of the Fed’s intentions. Following the initial sell-off, gold rose $160 over the next two months.

In sum then, every interest rate hike of the present cycle has seen an important gold low form either immediately on the day of the decision, or within two weeks following. And so once again we see gold stuck underneath the overhang of sellers who still exist between $1,302 – $1,307, just days before the next anticipated rate hike. Clearly, if gold witnesses the same type of buying that it has over the past 2.5 years following each rate hike (arrows, above), such will be sufficient to dislodge those sellers in the low $1,300’s and then see gold challenge 2016 highs near $1,378 again. Let us thus monitor the price action following this Wednesday’s Fed decision closely.

Takeaway on Gold Before the Fed Meeting

Gold is showing signs of wanting to stabilize, yet a clear overhang of sellers still exist in the low $1,300’s. Not considering this week’s Fed meeting, lower prices still fit within our model through mid-summer. Yet if the repeating pattern of strong buying occurs again following the predicted Fed interest rate hike, this may finally prove enough to dislodge those stubborn sellers for good. When the 2016 peak is finally exceeded for gold, a new price trajectory from the past two years of consolidation appears set to begin.