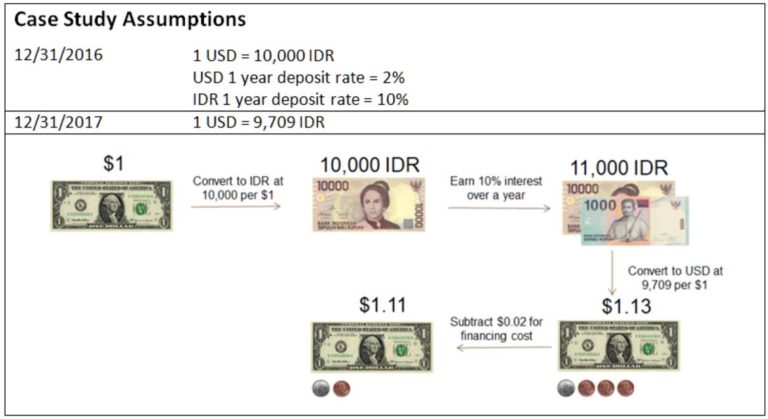 FX carry is the enduring financial anomaly. Eugene Fama described its success as “startling” in his seminal 1984 paper (Forward and Spot Exchange Rates). Theoretically, FX carry should not work. Empirically, it does.

It is the wind in the sails of many strategies containing global fixed income. Emerging market equity returns can also be positively affected by FX carry due to the higher yields generally available in emerging market currencies.

Trump is throwing down a challenge to any politically convenient trading partner with whom the U.S. maintains a significant trade deficit. We can anticipate tit-for-tat tariffs, some of which have already begun. This is the logical economic and political response to unilateral U.S. action.

To paraphrase Clausewitz, FX policy is a continuation of (trade) war waged by other means. Governments often devalue their currency to alter the terms of international trade. Imports get expensive at the same time that exports get cheaper. If trade wars are indeed upon us, FX volatility is likely to rise.

Financial markets will react to short run changes in exchange rates, causing knock-on effects in both global bonds and equities. We’ll examine the repercussions through the prism of FX carry. Though it is itself a naïve, standalone strategy, the carry trade is usually embedded in global bond and equity investing when the investor’s home currency is a developed market currency (e.g. U.S. dollar, Japanese yen, Euro).

In this 3-part series, we examine FX carry and its remarkable yet often unnoticed role in foreign security returns. In this installment, we examine:

At the dawn of currency derivative trading, John Manyard Keynes was an avid currency speculator. He was an insider’s insider if ever there were one, guiding formative policy debates from Whitehall. Such personal connectedness and years of writing on foreign exchange (Indian Currency and Finance  was his first book, published 1913) should have enthroned him as the premier currency speculator of that or any other era.

Between World Wars I and II, the sophistication of his fundamental, informed analysis was as spectacular as the trading losses that nearly sent him into bankruptcy. In If You’re So Smart: John Manyard Keynes and Currency Speculation in the Interwar Years (Olivier Accominotti and David Chambers), the authors note, “… Keynes would have performed more strongly… if he had selected currencies by following a combination of the naïve technical carry and momentum rules rather than his own analysis of macroeconomic fundamentals.”

In investing, the most fundamental law of profit and loss is, “Buy low, sell high.” The thesis of FX carry is simply and precisely that.

FX carry is sometimes associated with “picking up nickels in front of a steamroller.” The “nickels” aspect refers to FX carry’s modest, bond-like returns. “Steamroller” captures the moments of terror when the strategy gets quickly cratered by sharp losses.

The possibility of small gains and large losses may remind you of bond investing, and that’s no accident. FX carry is bond investing in a different guise. The strategy relies on interest rate differentials across currencies; therefore, we’ll explain FX carry within the framework of multi-currency fixed income investing.

The strategy continues to be profitable over the long run, to the great annoyance of those who believe in efficient markets. Many doctorate dissertations have been written in an attempt to explain why positive risk-adjusted returns persist. This is an area of finance where reasonable minds often disagree.

Regardless, it is advisable to be both open-minded and skeptical on whether such positive returns can continue in the future.

What Is FX Carry?

FX carry is a pairs trading concept that combines these two elements:

The carry trade can be implemented in many ways. One can use currency forwards, bank deposits, local currency sovereign bonds, or local currency corporate bonds.

Though the purest expression of the FX carry trade is found in currency forwards, the intuition for carry trade mechanics is best gained by looking at simple bank deposits. The key concept is a pairing of lending and borrowing, i.e. financing a long currency position with borrowings in a different currency.

This diagram traces the sources of return for a simple carry trade: IDR interest income, USD interest cost, and FX return. An IDR deposit yields 10%, compared to a USD deposit of 2%. You engage in the carry trade when you “borrow” in USD (paying 2%) and “lend” in IDR (receiving 10%). The combination of USD loan and IDR deposit creates an 8% yield premium – an example of “positive carry.”

The financing cost of 2% can be considered either explicitly or implicitly. It is explicit if the carry trader were to borrow $1 and pay a 2% per annum financing cost (we ignore bid/ask spreads on short-term borrowing and lending rates for ease of explanation). This combination of funds borrowed and funds lent creates a zero net investment carry trade.

The financing cost is implicit if no borrowing occurs. If the carry trader were to self fund the trade, i.e. provide the initial $1 of capital, the financing cost is still present in the form of opportunity cost. The 2% yield on a USD deposit is foregone by investing in the IDR deposit. To calculate the true gain/loss on the IDR deposit, this foregone income is incorporated in the calculation.

Regardless of which way one interprets the “carry”, this pairs trade nets an 11% return on investment. The 8% difference arises from the carry that was provided by the Indonesian bank deposit, net of the financing cost used to fund that IDR deposit.

The IDR deposit will be profitable to the USD based investor as long as the IDR does not depreciate enough to erase the positive carry of 8%. If the IDR depreciates more than 8%, this negative currency translation effect will overwhelm the 8% carry, generating a net loss.

The carry trade above has 3 drivers, two of which combine to create the “carry”:

Typical Retail Spot FX Trading is NOT the Carry Trade

The pairs trading concept is carefully articulated above to minimize confusion. You may hear that FX carry is “buying a high yielding currency and selling a low-yielding currency.” Buying and selling currencies in the spot FX market alone is not carry trading. It is the type of intraday trading in which FX punters engage. Because it excludes the carry component, such trading is pure currency speculation, not investing.

In this type of trading, you keep the virtual IDR bills in your virtual pocket. You do not put it in an IDR deposit. IDR appreciates 3% over the next year. You are happy because the IDR now buys you more dollars. Despite that gain, you could have made more. The IDR in your pocket does not enjoy the 8% positive carry created by the IDR interest rate differential vs. the USD.

One can easily see why this type of currency exposure is suboptimal. It is similar to keeping cash under a mattress, except, you’re keeping cash from different countries under a whole bunch of different mattresses. Yet millions of retail currency speculators worldwide do exactly this by engaging in spot FX trading on an intraday basis.

Currency in itself generates zero income and has no utility, aside from satisfying immediate liquidity needs. Pure currency exposures produce only translation gains and losses. When you hear pundits quip that FX is not an asset class, this may be what they are referring to.

Currency forward trading is the most efficient way to implement the carry trade, but retail investors generally do not have access to the type of legal documents and collateral agreements necessary to trade such currency derivatives.

The greatest source of profits in retail FX trading may accrue to providers of FX trading courses who generously, albeit with a small fee, share their knowledge on FX trading without trading substantial capital of their own.

Retail trading is estimated to comprise about 15% of the $1.7 trillion traded per day in global spot FX (Downsized FX markets: causes and implications, Bank for International Settlements). In fact, heavy retail participation could be one of the many reasons that the FX carry trade tends to work over the long run.

Why FX Carry Is An Anomaly

In his magisterial Expected Returns, Antti Ilmanen looked at currency carry returns in developed markets since 1983, and surveyed other sources for the pre-Bretton Woods period before 1983. He comments, “Over all these windows, currency carry provides better risk-adjusted returns than static asset class premia in equities or fixed income.”

If we consider 2 alternatives:

Why? Otherwise, we could make a riskless profit (barring sovereign or bank default) by preferring one deposit currency over the other.

The Forward XR is a tradable security known as a currency forward, and is part of the $5.3 trillion in currencies traded daily (source: Bank of International Settlements). Forwards are priced according to this interest rate parity framework, although deviations are frequently possible, especially in emerging market currencies.

And here we have the crux of this finance anomaly. Interest rate parity suggests that the IDR should depreciate from 10,000 to 10,784 (enough to neutralize the IDR deposit’s 8% yield advantage). Over the long run, however, full convergence to this forward rate tends not to happen.

For the carry trade as a whole to become unprofitable, the exchange rate must not only depreciate, but also depreciate past the break-even rate of 10,784 IDR/USD. Effectively, the trade begins with a profit, and the spot exchange rate must move against the position in enough magnitude for the trade to begin losing money.

The idea of “indifference” may be a critical factor in the persistence of FX carry trade profits in emerging markets, where limits to arbitrage exist in the form of capital controls and inter-country tax differences. Some investors may also require a better than “fair” interest rate on the IDR deposit to engage in the carry trade. This is because Indonesia is perceived as having higher sovereign risks, and has regulatory barriers to the free conversion of IDR to the USD and other hard currencies.

In other words, investors may require a risk premium to buy such currencies. Countless studies have examined the record of FX carry strategies, and over the long run, returns are stronger and more robust than in most other asset classes.

In fact, an astonishingly simple global FX carry strategy, using the 28 most liquid currencies and the same mechanics described above, would have generated 9% returns over the past decade with a Sharpe ratio of 0.8 (12/31/2007 – 12/31/2017, source: Tullett Prebon, Jirisan calculations). That bests the S&P 500’s 8.5% annualized return over the same period, with a 0.5 Sharpe ratio). Standard deviation of returns was slightly lower and drawdowns were significantly lower.

Because the strategy often involves leverage, optimistic traders can easily lose all their capital. Up to 200x leverage is available in some trading venues. However, when normalized for volatility, drawdowns are no worse than for overall fixed income assets. With the modest amounts of leverage taken in a diverse basket of currency pairs, the strategy is generally no more volatile than corporate bonds.

In the next installment of this series, we examine the FX carry trade as it relates to foreign bond investing.