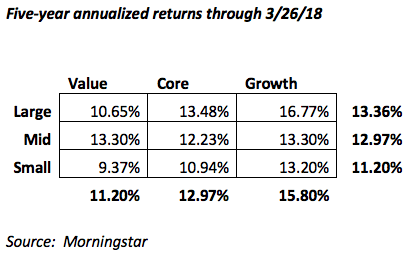 So-called “smart-beta” strategies hasn’t been all that smart lately – at least not for the last five years. This article will examine why, whether it was predictable and the likelihood it will work better going forward.

Factor tilting, quantitative strategies that are weighted by something other than market capitalization, such as size and value, have been around for decades. They were first popularized by Nobel laureate and University of Chicago finance professor Eugene Fama and Dartmouth College finance professor Kenneth French. Often lost in their work was the fact that they never said those two factors were a free lunch that invalidated the efficient market hypothesis (EMH). Thus, I don’t agree with anyone referring to factor investing as “arbitrage,” since arbitrage is a riskless excess return based on inefficient markets.

Value and small-cap are expected to deliver excess long-term return as compensation for taking on more risk. One way of measuring that risk is with standard deviation, though few would argue that historic volatility adequately measures risk. While value may have a lower historic standard deviation than the broader market, those companies are typically weaker and riskier.

According to Morningstar, during the past five years, virtually the opposite of what would be expected over the long-run actually occurred. Large-cap bested mid- and small-cap while growth trounced value. In fact, large-cap growth turned in a 16.77% annualized return while small-cap value earned only 9.37%. That translates to a five-year 117% cumulative return for large-cap growth, or more than twice the 56% return for small-cap value.

Today there are many more factors than the original beta, size and value. According to Rich Wiggins, there are now more than 300 published factors and over 4,200 smart-beta indexes. More than 40 new factors are discovered annually. Morningstar refers to these smart-beta funds as strategic beta, and, according to Ben Johnson, director of global ETF research for Morningstar, the majority of strategic-beta ETFs have failed to deliver over the past one to three years.