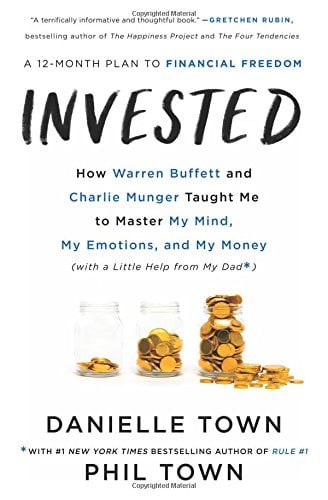 Danielle Town’s “12-month plan to financial freedom,” Invested: How Warren Buffett and Charlie Munger Taught Me to Master My Mind, My Emotions, and My Money (William Morrow, 2018), written with help from her bestselling author father Phil Town, is much better than the search-tag-filled subtitle would lead one to believe.

Invested: How Warren Buffett and Charlie Munger Taught Me to Master My Mind, My Emotions, and My Money (with a Little Help from My Dad) by Danielle Town, Phil Town

The setup is this: Danielle Town, a young lawyer, had always tuned out when her father, author of Rule #1 and a motivational speaker, had tried to get her to invest. But she eventually realized that, without investing, she would end up a wage slave for her entire life. And so, she finally decided to become her father’s student—and, having some of the entrepreneurial instincts of her father, to do a podcast of their conversations, and then to write a book based on these podcasts.

Danielle Town had two hurdles to overcome in order to become an active investor. First, she “was never one for numbers.” Second, and more devastating, she was terrified of investing. The first month in her 12-month plan thus dealt with “becoming brave.” Describing her fear, she writes: “I feel like I’m entering a dimly lit parking garage through an enclosed concrete stairwell with heavy doors at both ends, and I didn’t pack my pepper spray because it didn’t fit in my clutch and also I was afraid I would accidentally set it off in the crowded bar, and yes I had a few generously poured aged bourbons and still my radar is going off, saying, ‘Girl, don’t go into that concrete stairwell.’ … There are two types of people in the world—those who look at the Enclosed Concrete Stairwell and think nothing, and those who look at the Enclosed Concrete Stairwell and think, There’s a good possibility that this won’t end well for me. The first type is, more often than not, men; the second type is generally women. … [M]y instinctual reaction to the idea of investing in the stock market was GET THE HELL OUT OF THAT ENCLOSED CONCRETE STAIRWELL AND CALL AN UBER, IT’S WORTH THE SURGE PRICING.”

Even though Warren Buffett would probably have told her to put her money in an index fund, her father wanted her to get returns closer to Buffett’s than to the S&P 500. And she wanted to invest in companies whose mission and values she could support. So, in months two through twelve, she learned about value investing à la Buffett and Munger, how to compile an antifragile portfolio, when to sell, and living thankfulness.

Invested is an inspirational book for the unwilling investor. Even though many people who read it will get only as far as buying an index mutual fund, it might speak to a new generation of potentially active investors as well. But those who are galvanized to invest on their own should understand that one book doth not a successful investor make. Nor, as Town points out, does one year. “There’s still a lot to practice.” And to learn.