ValueWalk
Home Top Stories Looking at The Global Consumer – The Next Recession Will Likely Stem...

If you’re a follower of geopolitics, you know that Americans get blamed for the 2008 global financial crisis.  In postulating at what might cause the next recession, there’s a good chance that China could be the initiation point.  Here’s a look at the global consumer and why China is now so important.

Before looking at consumers across the globe, here’s a look at retail sales in the U.S.  After weak figures in January and February, retail sales came in healthy in March, with year-over-year growth at 4.5 percent. 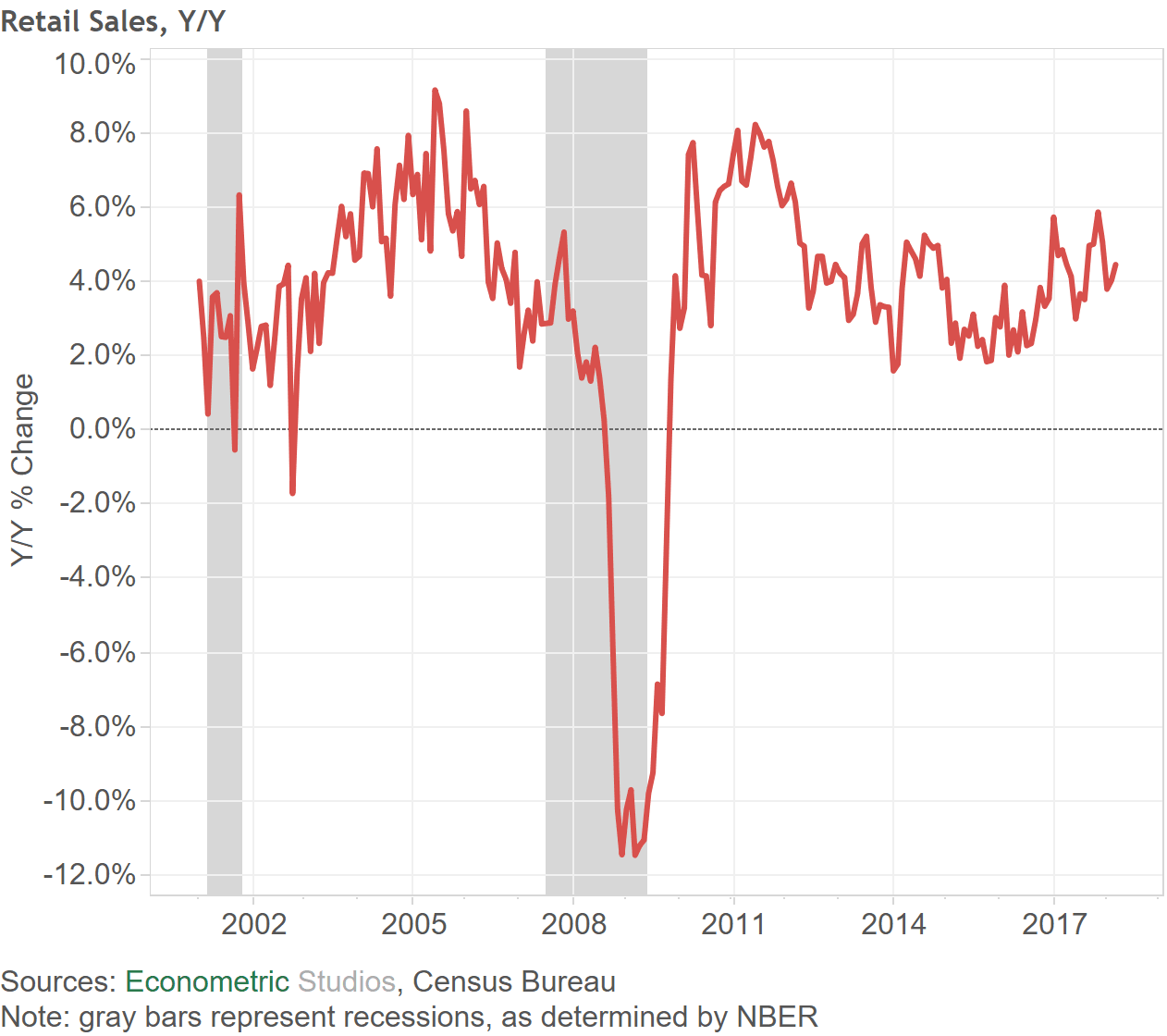 Here’s another look at retail sales in the U.S.  Perhaps the most surprising detail of American retail sales is the rise of restaurants and online sales (in the Census Bureau’s reporting, this is known as “Electronic shopping and mail order houses”).  By 2020, there’s a good chance that sales by restaurants will surpass spending at grocery stores.  Less likely, although it could get close, is that online sales could surpass both restaurants and grocery stores as the top area for American consumers.

Simply put – American demographics are changing, and it’s showing up in retail sales. 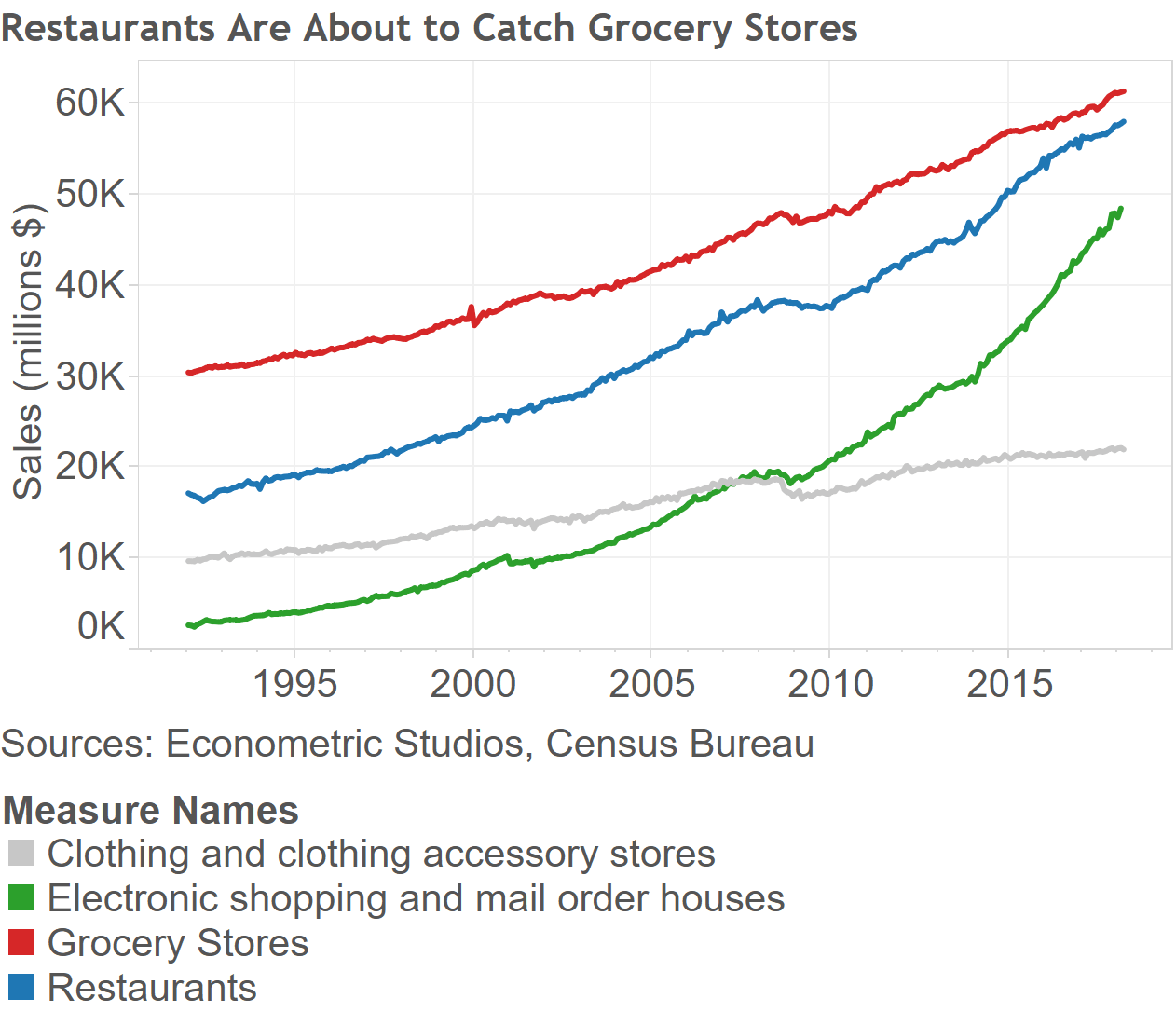 Shifting to China, here’s the picture for the Chinese consumer.  The Chinese consumer is expanding their spending at almost a 10 percent clip.  That’s down from the heydays of 2012 to 2014, but a chunk higher than the consumer spending growth rates in all the other large economies for which we have reliable data. 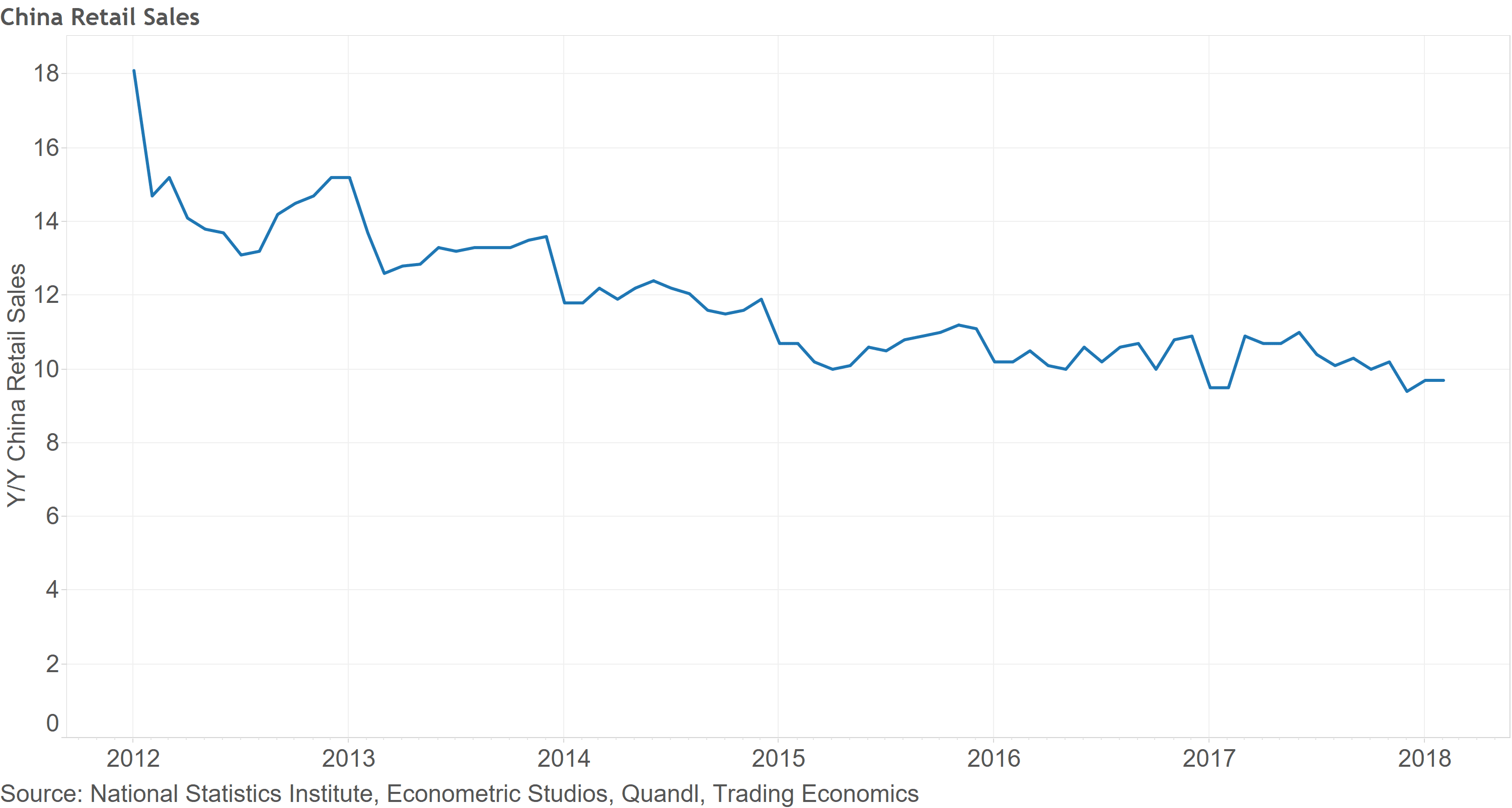 Shifting to Europe, here’s the European view of consumer spending growth rates.  Interestingly, of the five entities shown in the figure – Euro area, Germany, France, Italy, and the UK – France is on top, with a year-over-year consumer spending growth rate of 3.1 percent.  That’s a good deal higher than the 1.8 growth in the entire Euro area and the 1.5 percent in the UK, the 0.6 percent in Germany, and the deteriorating -0.5 percent in Italy.

As any economic observer already knows, Europe is important because of its size and affluence, but it will likely never be a leader in global growth rates for consumer spending again.  Or, at least not in our lifetimes. 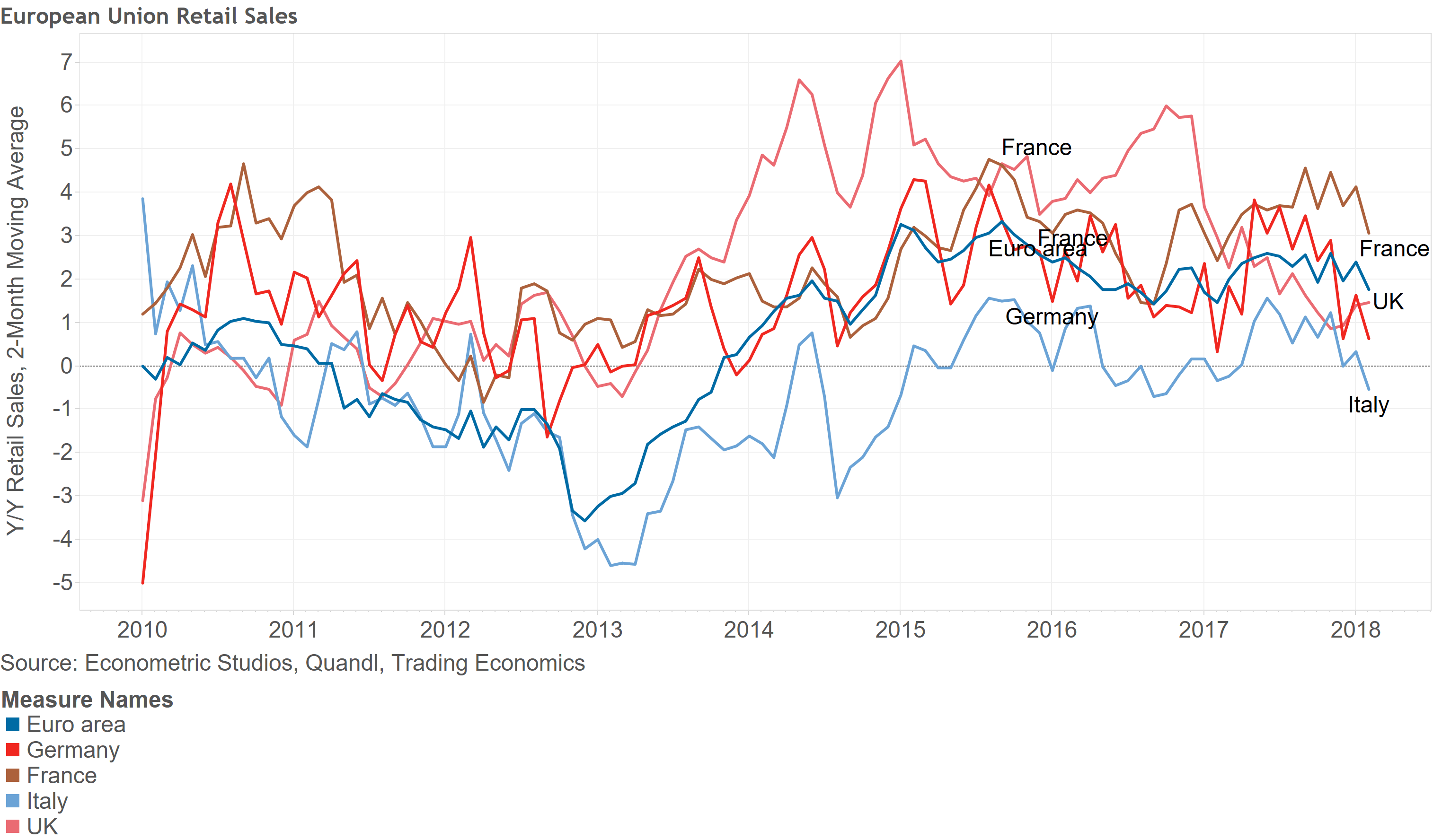 With the American, Chinese, and European consumers as the background, here’s a look at all these entities together (with a few added to capture the entire scope of consumers across the globe).  As shown, China is the growth king.  The U.S. comes in second, almost always beating consumers in European countries.  In third is France, followed by Brazil, Russia, Japan, the Euro area, the UK, Germany, and then those poor Italians.

With this view as the backdrop, it’s not hard to see why a Chinese consumer mishap could be the bleeding point into the next recession.  As a point, should Chinese consumers give the world a sneeze, and the global economy catches a cold, it would be the first time in a hundred years when the U.S. economy wasn’t the catalyst behind a global recession. 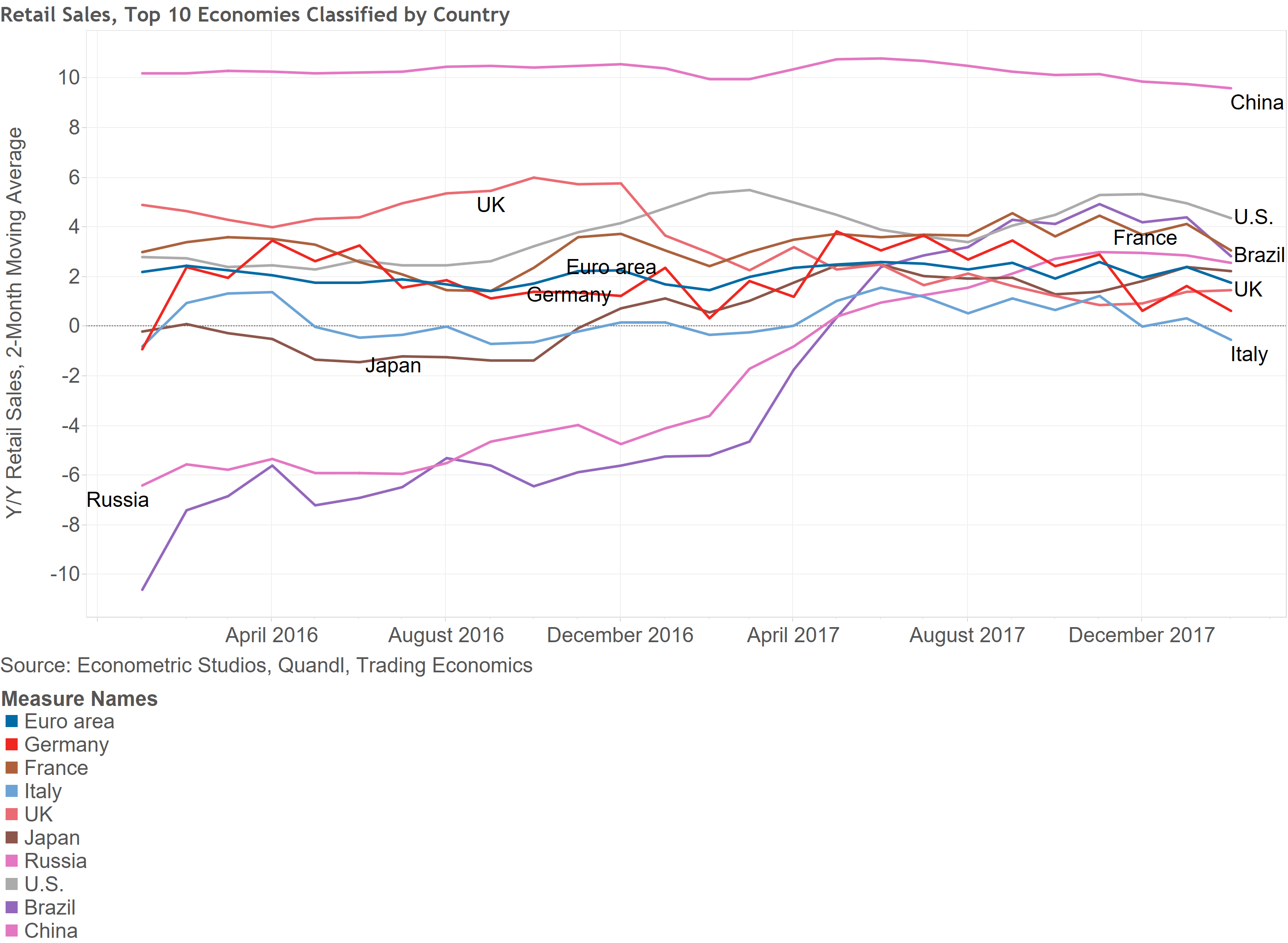 What could cause a China meltdown?  That’s a good question.  The country dealt with bank failure and housing market issues back in 2015 and came out just fine.  Perhaps the one trigger could be a trade war.  That would do it.

Overall, the global consumer is chugging along to start 2018, with the U.S. and China leading the way.  The biggest risk for the global economy is the Chinese consumer – any fluttering there could cause a global recession.