Since inception on October 17, 2005, through December 31, 2017, Wintergreen Fund, Inc.’s (the “Fund”) Investor Class had a cumulative return of 105.20%. The Fund’s Institutional Class had a cumulative return of 41.66% since its inception on December 30, 2011. For the 1-year period ended December 31, 2017, the Fund’s Investor Class returned 14.00%, and the Institutional Class returned 14.17%. The Fund had strong 2017 returns from long-term portfolio holdings Reynolds American Inc. (“Reynolds”), Compagnie Financiere Richemont SA, and British American Tobacco plc (“BAT”). As we mentioned in our 2017 Semi-Annual Report shareholder letter, BAT completed its acquisition of Reynolds during the third quarter of 2017. Securities that underperformed included Birchcliff Energy Ltd., Provident Financial plc (which was sold during the year), and Baker Hughes, Inc. (which was sold during the year). The Fund continued to utilize forward currency contracts, which had a minor negative impact on the Fund’s performance during the period.

Nothing happens in a vacuum in life: every action has a series of consequences, and sometimes it takes a long time to fully understand the consequences of our actions. - Khaled Hosseini

In our 2016 Annual Report shareholder letter, we discussed the importance of the shareholder vote at the annual meeting of shareholders of companies held in investment portfolios. Research by Wintergreen Advisers, LLC, the Fund’s investment manager, into the companies that make up the S&P 500 Index, discovered that at such companies’ annual meetings, S&P 500 index fund sponsors’ pattern of voting with respect to executive compensation plans has contributed to an increase in the costs borne by every shareholder. We refer to these costs as Look-Through Expenses, which are included in company operations expenses, but are not easily apparent or identifiable by most investors. Nevertheless, money that is spent on executive compensation plans is money that is not available for other corporate purposes, including paying dividends to shareholders. In contrast to our view about voting, one prominent index fund sponsor has stated that its “engagement” with companies is more important than its voting record. This sponsor’s presentation revealed that during the 2017 proxy season, it participated in over 18,000 company meetings globally and actively engaged with approximately 950 of those companies. Only 100 companies, a relatively small one half of one percent of the meetings held, committed to make changes in response to the sponsor’s input. According to publicly available proxy voting records, this sponsor voted 97% of the time in favor of company compensation plans during the same period. The actions of index funds simply do not match their words.

Everybody, soon or late, sits down to a banquet of consequences. - Robert Louis Stevenson 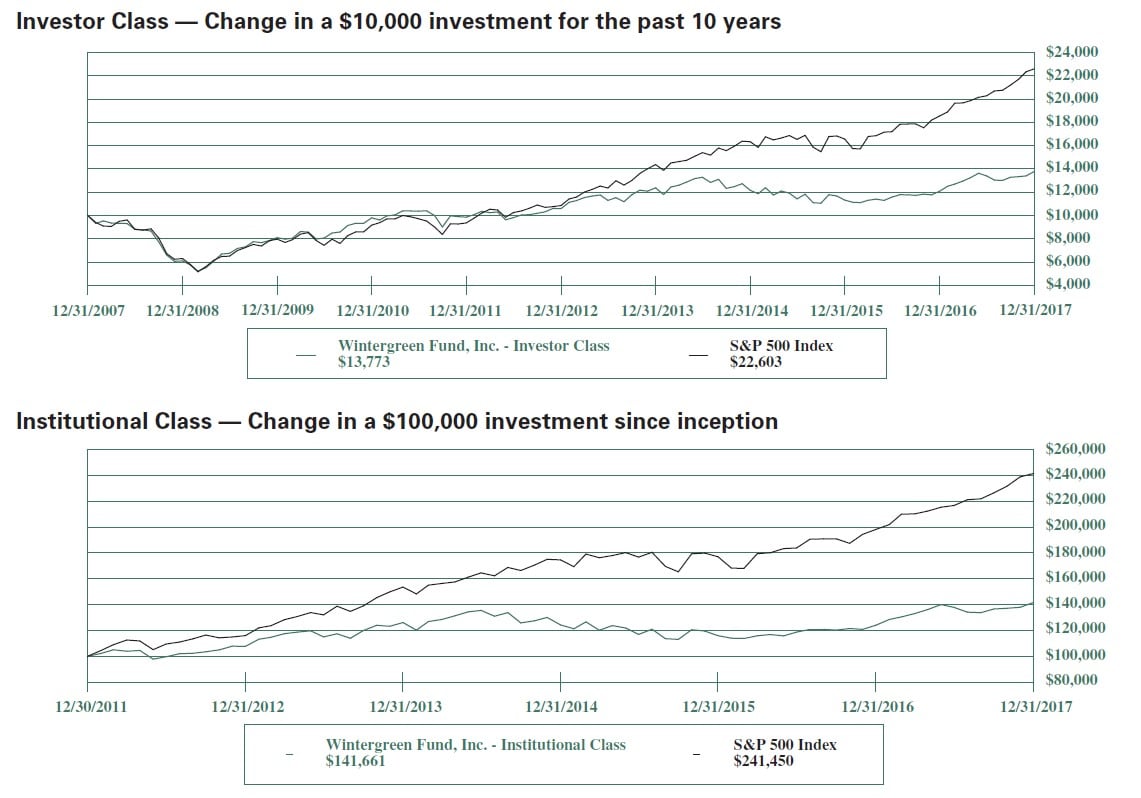 Each company in the S&P 500 Index has its own embedded compensation expenses, and Wintergreen Advisers’ research strongly suggests that S&P 500 index funds, whose significant ownership weighting is often enough to influence the result of the shareholder vote, enable significant hidden costs that investors unknowingly pay. Our research into the annual reports and proxy statements of all 500 companies that make up the S&P 500 Index revealed that investors and money managers crowding into these vehicles aren’t clearly presented with two ongoing, long-term costs which affect the funds’ total returns:

A good engineer thinks in reverse and asks himself about the stylistic consequences of the components and systems he proposes. - Helmut Jahn

Alphabet Inc.’s Internet search service has proven to be indispensable. “Google it” has become a daily command for hundreds of millions of people. Revenues have risen from $16.6 billion in 2007, when the Fund initially invested in this industry leader, to approximately $111 billion in 2017. Cash balances (inclusive of marketable securities) have followed the upward trajectory of revenues, ending at around $102 billion in 2017, compared to about $14 billion a decade earlier. Free cash flows run in the billions every year, enabling the company to branch out to other investments for the future. Company management is, in our view, focused on core operations and has instituted appropriate controls on its so-called “other bets.” Alphabet’s powerful economic model, and capable and visionary leadership, are essential ingredients for investments by the Fund for our shareholders. However, toward the end of last year, with the stock crossing quadruple digits for the first time amid seemingly indiscriminate buying by passive funds, our important third criterion – an undervalued price – no longer held. As a true active value investor, we decided to cash in on this enormously profitable 10-year investment to adhere to our sell discipline. While we believe the first two criteria will remain in place, if the shares become undervalued again, we would actively consider deploying Fund capital into the company for our shareholders.

I have the simplest tastes. I am always satisfied with the best. - Oscar Wilde

We believe that luxury is timeless and in our opinion there is no better luxury goods company than the Swiss group Compagnie Financiere Richemont (“Richemont”). Richemont boasts a portfolio of watches, jewelry, leather goods and accessories from prominent brands Cartier, Piaget, Van Cleef & Arpels, and Montblanc. With approximately 40% (and increasing) of sales in Asia-Pacific, the company is firmly rooted in a region where wealth is growing rapidly. Richemont is also experiencing strong demand in other parts of the world, which creates a steady stream of multicurrency revenues. Like many companies held by the Fund, Richemont produces substantial free cash flows for dividends and share buybacks. With a balance sheet in a large net cash position, the company has much flexibility to pursue growth initiatives such as the proposed acquisition (announced in January) of the voting shares of Yoox Net-a-Porter that Richemont does not already own. Yoox, according to Richemont, is currently the world’s leading online luxury retailer with over three million active customers. It’s important for retailers to keep up in the era of e-commerce. Richemont is no exception, and the marriage of Richemont brands with Yoox’s online capabilities makes for a formidable union.

Thank you for your continued investment in Wintergreen Fund.