The Australian conglomerate Wesfarmers is demerging its largest company within its portfolio, and from the day it was purchased it has been an example of the axiom; the price you pay for an asset determines your investment return. Which is what Warren Buffett refers to when he says’ “Price is what you pay and value is what you get.”

Heads up, the 10-Week Investment Analysis Program enrolment ends this Saturday at midnight, and places are limited to 25 investors, so hurry and secure your place now, click here. But only apply if you are committed to mastering the investment game. click here.

Wesfarmers’ chief executive Rob Scott announced a demerger of Coles from Wesfarmers’ by spinning off Coles as a listed ASX independent company.

“Therefore a demerger is a logical way of separating the businesses and giving our shareholders the opportunity to have a direct interest in Coles.” CEO Rob Scott

Wesfarmers’ will retain 20% ownership of the newly listed entity and the remaining 80% ownership will be transferred to current Wesfarmers shareholders’ via newly issued shares.

The Australian Financial Review reported that Mr. Scott said every business in Wesfarmers’ was theoretically for sale, but a demerger was the best way of separating Coles from the Wesfarmers’ business without incurring capital gains tax.

So, you will have the opportunity to buy an ownership share in Coles in the near future (6-8 months according to Mr. Scot), if you aren’t already a Wesfarmers’ shareholder, but should you?

It was reported in the Financial Review that Credit Suisse put the value of Coles at $19 billion (All amounts in Australian dollars & Source).

Amusingly, that was the same price they paid for Coles in late 2007.

The most optimistic valuation I calculated for Coles was $13 billion, but once the optimistic assumptions are removed from the equation the valuation drops like a stone.

I’m not surprised by Credit Suisse’s excessive valuation, if I wanted to handle the demerger of a company the size of Coles and earn large handsome profits, I too would butter up Wesfarmers’ Management by publicly announcing an excessively high valuation for Coles.

But, what value is Coles’ worth?

Wesfarmers’ reports Coles’ income on an EBIT basis, but it does something else you should know about.

For instance, in 2017, $811 million was the reported amount of capital expenditure spent, but that number was reduced due to movement in accruals, once the accruals were added back the amount rose significantly to $1.68 billion.As no more detail was provided in the annual report, we will update this preliminary report when new data is released. So, we have to adjust the reported capital expenditure for all 6 years.

Adding back the accruals is necessary as it isn’t necessarily a cash payment, and it would not appear in the cash flow statement, but the capital expenditures – stated as Plant, Property & Equipment – would appear as a line item under Cash Flow Investing Activities.

Once the readjustment was made for the last 6 years, it resulted in the 6-year average EBIT figure of -$803 million. All previous 6 years EBIT figures were negative.

Coles’ supermarkets before Wesfarmers purchased them in late 2007 were severely lacking in investment, the majority of stores were in bad shape. So it was expected that large capital expenditures were needed to be invested by Wesfamers’ to get Coles’ supermarkets up to standard to just compete with Woolworths.

Before we go any further consider that in late 2007, Wesfarmers paid $19.4 billion for the Coles Group.

What did it get for the $19.4 billion? Let’s do some back of the envelope calculations. 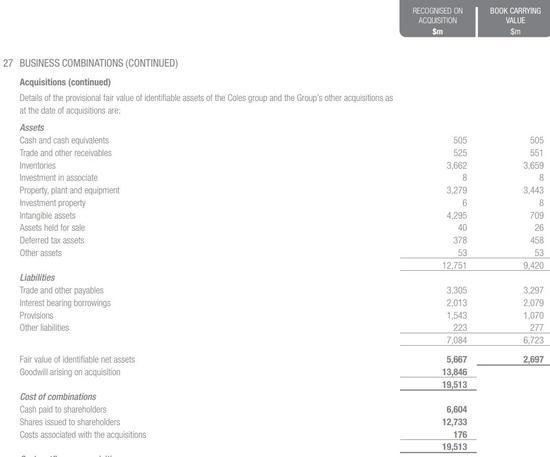 This is a snapshot of the asset and liability values of the Coles Group when Wesfamers purchased it. (Note 27, 2008, Wesfarmers Annual Report).

Reproduction Value (RV) method is similar to book value but revalues the assets to reflect their current economic value, and is reflected above in Note 27, under the column Recognised on Acquisition, which is the figure we’ll use ≈ $5.8 billion.

Before a cent was invested in the Coles Group to restructure and refurbish it, Wesfamers was only earning a 3.90% return on its initial investment.

So, without a single cent of external investment, after 10 years, the return increased by 4%.

Quite a dismal return on $19 billion considering inflation average 3%, and that’s without adding in the capital expenditure spent on restructuring and refurbishment of all supermarkets owned by Coles.

P.S. Don’t rely on reading a financial commentators latest “hack” or tactic used incorrectly – I want you to beat them at their own game. I will coach you step for step through the investment valuation process. A valuation process proven for over 60 years – Click Here.

Article by Searching For Value