If you’ve been reading some of my recent posts, you will have noted my, and the Investment Masters belief, that many of the investment theories taught in most business schools are flawed. And they can be dangerous too, the recent Financial Crisis is evidence of as much. One man who, prior to the Financial Crisis, issued a challenge to regulators including the Federal Reserve Chairman Alan Greenspan, to recognise these flaws and develop more realistic risk models was Benoit Mandelbrot.

Over the years I’ve read a lot of investment books, and the name Benoit Mandelbrot comes up from time to time. I recently finished his book ‘The (Mis)Behaviour of Markets – A Fractal View of Risk, Ruin and Reward’.

So who was Benoit Mandelbrot, why is he famous, and what can we learn from him?

Benoit Mandelbrot was a Polish-born mathematician and polymath, a Sterling Professor of Mathematical Sciences at Yale University and IBM Fellow Emeritus (Physics) who developed a new branch of mathematics known as 'Fractal' geometry.  This geometry recognises the hidden order in the seemingly disordered, the plan in the unplanned, the regular pattern in the irregularity and roughness of nature. It has been successfully applied to the natural sciences helping model weather, study river flows, analyse brainwaves and seismic tremors.

A 'fractal' is defined as a rough or fragmented shape that can be split into parts, each of which is at least a close approximation of its original-self. In nature, think of clouds, mountains, trees, ferns, river networks, broccoli, or cauliflower. Nassim Nicholas Taleb, who dedicated his best-selling book, 'Black Swan' to Mandelbrot, explains "This character of self-affinity implies that one deceptively short and simple rule of iteration can be used, whether by a computer or, more randomly, by Mother Nature, to build shapes of seemingly great complexity."

When it comes to the stock market and fractals, think of hourly, daily, weekly, monthly or yearly stock price moves. Remove the x-axis labelled 'time', and they all looks pretty much alike. 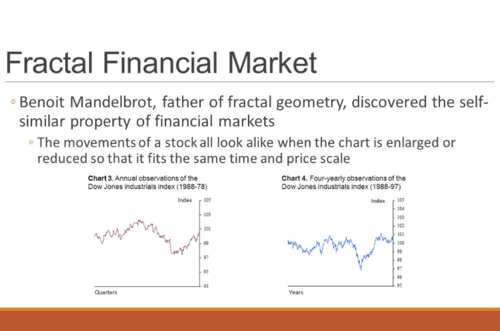 Mandelbrot found that the underlying power law that was evident in random patterns in nature also applies to the positive and negative price movements of many financial instruments. The movement of stock prices followed a power law rather than a 'Bell', 'Gaussian' curve or 'Normal Distribution'.

"In the 1960's a maverick mathematician named Benoit Mandelbrot argued the tails of the distribution might be fatter than the normal bell curve assumed; and Eugene Fama, the father of efficient-market theory who got to know Mandelbrot at the time, conducted tests on stock prices changes that confirmed Mandelbrot's assertion. If price changes had been normally distributed, jumps greater than five standard deviations should have shown up in a daily price data about once every seven thousand years. Instead, they cropped up about once every three to four years." Sebastian Mallaby, 'More Money than God.'

While Mandelbrot's theory won't help us predict where a stock or commodity price is going or help us value a company, it can help us extract an element of order from the randomness of markets. It can also help us better understand and recognise risk - a prerequisite for successful investing.

"The value of the great Benoit Mandelbrot's work lies more in telling us that there is a 'wild' type of randomness of which we will never know much (owing to their unstable properties.)" Nassim Nicholas Taleb

"A thoughtful investment approach focuses at least as much on risk as on return. But in the moment-by-moment frenzy of the markets, all the pressure is on generating returns, risk be damned." Seth Klarman

Today, the Investment Masters recognise the traditional model, a core component of business school curricula, is flawed.  It has the propensity to significantly underestimate the probability of extreme volatility, known as tail events, that can lead to the permanent loss of capital.

"Things like Gaussian curves and Value at Risk (VAR) were some of the dumbest ideas ever put forward." Charlie Munger

"The idea that you have a bell-shaped curve is false. You have outlying phenomena that you can't anticipate on the basis of previous experience." George Soros

"I think we pay more respect to the tails of the bell curve than most funds do: we tend to be at the tighter end of the spectrum." Israel Englander

"The devil is in the residuals, as all of us have discovered to our sorrow." Howard Marks

"Extreme events are where ruin is found. It's also true that these extreme changes in securities prices may be much greater than you would expect from the Gaussian or normal statistics commonly used." Ed Thorp

"I discovered along the way that the economists and social scientists were almost always applying the wrong maths to the problems, what became later the theme of the Black Swan. Their statistical tools were not just wrong, they were outrageously wrong - they still are. Their methods underestimated "tail events," those rare but consequential jumps. They were too arrogant to accept it.  This discovery allowed me to achieve financial independence in my twenties, after the crash of 1987."  Nassim Nicholas Taleb 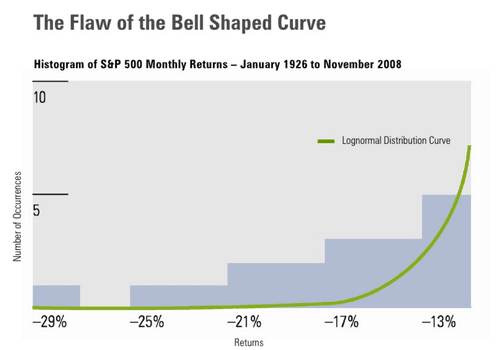 While I've long recognised the flaws in the 'bell curve' and witnessed them on an almost daily basis, I found the book a useful construct to help think about volatility and market risk. Benoit's book decimates the notion of a normal distribution of stock price changes and all of the models that rely on it: the efficient-market hypothesis, CAPM, Value at Risk [VAR] etc.

Below I've included some of my favourite quotes from the book ..

"I am not a Luther fomenting schism in the Church. I am an Erasmus who, through study, reason, and good humour, tries to talk some sense. My aim; to change the way people think, so that reform may go forward."

"My life's work has been to develop a new mathematical tool to add to man's small survival kit."

"Since my youth I have been shamelessly disrespectful of received wisdom."

"My understanding of economics comes not from abstract theory, but from observation."

"Keep it simple is the catchphrase of good models."

"Contrary to orthodoxy, price changes are very far from following the bell curve."

"Examine price records more closely, and you typically find a different kind of distribution than the bell curve. The tails do not become imperceptible but follow a 'power law.'"

"If price changes scale, the overhang can be catastrophic. Once you are riding out on the far ends of a scaling probability curve, the journey gets very rough."

"Periods of big price changes groups together, interspersed by intervals of more sedate variation - the tell tale marks of long memory and persistence. It shows scaling."

"The very heart of finance is fractal."

"The market is very risky - far more risky than if you blithely assume that prices meander around a polite Gaussian average."

"Market turbulence tends to cluster. This is no surprise to an experienced trader. They also know that is in those wildest moments - the rare but recurring crisis of the financial world - where the biggest fortunes of Wall Street are made and lost. They need no economists to tell them this. But their intuition is entirely validated by the multi-fractal model."

"That cotton prices should vary the way income does [ie. to a power law]; that income variations should look like Swedish fire insurance claims, that these, in turn, are in the same mathematical family as formulae describing the way we speak, or how earthquakes happen - this is, truly, the greatest mystery of all."

"Greater knowledge of danger permits greater safety. For centuries, shipbuilders have put care into the design of their hulls and sails. They know that, in most cases, the sea is moderate. But they also know that typhoons arise and hurricanes happen. They design not just for the 95% of sailing days when the weather is clement, but also for the other 5%, when storms blow and their skill is tested. The financiers and investors of the world are, at the moment, like mariners who heed no weather warnings. This book is such a warning."

"Why does the old order continue? Habit and convenience. The math is, at bottom is easy and can be made to look impressive, inscrutable to all but the rocket scientist Business schools around the world who keep teaching it."

"Real markets are wild. Their price fluctuations can be hair-raising - far greater and more damaging than the mild variations of orthodox finance. That means that individual stocks and currencies are riskier than normally assumed. It means that stock portfolios are being put together incorrectly; far from managing risk, they may be magnifying it. It means that some trading strategies are misguided, and options mis-priced. Anywhere the bell curve assumption enters the financial calculations, an error can come out."

"Markets are turbulent, deceptive, prone to bubbles, infested by false trends. It may well be that you cannot forecast prices. But evaluating risk is another matter entirely."

"Most financial models say little with much. They input endless data, require many parameters, take long calculation. When they fail, by losing money, they are seldom thrown away as a bad start. Rather, they are 'fixed'. They are amended, qualified, particularised, expanded and complicated. Bit by bit, from a bad seed a big but sickly tree is built, with glue, nails, screws and scaffolding. That people still lose money on these models should come as no great surprise."

"Whether guide or master, modern portfolio theory bases everything on the conventional market assumptions that prices vary mildly, independently, and smoothly from one moment to the next. If those assumptions are wrong, everything falls apart; rather than a carefully tuned profit engine, your portfolio may actually be a dangerous, careening rattletrap."

"The same false assumptions that underestimates stock-market risk, mis-price options, build bad portfolios, and generally misconstrue the financial world are also built into the standard risk software used by many of the world's banks. The method is called Value at Risk."

"Finance today is in the primitive state of natural history three centuries ago. Its concepts and tools are limited, and so it frequently confounds species."

"I am not yet finished; nor do I believe we are ever to have a perfect understanding of so complex a system as the global money machine. In economics, there can never be a "theory of everything." But I believe each attempt comes closer to a proper understanding of how markets behave."

Within Mandelbrot's book lies many truisms of the market, with one of the most recurring themes being that traditional business school financial models are quite simply, wrong. Mr Market does not play ball the way we would all like, nor does it conventionally follow the gentle line of a Gaussian Curve. Mandelbrot's genius lies in the fact that he has observed the markets over a long time, and using similar thought patterns to other Investment Masters, has been able to see what others haven't or wouldn't. What he teaches is to look beyond the obvious and the common; from chaos one can find order and from order one can find chaos. How visual complexity can be created from simple rules and that it is dangerous to blindly follow false assumptions. Mandelbrot is a genius and his learning is another gift to us all.