Wesco Aircraft (WAIR) sparked my interest after ranking value attributes for a basket of over 3,000 companies. At first it was the large debt reduction since 2014.  Then the aggressive and historical out sized insider buying over the past two months, mean reverting stock performance with a -44% 52-week price change near 52 week low.

Further, a renewed interest by patient value institutions reporting additional buying for the quarter reported 06/30/17. These and other attributes warranted a closer examination into Wesco Aircraft Holdings (WAIR).

Wesco Aircraft is one of the largest international distributor and provider of supply chain management services to the aerospace industry. The company offers aerospace products, including hardware, chemical, and electrical with over 565,000 active SKU. Founded in 1953 with 50 locations and 1.50Billion in 2016 sales.

It’s been several years of an endless string of self-made failures that destroyed large amounts of shareholder value.

The Carlyle Group acquired Wesco back in 2006 and took it public in 2011. Since the IPO it’s been a slow steady market and intrinsic value destroying decline. Recent goodwill write-offs are from poor acquisition. This helped drive selling.

The Haas Group reported 573.5 million in 2012 revenues as a global provider of chemical supply chain management solutions to the commercial aerospace, airline, military, energy, and other markets. Additionally, margins dropped from the low 20% to current high single digits.

During Q3 2017 earning call management presented slides to explain the current issues and go forward plan. But, analysts on the call were tired of excuses. Scathing comments such as

“Haas (acquisition) has been a disaster”, “has the board hired a banker and is reviewing the present value of what one can achieve today – or the value achieved today versus the present value of your operating plan that you’re developing”. Additional comment made, “how spectacular this thing went off the rails from when the company first went public, it’s remarkable.”

Management’s responded to analysts concerns with the following comments. The

Tangible measures* listed below may hint WAIR is near a market bottom.

Below are favorable summary attributes* with supporting tables 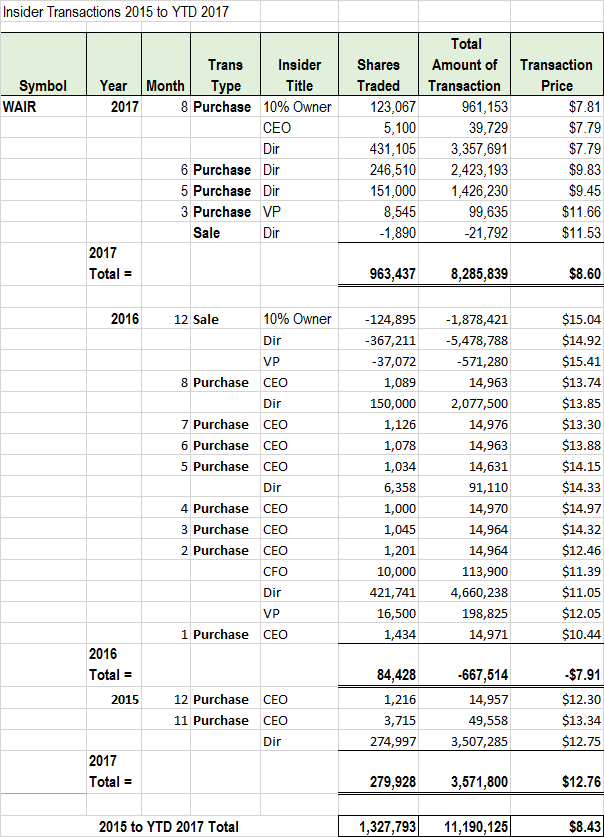 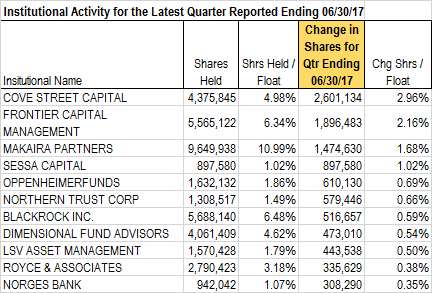 The main risk is further EBITDA decline and then the inevitable violation of loan covenants that use a EBITDA to debt ratio.

But, I believe the stock has favorable probability for a one year or less value trade or the longer holding period to realize potential larger gains with a full turn around and company sale. I initiated a place holder position looking to add shares if  the stock moves lower.

This article was originally published on ShadowStock and is reprinted here with permission.