Investors from around the globe excitedly witnessed the Dow Jones Industrial Average index break the much-anticipated 20,000 level and set a new all-time record high this week. The question now becomes, is this new threshold braking news (time to be concerned) or breaking news (time to be enthused)? The true answer is neither. While the record 20,000 achievement is a beautifully round number and is responsible for a bevy of headlines splashing around the world, the reality is this artificial 20,000 level is completely arbitrary.

Time will tell whether this random numeric value will trigger the animal spirits of dispirited investors, but given all the attention, it is likely to jolt the attention span of distracted, ill-prepared savers. Unfortunately, the median family has only saved a meager $5,000 for retirement. For some years now, I have highlighted that this is the most hated bull market (see The Most Hated Bull Market Ever), and Gallup’s 2016 survey shows record low stock ownership, which also supports my view (chart below). Trillions of dollars coming out of stock funds is additional evidence of investors’ sour mood (see fund outflow data). 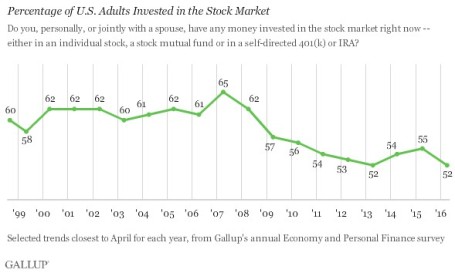 While investors have been selling stocks for years, record corporate profits, trillions in share buybacks, and trillions of mergers and acquisitions (in the face of a weak IPO market) have continually grinded stock prices to new record highs.

The maligned press (deservedly so in many instances) has been quick to highlight a perpetual list of dread du jour. The daily panic-related topics do however actually change. Some days it’s geopolitical concerns in the Middle East, Russia, South China Sea, North Korea, and Iran and other days there are economic cries of demise in China, Brazil, Venezuela, or collapse in the Euro. And even when the economy is doing fine (unemployment rate chopped in half from 10%, near full employment), the media and talking heads often supply plenty of airtime to impending spikes of crippling inflation or Fed-induced string of choking interest rate increases.

I fondly look back on my articles from 2009, and 2010 when I profiled schlocks like Peter Schiff (see Emperor Schiff Has No Clothes) who recklessly peddled catastrophe to the masses. I guess Schiff didn’t do so well when he called for the NASDAQ to collapse to 500 (5,660 today) and the Dow to reach 2,000 (20,000 today).

Or how about the great forecaster John Mauldin who also piled onto death and destruction near the bottom in 2009 (see The Man Who Cries Wolf ). Here’s what Mauldin had to say:

“All in all, the next few years are going to be a very difficult environment for corporate earnings. To think we are headed back to the halcyon years of 2004-06 is not very realistic. And if you expect a major bull market to develop in this climate, you are not paying attention.” … “We are going to pay for that with a likely dip back into a recession.”

“This rally has all the earmarks of a major short squeeze…When the short squeeze is over, the buying will stop and the market will drop. Remember, it takes buying and lot of it to move a market up but only a lack of buying to create a bear market.”

Nouriel Roubini a.k.a. “Dr Doom” was another talking head who plastered the airwaves with negativity after the 2008-2009 financial crisis that I also profiled (see Pinning Down Roubini). For example, in early 2009, here’s what Roubini said:

“We are still only in the early stages of this crisis. My predictions for the coming year, unfortunately, are even more dire: The bubbles, and there were many, have only begun to burst.”

For long-term investors, they understand the never-ending doom and gloom headlines are meaningless noise. Legendary investor Peter Lynch pointed on on numerous occasions:

While the eternally, half-glass full media is quick to highlight the negatives, it’s interesting that it takes an irrelevant, arbitrary level to finally create a positive headline for a new all-time record high of Dow 20,000. Frustratingly, the new all-time record highs reached by the Dow in 2013, 2014, 2015, and 2016 were almost completely ignored (see chart below):

What happens next? Nobody knows for certain. What is certain however is that following the breaking news headlines of Dow 20,000 to make critical investment decisions is not an intelligent long-term strategy. If you, like many investors, have difficulty in sticking to a long-term strategy, then find a trusted professional to help you create a systematic, disciplined investment strategy. Now, that is some real breaking news.