The headlines haven’t been very rosy over the last week, but when is that ever not the case? Simply put, gloom and doom sells. The Chinese stock market is collapsing; the Yuan is plummeting; there are rising tensions in the Middle East; terrorism is rising to the fore; and commodity prices are falling apart at the seams. This is only a partial snapshot of course, and does not paint a complete or accurate picture. Near record-low interest rates; record corporate profits (outside of energy); record-low oil prices; unprecedented accommodative central bank policies; and attractive valuations are but a few of the positive, countervailing factors that rarely surface through the media outlets.

At the end of the day, smart long-term investors understand investing in financial markets is a lot like grocery store shopping. Similarly to stocks and bonds, prices at the supermarket fluctuate daily. Whether you’re comparing beef (bonds) and chicken (stocks) prices in the meat department (stock market), or apple (real estate) and orange (commodities) prices in the produce department (global financial markets), ultimately, shrewd shoppers eventually migrate towards purchasing the best values. Since the onset of the 2008-2009 financial crisis, risk aversion has dominated over value-based prudence as evidenced by investors flocking towards the perceived safety of cash, Treasury bonds, and other fixed income securities that are expensively priced near record high prices. As you can see from the chart below, investors poured $1.2 trillion into bonds and effectively $0 into stocks. Consumers may still be eating lots of steaks (bonds) currently priced at $6.08/lb while chicken (stocks) is at $1.48/lb (see U.S. Department of Labor Data – Nov. 2015), but at some point, risk aversion will abate, and consumers will adjust their preferences towards the bargain product. 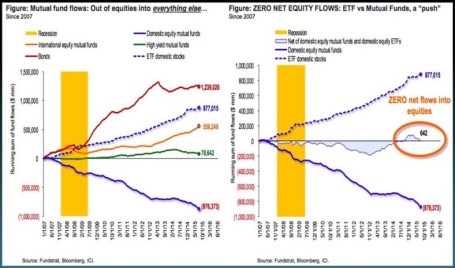 While the general public may have missed the massive bull market in stocks, astute corporate executives and investment managers took advantage of the equity bargains in recent years, as seen by stock prices tripling from the March 2009 lows. As corporate profits and margins have marched to record levels, CEOs/CFOs put their money where their mouths are by investing trillions of dollars into share buybacks and mergers & acquisitions transactions.

Despite the advance in the multi-year bull market, with the recent sell-off in the market, panic has dominated rational thinking. Once again, the rare occurrence (a few times over the last century) the dividend yield of stocks once again exceeds the yield on Treasury bonds (2.2% S&P 500 vs 2.1% 10-Year Treasury). But if we are once again comparing beef vs. chicken prices (bonds vs stocks), the 6% earnings yield on stocks (i.e., Inverse P/E ratio or E/P) now looks even more compelling relative to the 2% yield on bonds. For example, the iShares Core U.S. Aggregate Bond ETF (AGG) is currently yielding a meager 2.3%.

For a general overview, Scott Grannis at Calafia Beach Pundit summarizes the grocery store flyer of investment options below: 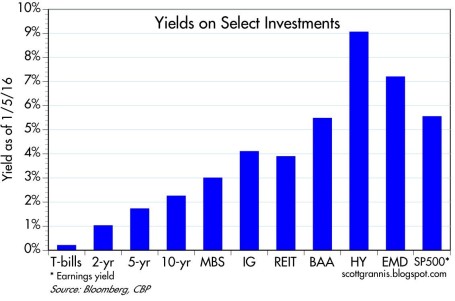 While these yield relationships can and will certainly change under various economic scenarios, there are no concrete signs of an impending recession. The recent employment data of 292,000 new jobs added during December (above the 200,000 estimate) is verification that the economy is not falling off a cliff into recession (see chart below). As I’ve written in the past, the positively-sloped yield curve also bolsters the case for an expansionary economy. 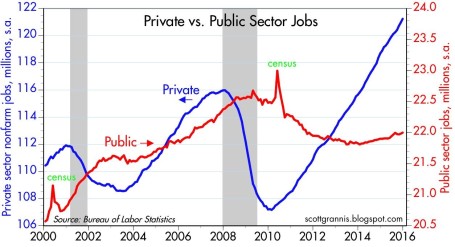 While it’s true the Chinese economy is slowing, its rate is still growing at multiples of the U.S. economy. As a communist country liberalizes currency and stock market capital controls (i.e., adds/removes circuit breakers), and also attempts to migrate the economy from export-driven growth to consumer-driven expansion, periodic bumps and bruises should surprise nobody. With that said, China’s economy is slowly moving in the right direction and the government will continue to implement policies and programs to stimulate growth (see China Leaders Flag More Stimulus).

As we have recently experienced another China-driven correction in the stock market, and the U.S. economic expansion matures, equity investors must realize volatility is the price of admission for earning higher long-term returns. However, rather than panicking from fear-driven headlines, it’s times like these that should remind you to sharpen your shopping list pencil. You want to prudently allocate your investment dollars when deciding whether now’s the time to buy chicken (6% yield) or beef (2% yield).