If you ask the average investor what are the most important traits of a successful investor, they would most likely say raw intelligence and hard work. In my experience, most people equate hard work with success. Unfortunately, in the world of investing the person that works hardest isn’t always more successful. Similarly, Buffett is famous for saying you don’t need a high IQ to be a great investor. Don’t get me wrong, being smart and hard working are definitely necessary for success but are not sufficient. Based on my interactions with a number of value investors, I think the most important trait that determines success is being able to focus on the long-term despite what is going on in the broader market. Obviously this personal trait has more to do with your mental preparedness than either intelligence or work ethic.

If being long-term oriented is required for success, then logically the biggest mistake that most investors make is not focusing on the long-term, when things go wrong in the short-term. Buffett has stated on multiple occasions that you should be prepared to hold a stock for at least 10 years. Personally, I think the longer the timeframe you incorporate into your investment process the better your results. I know what you’re thinking. How can I possibly think a decade ahead when I can’t even predict what will happen tomorrow? I’ll concede that for most investors thinking 3-5 years ahead is more realistic. Regardless, by framing your investment decisions in terms of years rather than days or months, you’ve already mentally taken the first steps towards becoming a better investor.

From my personal experience when investing in undervalued equities, it takes at maximum about 3 years for your investment thesis to play out. If the stock is still languishing after a 3 year period, it’s likely your original investment thesis was wrong. Thus, I think having a 3-5 year outlooks is perfectly adequate for improving your investment results.

You need to always stay focused on why you originally invested in a stock. Time and time again, I see articles in the Indian media that recommend closing out positions by using a stop loss. If you’re a fundamentally based value investor, this is a mistake. If the underlying business fundamentals haven’t changed you shouldn’t be exiting. In fact, you should be looking to add to your position as prices decline. It’s obviously easier said than done. I still get impacted every time I open up my brokerage account online and see a position losing money. But over time it becomes easier to focus on the long-term and ignore the day to day movements in share prices.

The biggest investing mistakes committed by novice investors are usually related to quarterly earnings updates. A poor quarterly result can convert a normally logical long-term oriented investor into a day trader almost instantaneously. Yes, quarterly updates do matter in terms of assessing the fundamental drivers of the business. But it’s important not to get swayed by whether the company hit or missed analyst’s earnings estimates. Earnings management has become something of an art form as practiced by US management teams. Every quarter Wall Street analysts calculate EPS down to the 4th decimal point and management teams are expected to hit that number. If the company misses expectations by even a few cents, the downside reaction can be excessively ugly. Although you don’t see the same sensitivity in Indian shares, a similar pattern definitely exists.

When I worked as an equity analyst at a global investment management firm, I was responsible for covering the Tech sector. As a result, one great example of an unwarranted overreaction to a quarterly earnings announcement that I remember vividly was Google’s Q2 2008 earnings call. On July 17 2008, Google reported Q2 2008 (quarter ending June 30, 2008) earnings that were just 2% short of analyst’s expectations. The shares ended up losing 12% in a day. It was the single biggest one day loss since the company went public in 2004. I’ve highlighted in red the steep decline. Obviously this was also around the same time that the US market was going through the great financial crisis but the Lehman bankruptcy wouldn’t occur until September, 2008. If you had sold out during the Q2 results, you would have looked pretty smart. The shares were actually down 55.5% over the course of 2008. But that’s only the first part of the story.

Before I share with you the longer-term share price chart, let’s look at Google’s Q2 2008 results in a little more depth. In the earnings press release, Eric Schmidt (Google’s CEO) said the following: “strong international growth as well as sustained traffic increases on Google’s web properties propelled us to another strong quarter, despite a more challenging economic environment.” The chart below shows that the company reported revenue of USD 5,367 mn, which was up 39% y-o-y and 3% above Q1 2008 revenue. So far so good. 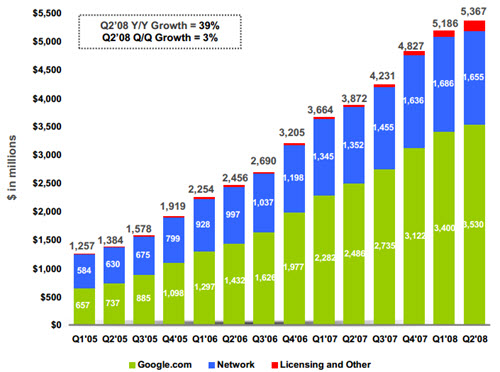 Reported net income was USD 1,247 mn and operating margins were a healthy 29%.

If you prefer to look at FCF (free cash flow) instead of accounting based earnings, the results were still excellent. In Q2 2008, Google reported FCF of USD $1,069 mn in the quarter alone. The vast majority of capex was related to It infrastructure investments, including data centers, servers and networking equipment. In addition, the company had USD 12.7 bn in cash on its balance sheet at the end of the quarter and no debt. 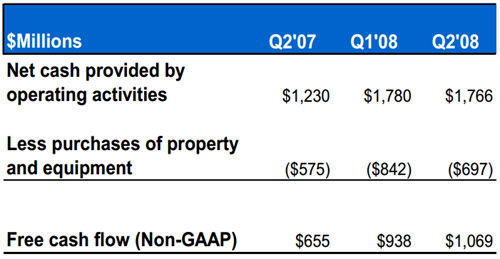 Essentially, Google reported healthy quarterly financial results in the middle of one of the worst recessions in American history and investors didn’t care. In fact, the shares were sold-off in dramatic fashion because of a 2% earnings miss. I’ll now share with you the longer-term price chart. If you remember, the overall US stock market ended up bottoming in March 2009. Google actually bottomed ahead of the broader market in November, 2008. My point in bringing this up is to highlight that if you had held onto your shares, you would be up 71% from December 31, 2007.If you actually had the courage to buy shares at the bottom, you would be up 250% from December 31, 2008. Overreactions in the short-term are detrimental to your returns in the long-term.

If I could drum just one thing into your head as an investor, it’s to always take the long view. Most investors defeat themselves before they even read the first page of annual report on a potential investment or do any analysis.

One of my favorite quotes from Sun Tzu’s The Art of War is the following:

Winning in the world of investing begins with having a long-term outlook. All the analysis and research won’t mean much if you start getting whipsawed by market sentiment. The key to victory in investing as with war is to first defeat the enemy within.

If you subscribe to my e-mail list, you’ll know that my biggest investing mistake since launching the Value Investing India Report was selling Thomas Cook too early. It just shows you that focusing on the long-term needs to be reinforced continuously.

Interestingly, Prem Watsa the Canadian billionaire who acquired a majority stake in Thomas Cook recently made headlines when discussing the upcoming elections in India. He had the following to say:

Sage advice from a man who left India with $8 in his pocket and now commands a net worth of $2 billion. The election hype is now only warming up and expect a full blown media assault from the likes of moneycontrol and CNBC on how to play the market ahead of the elections. My advice is the same as Mr. Watsa’s. Ignore the hyperbole. Focus on finding sound businesses and hold on for the long-term.

I’m also happy to announce that we’ve listened to your feedback and you can now pay for our retail subscription in Indian Rupees. We now have a simple and straightforward quarterly pricing model. You can access our premium stock recommendations for only INR 3,875 per quarter. You don’t need to worry about exchange rate movements anymore, when signing up for a subscription. You’ll also get 60 days to decide if the service is right for you. If you’re not happy, you can get a full refund. To get started click on the link below.

Japan Catalyst to transform Monex to an asset management model