ValueWalk
Home Value Investing Should You pass on Companies Going Through Major Problems?

Buy on the cannons, sell on the trumpets.

A lot of investors seem to be making the same big mistake.

Have you ever heard the saying, “Buy on the cannons, sell on the trumpets“?

I was reading a topic thread on Facebook the other week when one of the commenters mentioned an online dating website that he was looking at investing in. He was impressed with the company’s solid earnings growth over the last few years, so decided to take a closer look.

When he peered into the latest results, his initial enthusiasm dissipated. Instead of seeing an increase in revenue, as he was expecting, he saw a sizable drop. What he thought was a strong, stable growing company turned out to be a company that had just run into a major problem.

Do you pass on companies going through major problems?

A lot of investors do, preferring to find strong, stable, growing companies that will continue to grow into the future.

But, as those who requested free net net stock ideas have already realized, companies that are facing major problems can bring major profits.

In other words, whether you profit from a stock depends largely on what happens to the company going forward rather than what’s currently happening to the company.

That should help you put a company’s problems into perspective.

Instead of writing off a firm because it is suffering a large problem you really have to get a sense of where the company will be in a year or two.

That means understanding the current problem, the implications of the problem it’s facing, and what level of profitability the firm can enjoy once it’s free of the problem. Of course, if you’re a net net stock investor – (as you should be!) – then you don’t even have to assess the firm’s future profit potential.

This is part of our primal wiring.

When you’re clicking through Google Finance and spot a company that’s just been hammered by a large business problem, something deep within our ancient reptilian brain is triggered, causing you to panic, cover our wallets, close the browser window, turn off the computer, and hide under the towels in the closet.

We don’t see the opportunities that large business problems create.

A Crisis is a Terrible Thing to Waste

Typically, the stock prices of all businesses that suffer large business problems get pummeled.

As investors leave, they dump the stock in droves, sending the shares sharply downward. This can create a spectacularly cheap company in relation to net current asset value or in relation to what the company could earn under normal business conditions.

This is where a lot of money is made.

Soon after, Buffett started loading up on shares. When the scandal passed, Buffett’s holdings had appreciated handsomely.

There are numerous modern examples of crises working out very well for investors who had the stomach to buy at the point of peak pessimism.

Do you remember the BP oil spill?

Investors rushed to the exits as soon as they realized that there was a large problem.

Investors who had the courage to buy at a 50% discount to the previous high saw their shares increase to $44USD by year-end, a rise of 63%. Even if you were unlucky enough to buy before or after the point of peak pessimism, for example at a price of $35, then you still have a sizable 26% return. 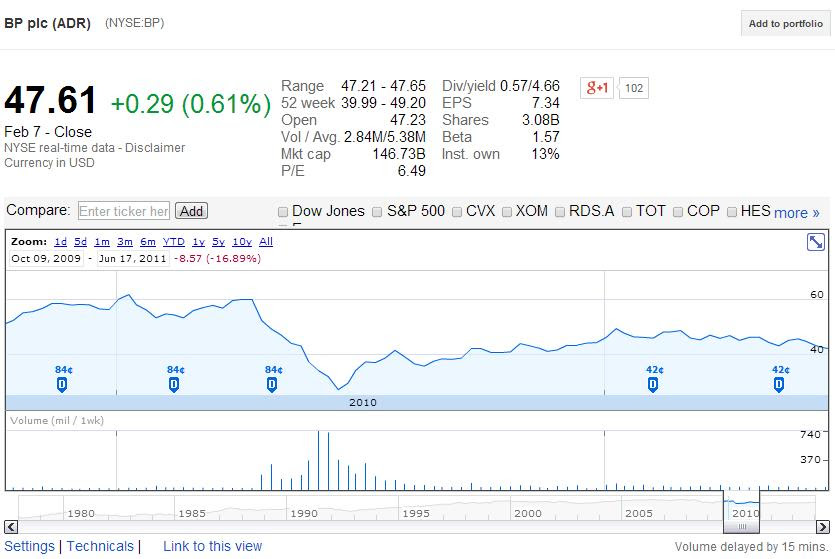 Best Buy’s (BBY) earnings got crushed in 2012 and so did the stock.

The company’s stock price slid all the way down to $11.30 at the end of the year from a high of $27.50 in March. Investors who bought in during early January would have doubled their money only a few months later.

The firm, operating in the CD and DVD segment, suffered a large drop in demand when digital downloading became the norm. Its stock sank 96% from 2005 to the beginning of 2009.

I bought two years after the stock bottomed, at a price of $1.50, then sold once the stock reached NCAV. That was enough for nearly a 100% gain in under a year. 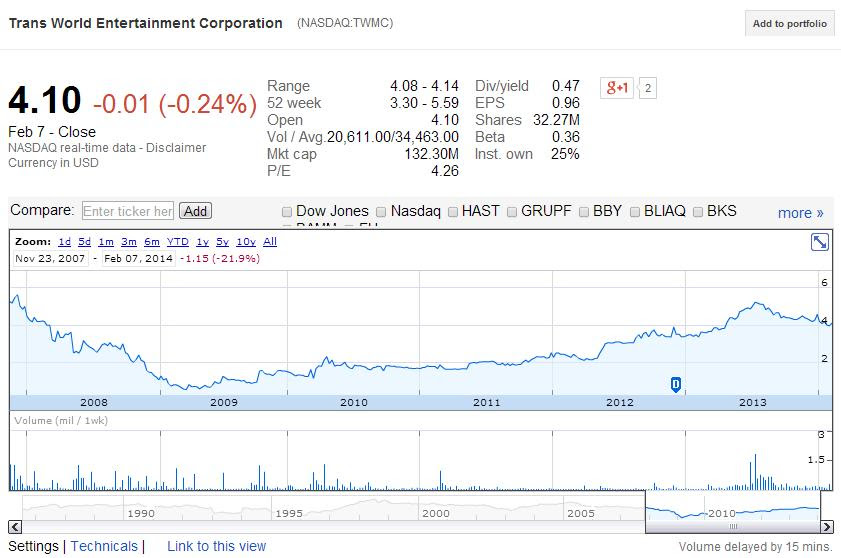 GTSI Corp was caught doing something shady associated with bidding on US government contracts.

As a result, the firm was barred from bidding on Small Business Association contracts for 2 years. Since this was the company’s main focus, both sales and earnings were devastated and the CEO was fired. The stock tumbled into the $3 range where I picked it up.

This is an obvious point, yet the stock was still hit hard. I suspect this is because the market for stocks of tiny firms is far less efficient.

A few months after I purchased the stock, GTSI Corp was purchased by Unicom Systems for $7.75 per share and I netted an 85% gain. 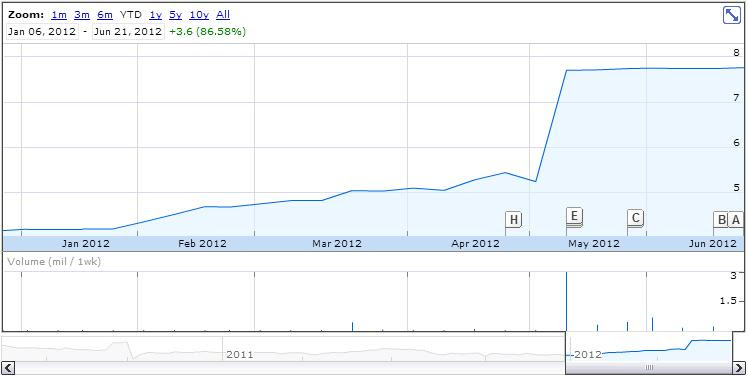 Sangoma Tech was one of our free net net stock ideas.

Its legacy telephone landline business had been hit hard as digital communication started to take over in its industry. The company’s share price sank from $0.99 in 2010 to $0.18 in November of 2013. Investors who requested free net net stock ideas had a chance to buy Sangoma for that price and I myself purchased the stock at $0.20 per share.

To right the problem, the company started investing heavily in digital telephone technology and VOIP solutions. At the time of writing, the stock trades at $0.28, enough for a 55% increase in just two months. If the company is able to regain even half of its former profitability then the stock should rise much higher.

You Have to Spot the Fixable Problems

With most stocks you have to figure out whether the company’s problem is fixable.

Net net stocks like Trans World Entertainment, GTSI Corp, or Sangoma Tech are a different breed, however. Net net stocks have problems almost by definition, but a NCAV company doesn’t have to fix the problems it’s facing for net net stock investors to collect large returns.

For most companies facing large business problems, though, you have to be able to tell which problems are fixable and which will sink the company’s earning capacity. If the firm is facing an unsolvable problem then there might not be any coming back.

The Thought Process You Should Be Using

You should try to get a thorough picture of the company.

For the business problem itself, I like to find out what exactly went wrong and how it is affecting the business.

If litigation is involved, I want to know how much the company is being sued for and whether it would be able to shoulder any debt it would have to take on.

If you’re unable to make an accurate assumption of the business implications, just pass on the investment. There are a lot of other companies out there suffering problems.

If, on the other hand, you know that the firm’s problem is solvable, won’t sink the company, and won’t cause much long term damage to the firm’s intrinsic value then you can make a lot of money by buying while everyone else is running from the stock.

You don’t even have to buy at the bottom – just demand a large discount to your estimate of intrinsic value and the returns should take care of themselves.

As far as net net stocks go, so long as you’re basing your purchases on a sizable discount to net current asset value and some solid selection criteria then the odds are overwhelmingly stacked in your favor.

Embrace Crisis and Your Portfolio Will Soar

It’s a mistake for investors to run away from companies that are facing serious problems – but that doesn’t stop them from doing it.

You can take advantage of this if you’re able to assess the situation and take the appropriate action.

Of course, if you really want to earn the big bucks then investing in net net stocks – stocks that have been drastically discounted relative to net current asset value – can net you even larger returns with more certainty and less work.

This post was first published at old school value.
You can read the original blog post here Buy When You See Blood in the Streets.