ValueWalk
Home Value Investing PE Ratios around the globe: Create your Own HeatMap

Note that the countries with the lowest PE ratios (in yellow and orange) are also among the world’s riskiest (a large swath of Africa, Venezuela (Latin America) and Eastern Europe). Put differently, these countries look cheap, but they have good reasons to be cheap. The bulk of developed markets have PE ratios between 10 and 15, with the weighted PE ratio at 10.49 for Germany, 12.81 for Japan and 14.27 for the US. Surprisingly, Mexico and Chile have the highest weighted PE ratios, with Mexico at 18.04 and Chile at 18.64. There are also large sections of the world where PE ratios cannot be computed, either because earnings information is not available or because earnings are negative.
If most of the low PE countries are high risk and the bulk of the high PE countries are low risk, we have to use more finesse in looking for cheap and expensive markets. In fact, a cheap market would offer a combination of a low PE and low risk and an expensive market would be one with high PE and high risk. To look for those mismatches, I combined the PE ratio dataset with theequity risk premiums estimated in the prior blog post and generated a list of the ten countries with the highest and lowest PE ratios, with accompanying equity risk premiums. 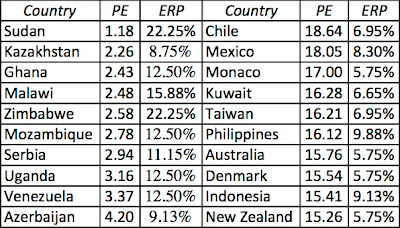 Of the ten countries with the lowest PE ratios, only two (Kazakhstan and Azerbaijan) had equity risk premiums less than 10% and I cam not tempted to invest in either country (given their dependence on commodity prices and political risk profiles). There are more interesting countries on the highest PE list, though a couple reflect commodity price volatility; the drop in copper prices, for instance, has hit Chilean company earnings harder than it has market capitalizations.

At the end of the comparisons of equity and enterprise value multiples, I must confess that I feel little inclination to make abrupt asset allocation judgments based upon any of these multiples. It is true that some markets seem to offer better risk and return trade offs than others, but these markets seem to come with warning labels (about political or commodity price risk). It is also possible that I am missing some hidden patterns here and you are welcome to download the dataset containing my estimates of both average and aggregate values, by country.