Country Risk Premiums: Investors have a mixed relationship with risk, forgetting that it exists in the good times and obsessing about in bad times, and nowhere is this dysfunction more visible than in emerging markets. After a few years where investors seemed convinced that emerging markets were no riskier than developed markets, they seem to have woken up to the existence of risk in emerging markets, with a vengeance, in the last few months. As emerging markets around the world have been pummeled, analysts have sought to assign blame. Some have pointed the finger at the Federal Reserve, claiming that mixed signals on quantitative easing and the steep rise in US interest rates have caused currency and market fluctuations globally. Others attribute dropping stock prices to slowing economic growth in the largest emerging markets, with China at the top of the list. There are a few who point to the rise of country-specific political factors, with governments in Brazil and Egypt facing pressure from their populace.

If you accept this proposition, it follows that you cannot value or invest in companies with emerging market risk exposures without having estimates of risk premiums by country. At the start of each year, for the last two decades, I have put up my estimates of risk premiums, by country, on my website. For the last three years, in response to the rapid intra-year shifts in country risk, I have also done mid-year updates. After the turmoil of the last few weeks, I decided that this would be a good time for a mid-year country risk update.
I. Default Risk Measures
Despite 60% Loss On Shorts, Yarra Square Up 20% In 2020

The most easily accessible data on country risk takes the form of sovereign default risk measures. While ratings agencies have been assigning ratings to sovereign bonds issued by countries for decades, the growth of the credit default swap (CDS) markets have given us access to CDS spreads for a subset of these countries.
a. Sovereign Ratings & Default Spreads
Ratings agencies have been critiqued since the banking crisis of 2008 for being being biased (in favor of issuers) and overlooking major risks, but I think the bigger problem with them is that they are slow in reacting to change. That effectively makes sovereign ratings into lagging indicators of country risk.
The slow process of ratings change can be seen by looking at the changes in sovereign ratings between January and June 2013. In the attached spreadsheet, I have the local currency sovereign ratings from Moody’s for 118 countries (You can also get the sovereign ratings directly fromMoody’s and Standard & Poor’s). During this turbulent six-month period for emerging markets, there were only 15 countries that saw ratings changes, with 10 downgrades and 5 upgrades, and they are listed below: 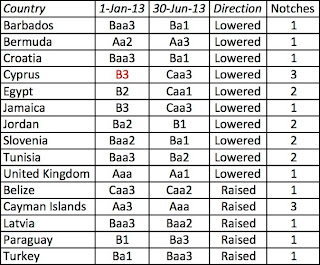