ValueWalk
Home Business Homebuyer Demand Climbs In Q1, Although London Is Still Off The Pace

Estate agent comparison site, GetAgent.co.uk, has released its latest Homebuyer Demand Hotspots Index of the year, revealing how the market has performed across the UK’s major cities during the first quarter of 2020.

GetAgent’s Hotspots Index is a quarterly look at homebuyer demand levels in each major UK city. The index is based on the number of properties that are already marked as sold subject to contract or under offer as a percentage of all homes listed across the major property portals. For example, if 100 homes are listed and 50 are already taken by prospective buyers, the area would sit at a 50% demand score.

The latest index shows that the market hasn’t paused for breath since the Christmas break, with homebuyer demand at 60% during the first quarter of 2020, up +6% since the final quarter of last year.

The biggest uplift in buyer interest has been in Bournemouth, where demand has climbed by +20% in the first quarter alone.

In terms of the highest levels of homebuyer activity, Bristol ranks top with 76% of all homes listed already under offer or sold subject to contact. Glasgow (74%), Sheffield (73%), Leeds and Plymouth (71%) are also particularly hot.

However, with the ongoing uncertainty caused by Covid, London homebuyers remain more cautious. Overall, buyer demand in the capital sits at just 46% having crept up +3% since the final quarter of last year.

The good news is that just two boroughs, Newham and Brent, have seen demand remain static, while every other London borough has at least enjoyed some positive movement in homebuyer activity.

Bexley has seen the largest quarterly uplift at +14% and is home to the largest level of current buyer demand (74%). Havering, Hounslow, Hillingdon and the City of London have seen the next largest uplift since Q4 of last year at +5%.

However, along with Westminster (15%) and Kensington and Chelsea (19%), the City of London ranks as one of the coldest spots in the capital for current homebuyer demand with just 27% of all homes listed selling in current market conditions.

“There’s been no let-up for a UK property market fuelled by the stamp duty holiday with a further increase in homebuyer demand during the first quarter of this year.

The approaching deadline no doubt dampened this demand to a degree and with an extension now in place, we expect to see further increases over the next two quarters of this year at the very least.

Covid has caused the large degree of regional variation found within the UK property market to come even more pronounced for a whole host of reasons.

While Bournemouth remains one of the coldest spots for current demand, it’s great to see that as we ease towards the end of lockdown, demand is starting to lift at the quickest rate of all UK cities.

London is also yet to bounce back to its former glory, although the good news is that demand is building across almost every borough.

It will be interesting to see just how long it takes for normality to fully return now that an exit plan is in place.” 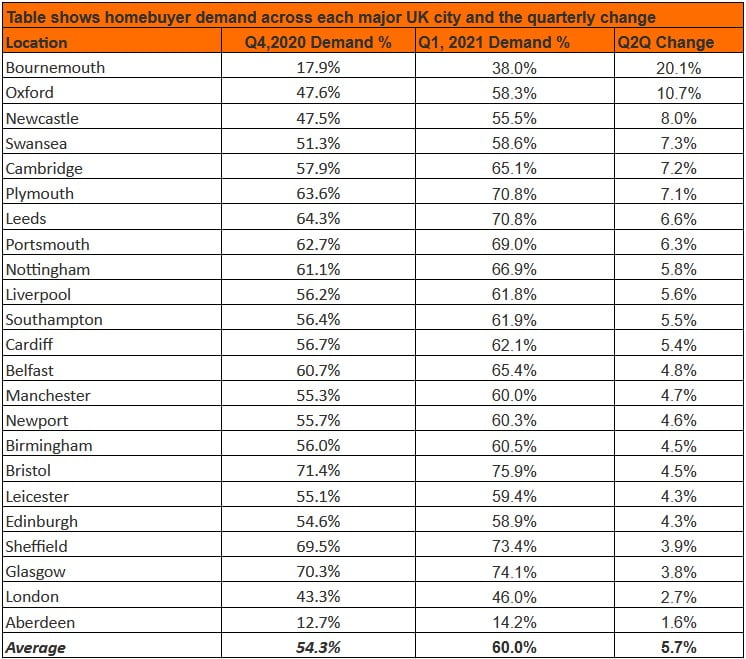 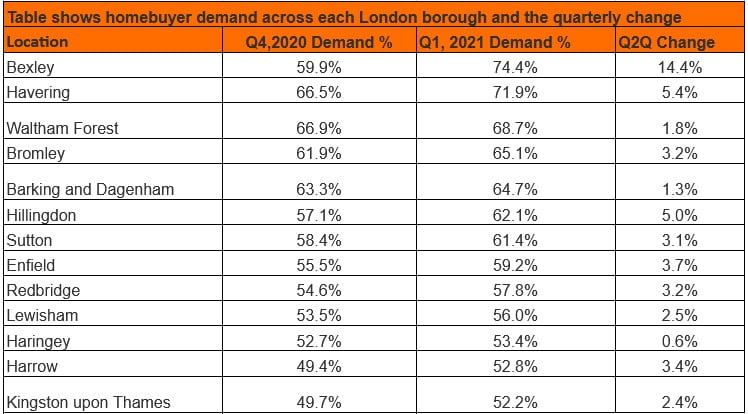