In his Weekend Reading Notes to investors, while commenting on the 10-year Treasury note yields, Louis Navellier wrote: 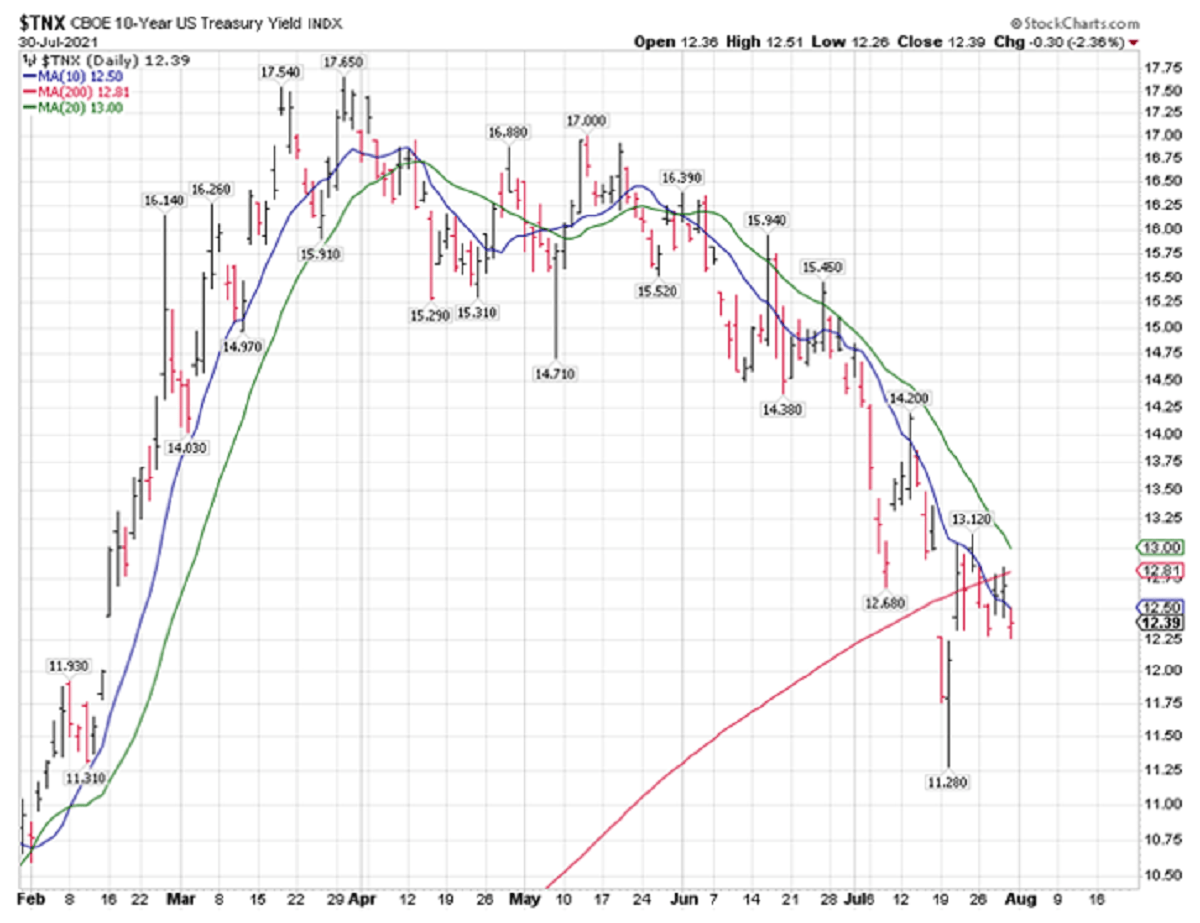 A rising 200-day moving average should be providing support for Treasury yields in a normal economic scenario. In this case, it is doing the opposite; it is providing resistance as this bond trading happens under the 200-day moving average. The bond market looks like it is afraid of the delta mutation of the novel coronavirus, and it also is probably benefiting from Japanese and European QE money, which can find no yields in their home bond markets to chase, so they are looking at positive yields in the U.S. bond market.

If we start to trade under 1.20% this week, I think all kinds of value indexes and sectors will get hit as stock market participants at this stage in the recovery would like to see an uptick in Treasury yields so that they can feel reassured that the deflationary impact of the pandemic might be avoided. 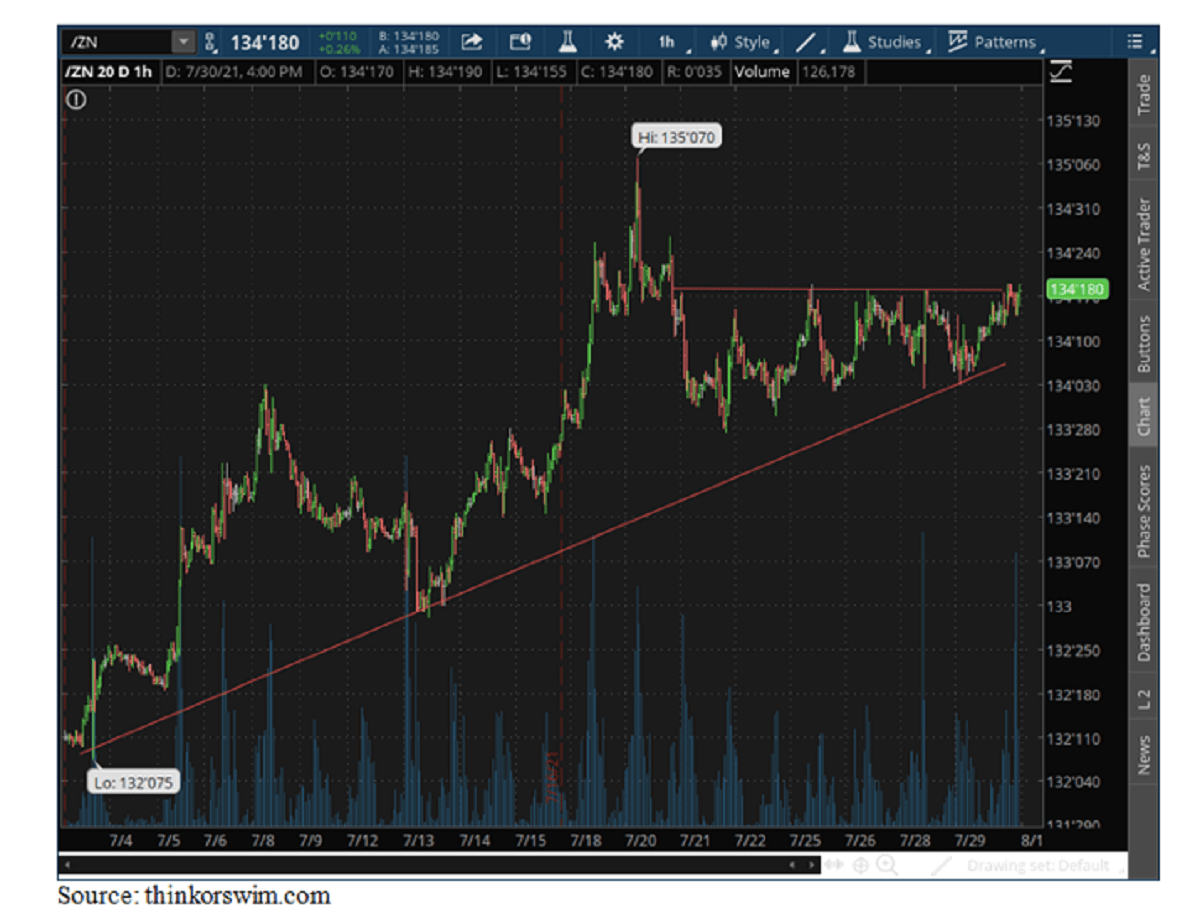 The chart above tracks the front-month 10-year Treasury note futures. Every dip is being aggressively bought, and it would appear likely – based on this pattern – that we are headed for a retest of the 135’07 high from earlier in July, which represents a yield of 1.128%. (Treasury note futures were never decimalized; they still trade in 32’s, where the smallest tick is 1/64, so the recent high on the front month T-note futures is 135 7/32’s, to be exact.) Treasury futures are the most institutional of markets. They are liquid and deep, so we are seeing big money pushing yields lower, not individual investors.

It is entirely possible that we are headed to 1% on the 10-year Treasury as this delta variant is likely to postpone the normalization and reopening of the global economy. I do not believe that the current delta variant threat will ultimately derail it.

Never Catch a Falling Knife, Even in China

China’s supreme leader Xi Jinping surely does not mince words when he wants to make a point. He stopped the IPO of Ant Financial last year, having been angered by the criticism towards the Chinese government coming from Jack Ma, Alibaba (NYSE:BABA) founder and Ant’s parent company. It got so bad for Jack Ma that it looks like he was picked up by the authorities, as he disappeared for a while from public view. Needless to say, this is the main reason why Alibaba stock has not been doing well for a while. 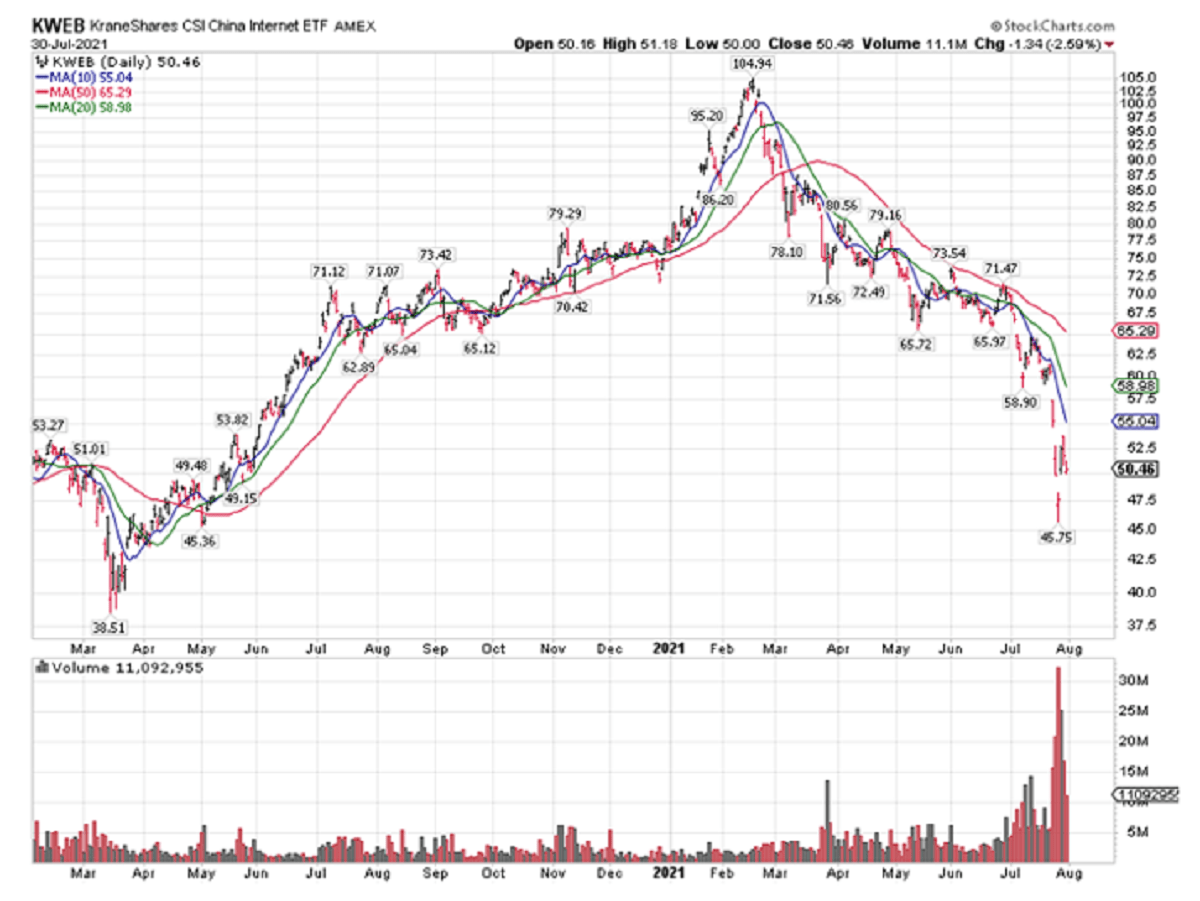 The Jack Ma incident happened in late 2020. By mid-2021, the Chinese authorities’ assault on U.S.-listed companies was relentless. They began messing around with Didi (NYSE:DIDI) right after the IPO and told after-school tutoring companies that they have been “hijacked by capital” and have to re-register as non-profit organizations. The only thing that built out companies like TAL Education Group (NYSE:TAL) are those margins. If there weren’t any profits, there would be no TAL Education Group and there would be no after-school tutoring. On the news, TAL stock went from a high of $90 in 2021 to $4 last week.

I am pretty sure Chinese authorities know that profits are important for the growth of China’s economy, as they practice a hybrid economic model that can only be described as state-sponsored capitalism. It also would appear that they are targeting companies with U.S.-listed stocks in order to hurt U.S.-based investors.

This looks like some kind of a cold war strategy that Beijing has launched, but it is likely to backfire.

Who would want to buy new Chinese listings in that kind of environment?