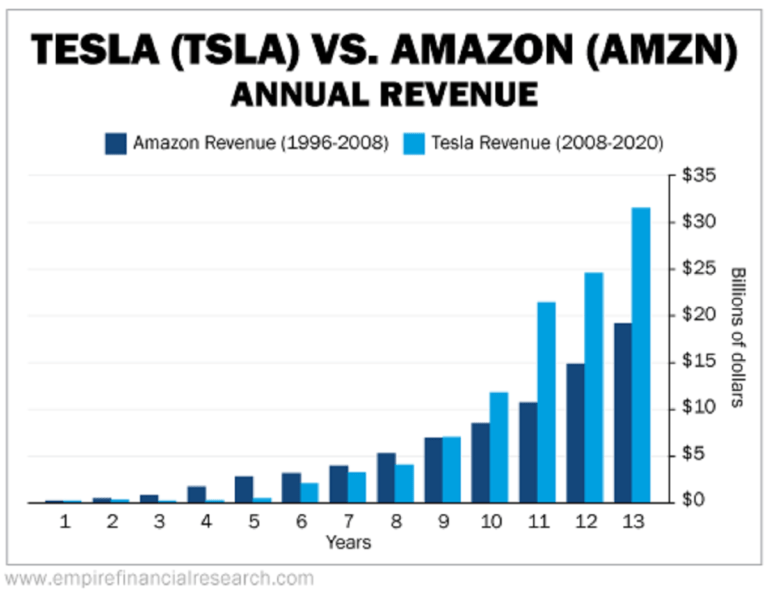 Whitney Tilson’s email to investors discussing how he saved one of his readers $222,318; Tesla vs Amazon; SEC suspends trading in 15 stocks that got hyped on social media; for the economy, the present doesn’t matter.

1) I spend a lot of time in my daily e-mails highlighting risky sectors of the market, fraudulent companies, and/or overhyped stocks.

I do so to help my readers spot investments that might blow them up – either before they invest or, if they already own them, in time to dump them.

So I was really happy to read this e-mail from an old friend who was one of the first Lifetime subscribers to Empire Financial Research. He read what I wrote in my January 21 e-mail – "Veteran short-sellers know that hydrogen fuel cell company Plug Power (PLUG) is nothing but a long-running promotion, dating back more than two decades" – and took action:

When you sent your email on January 21 telling your subscribers what a turkey Plug Power is, it triggered a memory that one of the advisory firms I use owned the stock in one of my accounts.

Sure enough, when I checked, I discovered that I owned 10,350 shares (at a cost of around $8/share), with the stock trading at $63.80/share. I immediately ordered them to sell all of the shares based on your information.

Needless to say: thank you, and keep up the good work!

You know, I gotta figure out what's in the water this guy's drinking because he already made in excess of $10 million – more than 2,000 times his subscription cost! – on just one of our ideas, Virgin Galactic (SPCE), by buying the warrants when we recommended them in the December 2019 Empire Investment Report (at the time the stock was at $10.20 and the $11.50-strike warrants were at $2.50).

To my knowledge, that's an all-time record in the investment newsletter industry for profits made by one customer on one idea (in a matter of weeks, no less)!

2) Following up on what I wrote about Tesla (TSLA) in Monday's e-mail, my analyst Kevin DeCamp put together this interesting chart:

Ah, so this is powerful evidence that Tesla's stock might be a good buy today, right?

While many investors seem to have forgotten this, valuation matters!

I asked Kevin, without looking at historical data, what he thought Amazon's market cap was at the end of 2008 – the last year shown in his chart – when the company generated revenue of $19.2 billion. His guess:

It was in the middle of the financial crisis, which would have depressed the stock price so... $60 billion, or 3 times sales? (All I know for sure is I blew it by missing that crisis low and didn't start buying the stock until years later when it was around $260 per share)

To which he replied:

You could have (almost) less than two years ago...

On June 3, 2019, the day Tesla bottomed at $35.79 per share (adjusted for the subsequent 5:1 split), having been more than cut in half over the previous six months, the stock was trading at only 1.4 times sales.

So why didn't I buy it then? Because I'm an idiot!

That said, I continue to tell my short-selling friends that they're crazy to short an open-ended situation and ultimate story stock like TSLA, and I think those who are buying it today at 23.2 times sales are unlikely to do well over time due to the enormity of the market cap and the extreme valuation...

(But you have a 99% chance of doing better than the suckers buying GameStink (GME) at $250 per share – they will very quickly be incinerated once again! I am so disgusted and disheartened...)

3) With animal spirits once again running rampant in the markets yesterday, this is good to see: SEC Suspends Trading in 15 Stocks That Got Hyped on Social Media. Excerpt:

U.S. regulators are engaging in the stock market's version of whack-a-mole – racing to suspend shares of companies with dubious prospects that have been hyped to the moon on social media.

In a Friday statement, the Securities and Exchange Commission said it temporarily halted trading in 15 companies due to concerns that their stock prices were artificially inflated. One of the companies, a penny stock called Blue Sphere (BLSP), was recently highlighted in a Bloomberg News story after spiking in value following a barrage of posts on online message boards.

For the Economy, the Present Doesn't Matter

4) Here's a good article in the New York Times about the key challenges facing the economy and what investors should be keeping an eye on: For the Economy, the Present Doesn't Matter. It's All About the Near Future. Excerpt:

In normal times, the total employment gains reported Friday would be a blockbuster number. But continuing to add jobs at that pace would still mean a two-year grind back to pre-pandemic employment levels. The question is whether job creation will accelerate in the months ahead as more Americans are vaccinated and begin to resume normal patterns of behavior, especially regarding travel and entertainment...