Starvine Capital Corporation commentary for the first half ended June 30, 2021.

For the half year ended June 30, fully invested accounts in the Starvine Flagship Strategy increased 36.1% to 36.9%, while fully-invested accounts in the Mid-Large Cap Strategy increased 31.1% to 31.8%. During the period, the S&P TSX Total Return Index increased 17.3% and the S&P 500 Total Return Index increased 12% in Canadian dollars (15.5% in USD). The U.S. dollar weakened by 2.8% relative to the Canadian dollar over the first half; this was a modest detractor given the significant presence of U.S. listed equities in each strategy.

The composite figures above are unaudited and include discretionary fee-paying accounts within each respective mandate. Composite results are presented as time weighted rates of return, net of management fees and other expenses. Results will vary with subscription date, most notably for recently formed accounts whose position weightings and cash levels tend to differ initially from the investment strategies. Clients will therefore each have their own net-of-all fees performance results from investing in Starvine. References made to indices may provide clients with a benchmark to compare results. However, the Starvine strategies are operated with a bottom-up framework and thus no effort is committed to tracking any index. Lastly, the composite results displayed above should not be interpreted as a reference for potential future returns.

More than half of the returns in H1 2021 occurred in February, a month when the confluence of the following events caused an unusual result during the first quarter and the semiannual period: (1) company specific catalysts including the announcement of a take-over bid for a holding that was present in both strategies, (2) a rebound of value stocks, and (3) the continuation of a bull market.

During H1, there was a higher than usual level of portfolio turnover as two holdings were replaced in each strategy and a number of rebalancing trades were executed.  Please refer to the quarterly email for clients that I sent in conjunction with this letter for company-specific commentary and the performance statement.

On the administration front, Starvine Capital will soon be able to manage all major account types in Canada as a result of current efforts to add National Bank Independent Network (NBIN) as an additional custodian. Up until now, I have been able to onboard only clients with RRSP, spousal RRSP, TFSA, and non-registered account types. I look forward to being able to help more individuals for whom the Starvine strategies are a good fit.

Getting the Timing Right - The Gazillion Dollar Question

How much does market timing factor into my decision making? The answer is zero.  That is not to say a few others have not timed the fluctuations of the pandemic well or that trying to time the market cannot lead to profits, because it can. It’s just that I know of very few investors who were better served by hoarding large amounts of cash while markets were statistically expensive and then waiting for a big correction. As the old adage goes, “more money has been lost preparing for corrections than the corrections themselves.”

One viable approach for the layman is to faithfully buy into low-cost ETFs that mimic indexes. I believe this option would produce a decent result for most people over a lifetime. It is almost free in that the management fees are negligible - a permanent advantage over all active management options. Even Warren Buffett recommends the passive index approach and has stated that he will have it used for his wife (shocking given the option of investing in Berkshire) after he is gone. However, the present arithmetic embedded in certain indexes - especially the S&P 500 - does not look compelling to me.

There has been no shortage of media coverage or market prognosticators claiming that an imminent market crash is around the corner. Most of the fuel for that argument is supplied by the high price-earnings ratio of the S&P 500. As per the H2 2020 investment commentary I released in January, let us revisit the Shiller PE ratio, which attempts to remove cyclicality in earnings by taking a trailing 10-year average and adjusting past figures for inflation. In January, the ratio was standing at approximately 34x, and now only six months later, it has risen to 38x - a level that has been exceeded only one time in recorded history. 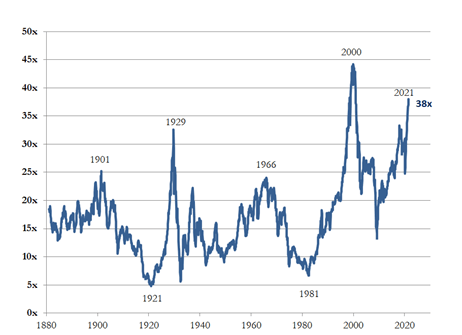 Does the above graph scare you? The truth is I haven’t looked at it since writing the January commentary, and that is because I know the Shiller PE is a weighted average of the index, which is disproportionately affected by mega cap technology names trading at high multiples. The media is referring mainly to the optics created by the above graph, and while one should pause and reflect, there has been little effort by the business news to examine beneath the surface.

If I had limited the scope of my investing only to mimicking the S&P 500, then yes, I would be extremely concerned because I would be subjecting myself to the current valuation.  According to a recent report by Yardeni Research, the market cap share of the S&P 500 represented by FAANGM (Facebook, Apple, Amazon, Netflix, Google, and Microsoft) is 26%, up from 8% in 2013. The notion that one is buying a diversified basket of 500 stocks in the S&P is incongruent with the fact that only six of the constituents (or 1.2% of 500) occupy such a large portion of the benchmark.

It would be misleading to claim that a portfolio of traditional value stocks provides better short term protection against significant market corrections. Logically, it makes sense to expect an undervalued stock to decline less during a sell-off, but in practice that definitely has not been the case for my strategies in any of the drawdowns since inception. In the near term, technical factors can overwhelm rational buying and selling.

That being the case, why not sell half of the holdings and sit on a lot of cash until the next crash? The short answer is that such a decision would mean letting macro fears override the bottom-up assembly of my strategies. Keeping a modest level of cash in the portfolio despite being able to find ample compelling opportunities is fine.  However, sitting indefinitely on a tremendous amount of cash (e.g. >20%) and selling undervalued (or even fairly valued) compounders to achieve that is, in my opinion, not a winning strategy over the long run. Going back to my Q4 2016 letter, the capital gains from holding a stock over a prolonged period can be attributed to the change in trading multiple compounded against the change in the per-share earnings power of a company. Identifying an opportunity that delivers on both drivers will lead to dynamite result. Conversely, overpaying for earnings growth can have the opposite result. Said differently, the long term return on a cash flowing company should resemble the compound annual growth in its earnings, augmented by a lift from multiple expansion if it happens. If an investor can assess and vaguely predict those key levers across a portfolio of stocks over a five to ten year horizon, I would expect market timing efforts on average to be counterproductive.

I have the privilege of managing money because clients entrust me to help them meet their retirement objectives. It so happens that their long term objectives align well with my passion for finding investment opportunities. While not easy by any means, the process never ceases to be fascinating and fun. There is no finite end point for me and no such thing in my opinion as mastery of investing.  We can, however, always strive to improve the quality of our thinking.