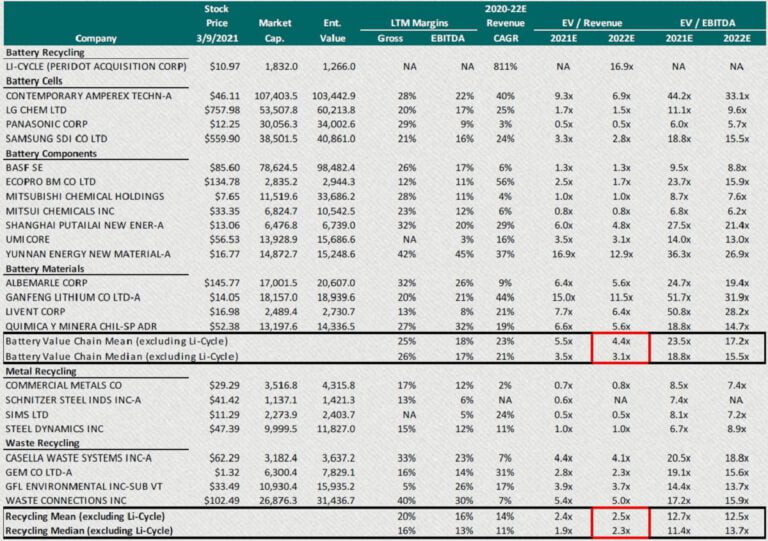 Like many investors, Spruce Point has observed the recent outsized gains in clean energy stocks, notably those tied to electric vehicles. While we have no doubt that long-term winners, and in fact a new generation of industry leaders, will emerge over time, we have equally strong conviction that sector hype, thematic ESG fund flows, inadequate due diligence, and poor valuation discipline have artificially inflated prices for certain companies. There are some companies that deserve the attention –having attracted marquee investors and top quality management with proven experience –while other companies, we believe, are mere pretenders riding the wave of misguided capital flows.

We believe we have identified two egregious pretenders: American Battery Metals Corporation (OTCBB:ABML) and Comstock Mining (NYSEAmex:LODE), two companies with grand ambitions to enter the market for EV battery recycling. We will illustrate why we believe investors’ should heavily discount management’s claims of hundreds of millions of dollars in near-term revenues. We’ve even expose ABML’s exaggerated permitting claims with hard evidence from the city of Fernley, NV documenting that no permits are in process.

ABML was incorporated in 2011 but has spent most of its corporate life as a bulletin board penny stock shell that owns some mineral rights in Nevada. Having never generated any revenue from acquiring or developing mineral properties, in 2H 2019 the Company underwent a strategic review to find new market opportunities and settled upon battery recycling. With a skeleton management team, little cash, and practically no battery recycling expertise, ABML was soon touting its plan to build the largest recycling facility in the world, located not far from the Tesla Gigafactory in Nevada. Not surprisingly, the market took little notice until the EV sector hype reached a fevered pitch last December, and ABML shares surged 20x. If Tesla is going to rule the automotive world, they are going to need a lot more batteries, and thus the world’s supply of key battery materials will struggle to meet that demand. That market opportunity must surely support ABML’s $1.4 billion valuation…right?

Wrong. We believe ABML has characteristics of a stock promotion with little chance of success. At Spruce Point, we focus significant effort on assessing corporate management, and we have rarely encountered a team that raised so many red flags. ABML’s issues run the gamut, from poor disclosure to conflicts of interest to its CEO and Board members’ involvement with past SEC-charged corporate frauds. We believemanagement’s ability to execute, and in fact its integrity, is highly questionable. In that context, we come to view ABML’s ambitious plans and grand claims in a new, and very negative, light. Upon closer examination, we believe ABML has consistently mischaracterized its market opportunity, demonstrated poor execution, and shows all the hallmarks of a retail-driven story stock set-up for failure. We find evidence to suggest one of its“institutional” investors is connected to a FINRA-banned broker, while the CEO has also used a closely-related research firm tied to his broker/dealer Objective Equity.

We were shocked to learn how many members of ABML management hold other jobs, but nothing surprised us more than Chief Resource Officer Scott Jolcover. Mr. Jolcover is also a Nevada brothel owner and is currently employed as a consultant to LODE, which has alsomade a pivot from gold mining into a “green metals” Company. LODE recently formed a venture with Aqua Metals Inc (NASDAQ:AQMS) –another troubled public company -and a little known Singapore start-up to enter the EV battery recycling market. We believe Scott Jolcover is related to Jeffrey Jolcover, who has been convicted of securities fraud, and local media has reported, advises LODE’s biggest shareholder. Like ABML, we’ve conducted aforensic review of LODE’s recycling business claims and believe they have little, if any, chance to succeed. LODE has been led by Corrado De Gasperis, and under his tenure, LODE has consistently failed to hit its objectives and destroyed millions in shareholder value.

Buyer Beware: We believe the potential downside for both companies’ shares is up to 90%.

Spruce Point has assembled a preponderance of evidence to suggest that claims made by ABML management should not be trusted. We believe ABML is poorly positioned in a structurally challenged market. Both management and its corporate practices raise so many red flags that investors should avoid the stock. Insiders were selling stock at prices as low as $0.10 before the recent run up. 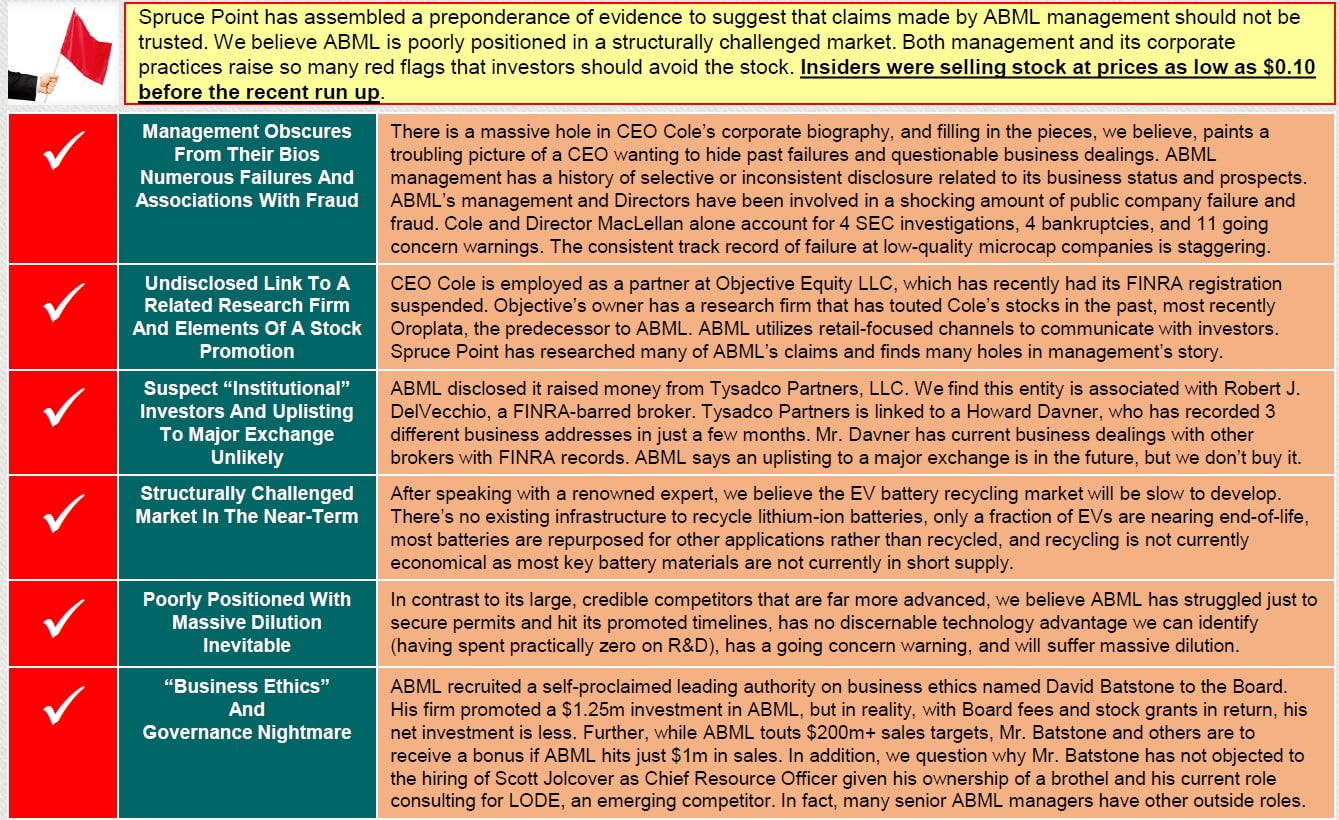 There is a suspicious overlap of people between ABML and Comstock Mining (LODE), notably Scott Jolcover and Mark Vogel. We believe LODE’s recent promotion of its expansion into EV battery recycling is fraught with risks and has a high degree of likelihood to fail. The Company promotes its location near Tesla’s Gigafactory and a “patent pending” related to LiFePO4 battery technology; however, we believe that type of battery is not used by Tesla in the U.S. 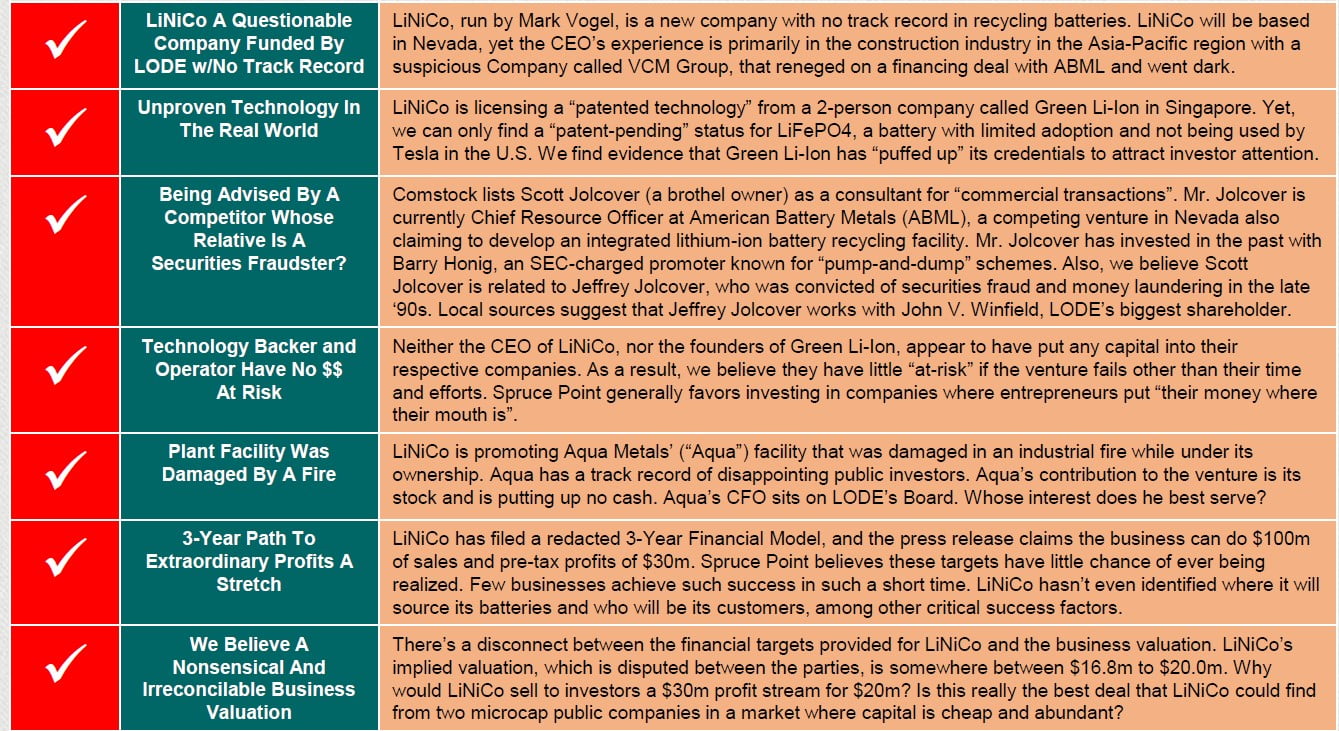