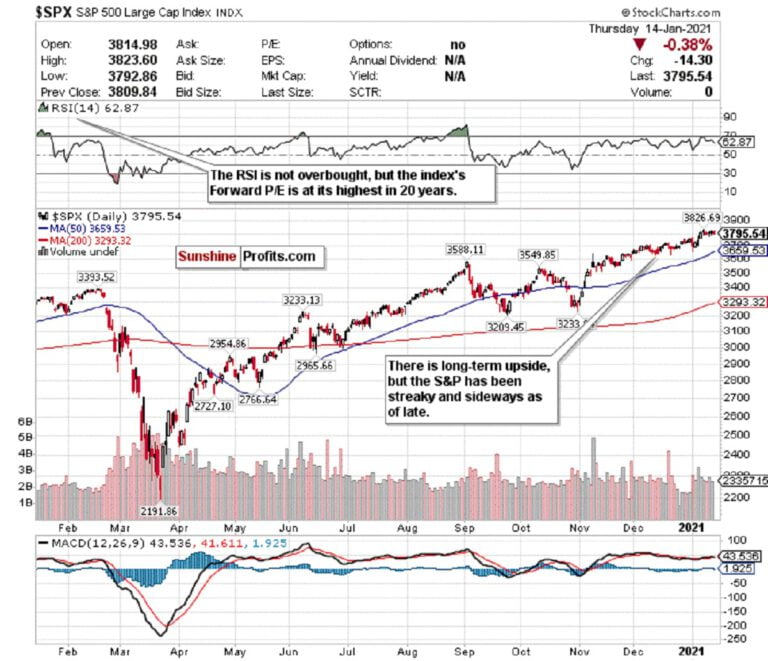 This market reminds me of the days leading up to Christmas Eve 2018. For those who don’t remember, it was a pretty dark day for those trading in financial markets.

I was in the office, alone, and felt particularly responsible for my clients that day. You see, since October of that year, markets had been in a tailspin lower.

“Fundamentals look good, add some exposure to equities here” I found myself saying, more than once. And just when I thought I would get a break, have a half day in the markets, and take a couple days off - boom. Markets fell 2 to 3 percent on the day.

I still remember the feeling, it was like a gut punch. We were unprepared and had added more equity exposure for most of our clients in the prior few weeks. My boss was furious, as I was responsible for allocating hundreds of millions of dollars and we were having our worst quarter ever. I vowed to never be caught unprepared and foolhardy about markets ever again after that quarter.

It was a great lesson, and one that allowed me to flourish in 2020. While I did not foresee a global pandemic, back in January of 2020, things were looking eerily similar to 2018. Markets were frothy, and it appeared that no downside was possible. And I cut exposure for my family assets significantly.

That allowed me to avoid the worst of the pullback, and in March, with an eye on the long run, I took my family assets and picked up several companies at mouth watering valuations, some we hadn’t seen in years.

So far, so good. My old boss would have been pleased - not that it matters…

And now? Well. We’re falling into the same song and dance lately, aren’t we. I have some tips below for those interested, and if you want to know how my personal portfolios have performed, slip into my DMs.

My goal for these updates is to educate you, give you ideas, and help you manage money like I did when I was pressing the buy and sell buttons for $600+ million in assets. I left that career to pursue one where I could help people who needed help, instead of the ultra high net worth. Hopefully, you’ll find the below enlightening from my perspective, and I welcome your thoughts and questions.

Although stocks closed mildly lower on Thursday (Jan. 14), stocks have overall had a strong start to 2021.

Be that as it may, I am still concerned about overheated valuations for stocks and the return of inflation. The S&P 500 is trading at its highest forward P/E ratio since 2000, and the 10-year treasury is at its highest level since March. The Russell 2000 is also up over 37% from its 200-day moving average for the first time in its history.

Overvalued stocks combined with inflation returning by mid-year is quite concerning for me. I feel that a correction between now and the end of Q1 2020 is likely.

I like how economist Mohammed El-Erian described the market as a “ rational bubble .” But he did caution against four major risks that could cause a downturn.

The first two risks, and the least likely are the Fed pulling back on monetary stimulus and the potential for corporate bankruptcies. As Fed Chair Jay Powell said himself Thursday though, (Jan. 14) “be careful not to exit too early,”

The last two risks could be riskier.

Risk Of A Market Accident

The first is “some sort of market accident” akin to the dot-com bubble popping in 1999. THIS is what concerns me most right now. The IPO market is simply absurd right now. The DoorDash (DASH) and AirBnB (ABNB) IPOs were ridiculous, and other IPOs are looking more and more like a circus. Lender Affirm went public on Wednesday (Jan. 13) and nearly doubled. Shares of Poshmark also surged more than 130% in its debut Thursday (Jan. 14).

The other risk is the bond market and its effect on inflation. According to El-Erian, “If we were to see another 20 basis point move in yields, that would be bad news.”

Despite my concerns, it is clear to me that investors are loving the potential for a $1.9 trillion stimulus package under President-elect Biden.

Although a short-term tug of war between good news and bad news could continue, it seems to me that investors (for now) would just prefer to ride this out for what could be a strong second half of the year. According to CNBC’s Jim Cramer , there appears to be a lack of “people willing to sell”.

Be that as it may, jobless claims surged to their highest levels since August, and the pandemic is still out of control. According to Goldman Sachs’ Chief Economist Jan Hatzius, U.S. stocks and bond markets could possibly “ take more of a breather ” in the near term.

Generally, corrections are healthy, good for markets, and more common than most realize. Only twice in the last 38 years have we had years WITHOUT a correction (1995 and 2017). Because we haven’t seen a correction since March 2020, we could be well overdue.

This is healthy market behavior and could be a very good buying opportunity for what should be a great second half of the year.

The consensus is that 2021 could be a strong year for stocks. According to a CNBC survey which polled more than 100 chief investment officers and portfolio managers, two-thirds of respondents said the Dow Jones will most likely finish 2021 at 35,000, while five percent also said that the index could climb to 40,000.

While there is long-term optimism, there are short-term concerns. A short-term correction between now and Q1 2021 is very possible. I don’t think that a correction above ~20% leading to a bear market will happen.

Hope everyone has a great day. Best of luck, and happy trading!

S&P 500's Valuation Is Its Highest In Years 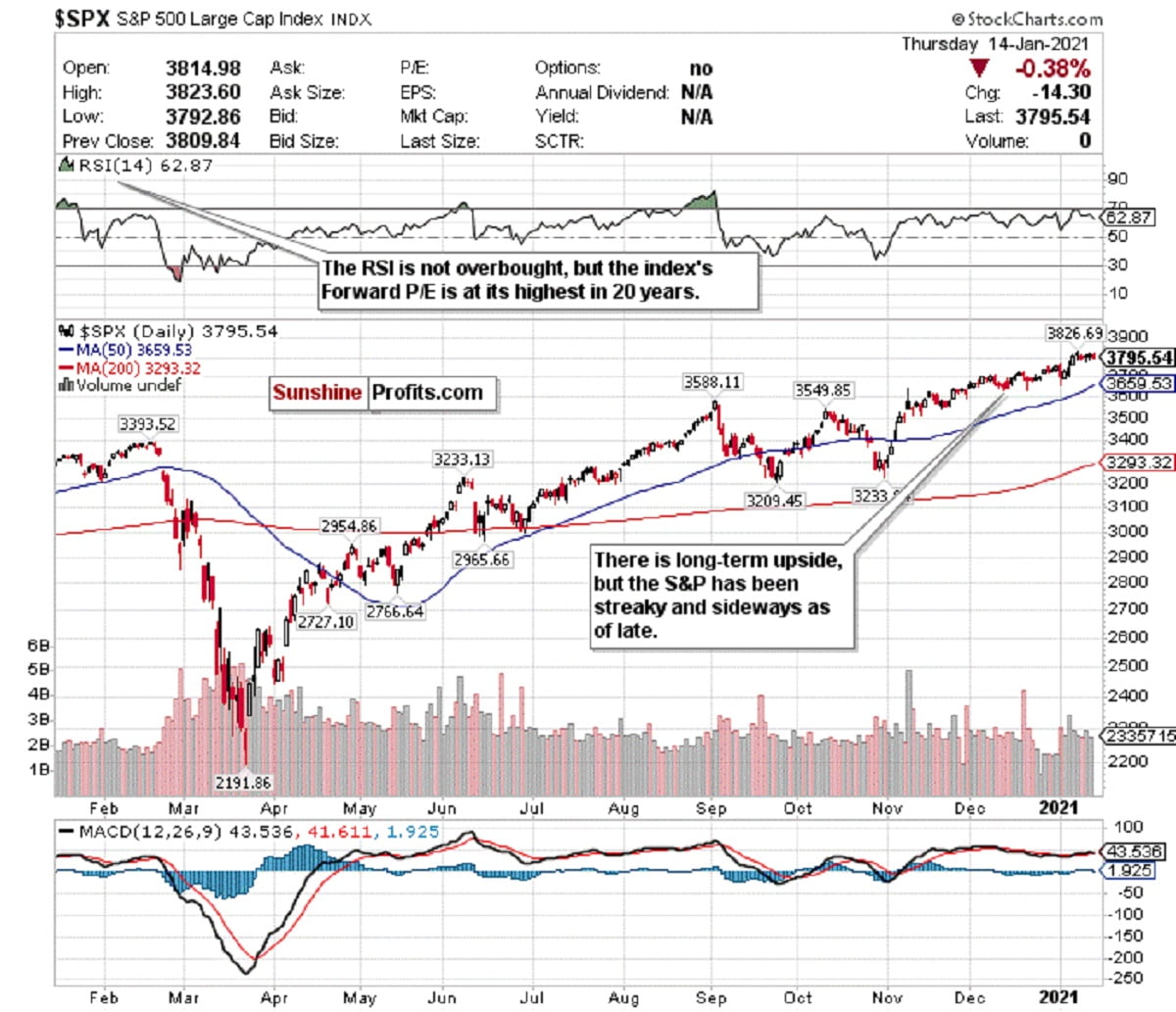 Conventional wisdom would tell you that the S&P 500 had overheated and valuations are crazy. The index’s forward P/E ratio is the highest it’s been in two decades.

The big bank crushed both top and bottom line estimates, and saw a net income growth of 42% from a year ago.

But look deeper into the earnings call, and there are some things to worry about. JP Morgan reported a net benefit of $1.89 billion in credit reserves and is maintaining a reserve topping $30 billion.

Why is this worrying? According to CEO Jamie Dimon, this is because of “significant near term uncertainty” due to the pandemic.

Dimon further added that despite vaccine and stimulus-related optimism, JP Morgan is holding onto these reserves in order to “withstand an economic environment far worse than the current base forecast by most economists.”

The S&P 500 has been trading in a streaky matter as of late and reflects the broader tug-of-war between good news and bad. The index seemingly goes on multiple day winning streaks and losing streaks on a weekly basis. After seeing its worst sell-off since October last Monday (Jan. 4), for example, it went on a four-day win streak and broke past 3800.

We are now back below 3800. Although I always cheer stocks going up and hitting records, I want buying opportunities. I would like to see a drop to around 3600 or below before making a BUY call for the long-term.

For now, my near-term outlook is murky. A short-term correction could inevitably occur by the end of Q1 2021, but for now, I am calling the S&P a HOLD. I would like to see a sharp correction before initiating S&P exposure at a discount. There is clear upside for the second half of 2021, but I would just prefer to maximize the upside from a lower level.