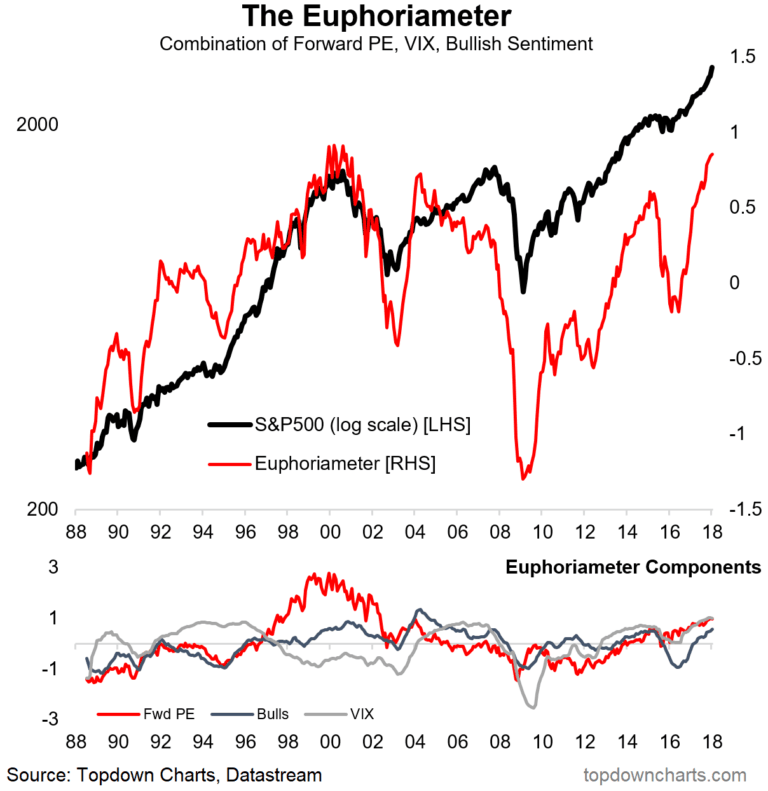 A few weeks ago I wrote a report outlining the sentiment snapshot for markets, the theme was “melt up” as a number of sentiment indicators, both survey-based and market/positioning driven, showed a sense of FOMO (Fear of Missing Out) washing through the market. It’s only natural then to examine whether the selloff last week represents the start of some sort of melt down.

The weekly survey on Twitter certainly provides some nice and timely insights, and we will look at this in detail along with a couple of other key charts that help define the fundamental and sentiment backdrop we are dealing with. On first impression it looks like a shakeout, a "healthy selloff", a reset of overbought conditions, all in the context of still solid fundamentals.
Time and data will tell whether this impression is right (or needs adjusting!), and while I've previously noted how things can enter into a positive feedback loop on the upside, they can just as easily spiral down given the right combination of circumstances and reactions. The best course, as always, is to try keep a cool head and focus on the charts, the data, and the indicators.
The key points on the sentiment snapshot are:
-The weekly Twitter survey shows a meltdown in net-bullish sentiment.
-The collapse in sentiment has been driven solely by a plunge in "technicals" net-bulls.
-The "fundamentals" picture still looks sound, certainly that is the perception by survey respondents both on the bonds and equities side.
-On fundamentals, the earnings revisions picture is the brightest in years, with the earnings revisions ratio at an all time historical high (thanks to tax cuts).
-Yet the dominant mood of the market is euphoria, and it's quite possible that the market action of last week represents the beginning of a new, more volatile phase of the bull market.
1. Finance-Twitter Survey: The latest weekly survey shows equity sentiment took a dive... probably no surprise to anyone who's been paying attention as the S&P500 fell almost -4% top-to-bottom last week. This brings net-bullish sentiment into the negatives at -4, which is the lowest point since September. 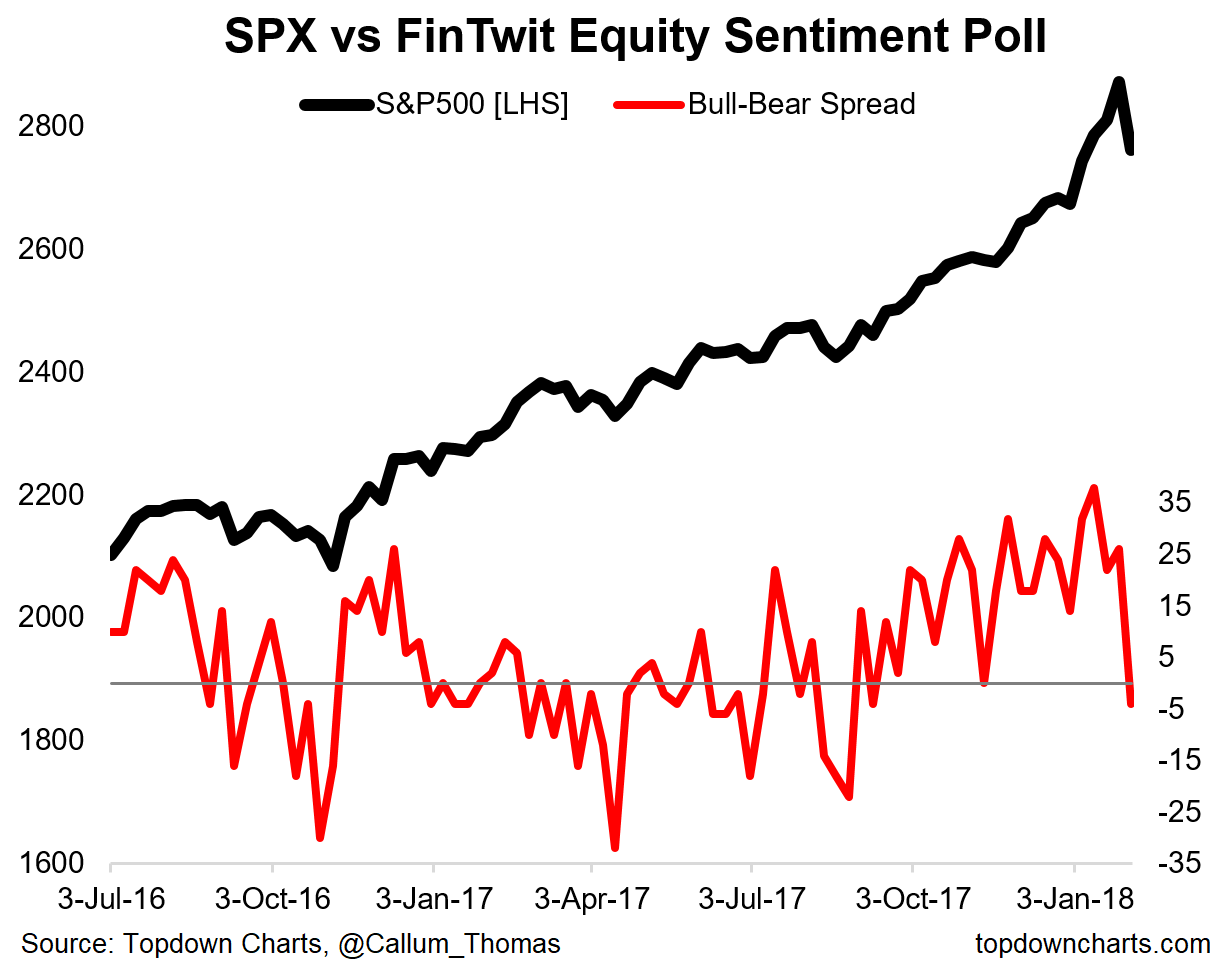 2. Fundamentals vs Technicals: As a reminder, the weekly survey [data available here] of 'Finance Twitter' asks respondents to differentiate if they are bullish or bearish based primarily on either the "Fundamentals" or "Technicals". This chart shows a very interesting picture, where you can see that the primary driver of the drop in net-bullish sentiment was the plunge in "technicals" net-bulls, back to the lowest point since the election! To me this is the most powerful chart in that it shows the average respondent still thinks the fundamental outlook stacks up, basically implying that it's just a shakeout in prices. The flask half empty view will be that there's room for capitulation...

3. Fundamentals Sentiment: Honing in on the fundamentals aspect, you can see on the chart of "fundamentals" net-bullish sentiment for equities and bonds that there has been a major reassessment of the fundamentals since June last year, which to my mind has been fueled by the improving US and global economic outlook, with the tax cuts only adding to the momentum more recently. I would note however, that both of them have started to turn - it may just be a period of consolidation, but this is something worth keeping an eye on, because the key factor that changes a selloff to a correction or something more deeper is a deterioration in the fundamentals outlook - again, my view: no such evidence of that just yet. 4. Earnings Revisions: Keeping with the fundamentals, in some ways you could call earnings revisions a measure of Wall Street analyst sentiment, but either way the record readings in the earnings revisions ratio go to show how much of an impact the tax changes have had on the earnings outlook (along with an existing trend of improvement thanks to stronger commodities, a weaker US dollar, and better nominal growth outcomes domestically and abroad). In other words, back in the real world things are looking pretty good... 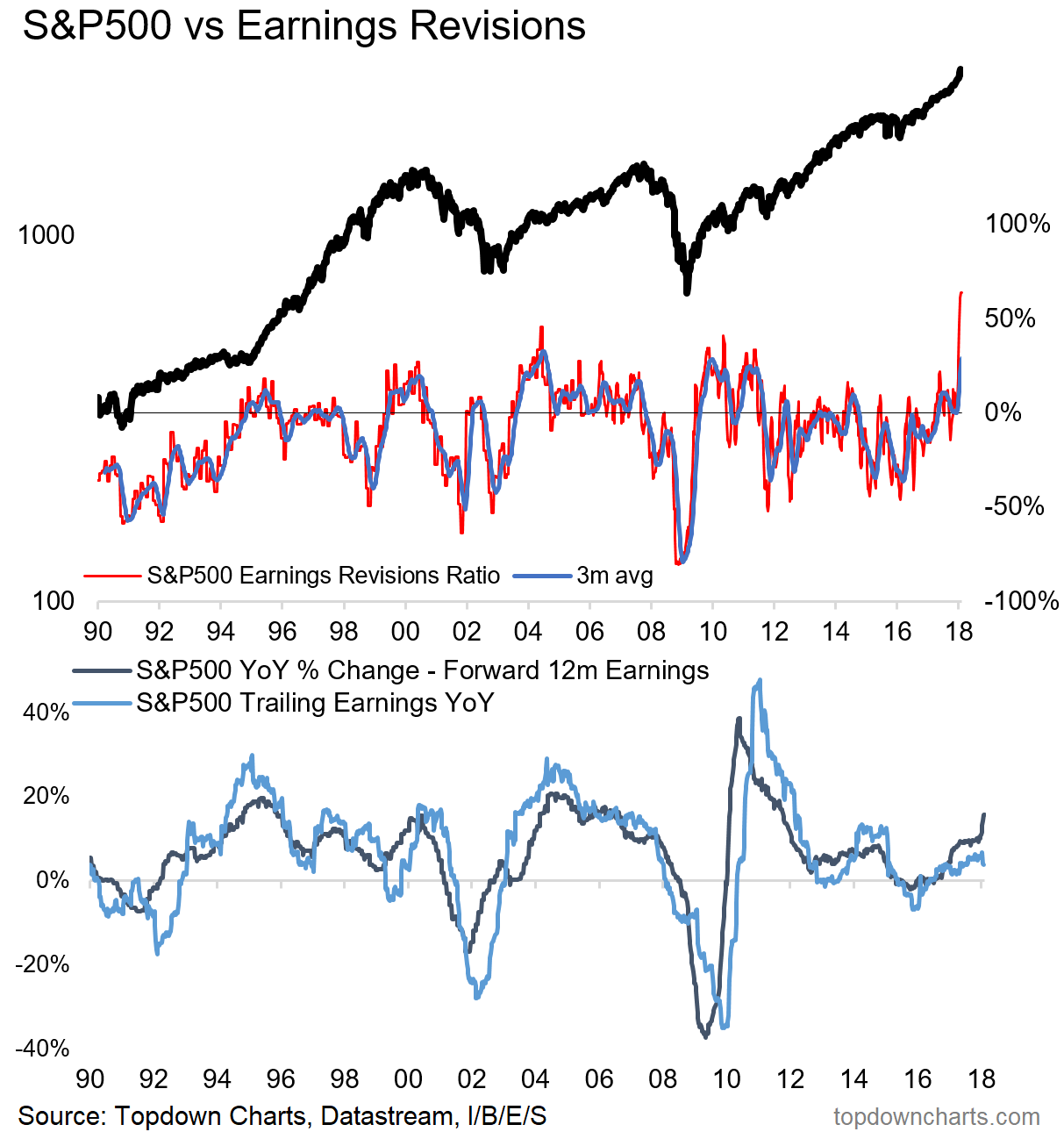 5. Investor Euphoria: As I've previously said, as good as the fundamentals are, most of the biggest bubbles and speculative manias began with a solid fundamental story. And whether or not we are in a bubble now, one thing that we can say is that The Euphoriameter - an indicator designed to take a composite measure of investor optimism - is at the highest point since the dot com boom. And I would say as the more euphoric phase of the bull market takes hold, investors will become more skittish, which combined with FOMO will result in greater volatility. I believe last week was the beginning of a new more volatile phase of the bull market. But more on that in another blog post tomorrow! 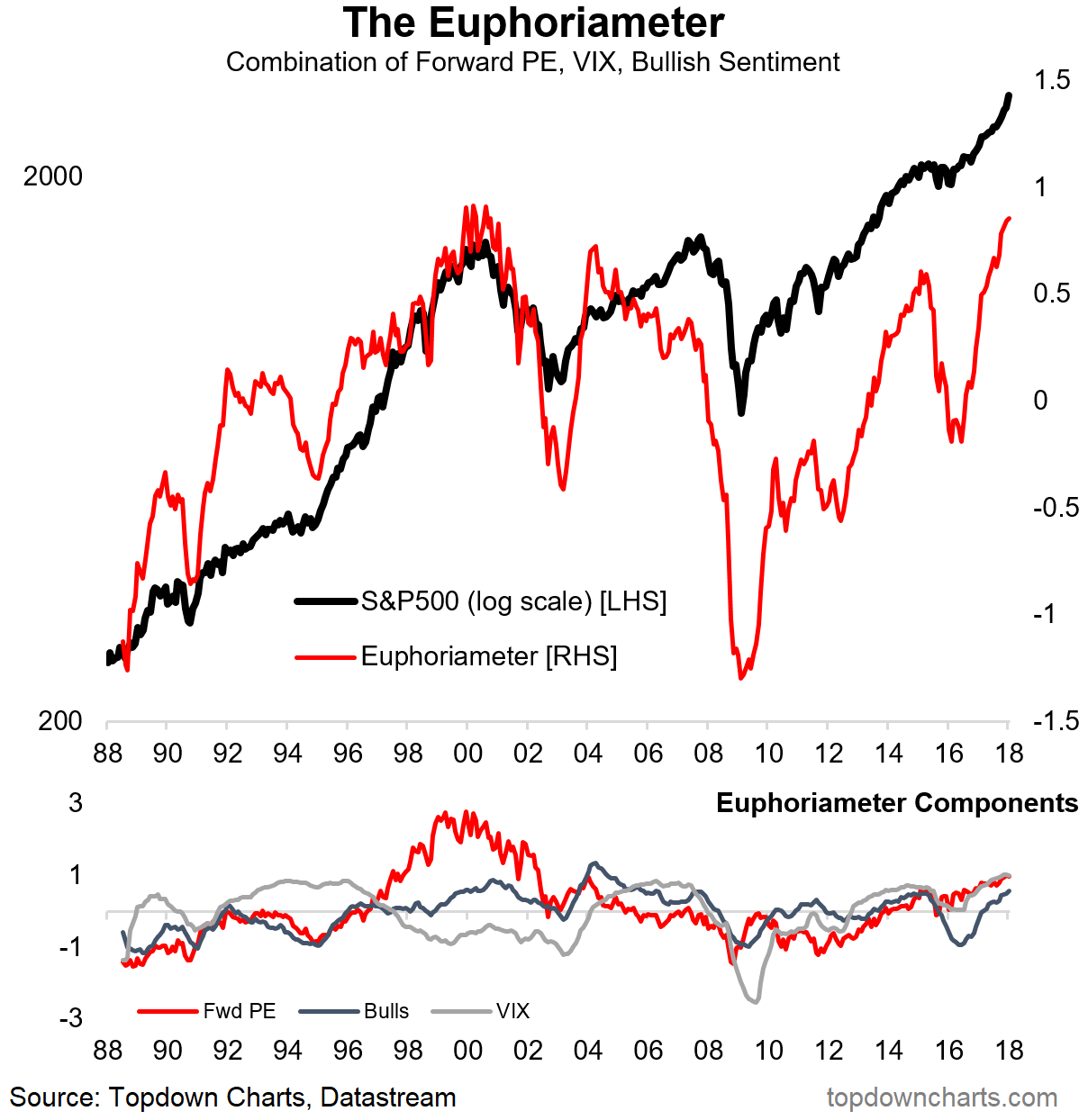