Whitney Tilson’s email to investors discussing super-apps are inevitable; what Europe can teach us about jobs; CEOs from India.

The newest and maybe the most exciting entrants in this contest are coming from the payments business, including PayPal, which owns Venmo, and Square. They already have the transaction network and financial relationships in place with businesses and consumers alike. People trust them. As far as we know, no fintech company has helped organize an insurrection or speedballed teen depression. Such companies print money, not conspiracy theories. They're well-financed and could pursue a titanic set of acquisitions that would change the tech landscape – while reaping trillions of dollars via the ultimate exercise in scale.

The core economic principle of the Internet is the arbitrage of your attention. Some of the most valuable companies in the history of capitalism got that way by taking your online attention (the average American spends some 119 days a year consuming media from a screen, roughly the same amount of time spent sleeping) and monetizing it through subscriptions and advertising. Here is the really mind-bending potential of super-apps: Subscriptions and ads are only part of the full super-app monetization model and not even the most profitable. Taking a direct piece of transactions is staggeringly lucrative, and a company built around payments could make the Meta Platforms Inc (NASDAQ:FB) and Google (NASDAQ:GOOGL) of today look small.

Payment processing is the nonnegotiable super-app service. It's the glue that integrates core features with those provided by third parties on the platform, and it gives users the simple convenience of not having to enter credit-card information across dozens of apps and websites. A shift in the arbitrage of attention, from ads to the more potent payments business, promises to fuel a historic merger-and-acquisition binge that will reshape the array of industries that tech snobbishly calls "content." And the biggest buyers will be in finance – not just startups but Wall Street's Old Guard.

What Europe Can Teach Us About Jobs

2) Here's an interesting op-ed by Nobel Prize-winning economist Paul Krugman on What Europe Can Teach Us About Jobs. I average two to three trips annually to Europe, totaling nearly a month visited each year, and his arguments ring true... Excerpt:

Which brings me to an under-discussed aspect of the current economic scene: Europe's comparative success in getting workers idled by the pandemic back into the labor force.

You're probably aware that the United States is experiencing what many call the Great Resignation – a significant fall in the number of people willing to accept jobs, at least at pre-Covid wages. Four million fewer Americans are employed than were on the eve of the pandemic, yet the rate at which workers are quitting their jobs – usually a good indicator of labor market tightness – has hit a record, and the scramble of employers to find workers has led to rapid wage increases.

(Anytime I link to an essay by Krugman, as I did in yesterday's e-mail, I get flak because he writes for the New York Times, and his views generally lean left, so I try my best to include plenty of articles from the Wall Street Journal, too.) 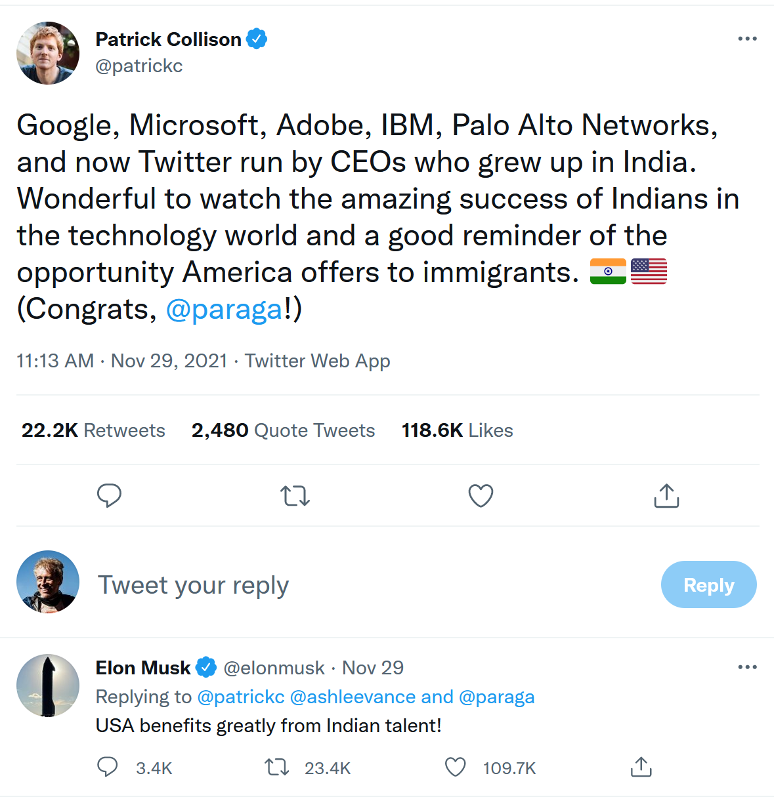 The number of Indians who have achieved huge success in this country is simply extraordinary. One of them even married my cousin – lucky guy! Here's a picture of us:

The best book I've read about the Indian diaspora is, ironically enough, about two of its most successful members who came to ruin: The Billionaire's Apprentice: The Rise of the Indian-American Elite and the Fall of the Galleon Hedge Fund.

The book focuses on Galleon's founder, Raj Rajaratnam (who's Sri Lankan), and Rajat Gupta, who was head of consulting giant McKinsey and on the boards of Goldman Sachs (NYSE:GS), Procter & Gamble (NYSE:PG), and American Airlines (NASDAQ:AAL). They were co-conspirators in an insider trading scandal. Rajaratnam ended up serving eight years in prison while Gupta served two.