By Carl Walter and Fraser Howie


Brook Asset Management had a strong first quarter, is shorting This US education stock [Exclusive] 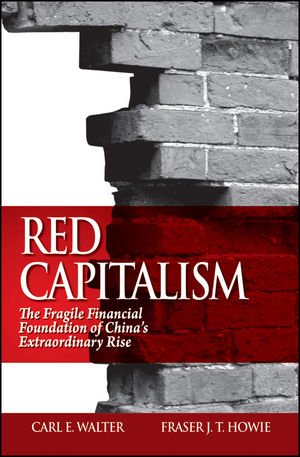 This week, I am reviewing Red Capitalism: The Fragile Financial Foundation of China’s Extraordinary Rise

A regular topic on this site has been the impact of China on American firms, as well as the growing prevalence of Chinese firms listed in the North American markets. The underlying quest here is Is there still value in Chinese investments, or is China a bubble waiting to burst? But it is a real challenge for investors to research companies and get valid answers from a country with weak reporting standards and strong censorship, in a market where capitalism is on a short leash held by communists. And yet, China’s magnificent growth and emergence as a new world superpower fascinates us and continues to attract foreign investment by the billions.

In my efforts to learn more about China’s markets, I recently read Red Capitalism: The Fragile Financial Foundation of China’s Extraordinary Rise. This book provides a good summary of China’s macroeconomic growth over the last few decades without shying away from discussing the systemic fragility that has come along with it, and I thought it was worth reviewing the book in a bit more detail.

As with my last book review, I will be doing a single, slightly longer article (rather than the multi-part reviews I had done in the past). This is an ongoing process, so send me your feedback as to how I can provide you with more value in reviewing these books (send me an email here or leave a comment below). See below to learn how you can win this book!

The first thing that struck me about this book was that it was written by insiders who think like outsiders, two guys with on-the-ground experience that has provided the insight necessary to write a book of this nature. I wouldn’t go so far as to call it an exposé, but it illuminates trends and policies in China that aren’t often discussed, certainly within China and probably not enough outside either. The authors are westerners who have worked in finance in China for years, and they presented their evidence in a logical manner without avoiding or sugarcoating the issues.

Looking Back to Look Forward

The authors start with a review of China’s development, and they describe how, after more than thirty years of holding firmly to socialist ideology with one hand and capitalist growth objectives in the other, the result has been a “jerry-built financial structure.” The book highlights an interesting dichotomy: on the surface, China has all of the makings of a free market economy (stock exchanges, an independent central bank, commercialized and publicly listed state banks, membership in the World Trade Organization, and astounding volumes of trade and foreign direct investment). But, digging deeper, the authors contend that these liberalizations have been allowed only where they strengthen the state. In so doing, the Communist Party has been directing liberalization to protect the state’s interests – a seeming contradiction of the free market!

“We should not bring that American stuff and use it in China. Rather, we should develop around our own needs and build our own banking system.” ~ Chen Yuan, Chairman, China Development Bank

At the center of China’s so-called fragile foundation is its banking system, which is centrally controlled by the government and has historically been majority-funded by the people. Chinese households are huge net savers, in the aggregate forming the most significant source of private capital for Chinese banks. Chinese banks, in turn, provide unlimited capital to China’s state-owned enterprises and therefore the country’s financial risks are entirely concentrated on the banks’ balance sheets. The government consistently works to protect its banks from competition, seemingly managing risk for all parties involved. This unsteady relationship has weathered, over three decades, three rounds of virtual state bank bankruptcy, surviving only because the Party has provided its full support and commenced several rounds of bank reorganizations and restructurings.

By 2006, three of the four state owned banks were in such states of disrepair that they had to complete international IPOs to replenish capital and avoid bankrupting themselves, the state, and Chinese savers. After their IPOs the banks led their global peers in terms of market capitalization. There was only one problem: the State maintained overwhelming majority ownership in each of the four banks. At the end of 2008, China’s government was facing a potential collapse of its export-driven economy, and ordered the banks to “lend unstintingly,” removing any appearance the banks had maintained of independent governance and risk control. By the end of 2009, the banks had lent more than US$1 trillion and were suffering again from poor capital-adequacy levels.

By April 2010, China’s four largest banks had announced huge capital-raising schemes totaling US$42 billion, which the authors contend is, “an astounding amount, coming as it does only four to five years after their huge IPOs in 2005 and 2006.” This highlights a flaw in the Chinese banking system model: they require large chunks of new capital at regular intervals, a likely after-effect of lending binges with below-average lending standards, and a very fragile business model. While market capitalization growth may entice some investors, the authors propose another explanation for investors who might be tempted to see value in the Chinese banks

“…minority international investors acquired stock [in Chinese banks] that varies in value in line with market movements. This gives the impression of value creation on their portfolios, but these movements are, in fact, due more to speculation on market movements driven by any number of factors including, for example, overall Chinese economic performance. This should not be confused with value investing: the banks themselves are not putting the money to work to make the investor capital return. For this reason alone, the market-capitalization rankings are misleading.”

Another red flag with the Chinese banking system is the continual practice of hiding bad loans. In the last few years, the Chinese government oversaw the transfer of $170 billion of problem loans (at full face value) to asset management companies (AMCs), effectively cleaning the balance sheets of its banks. Most recently, another $198 billion were transferred. The AMCs sold bonds in order to raise the capital to purchase these bonds. As the bonds became due in 2009, the AMCs extended the bonds’ tenors a further 10 years. By removing the consequences for poor lending policies from those who initiate the loans, the government has created a risk free environment that has fueled the greatest debt binge in history. Though verification is difficult due to the sector’s opaqueness, a large portion of these loans are expected to already be in default. In short, state-owned enterprises don’t repay their loans, banks don’t worry about the loans not being repaid, the Party takes responsibility and helps the banks hide the bad loans, and public scrutiny is not allowed because it is all state controlled.

China’s situation is somewhat unique. It does not face the same crises as Mexico, Argentina, Greece and Spain. It does not borrow money from overseas, its currency is not freely convertible, and its banks do not face substantial foreign competitors. From the authors:

Over the past 18 years, China has developed equity and debt-capital markets, a mutual-funds industry, pension funds, sovereign-wealth funds, currency markets, foreign participation, an internationalist central bank, home loans and credit cards, a burgeoning car industry and a handful of brilliant cities. As it looks like the West, international investors easily accept what they see; they are excited by it because it is at once so familiar and so unexpected. …They would not feel this way if China explicitly relied on a Soviet-inspired financial system even though, in truth, this is largely what China remains. … China is an economy that, from the outside, appears as a huge growth story… [T]his is just the surface…

Buy This Book Here or Win This Book!

As I have done with the last few book reviews, I will be using this book as an award for the best investment idea sent to me during the next month. Email me your investment ideas here.

Note: In assessing the quality of your investment idea, I will be looking at how it fits with the investment philosophy I espouse on this site and the strength of the supporting arguments (which can include excel models) as well as the identification of potential pitfalls. I hope that all of those who submit ideas will get some value out of the ensuing discussions. Good Luck!!