In this article, I put forth a novel thesis that; there is connection between the depletion of large-bodied native species herbivores, wildfires, and accelerating ocean acidification (‘OA’).

Let’s first examine what is believed to be currently happening with our atmosphere and oceans in regard to the release and absorption of carbon related man-caused (anthropogenic) pollution:

The Impact Of Ocean Acidification 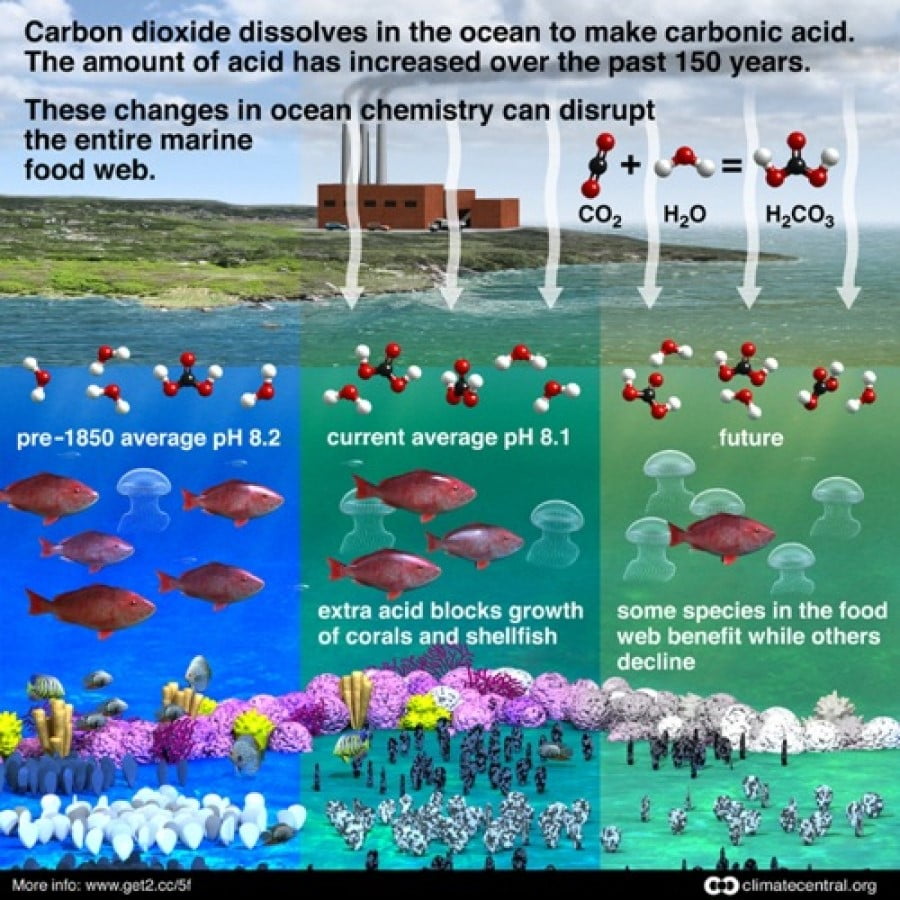 Ocean acidification is already impacting many ocean species, especially organisms like oysters and corals that make hard shells and skeletons by combining calcium and carbonate from seawater. However, as ocean acidification increases, available carbonate ions (CO32-) bond with excess hydrogen, resulting in fewer carbonate ions available for calcifying organisms to build and maintain their shells, skeletons, and other calcium carbonate structures. If the pH gets too low, shells and skeletons can even begin to dissolve. ~ NOAA 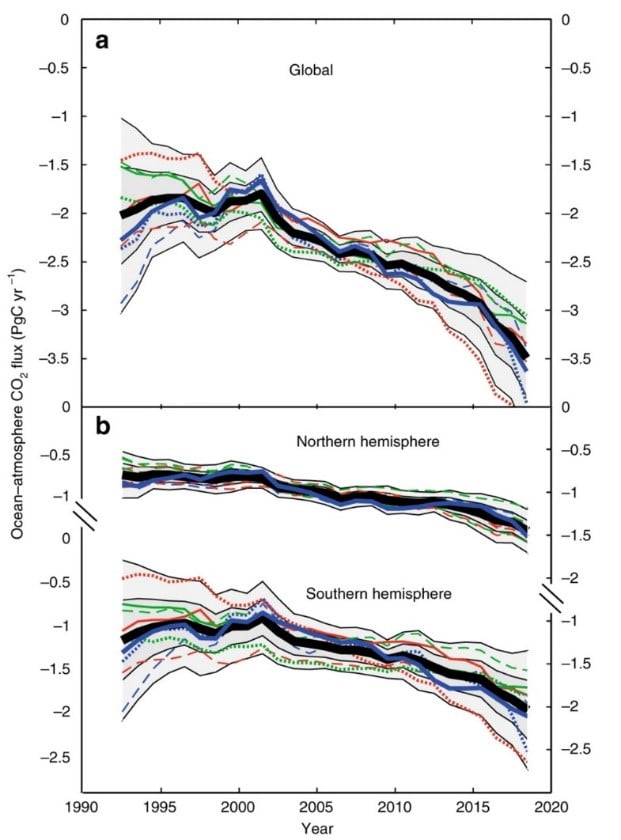 Charts above also show atmosphere-ocean CO2 exchange for a) the globe, and b) for northern and southern hemispheres for 1992-2018. The colored lines show nine different interpolation schemes for CO2 exchange, and the shading indicates one- and two-standard deviations of the nine methods around the mean (thick black line). Source: Watson et al. (2020).

“Two scientists estimate separately for The Energy 202 that the fires in California this year through mid-September burned enough forest to put about 90 million metric tons of carbon dioxide, the most important greenhouse gas, into the air. For perspective, that's some 30 million tons more than the total CO2 emissions from providing power to the entire state.”

“Guido van der Werf, a wildfire emissions expert at Vrije University in Amsterdam who with Andela helps maintain the Global Fire Emissions Database, agreed that his estimate of 90 million metric tons released by fires burning up and down the state from Northern California to rural San Diego County is rough.”

“But one thing is clear: “What is pretty certain is that this year beats the previous record in the satellite record (starting in 1997) … by a large margin,” van der Werf wrote in an email.”

The illogical use of fire (prescribed and controlled burns) to address grass and brush fuels is nothing more than a band-aid being used to address poor wildlife and natural resource management. The occurrence of prodigious excess grass and brush fuels coincides with the observed collapse of the herbivory in many areas around the world, including in the western United States.

In some cases, we find that governmental agencies including the United States Forest Service (USFS) and the Bureau of Land Management (BLM) have employed the use of what is termed ‘prescribed burns’, which in light of certain facts are, contradicted burns.

“May 10, 2000, was the day the wind-driven Cerro Grande Fire roared into Los Alamos, destroying 235 homes and displacing more than 400 people. Homes would still be burning five days later, though no one would perish. The monstrous wildfire, which began as a prescribed burn ignited by federal crews but raged out of control, also spread to Los Alamos National Laboratory’s forested lands, burning dozens of structures and threatening a facility that housed radioactive material.”

These attempts to manage grass and brush wildfire fuels in wilderness areas via burning are also sometimes termed ‘controlled burns’, in some cases actually become deadly uncontrolled burns. These man-created fires are also producing large quantities of CO2 as well as other toxic carbon compounds, which like the smoke from wildfires, adversely affects the health of humans and wildlife.

And at a time when more native species large-bodied herbivores are desperately needed on wilderness landscapes for wildfire fuels reduction, wild horses in the state of California, which number less than 5,000 total animals, are being rounded-up by the BLM and the USFS and held off-range at great cost to taxpayers.

The correlation and timing of the depletion of California’s deer and wild horses and the genesis of the catastrophic wildfire in California (and other western states with the same issues) over the past 15-years supports the study by Professor William J. Ripple: 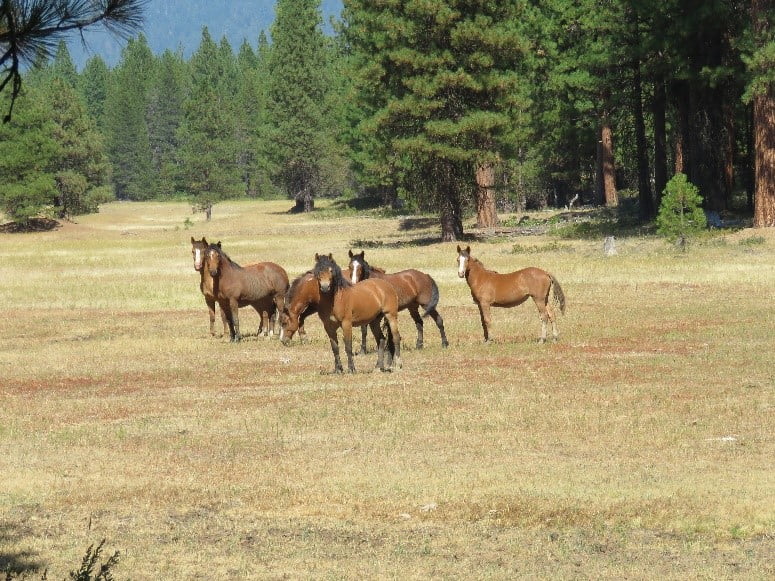 The foregoing correlations between the collapse of populations of large-bodied herbivores and resulting prodigious excesses of grass and brush fuels, which are now subjected to warmer climate conditions, results in an increase in both the frequency and intensity of catastrophic wildfire.

In order to truly comprehend the scope of the wildfire CO2 pollution that is affecting the atmosphere and subsequently our planet’s oceans, this general overview of the CO2 production from wildfires in some areas during 2019 is an eye-opener (data from Bloomberg Green and Copernicus Atmosphere Monitoring Service/ECMWF)

“These enormous blazes—some the size of a small country—aren’t just destroying native forests and vulnerable animal species. They’re also releasing billions of tons of greenhouse gases into the atmosphere, potentially accelerating global warming and leading to even more fires.”

It seems certain that ocean acidification (OA) is being accelerated by CO2 production from the evolution of catastrophic wildfires that are now emitting CO2 (and other carbon compounds) on a magnitude of billions-of-tons annually.

However, the OA that is occurring from wildfire smoke (CO2) could arguably be slowed by reestablishing flourishing populations of native species herbivores into ecologically and economically appropriate wilderness areas, where they would naturally reduce wildfire fuels.

There is a Plan and a proposed draft legislative outline for a bill to accomplish the reestablishment of native species American wild horses in ecologically and economically appropriate wilderness areas. That Plan is called the ‘Wild Horse Fire Brigade’.

Wild Horse Fire Brigade is an important first step towards a sensible cost-effective solution for reducing both the frequency and intensity of catastrophic wildfires.

Wild Horse Fire Brigade can initially and immediately be undertaken via the re-wilding of the approximate 50,000 native species American wild horses currently held in captivity. These native species American wild horses have been rounded-up by the BLM and are being held in corrals by the BLM at great cost to American taxpayers and to the environment since they cannot engage in their evolved natural roles as symbiotic keystone herbivores reducing wildfire fuels.

The aforementioned action could be cost-effectively augmented via the humane relocation of native species American wild horses from areas where wild horses and livestock are commingled and in conflict, and into ecologically and economically appropriate wilderness areas, as outlined in this published article.