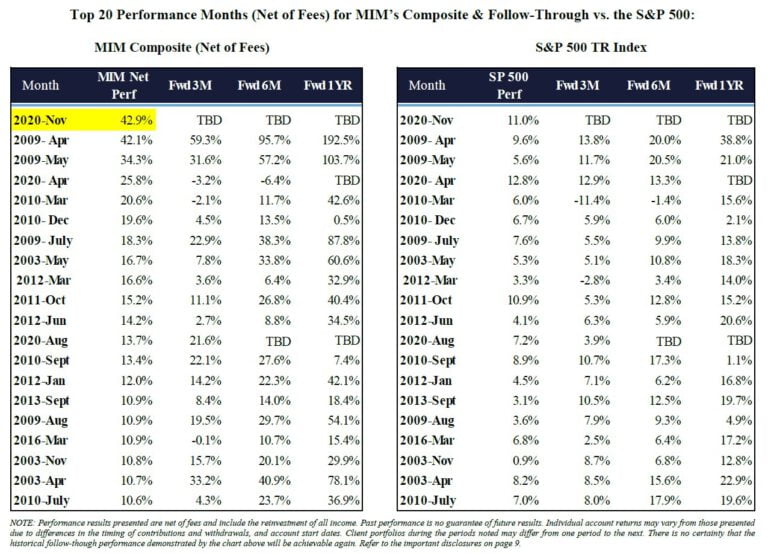 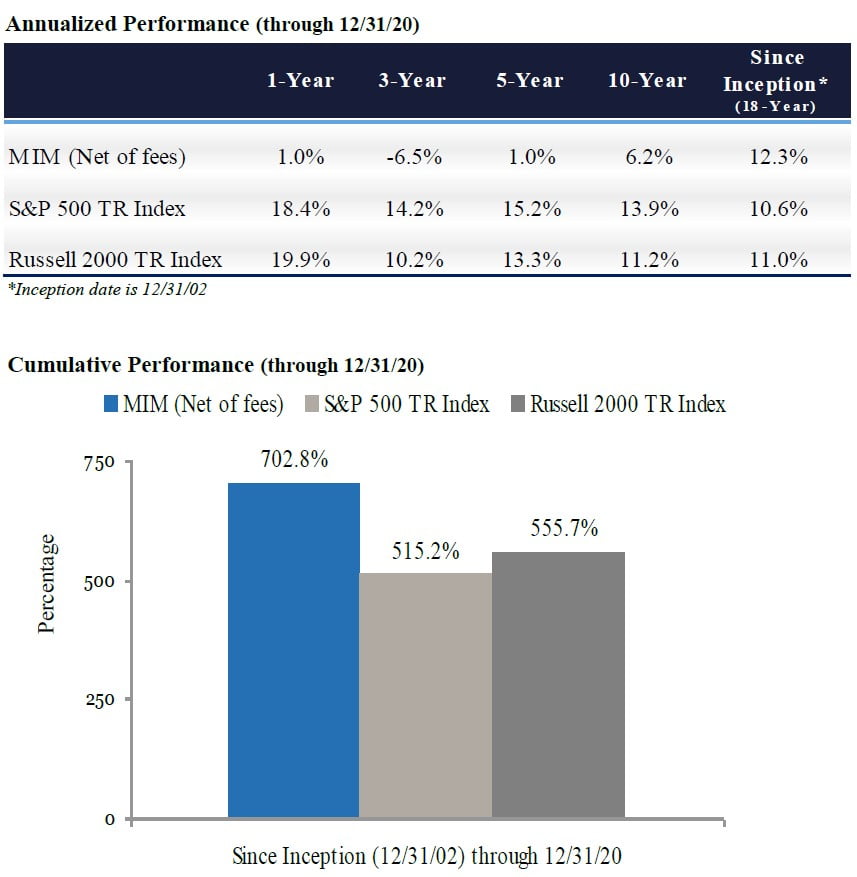 Q4 2020 saw a long-awaited rebound in value-oriented investment strategies like ours, a rebound which began in earnest for us in November when our Composite gained 42.9%; our best monthly performance in an 18-year history (12/31/02 to 12/31/20) as highlighted on the next page.

During the Corona-crash in March 2020, we called for calm in an email sent on March 11th entitled “Why We Don’t Panic.” (Please email us if you would like another copy). As the panic flared further we held a conference call for clients on March 23rd to assuage concerns, and that day turned out to be the actual bottom, with MIM portfolios (as measured by our composite) down -51% YTD at that point, the S&P 500 Index -30%, and the Russell 2000 Index -40%.

From that day (3/23/20) to 12/31/20 MIM’s composite gained +106%, vs. +70% for the S&P 500 and +99% for the Russell 2000. Still, that was not enough to beat those indices for the full year 2020, given our underperformance from 12/31/19 to 3/23/20. Our performance in 2020 was less robust than it might have been due to our heavy concentration in normally recession-resistant stalwarts that became pandemic epicenter stocks (movie theaters, cosmetics, gaming), but we believe those investments will pay off handsomely in 2021, and to some extent have already done so as of the date this letter is published.

We’re optimistic that the long overdue shift back to value stocks may have some legs to it, due to all of the fundamental reasons that we and others in our camp have cited many times before, albeit prematurely, but also in part due to our prior experiences. The table below (on the left) shows the MIM Composite’s 20 best months of performance since inception (November 2020 was the best), and what followed such swings in the pendulum over the following 3, 6 and 12-months. Past performance is not a guarantee of future returns, but we think the data is encouraging. 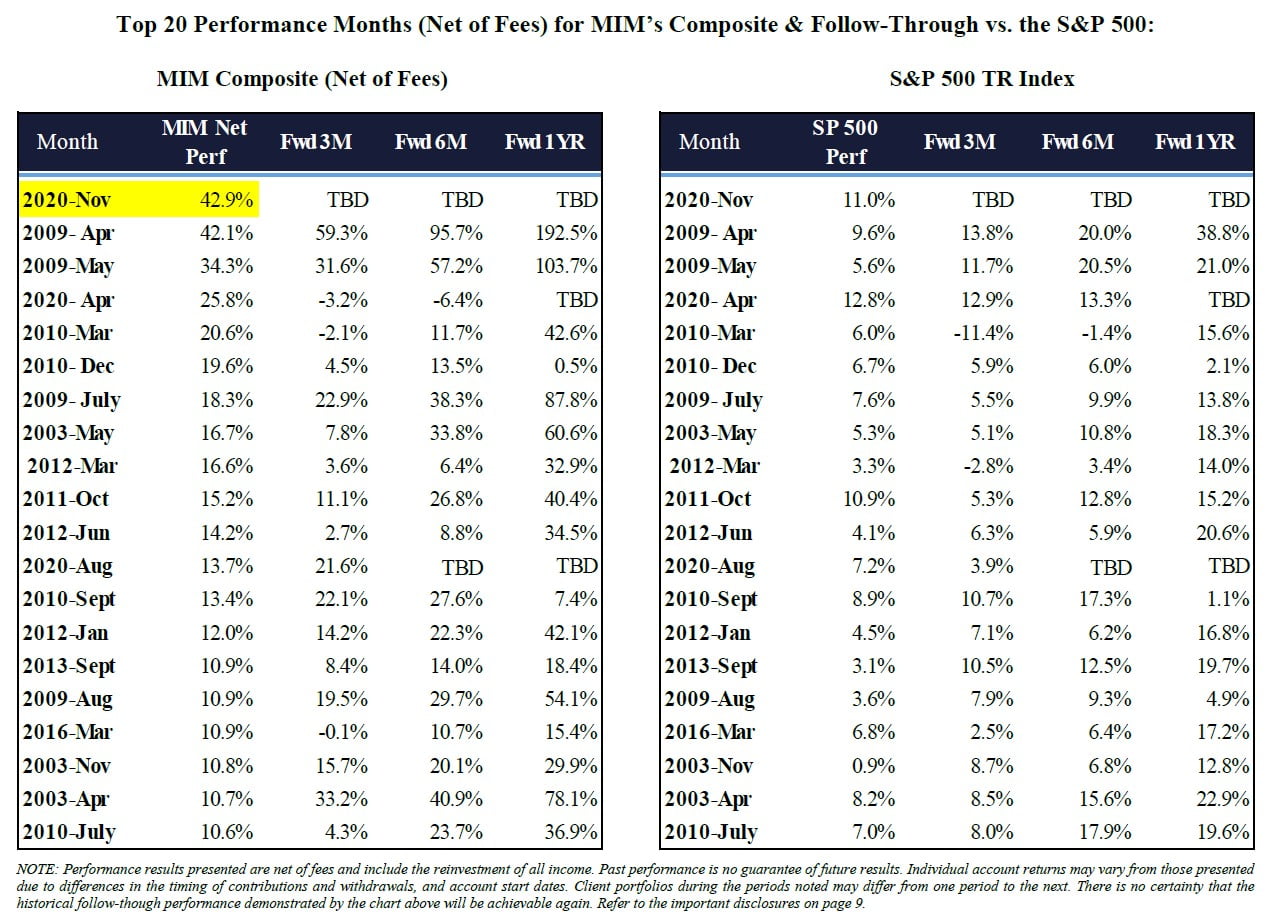 Village Roadshow shareholders benefited from our (MIM & Aimia combined) activism alongside an unaffiliated activist from Australia, which resulted in getting a better price (from A$2.22 to A$3.00) from BGH and VRL’s management in that MBO takeover, but it was still much less than the A$5.00+ that I continue to believe is fair value. I made a strong argument in support of holding out for that price (http://www.mittlemanbrothers.com/wp-content/uploads/2020/11/Village-Roadshow-Beyond-COVID-19-Presentation.pdf) but I could not muster enough votes to stop it from going through. I take solace in having helped to achieve a 35% improvement in consideration paid to all VRL shareholders, but it was much less than we deserved, so I will likely grouse about this for many years to come. That said, the MIM & Aimia partnership on VRL showed the powerful synergy the two entities can summon when a common interest is involved, because had Aimia not joined the fight, MIM alone would not have had the votes to help scuttle the initial bid which was abhorrently low. So I am grateful for Aimia’s assistance on that project.

Revlon was covered at length in our Q3 Investment Review and fortunately my prediction that Ron Perelman would assist their refinancing needs did in fact play out favorably, so the junior bonds that I referenced in that letter went from under $30 to par ($100), and the stock had a similar percentage move before pulling back a bit. So, here’s a case where the entire capital structure was priced assuming a $0 outcome for the equity, but the experts failed to properly price the Perelman factor. The lesson: the price of a company’s debt is not always more accurate or instructive than the price of its equity. Anyway, Revlon still has a lot of work to do to get out of the woods completely, but they are getting there. The sale of a royalty stream that they had been getting from Helen of Troy (HELE) for primarily Revlon hair dryers was an unexpected $72M in cash announced on Dec. 22nd. I think other discrete chunks of value like that will be realized soon (for example, American Crew men’s hair styling products (major market share in mass market and salons, globally), probably worth $200M to $300M), if the entire company is not sold.

Greatview Aseptic Packaging was touched on briefly in our Q3 Investment Review, but I will provide a more detailed update here because we’ve been increasing the weighting, to about a 10% portfolio position, our 3rd largest holding after Aimia and Cineplex.

For a less time-consuming and more up to date synopsis of GA Pack’s history see here: https://greatviewpack.com/company/history/

Jardine Strategic (JS SP) bought 28% of GA Pack for HKD 5.00 in June 2017 (via block trades in open market) and stated that they would seek to help them expand, presumably through Jardine’s connections throughout Southeast Asia, particularly in Indonesia.

The Beijing Winter Olympics beginning Feb. 4, 2022 should boost demand and attention as GA Pack’s major customers are Yili (#1 market share in dairy products in China, official sponsor of 2022 Olympics) and Mengniu (#2 market share in dairy in China, partnered with Coca-Coca in a broader beverage sponsorship for 2022 Olympics and beyond). Both of GA Pack’s major customers, Yili and Mengniu, trade at north of 20x EBITDA. 66% of GA Pack’s sales are from China, and 84% of total company sales are to dairy producers. Dairy consumption per capita in China is still very low, at about onethird of what it is in the U.S. and Europe, despite huge growth over 20 years.

Aseptic packaging is growing at a much faster rate than packaging in general due its main benefit of providing long lasting shelf life (6 to 9 months) for liquid milk and juices and other items without the need for costly cold transport or cold storage which is particularly lacking in the faster growing emerging markets. Aseptic packaging is environmentally friendly, despite the difficulty in recycling it, due to its overall lower carbon footprint. It packages a growing number of products beyond the most common items such as milk, fruit juice, and coconut water; items such as soups, sauces, baby food,and even wine now: https://www.banditwines.com/

Tetra Pak (privately held) is by far the largest player with 65% of the global market for aseptic packaging, while SIG Combibloc (SIGN SW, CHF 20.48) the #2 player with a 21% share, and GA Pack (as it’s known in the industry) is #3 with a 5% global share. There are a few other major providers like Elopak of Norway, but all are private or subsidiaries of larger companies. Greatview Aseptic is #2 in China with a 13% share, but SIG is closing in fast, opening a large new plant there this year. That said, SIG has been in China since 1985, and Tetra Pak since 1972, whereas GA Pack began in 2003, so they have done very well in a relatively short period. Milk is the biggest end use in China, where 70% of milk bought by consumers is processed via Ultra Heat Treatment (UHT), which Tetra Pak introduced in the late 1990s and triggered the boom in milk production and aseptic packaging, relegating pasteurized milk with its short shelf life to 30% market share vs. the long shelf life of UHT milk.

Greatview is an “NSS” which stands for “Non-System Supplier” which means they are mainly about selling the razor blades (the packaging paper), not the razors (the filling machines/system). They had primarily been making money by undercutting Tetrapak in that way, and now in response to SIG’s more aggressive expansion in China, GA Pack will now begin providing the packaging sleeves that work with SIG’s machines: https://greatviewpack.com/company/news/2020-06-19-greatview-aseptic-establishes-as-a-trusted-supplier-of-blank-fed-aseptic-cartons/

Demand for this type of packaging appears primed for growth for years to come, especially in China, as they shift towards a consumer-led economy, and GA Pack should be able to continue to capture some portion of that growth. They are operating at about only 55% of capacity vs. industry normal 65% to 75%, so they have plenty of room to grow production without adding new capacity / cap-ex.

Below is a slide from SIG’s Nov. 2020 presentation. It shows how the filler machines take some time to get a pack-back on their initial cash out-flows. And while GA Pack did begin selling some filler machines in 2019, they mostly avoid that cost by selling mainly just the razor blades, at a price that is 5% to 10% less than Tetra Pak and SIG charge.

Organic Valley explains their use of aseptic packaging at this link: (relevant excerpt below):

“What is Shelf-Stable Packaging?

Packaging plays a critical role in making aseptic milk different from the milk you typically find in the refrigerator. For Organic Valley shelf-stable milks, we use Tetra Pak cartons, which contain six layers in a laminate of three materials: 70% high-quality paperboard, 24% polyethylene plastic, and 6% aluminum.

Paper provides stiffness, strength, and a space-efficient brick shape. Polyethylene makes up the innermost and outermost layers to make the package liquid-tight and provide a protective exterior coating to keep the package dry. An ultra-thin aluminum layer forms a barrier against light and oxygen. In addition, shelf stable milk is packaged in special plants that use fully enclosed equipment to ensure everything stays extra clean.

The combination of UHT ultra-pasteurization and shelf-stable packaging eliminates the need for refrigeration and prevents spoilage without the use of preservatives. This gives the milk an amazing shelf-life of 6 to 9 months! Far beyond anything you’d find in the refrigerator.”

GA Pack’s stock is underfollowed now: The stock was covered by many analysts as recently as Jan. 2015 (Macquarie, HSBC, Goldman Sachs, RHB Research, Mizuho, JP Morgan, and Kim Eng (see HSBC example below). But, now after 5 years of lower than expected growth (increased competition from larger and smaller players, and tariff / trade war issues), only Macquarie and Daiwa Securities appear to maintain coverage (according to Bloomberg), rating it outperform and buy with HKD 5.00 price target.