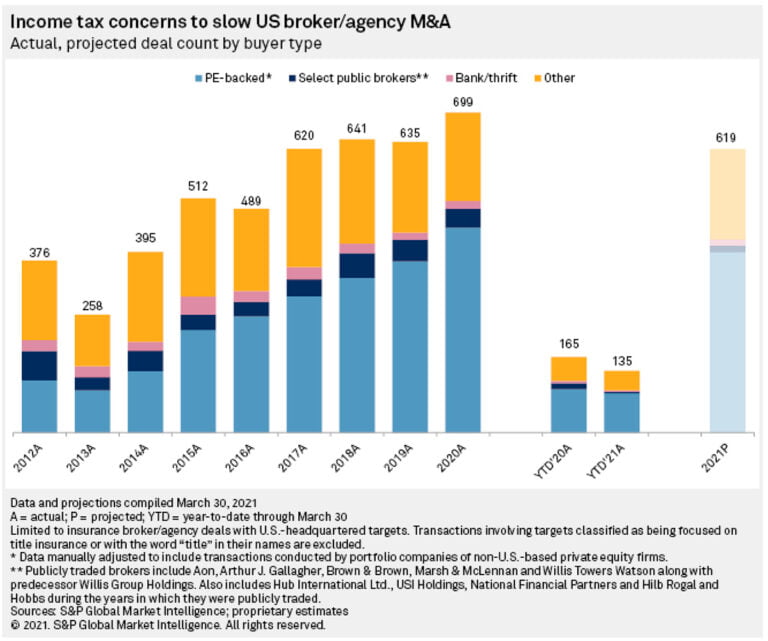 Consolidation of insurance carriers kicked into high gear in the first quarter of 2021, laying a foundation for what could become a record-approaching year.

Transactions involving U.S.- and/or Bermuda-based acquirers or targets during the first quarter produced an aggregate deal value of $21.16 billion, exceeding the full-year tallies from each of 2019 and 2020. Insurance carrier M&A activity seems poised to at least double in 2021 and could mark one of the strongest years in the last quarter-century.

The future independence of The Hartford Financial Services Group Inc. following Chubb Ltd.'s unsolicited offer to acquire the property and casualty and employee benefits stalwart will have much to say about the shape of the trendline. So, too, will be the means by which American International Group Inc. chooses to execute a planned separation of its life and retirement business after management indicated that they were open to a private sale of a 19.9% stake in the business in addition to a prospective initial public offering. 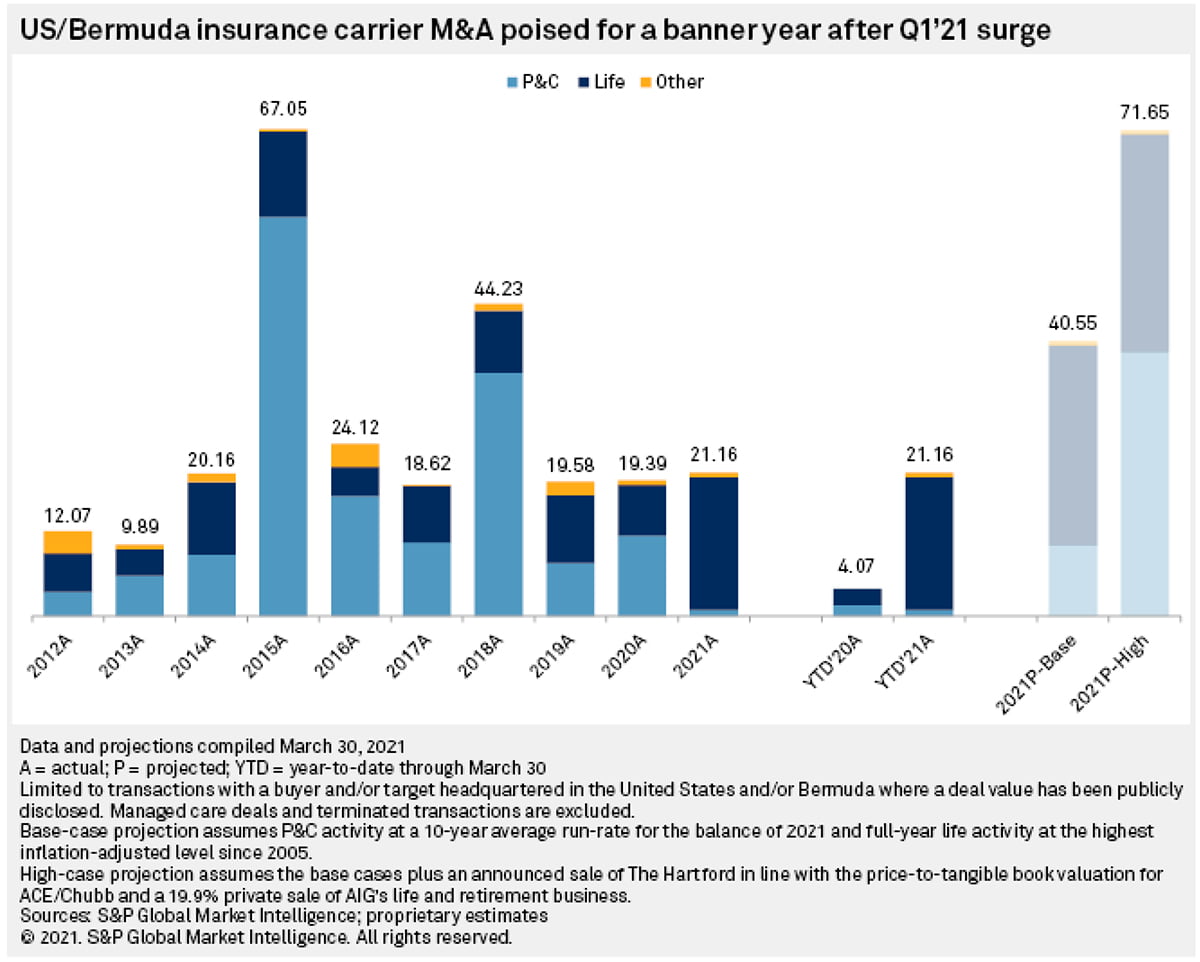 Our base-case scenario, which assumes a sale of The Hartford does not proceed and AIG opts for a life and retirement IPO, calls for 2021 insurance carrier M&A deal value of $40.55 billion in the aggregate, which would represent a 109.1% increase from 2020. In a scenario where The Hartford ultimately agrees to a sale later in 2021 and AIG finds a partner to invest in the life and retirement business, we estimate that aggregate deal value could reach $71.65 billion — an increase of 269.5% from 2020 to a level that has only been surpassed twice in at least the past 24 years on an inflationadjusted basis.

Even in the absence of additional dealmaking, the planned separations of two market-leading franchises in the AIG life and retirement business and Jackson Financial Inc. from their current parents would have made 2021 something of a transformational year for the U.S. life and annuity business. Jackson National Life Insurance Company and AIG ranked as the top two U.S. sellers of individual annuities in 2020, according to LIMRA's Secure Retirement Institute.

But the combination of a continued push by alternative asset managers to establish or grow their life and annuity footholds, a renewed emphasis among potential sellers on addressing large in-force blocks of business in a low-interest rate environment, and the emergence of new acquirers, has triggered a level of dealmaking in the sector that has not been seen for upwards of two decades.

Our base-case projection for the life, annuity and accident and health sector for an aggregate deal value of $29.44 billion would match the inflation-adjusted total for 2005 when MetLife, Inc. agreed to acquire the Travelers Life & Annuity business from Citigroup Inc. and Lincoln National Corp. inked its deal for Jefferson-Pilot Corp. Our high-case scenario, which assumes a private sale of a minority stake in the AIG life and retirement business, would put the full-year 2021 tally for the sector at $32.06 billion. Not since 2001, when AIG beat out Jackson parent Prudential PLC in a race to acquire American General Corp., has aggregate deal value in the sector ascended to a higher point.

Driven by Apollo Global Management Inc.'s $11.05 billion March agreement to acquire Athene Holding Ltd., deal value for life, annuity and accident and health targets surged to $19.59 billion in the first quarter. There had been less than $15 billion in such activity on an inflation-adjusted basis in the first quarters of the previous 10 years, combined. The last time deal activity in the sector hit a higher point for a full calendar year was in 2010, fueled by MetLife's $15.55 billion agreement to acquire American Life Insurance Co. (DE) as part of a series of post-global financial crisis divestitures by AIG.

The transaction signifies an increased focus on the insurance business by Blackstone, which joins peers such as Apollo, KKR & Co. Inc., Carlyle Group Inc. and Ares Management Corp. in using M&A to acquire insurance carriers.

Nowhere For P&C To Go But Up

In stark contrast to the life sector, deal value for P&C carrier transactions fell to its lowest point for a first quarter since 2013 at just $923.5 million. But slow starts have not necessarily been indicative of sluggish years. Only $1.60 billion of the $11.86 billion in full-year 2020 activity hit during the first three months of the year, for example.

Our base case for 2021 P&C deal value of $10.47 billion adds the median inflation-adjusted activity for the final three quarters of the previous 10 years to the first quarter's announced total. Our high case for $38.94 billion in activity assumes a sale of The Hartford at a price that approximates the tangible book multiple that ACE Ltd. agreed to pay in its 2016 acquisition of Chubb Corp. as outlined in a 2015 Guggenheim Securities fairness opinion. That opinion put the price-to tangible book value per share ratio at 1.84x and 1.87x using two sets of pre-announcement trading data for the target's shares, as we selected the midpoint of the range.

The Hartford is best known for its commercial lines business, but also maintains significant operations in group benefits and personal lines. The latter business emerged as the focus of the largest deals in 2020, highlighted by Allstate's agreement to acquire National General Holdings Corp. and Zurich Insurance Group AG's agreement to buy the MetLife home and auto segment.

After a record year of broker/agency consolidation as measured by the number of transactions involving U.S. targets, activity slowed by 18.2% on a year-over-year basis in the first quarter through March 30.

Comparisons in the second quarter will get markedly easier given the dramatic slowdown in activity in April and May 2020 as buyers and sellers, alike, adjusted to the pandemic.

With private equity-backed buyers still on the prowl for acquisitions, we anticipate that full-year activity in the sector will top 600 transactions for a fifth consecutive year. But our 2021 projection, which currently anticipates a decline of approximately 11.4% from 2020's total of 699 transactions, is contingent upon President Joe Biden's forthcoming plan to revise the U.S. tax code.

Biden announced a proposal on March 31 to increase the corporate tax rate to 28% from 21% but indicated he would be "putting forward additional ideas in the coming weeks" pertaining to individuals.

Anticipation that a Biden administration and a Democratic Congress would raise the top individual tax bracket led a surge of broker/agency dealmaking in December 2020. Whether history repeats itself in 2021 may ultimately depend on the contents, timing and legislative manifestation of those ideas. 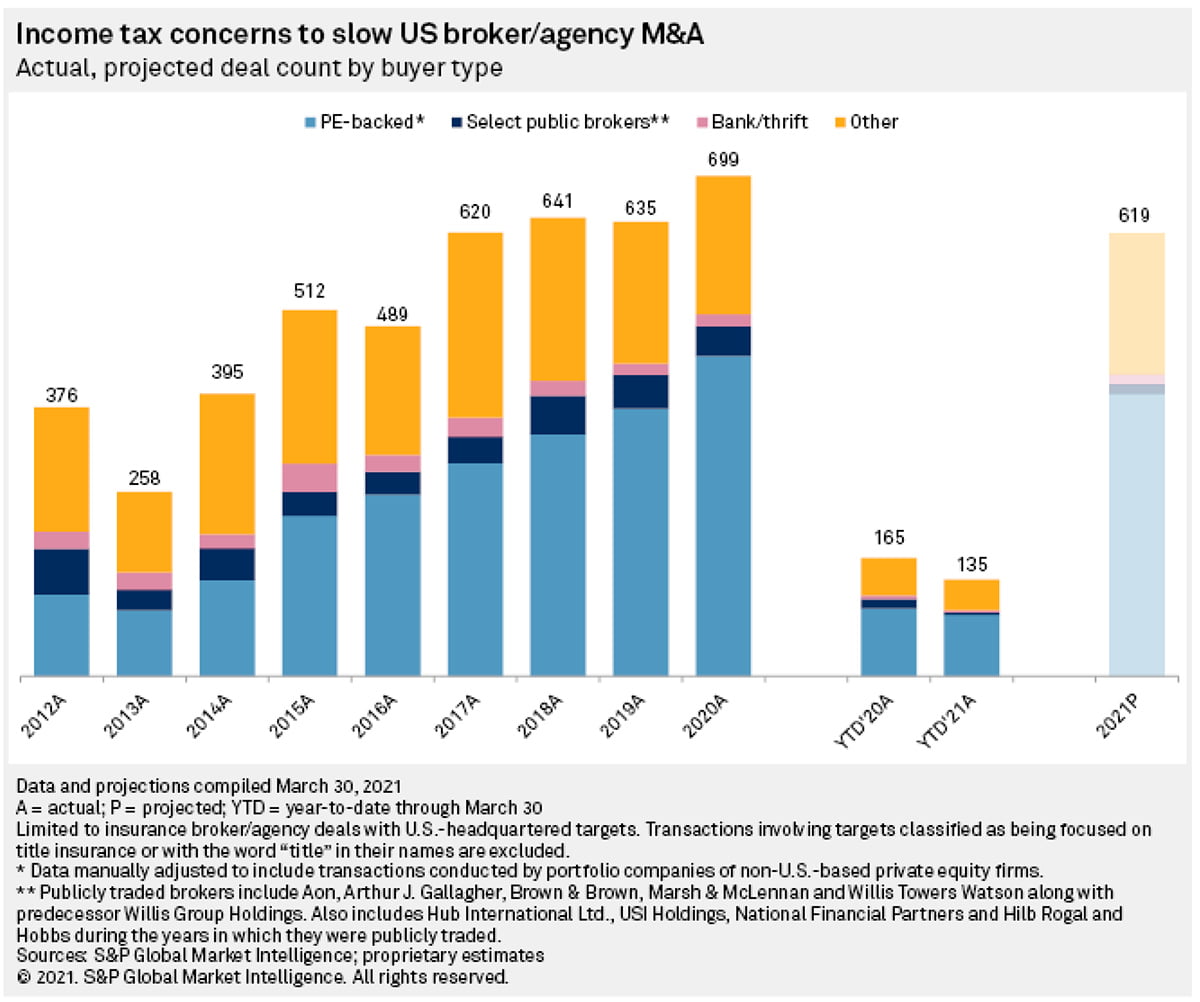