Premium smartphones are getting more and more expensive, but you don’t have to spend a thousand bucks to enjoy the top-quality camera or other premium features. Devices like Google Pixel 3a and Motorola’s new Moto One Vision have brought high-end features to mid-range smartphones. They both offer an excellent balance between pricing and features. The Moto One Vision competes directly with Google’s Pixel 3a. Let’s check out how the two devices stack up in terms of features, camera, and pricing.

Google Pixel 3a vs Moto One Vision: Design

The Pixel 3a lacks an IP rating for water resistance, though it does come with splash and dust resistance. It retains the 3.5mm headphone jack and uses USB-C port for charging. Google has launched the Pixel 3a in Just Black, Clearly White, and Purplish color options.

Motorola has introduced a new design language with One Vision instead of copying the iPhones. It has a curved glass back with rounded edges and a gradient finish. The display is wrapped around a plastic shell. The device comes in two different color options of Bronze Gradient and Sapphire Gradient. It has a vertically-aligned dual camera setup in the top-left corner of the back panel. The device also features a rear-mounted fingerprint sensor for security.

The Moto One Vision has a hole-punch in the top-left corner of the screen to accommodate the selfie camera. The entire purpose of hole-punch cameras is the help reduce the bezels. But One Vision still has noticeable bezels at the top and a chin at the bottom. The device comes with an oleophobic coating, which makes it splash-proof with an IP52 rating.

The Motorola phone has a 3.5mm headphone jack at the top. It uses a USB-C port for charging. At the bottom of the phone is a single speaker. The One Vision has a relatively taller form factor similar to Sony’s Xperia 1. It measures 160.1 x 71.2 x 8.7 mm and weighs 180g.

The Pixel 3a has a smaller but better display than the Moto One Vision. Google has used a 5.6-inch gOLED display with Full HD+ resolution of 2280 x 1080 pixels and an 18.5:9 aspect ratio. The OLED panels are superior to their LCD counterparts, delivering more vibrant colors. The Pixel 3a uses Asahi’s Dragon Trail Glass instead of Corning Gorilla Glass for protection. Thanks to thick bezels, it has a relatively lower 74% screen-to-body ratio.

The Moto One Vision packs a larger 6.3-inch IPS LCD screen with Full HD+ resolution of 2520 x 1080p. It has a taller 21:9 aspect ratio and 431ppi of pixel density. The screen is protected by Corning’s Gorilla Glass 3. The 21:9 aspect ratio makes it ideal for watching videos on YouTube and Netflix. But there are only a small number of shows and movies that support the 21:9 aspect ratio.

Both handsets have mid-range specs, and they both are good enough for day-to-day tasks as well as some casual gaming. The Pixel 3a runs Qualcomm’s Snapdragon 670 processor with Adreno 615 graphics processor. It packs 4GB RAM and 64GB of storage. The device lacks a microSD card slot for external storage. Google offers unlimited free cloud storage of photos and videos via Google Photos, but not in their original resolution.

The Motorola One Vision is powered by Samsung’s octa-core Exynos 9609 chipset with Mali-G72 graphics processor. It packs 4GB RAM and a higher 128GB of internal storage. The One Vision also has a microSD card slot that allows users to expand storage by up to 512GB. It also offers dual-SIM functionality.

The One Vision packs a larger 3,500mAh battery, but it also has a bigger display to power. It comes with Motorola’s 15W TurboPower charger, which delivers 30% charge in 20 minutes and takes the battery from 0-100% in just 90 minutes. Just like Pixel 3a, it doesn’t support wireless charging.

Google’s software optimization ensures a smooth performance and experience on Pixel 3a. It runs the stock version of Android 9 Pie, bringing features like call screening that lets Google Assistant handle spam calls for you. The Moto One Vision is part of Google’s Android One program, meaning it also gets the stock version of Android 9 Pie with no bloatware.

Both Pixel 3a and One Vision will get timely software updates and security patches, and they both will be upgraded to Android Q later this year. However, Motorola’s phone comes pre-installed with the Moto app, which gives you access to Moto Actions and Moto Display. There is also the Moto Help app for troubleshooting. The One Vision users can launch Google Assistant with a long press of the home button.

The Pixel 3a has one of the world’s best smartphone cameras because it features the same camera that Google has used on the premium Pixel 3. Camera testing firm DxOMark has given it a score of 101, same as Apple’s iPhone XR.

So, you can expect the same world-class photography on the new phone in both bright light and low-light situations. It sports a single 12.2MP lens on the back with OIS, EIS, and f/1.8 aperture. On the front, it has an 8MP selfie camera with f/2.0 aperture. The device is capable of recording 4K videos at 30fps, Full HD videos at 120fps, and 720p videos at 240fps.

The One Vision has a dual camera setup on the back. It consists of a 48MP primary lens with f/1.7 aperture and OIS, and a 5MP depth sensor with f/2.4 aperture. The primary lens uses pixel binning technology to enhance image quality. It doesn’t give you 48MP images. Instead, it merges four pixels into one to give you a superior 12MP photo. The pixel binning technology delivers brighter, more detailed images. For selfies, it has an impressive 25MP camera.

Motorola has packed its device with some cool camera features such as portrait mode, slo-mo video recording, live filters, Spot Color, Night Vision, and more. The Spot Color feature lets you highlight one specific color in a photo and turn the rest of the image black and white. It works on the selfie camera as well. The One Vision is capable of recording 4K videos at 30fps and Full HD videos at 60fps.

The Moto One Vision isn’t officially available in the US yet. But the unlocked international version of the device is up for sale on Walmart, Amazon, and eBay, and other sites for around $380.

The Moto One Vision has a better and more attractive design with gradient finish, a taller display, and more storage. It runs the stock Android just like Pixel 3a. But if you like taking pictures with your phone, but Pixel 3a is the phone you’d want to buy. 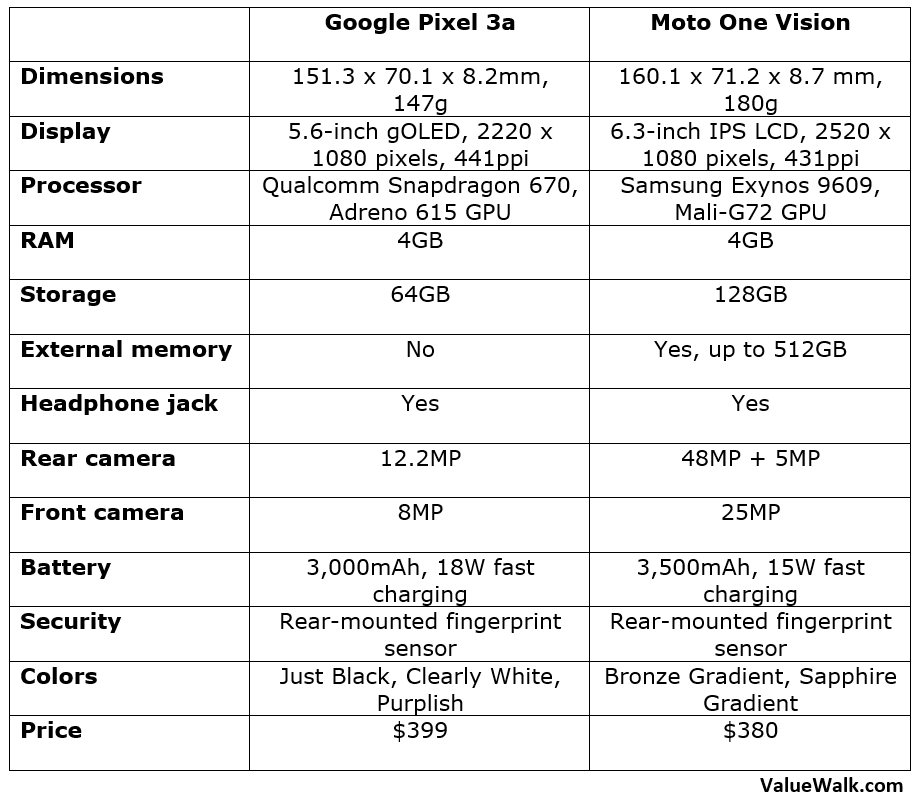