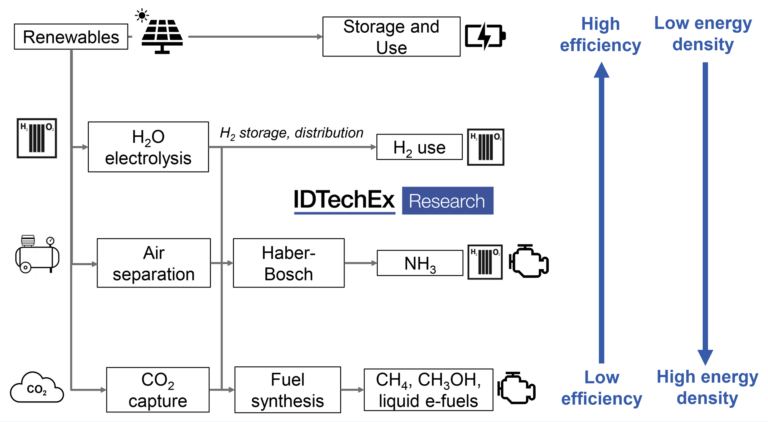 Growth in global energy consumption has caused CO2 and greenhouse gas (GHG) emissions to rise, in turn causing an increase in average global temperatures. The combustion of fossil fuels including coal, oil, and natural gas, has been a key driver behind this, providing the underlying driver for the production and use of non-fossil alternative fuels that can help reduce emissions.

Electrification Is The Key

While progress is being made in the power sector with the integration of renewable power sources, and in light-duty on-road transport with battery electric vehicles, other sectors have been slower to adopt low-carbon technologies. See the report “Electric Vehicles: Land, Sea and Air 2021-2041” for IDTechEx’s latest research on electric vehicles. Electrification is key to any low-carbon strategy, providing the most efficient means to utilize renewable power sources. However, complete electrification is unlikely to be feasible for areas such as heating, shipping, or aviation. Taking aviation as an example, this can be easily understood given the much lower energy density of battery technology compared to kerosene (a major component of jet-fuel). Instead, sustainable gaseous and liquid fuels are going to be needed, with two main routes available: biofuels and synthetic electro-fuels (e-fuels), including green hydrogen. 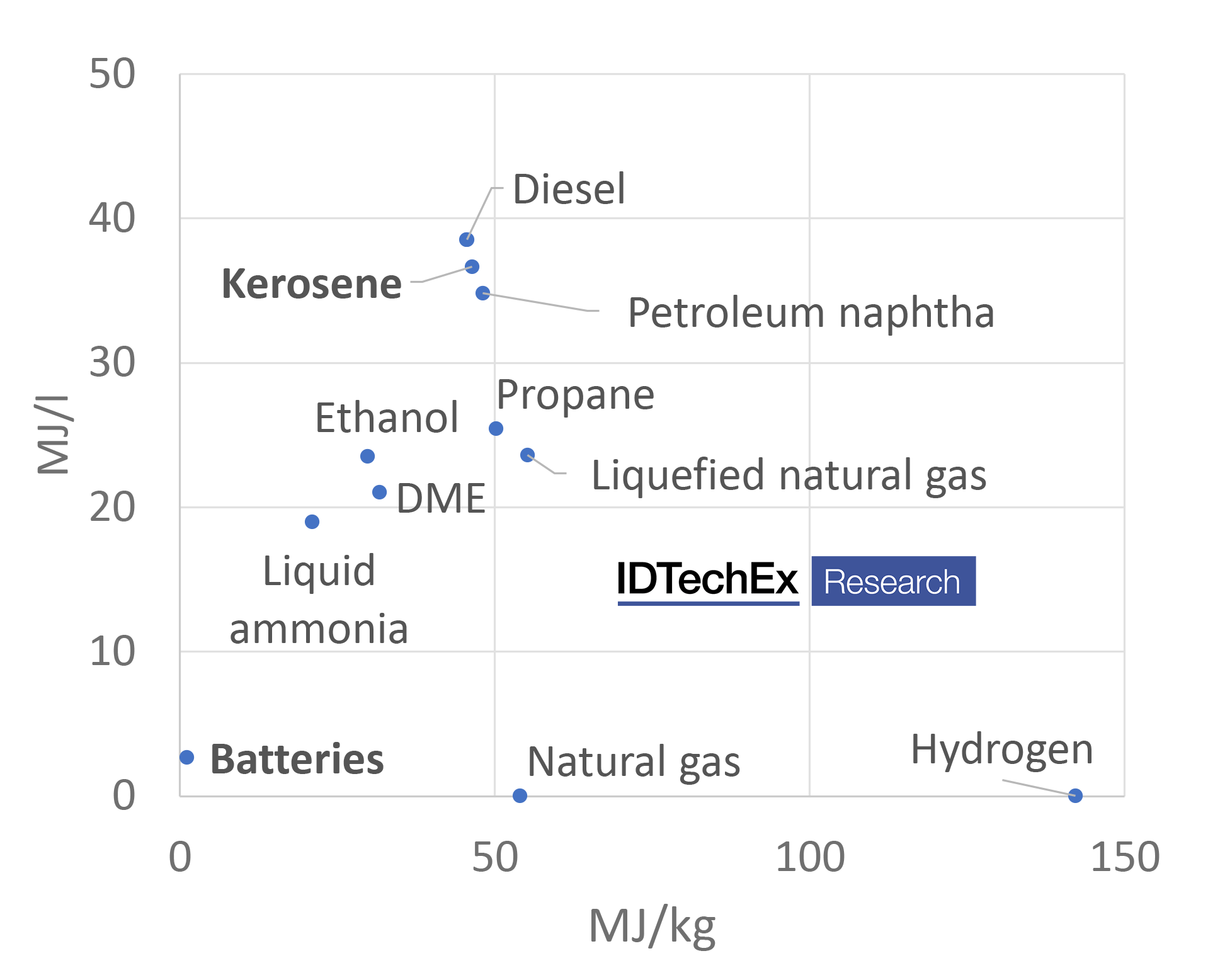 Biofuels are widely used today, primarily by blending bioethanol and biodiesel for on-road transport fuels. To date, food crops have been the major feedstock. Sugars can be fermented to produce ethanol, while transesterification of vegetable oils produces biodiesel. Longer-term, more advanced feedstocks from cellulosic or woody feedstocks, or from waste materials, can help limit the impact on land use, competition with food production, and minimize lifecycle emissions from biofuel production. Nevertheless, concerns remain over the true sustainability biofuels offer and limits on feedstock availability.

E-Fuels Can Be An Alternative

An alternative to biofuels may therefore be needed and electro-fuels (e-fuels or synthetic e-fuels) could provide an alternative means to produce drop-in liquid and gaseous fuels. Electro-fuels, or e-fuels, consist of fuels that are produced using hydrogen from water electrolysis, referring to the process rather than the fuel itself, and incorporates the terms power-to-X, X being a gaseous or liquid product. Hydrogen itself can be considered an e-fuel, along with methane and ammonia as other power-to-gas fuels. However, H2 in particular is difficult to store and transport and, even liquid H2, has a comparatively low volumetric energy density. As such, liquid fuels are likely to be preferred for hard to abate transport sectors. Drop-in liquid fuels, such as gasoline, diesel, or jet fuel (power-to-liquid), can be obtained by combining hydrogen with a carbon source, such as from direct-air-capture (DAC). While there are various routes to produce a final e-fuel, many will rely on syngas, a combination of H2 + CO, as an intermediate. Syngas can be produced through the combination of H2 and CO2 in a water gas shift reactor and further processed into drop-in fuels, though it is also possible to produce syngas directly, for example, though co-electrolysis of CO2 and steam. Methanol may be another important intermediate, produced either from syngas or again, directly via electrochemical or thermochemical routes, to be used as a fuel additive or as a precursor to a variety of fuels and chemicals. See the brand new IDTechEx report “Sustainable Alternative Fuels: 2021-2031”. 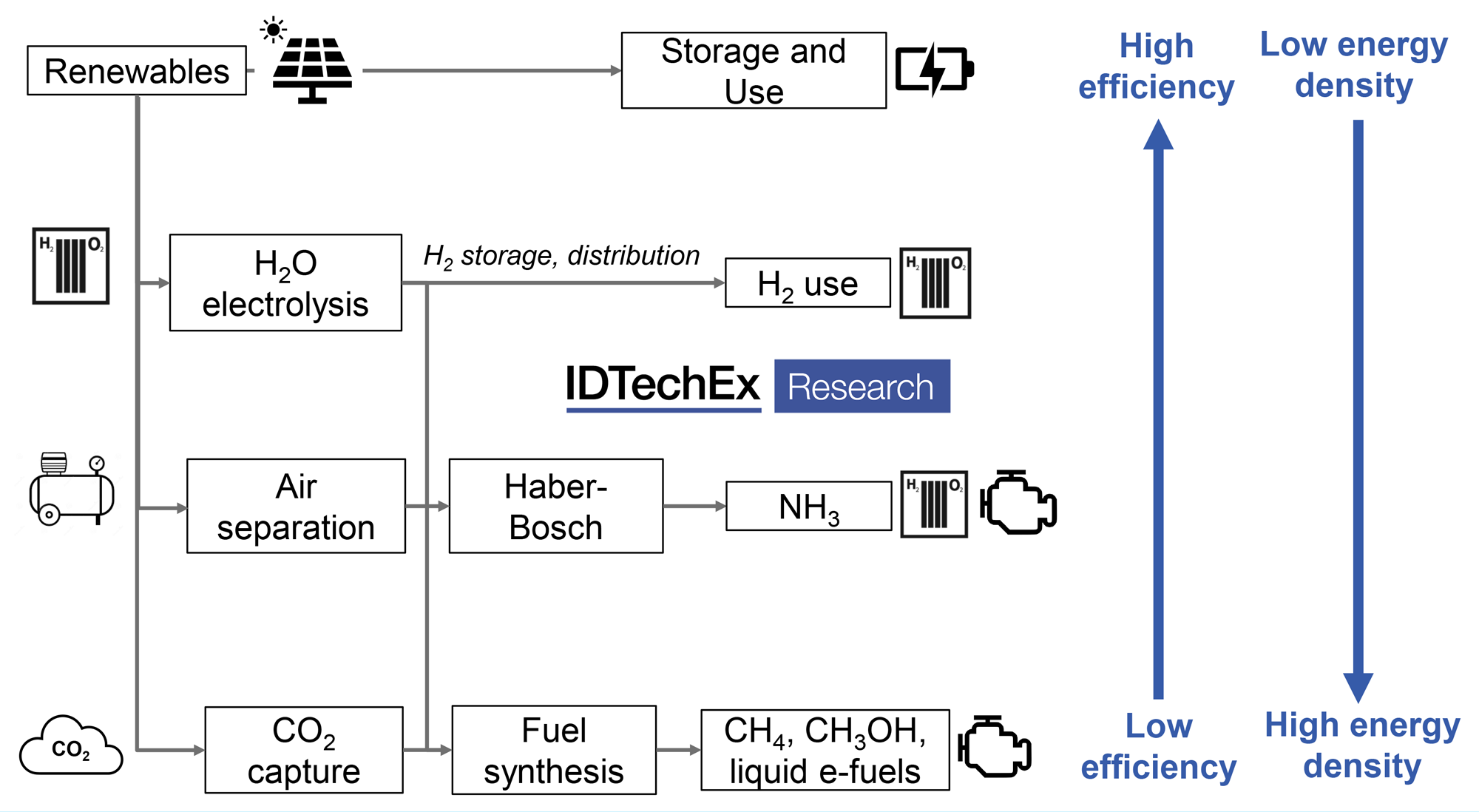 Conversion from hydrogen to fuels such as methane or liquid fuels will be beneficial by allowing easier transport and distribution and their ability to act as a drop-in replacements to current fossil fuels. However, e-fuel synthesis presents additional process steps and energy consumption requirements, resulting in high capital costs and inefficient use of input energy compared to the direct use of electrical power, in addition to the relatively low efficiency of the fuel combustion itself e.g., an ICE will be only 20-30% efficient compared to a battery at >90% or a fuel cell, which can operate at efficiencies above 60%. This concern is exacerbated if the carbon source stems from CO2 captured from DAC, which provides the greatest flexibility in plant location but also results in greater energy consumption compared to point-source-capture from industrial sources.

Irrespective of the route taken to e-fuel production, electrolyzer technology will be key, not only for H2 production but potentially as a means for CO2 reduction and production of syngas or multi-carbon products. However, electrolyzers are currently expensive whilst the economic case for both H2 and e-fuel production are likely to be entirely dependent on low-cost electricity. As such, electrolyzers used for e-fuel production may be reliant on using low-cost power at periods of low demand or excess production i.e., electrolyzers will be operated dynamically. Indeed, the possibility of production being able to help integrate variable renewable power by operating at periods of high production/low demand is often cited as a benefit of e-fuels. Currently though, electrolyzers are generally operated under relatively steady-state conditions. Operating dynamically can lead to lower efficiencies and higher levels of degradation, reducing the operating lifetime of the electrolyzer stack. There are various reasons for this, for example, high voltages can increase corrosion, while dynamic operation can cause pressure, temperature, or potential differentials, which can induce mechanical stresses and accelerate catalyst dissolution and degradation. Operation of an electrolyzer system of course also requires simultaneous operation of various pumps, compressors, heating units, and gas separators, all of which could limit the level of dynamic operation that is possible. The above points are particularly true for high temperature solid-oxide-electrolysis-cells (SOEC), which need to be heated to >650 °C, and alkaline electrolyzers. While proton-exchange-membrane (PEM) electrolyzers are expected to be better suited to dynamic operation, cost reduction will still be needed and if catalyst loadings are reduced as a way to do this, durability may again be impacted. Reliance on variable power will also lead to lower utilization factors, i.e., operating below full capacity, leading to higher lifetime costs. For more on electrolyzer technology for e-fuel production, see IDTechEx’s latest report “Sustainable Alternative Fuels: 2021-2031”.

In short, e-fuels offer the possibility of distributed fuel production reliant only on the supply of electricity. However, improvements to electrolyzer technology are likely to be necessary to enable them to truly use low-cost, surplus renewable power. There are various issues that need to be addressed before e-fuels can offer a significant contribution to global energy needs but they are one of only a limited number of options for decarbonizing hard-to-abate sectors, ensuring development is likely to continue.

IDTechEx provides research on a range of emerging technologies and markets, including e-fuels, the hydrogen economy, battery technology, and electric vehicles. For the full portfolio of Electric Vehicle and Energy Storage market research available from IDTechEx, please visit www.IDTechEx.com/Research.