With Biden signing an executive order to strengthen cybersecurity after Homeland Security and the NSA issuing warnings that Russian hackers are targeting cyber vulnerabilities in the US, and hackers shutting down the Colonial oil pipeline in a ransomware attack, here is a look at which states are most vulnerable to cybercrime.

A two-factor authentication firm has analyzed the FBI’s Internet Crime Report to reveal which states are losing the most money per victim of cybercrime.

One of the world’s leading two-factor authentication firms has analyzed an FBI Internet Crime Report to reveal which states have the highest chances of cyber attacks happening. The platform examined the number of cybercrimes committed in each state/district in the US and then revealed what that number was per 100,000 living in each state. California was revealed as the worst overall state for cybercrimes, while Missouri had the highest average cost per victim at $63,549, 17 times higher than the lowest state, Montana (£3,762 per victim).

A world-leading two-factor-authentication platform has revealed which states have the highest chances of cyber-attacks happening.

The platform, Rublon analyzed the FBI’s 2020 Internet Crime Report* to reveal which states people were most likely to fall victim to cybercrimes, which states had the most expensive crimes per victims and which states were the worst overall.

The research was carried out after Rublon noted a large increase in Google searches around ‘phishing’, ‘fraud’ and ‘malware’ in the last 12 months.

In 2020 cyber attacks cost Americans more than $4.2 billion and 160,000 people were victims of cyber criminals. 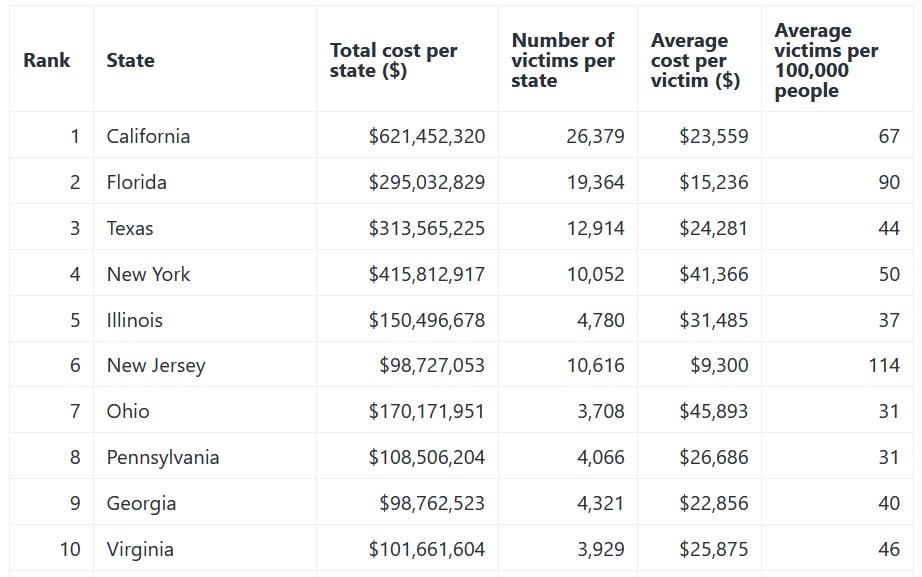 The 5 states that are the worst overall for cybercrimes

(highest combination of victims and cost)

To find out the full list of states and how each one has been impacted by cybercrimes, visit: https://rublon.com/

The most common type of cyber attack in 2020 were phishing scams (241,342 victims), which occurred more than twice as much as the next common attack, non-payment (108,869 victims). Extortion was the third most popular crime (76,741 victims) followed by personal data breaches (45,330). While over 60s were the most common targets for cyber crimes (23% of all victims) and lost $966 million last year.

Rublon is a user authentication platform that enables companies and consumers to protect their information using multi-factor authentication (MFA) for logins to networks, servers and applications. Users approve logins by tapping a security key or a button on their mobile phone, after entering credentials. Deploying Rublon MFA helps organizations to comply with data protection regulations like HIPAA and GDPR. Rublon's mission is to ensure that all people are able to keep their data safely protected online, without worry or stress.

“We all spent a lot more time indoors and online last year, and unfortunately as you can see from the FBI report, criminals took full advantage of this situation – extorting more than $4.2 billion from US citizens through cyber-attacks. We decided to break this research down into states and analyze where cyber-attacks were most likely to occur, and in which states victims were losing the most money.

“Luckily, there are plenty of resources out there to educate and protect people against these crimes from happening and hopefully by highlighting where and who is most at risk, these numbers can decrease instead of increase by the end of 2021.”