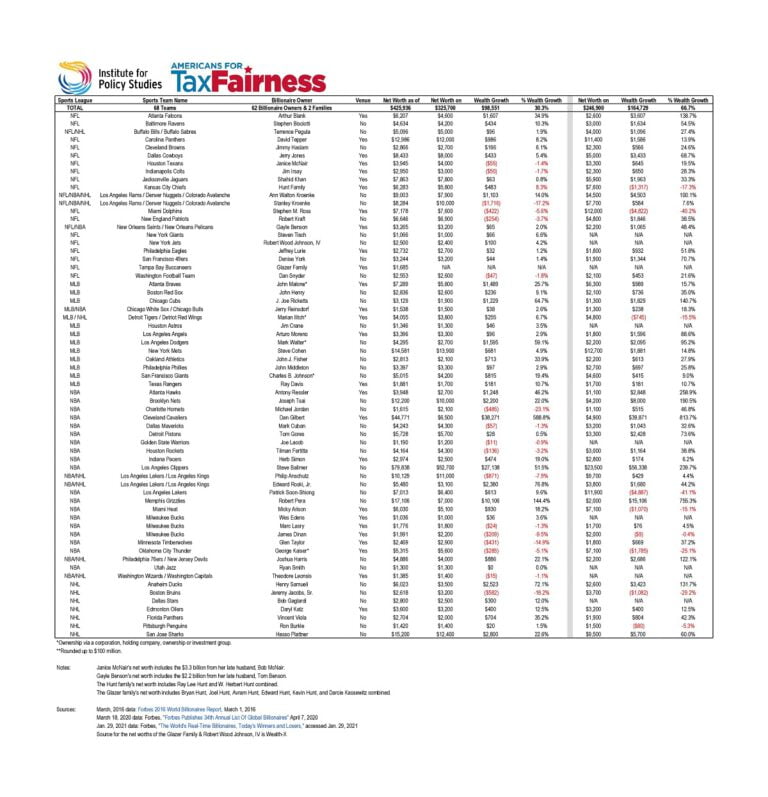 In Midst of Pandemic That Devastated Society, Including Sports, Total Wealth of 64 Billionaire Sports Barons Shot Up By $98.5 Billion, or over 30%

Taxpayer Subsidies for Stadiums of 26 Billionaire Team Owners Have Totaled $9 Billion Since 1990, with most in last decade

Billionaire Sports Barons Are The Winners Of The COVID-Ravaged Economy

Washington, D.C.—We won’t know the winner of this year’s Super Bowl till Sunday, but we already know the big winners in our COVID-ravaged economy include dozens of billionaire sports barons.

On the eve of the big game and after 10-plus months of the pandemic, 64 billionaire owners of major league sports franchises—including the AFC champion Kansas City Chiefs’ Hunt family and the NFC champion Tampa Bay Buccaneers’ Glazer family—have enjoyed a $98.5 billion rise in their collective net worth, a 30 percent increase, even as millions of fans have fallen ill, lost jobs, neared eviction, gone hungry and died due to the coronavirus.

The 64 billionaires, who together own or co-own 68 professional sports franchises, had a combined wealth of $426 billion on January 29, 2021, up from $325 billion on March 18, 2020, roughly since the start of the pandemic lockdowns, according to a new analysis by the Institute for Policy Studies (IPS) and Americans for Tax Fairness (ATF), analyzing data from Forbes and Wealth-X. [Note: The increase in total billionaire wealth from March to January was $101 billion, but has been adjusted to $98.5 billion because two billionaires only reached that status in January 2021.]

The sports billionaires’ private gain in the midst of so much public pain is particularly galling since many of their franchises have been the beneficiaries of taxpayer handouts. Over the past several decades, according to data maintained by Field of Schemes, 28 pro sports teams owned by 26 billionaires have received $9 billion in taxpayer subsidies (see Table 2 here) to help build or update stadiums and arenas and make other investments billionaires could presumably afford on their own. These publicly subsidized team owners have seen their wealth increase $45 billion since mid-March. 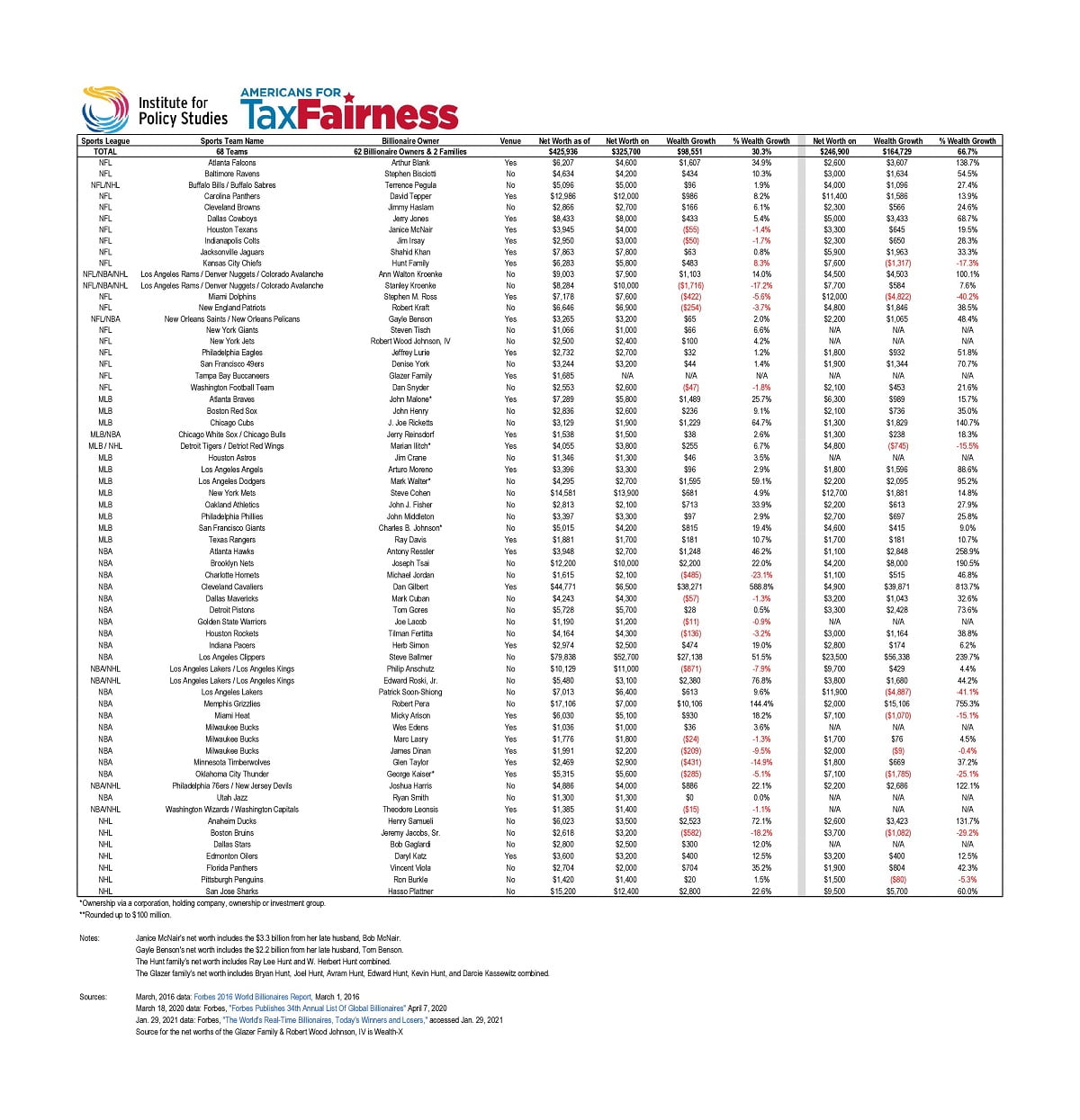 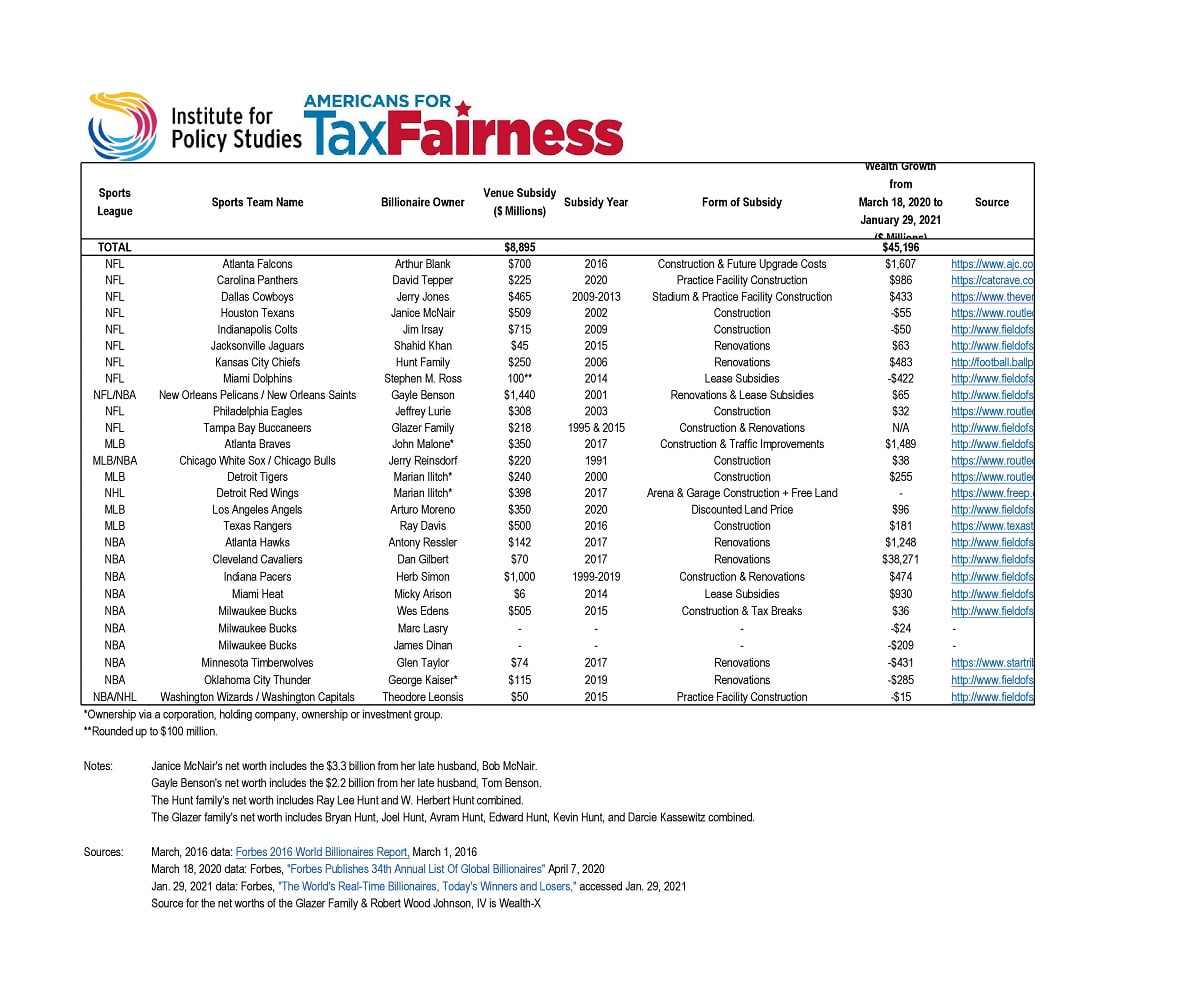 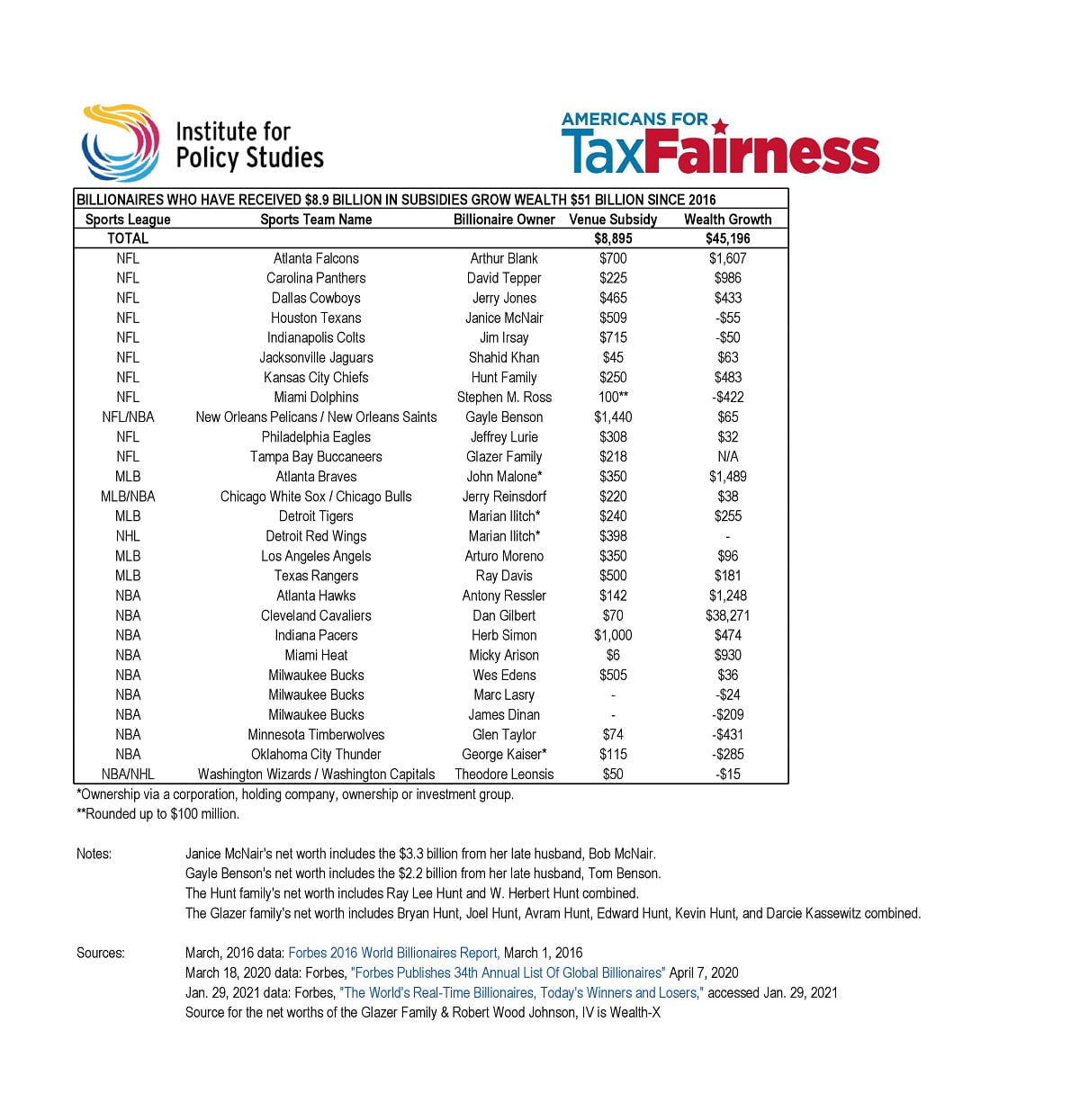 For the full report go to Pandemic Super Bowl 2021: Billionaires Win, We Lose.

A Spike In Wealth

Over the past five years - when a lot of those sweetheart tax deals were cut - the collective wealth of sports billionaires shot up $165 billion, or 66.7 percent. Their combined wealth of $247 billion in March 2016 had grown to $426 billion by January 29 of this year.

The $98.5 billion wealth gain by 64 sports franchise billionaires since March 2020 could pay for:

March 18 is used as the unofficial beginning of the pandemic because by then most federal and state economic restrictions responding to the virus were in place. Moreover, March 18 was also the date on which Forbes estimated billionaire wealth for the 2020 version of its annual report. That report provided a detailed baseline that ATF and IPS have been comparing periodically with real-time data from the Forbes website. [See past reports here] This methodology has been favorably reviewed by PolitiFact.

Last March is when the nation’s emergency response to the deadly virus threw professional sports along with the rest of society into turmoil. Thousands of low-paid stadium and arena workers lost their jobs as sports seasons were cancelled and curtailed.

The Dominance Of A National Dynasty

Though only one of their teams will lift the Lombardi Trophy as Super Bowl champs this year, both the Chiefs’ Hunt family - specifically, Ray Lee Hunt and W. Herbert Hunt - and the Bucs’ Glazer family will continue their long reigns among the nation’s biggest economic winners. The Hunts’ net worth is estimated by Forbes at $6.3 billion, up $482 million during the COVID crisis. Their Chiefs received $250 million in taxpayer subsidies for stadium renovations in 2006.

The Buc’s Glazer family is worth an estimated $1.7 billion, according to Wealth-X. Taxpayers provided a total of $218 million in subsidies for construction and renovation of the Buccaneer stadium in 1998 and 2015.

Sixty U.S. billionaires—roughly one in ten of the country’s 661 total billionaires—own one or more major league professional sports teams in the National Football League (NFL), National Basketball Association (NBA), Major League Baseball (MBL), and National Hockey League (NHL). Three of the billionaire team owners are Canadian and one is German, for a total of 64.

“These billionaire sports barons have seen their wealth rise as their fans lose their lives, livelihoods, health and wealth,” said Chuck Collins, director of the Institute for Policy Studies, Program on Inequality.  “As a country, we should be investigating pandemic profiteering and taxing windfall gains during these extraordinary times.”

“The Super Bowl brings the whole nation together, but we have not come together as a country to beat the pandemic,” said Americans for Tax Fairness executive director Frank Clemente. “Billionaire sports owners have continued their long winning streak of ever-growing fortunes while fans at home are losing their lives and livelihoods. Real team work would require billionaires to pay their fair share of taxes so we can get the whole U.S. back to its winning ways.”

“Every year, wealthy sports team owners rake in more than two billion dollars in taxpayer subsidies for new stadiums and arenas that, according to innumerable economic studies, provide zero measurable economic benefit to the public,” said Neil DeMause, co-author of Field of Schemes: How the Great Stadium Swindle Turns Public Money Into Private Profit, and editor of the stadium news site, fieldofschemes.com. “Letting billionaire owners socialize their costs and privatize their profits has allowed the rich to get richer, while starving local governments of revenue to pay for schools and other genuine public needs.”

Tax reform that ensures the wealthy pay their fair share—the principle President Biden’s tax plan is built on—would transform a good chunk of those huge billionaire gains into public revenue to help heal a hurting nation. But getting at that big boost in billionaire fortunes is not as simple as raising tax rates: tax rules let the rich delay, diminish and even ultimately avoid any tax on the growth in their wealth. What’s needed is structural change to how wealth is taxed.

The most direct approach is an annual wealth tax on the biggest fortunes, proposed by Senators Elizabeth Warren and Bernie Sanders, among others. Another option is the annual taxation of investment gains on stocks and other tradable assets, an idea advanced by the new Senate Finance Committee chair, Ron Wyden. Even under the current discounted tax rates for investment income, if Wyden’s plan had been in effect in 2020 America’s billionaire sports owners would be paying billions of dollars in extra taxes this spring thanks to their gargantuan pandemic profits last year. Another needed reform is to significantly strengthen the estate tax so that the riches accumulated by these ultra-wealthy sports franchise owners pay their fair share of taxes when these dynasties get passed onto their heirs.

Americans for Tax Fairness is a diverse campaign of more than 420 national, state and local endorsing organizations united in support of a fair tax system that works for all Americans. It has come together based on the belief that the country needs comprehensive, progressive tax reform that results in greater revenue to meet our growing needs.

The Institute for Policy Studies is a multi-issue research center that has conducted ground-breaking research on inequality for more than 20 years. The IPS Program on Inequality and the Common Good, and the Inequality.org website, provide research, advocacy and policy development on issues related to economic inequality.