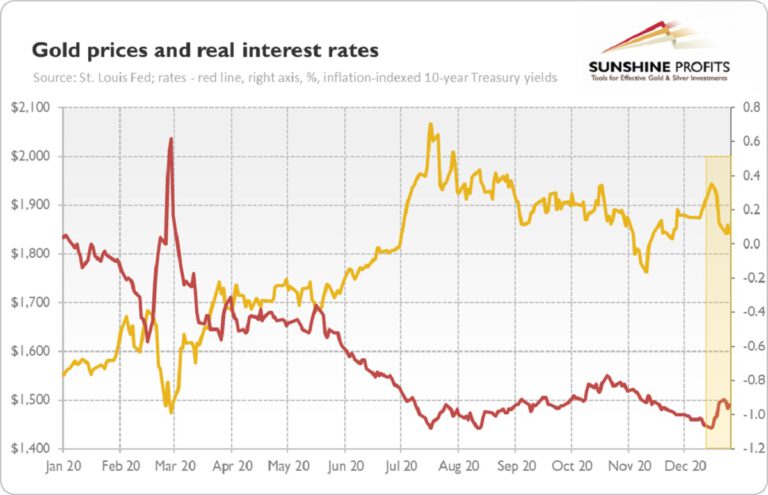 Joe Biden’s election as president and his first economic proposal proved negative for gold prices, but the presidency might yet turn positive.

What Does The New Presidency Mean For The Market?

The 46 th presidency of the United States has officially begun. What does that mean for the U.S. economy, politics and the precious metals market?

Let’s start by noting that this will not be an easy presidency. The epidemic in the U.S. is raging, the economy is in recession , and public debt is ballooning. Foreign relations are strained while the nation is strongly polarized, as the recent riots clearly showed. So, Biden will have to face many problems, with few assets .

First, as he turned 78 in November, Biden has been the oldest person ever sworn in as U.S. president. Second, his political capital is rather weak, as the 2020 election is more about Trump’s loss than Biden’s victory. In other words, many of his voters supported Biden not because of his merits but only because they opposed Trump. Third, he will have the smallest congressional majorities in several years. Democrats have only ten more seats than Republicans in the House and the same number of seats in the Senate. And even with Kamala Harris as a tie-breaker, Biden could not lose a single Democrat senator’s vote to pass any legislation in Senate.

Biden's Political Position Seems To Be Negative For Gold Prices

On the one hand, Biden’s tough political position seems to be negative for gold prices, as it lowers the odds of implementing the most radical, leftist political agenda. On the other hand, Biden’s difficulties also lower the chances of sound economic reforms, which is good news for the yellow metal. A divided Congress and Democratic Party with an old president at the helm, who has a weak personal base could result in political conflicts and stalemates which would prove positive for gold.

When it comes to economics, Biden has already presented his pandemic aid bill, worth of $1.9 trillion. The proposal includes direct payments of $1,400 to households, $400 per week in supplementary unemployment benefits through September, billions of dollars for struggling businesses, schools, and local governments, as well as funding that would accelerate vaccination and support other coronavirus containment efforts. Biden also wants to raise the minimum wage to $15 per hour, which will not appeal to Republicans. The big size of the package will also be disliked by the GOP.

The fact that Democrats have won the Georgia Senate runoffs, taking control over the Senate, increases the chances that Biden will implement his economic stimulus. The equity markets welcomed the idea of another large aid package, in contrast to bond investors who sell Treasuries, causing the yields to go up. The increase in real interest rates pushed gold prices down , as the chart below shows. 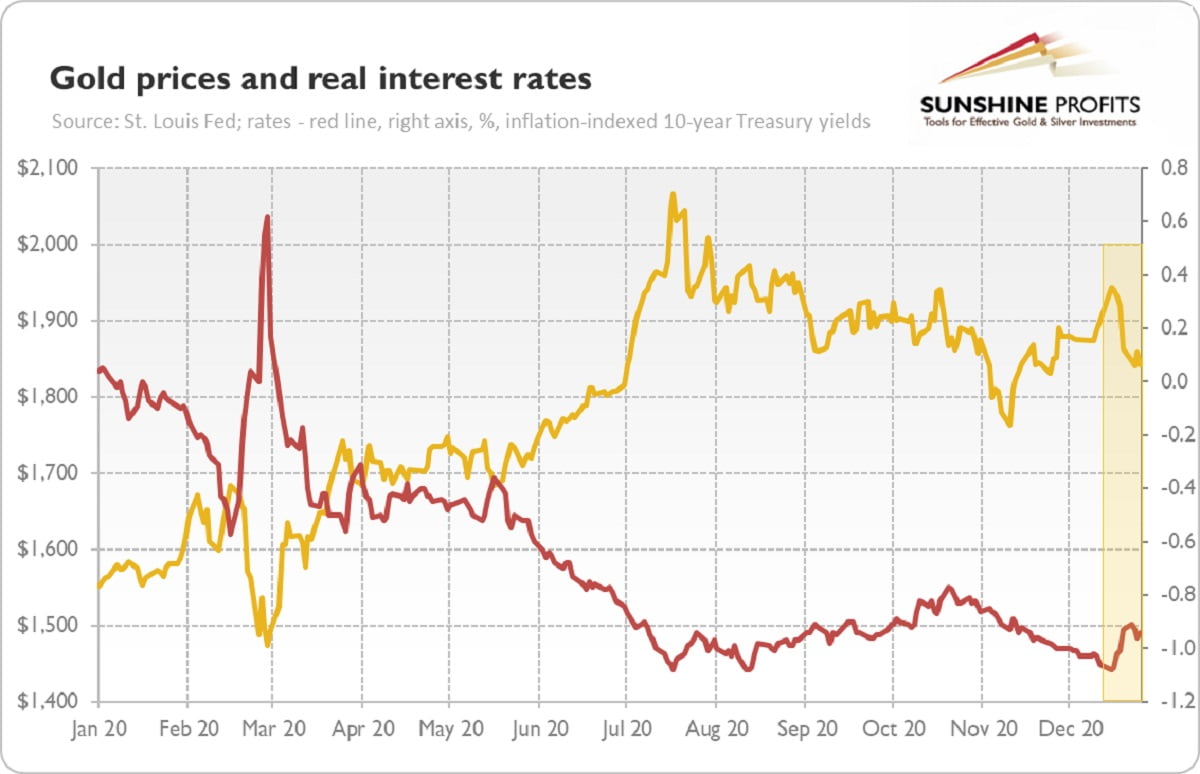 Investors Are Hoping For Acceleration In Economic Growth

It seems that investors liked the idea of big stimulus, hoping for acceleration in economic growth. However, printing more money (I know, the Treasury technically doesn’t print money – but it issues bonds which are to a large extent bought by the Fed ) and sending checks to people doesn’t increase economic output. Another problem is that the U.S. can’t run massive fiscal deficits forever and ever , hoping that interest rates will always stay low.

So, although Biden’s economic stimulus may add something to the GDP growth in the short-term, it will not fundamentally strengthen the economy. Quite the contrary, the massive increase in government spending and public debt (as well as in taxation) will probably hamper the long-term productivity growth and make the already fragile debt-based economic model even more fragile. What is really worrisome is that Biden doesn’t seem to care about U.S. indebtedness – he has already spoken strongly against deficit worries and hasn’t proposed any actions to reduce the debt – and plans to unveil the additional economic stimulus.

Hence, although gold declined initially in a response to Biden’s economic stimulus proposal, the new president could ultimately turn out to be positive for the yellow metal. After all, gold declined in the aftermath of the Lehman Brothers’ collapse , but it shined under Barack Obama’s first presidency. And Biden is likely to be even more fiscally irresponsible than Obama (or Trump), while the Fed under Powell is likely to even more monetarily irresponsible than under Bernanke (or Yellen ). Indeed, according to The Economist , Biden’s proposal is worth about nine percent of pre-crisis GDP, nearly twice the size of Obama’s aid package in the aftermath of the Great Recession . And, in contrast to previous crises, the Fed has announced the desire to overshoot its inflation target. All these factors should support gold prices in the long run.